Cutting the Legal Services Corporation from the federal budget would deny millions of people access to civil representation and disproportionately impact women. It wasn’t long after Sonota got married that her husband began to abuse her. After her second child was born in 2012, the violence accelerated; police were often called to the couple’s St. Louis, Missouri, home, and Sonota had to seek medical attention more than once. With a 1-year-old son and newborn daughter, Sonota knew she was in trouble. “I had a lack of support and I was in an abusive situation and I had two babies,” she told The Intercept. “I was just very overwhelmed and lost and needed some type of guidance and help to get into a safe place in my life for my kids.”

Sonota found that help at Legal Services of Eastern Missouri, a nonprofit legal aid organization that provides lawyers for low-income individuals navigating the civil justice system. For Sonota, that meant helping her to obtain a protective order against her husband, to file for divorce, and to secure child support for her children. Her legal aid attorney also helped her to get access to therapy, a cellphone for emergencies, and school supplies and Christmas presents for her children. The assistance made it possible for Sonota to get her life back on track — into housing and back into school, where she obtained an associate degree in business management and accounting. “I love business,” she said. She intends to use her education in part “to teach my kids how to be employers and not employees.”

“Deliverance was everything,” Sonota said. Her legal aid champions “were compassionate and yet realistic and logical, you know, to direct me on a better path in life, and I just love them for that.” 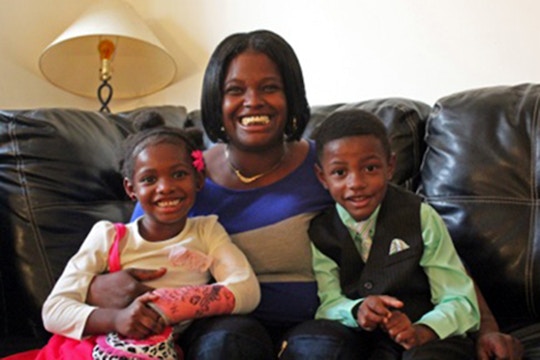 But if President Donald Trump’s “skinny budget” blueprint is adopted and passed by Congress, the federal funding that supports Legal Services of Eastern Missouri and a network of other legal aid groups across the country would disappear. That’s because the proposed budget eliminates the 43-year-old Legal Services Corporation, the federal entity that provides millions for state-based legal aid operations. Cutting its funding would deny millions of poor people access to the civil justice system, a circumstance that would disproportionately impact women, who make up 70 percent of clients served by LSC funds. Indeed, fully one-third of cases handled by LSC-affiliated groups involve women, like Sonota, who are victims of domestic violence.

In his budget note, Trump wrote that his “aim is to meet the simple, but crucial demand of our citizens — a government that puts the needs of its own people first. When we do that we will set free the dreams of every American, and we will begin a new chapter of American greatness.” Cutting a program that provides for the safety of domestic violence survivors — among many others — seems an odd way to achieve greatness.

The LSC was created in 1974 and has enjoyed bipartisan support for more than four decades. Its mission is to help provide meaningful access to the justice system for poor people who cannot afford an attorney in civil matters — including family law cases (concerning divorce and child custody matters as well as domestic violence), cases involving eviction or home foreclosure, cases where veterans are seeking access to benefits, and cases where the elderly have been preyed upon by financial scammers.

Currently, 93 percent of the LSC’s $385 million federal budget goes to funding some 134 nonprofit legal aid organizations operating more than 800 offices across the U.S. and its territories. Indeed, in many states, the money that comes from the LSC represents the bulk of the funding available to serve people in need of civil representation — in Alabama, the LSC provides 88 percent of legal aid funds; in South Dakota, it provides 80 percent; and in Vice President Mike Pence’s home state of Indiana, the group provides 67 percent of legal aid funds. In Arkansas, Florida, Georgia, Kansas, Texas, and Utah, LSC funds represent more than 50 percent of money allotted to legal aid services.

Still, that money covers services for only a fraction of people in need of civil legal help, a disparity known as the “justice gap.” Currently, 63 million individuals are eligible for legal aid; according to the LSC, 50 percent of people who seek out legal aid services are turned away because of a lack of available resources — in some states, the percentage turned away is far higher. In 2015, a total of 1.9 million individuals were served with LSC funding.

“The program has enjoyed broad bipartisan support for decades, that’s why it’s still here,” said Martha Bergmark, a lifelong public interest attorney and former president of the LSC. “It’s been … such a successful program and really the difference between a lot of people having any kind of access to legal help when they’re in pretty dire life-threatening and life-challenging situations.”

The ultra-right Heritage Foundation, from which Trump plucked many of his budget priorities, has long desired to ax the LSC from the federal budget, claiming that it isn’t the “duty of the federal government to provide defense in these types of cases.” The think tank argues that state and local governments already provide this funding and are “better equipped” to address the needs of those seeking civil representation — a position that is not supported by the facts on the ground.

It is true that states provide some funding for legal aid, but those funds have never been enough — in 2011, all state appropriations to the LSC-funded legal aid system amounted to roughly $123 million. The system is also infused with funding from the Interest on Lawyers Trust Accounts program, but that funding has decreased precipitously since the recession. Under IOLTA, certain funds that lawyers must hold for their clients go into interest-bearing IOLTA accounts; the interest earned is then transferred into the legal aid system. As interest rates plummeted, so too did the funds earned by the IOLTA system: In 2008, legal aid programs earned roughly $112 million in IOLTA funds; by 2011, the funding had dropped to roughly $61 million.

And while there is no guaranteed right to counsel in civil cases as there is in criminal matters, the notion that the federal government shouldn’t be supporting poor people in the civil justice system runs afoul of the constitutional promise of “liberty and justice for all,” notes the Conference of Chief Justices and the Conference of State Court Administrators, both of which strongly support funding for the LSC.

“Frontline judges are telling us that the adversarial foundation of our justice system is all too often losing its effectiveness when citizens are deprived of legal counsel,” the conference presidents wrote in late February to Mick Mulvaney, Trump’s budget office director. “Given these facts on the ground, we hope you will support our struggle to increase the availability of legal assistance to the most-needy members of our communities lest we further compromise our nation’s promise of ‘equal justice under law.’”

Bergmark finds it hard to understand how Trump’s campaign promise to champion people left behind fits within a budget proposal that would cut a program that does just that. Not only would the cuts disproportionately impact poor women, she said, they would hit those in rural areas of the country particularly hard, areas that supported Trump in the election. “There could be various arguments about why the federal government shouldn’t support various kinds of services, but this is one that serves the fundamental commitment to fairness and ‘justice for all’ that we make as a nation. So how could that be more appropriately done than by an investment of the federal government?”

When Sonota thinks about funding for legal aid being discontinued, she gets choked up. She believes defunding the LSC would sound a death knell for people like her. “To be realistic, being a black, single mother with the odds against me, living in poor communities, we need people to protect people like me, the underdog,” she said. “Cutting legal services … it’s like a cardiac arrest: a death for the community.”

Top photo: Lawyers with Memphis Area Legal Services give elderly and low-income residents free legal advice including advice on wills, powers of attorney, and other legal documents at the Orange Mound Community Center in Memphis in 2012.