Return From The Jungle 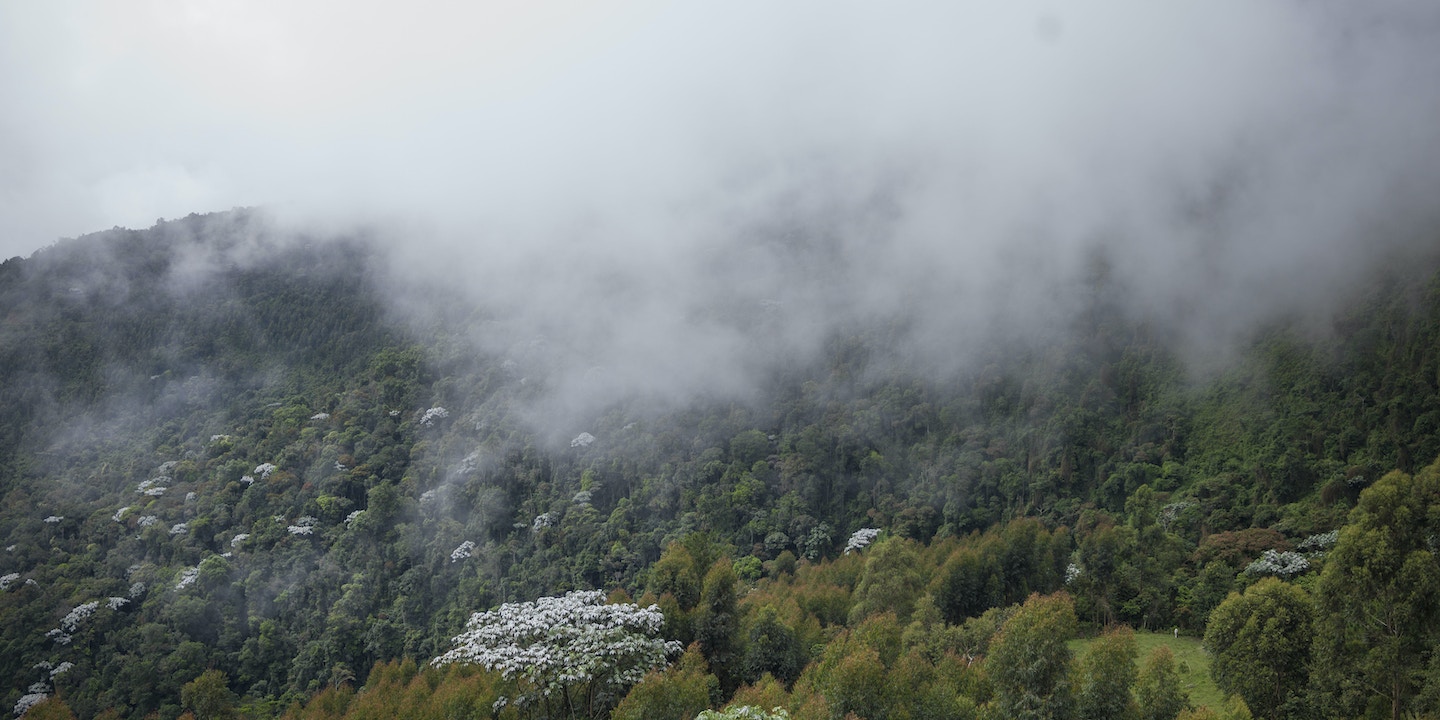 When Newsha Tavakolian arrived in the Colombian jungle to document the female guerrillas of the Revolutionary Armed Forces of Colombia, she knew she would witness history. War had recently ended and the women’s lives would change. After 50 years of clandestine warfare, peace meant the Colombian government would build houses for former guerrillas who lived on the run in the wilderness, and send teachers to meet with them weekly, to “teach them how to be a normal citizen,” Tavakolian says. “The most basic things, like you cannot enter people’s homes without permission.” When the guerrillas were allowed to begin keeping pets, Tavakolian photographed sleeping kittens curled into the nooks of the women’s rifles. A guerilla’s kitten sleeps beside her gun. Prior to the peace agreement, it was forbidden for fighters to keep pets.

In February, when the Trump administration announced plans to cut diplomatic aid by at least 37 percent, one question it provoked is what will happen with Colombia. Since 2000, the U.S. has spent $10 billion funding Plan Colombia, a program aimed at stopping the northward flow of drugs by focusing almost entirely on the country’s police and military, spending the billions to train and equip their forces. Plan Colombia buttressed the government’s war against the FARC, despite constant outcry from human rights groups about abuses committed by the U.S.-supported government forces.

There are about 7,000 FARC guerrillas, and soon they will leave the jungle and become civilians again. The enormity of the task ahead — especially for the estimated 30 percent of the guerrillas who are women — brought Tavakolian to Colombia.

Tavakolian, who arrived in South America after photographing Kurdish female fighters in Syria, is motivated by the question of what leads women to join rebel movements. Among Kurdish and Colombian female fighters, Tavakolian found that “when as a human being you’re in a condition where you have to survive or to protect the ones you love, you do whatever it takes.” In Colombia, she photographed FARC women between the ages of 20 and 45. A Colombian guerrilla braids her comrade’s hair in January.

“I never saw any rain in my life as heavy as in that jungle,” Tavakolian says. “And this is the first time [these women] have roofs above their heads. When they hear a helicopter, they still get anxiety. They have lived in the jungle in the rain, running constantly.”

The women of the FARC told Tavakolian they welcome peace, but “they had one thing in common: They are scared of the future because they think they’ll be killed by the paramilitary” when they hand over their guns to the government. Right-wing paramilitary forces are behind countless tortures and murders of social activists in the country. They sometimes worked as proxies of the government during the war; thus, one of the FARC’s demands in the peace negotiations was “that paramilitarism ends as a state policy.” A recent spate of killings of social activists and FARC members stokes those fears. Marina Ortis, above, joined the FARC 18 years ago: I’m from Meta which is a very dangerous area. I would always be scared of paramilitary and also the FARC. One night I ran away from home to just go and dance with my friends. When we arrived, the club was full of people with guns in their hands. They were talking to civilians, and a woman with a gun was telling another woman about how she feels safe as a woman in the FARC. I was 13 years old that night. The next day I wanted to feel safe like that woman from last night. The next day one of my sisters was hitting my youngest brother very violently and I hit back at my sister to defend my brother and because of all the yelling and screaming from our house, the FARC broke in to stop us from killing each other. The same day I left with them. We were six kids in one house with no father, and our mother was never home. When I went to their base in the jungle, the first thing I saw were two boys who had been missing from our village for many years. That gave me a warm feeling and I felt safe. When I was fighting and shooting I always had double feelings: happiness for being alive and sadness for the person I was killing, because all of us here are just soldiers fighting each other, because all of us are poor and have no future. And that’s the reason we are fighting with each other. After 18 years, when I saw my mother and siblings, I just looked at them, I didn’t cry, a fighter never cries. 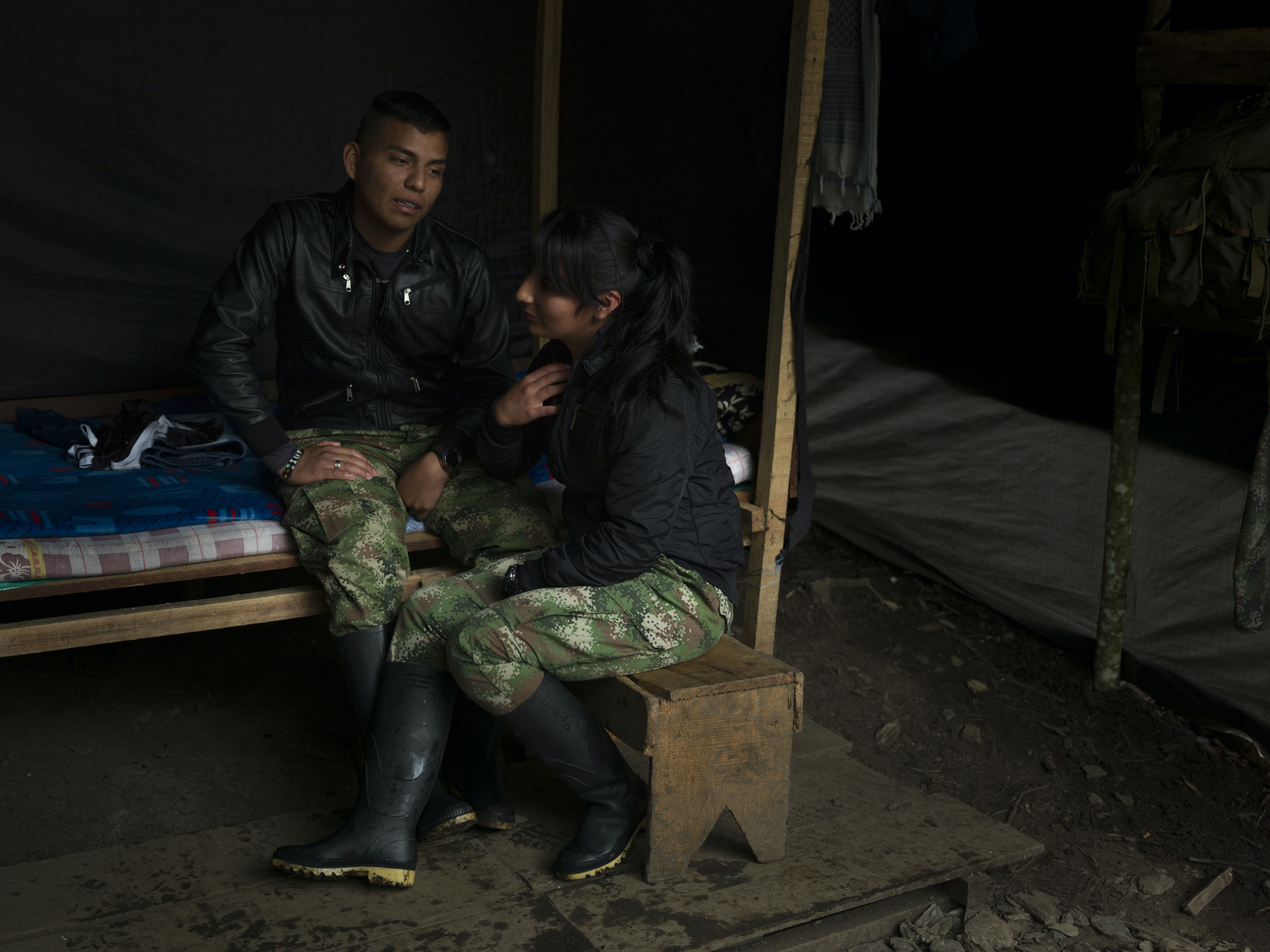 Heidi, above left, joined the FARC five years ago: When I start my new life, I will have to start from scratch. Now I want to change the color of my hair and my nails every day, because when you are a female fighter and living in the jungle, you don’t have time for these kinds of things, but we were washing ourselves everyday to make sure we were clean. When you are a woman with a gun, nothing inside you changes as a woman, you still wanna look good. But sometimes the situation does not allow you to do it. I have fear for my future because so many things are uncertain for me. 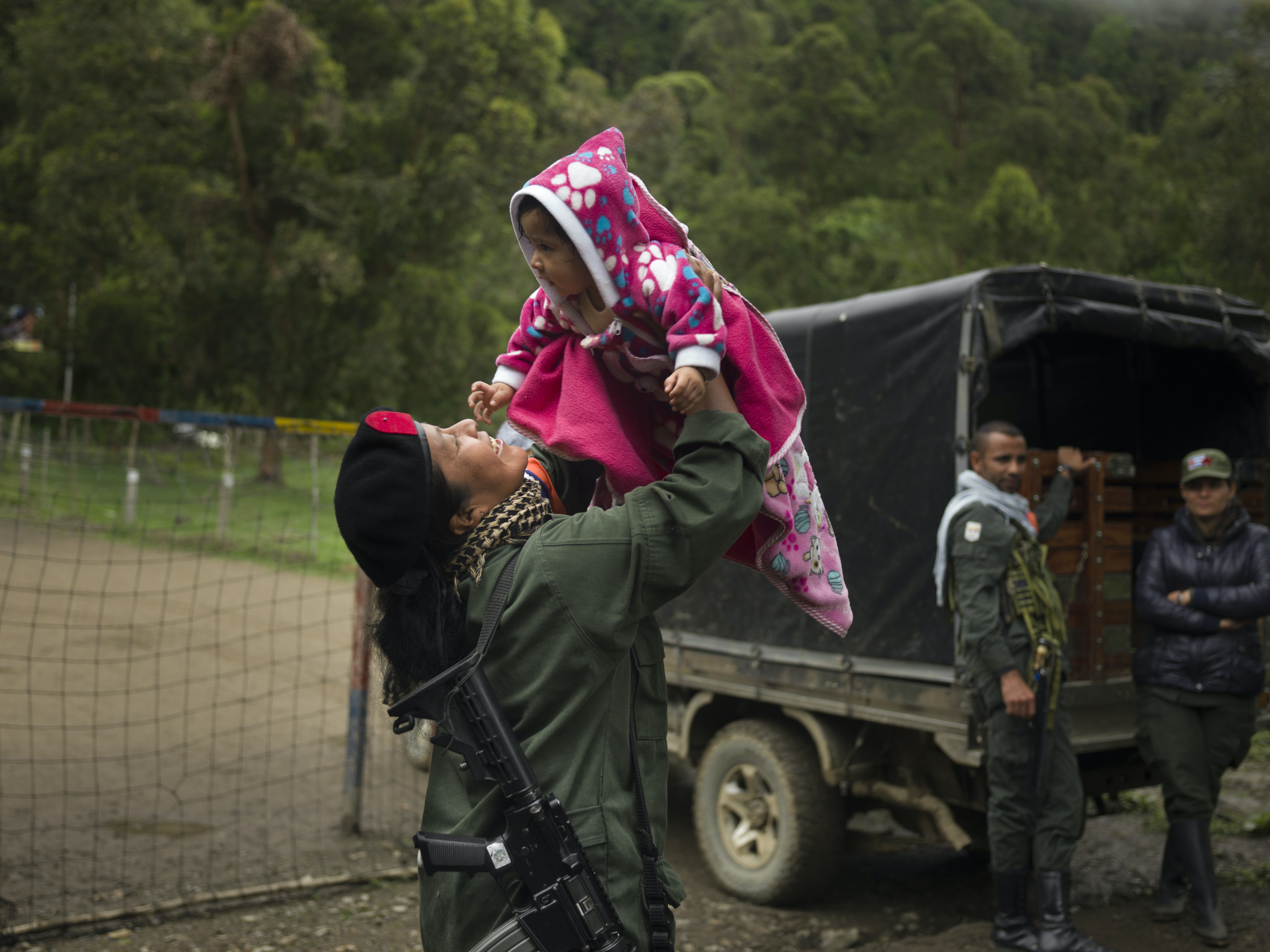 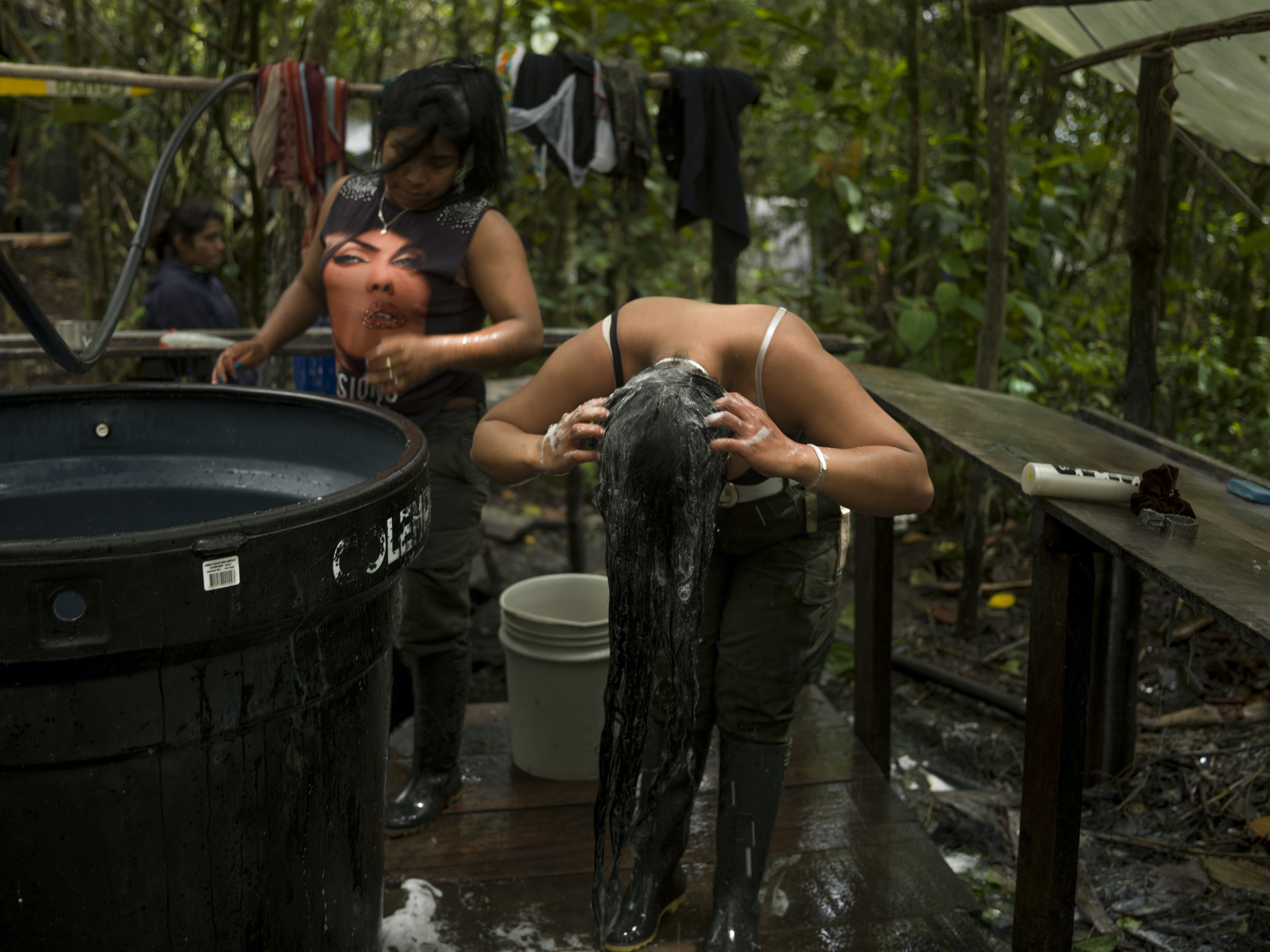 Angelica Valentino, posing with a gun, joined the FARC when she was 12: When my mother remarried, I didn’t get along well with her husband and I decided to run away and join the FARC. I’m a surgeon, I have no education but by doing a lot of surgery I became a self-taught surgeon. I learned not to be afraid because fear can put you and others in danger. For example, the first time that I had to cut the leg of one of the guerrillas because he was badly wounded, if I had felt fear and doubted for one second, I might have killed him because of the delay. Fear in these kinds of situations means nothing. Now it has been 12 years that I’m a surgeon here. Here I became a woman and I’ve learned how to not count on anybody but only myself. When I was 7, my mother sent me to my aunt because she could not pay for my food. My aunt’s husband raped me for many years. From 7 years old until 12 years old, I was raped constantly. Here, I found my family. 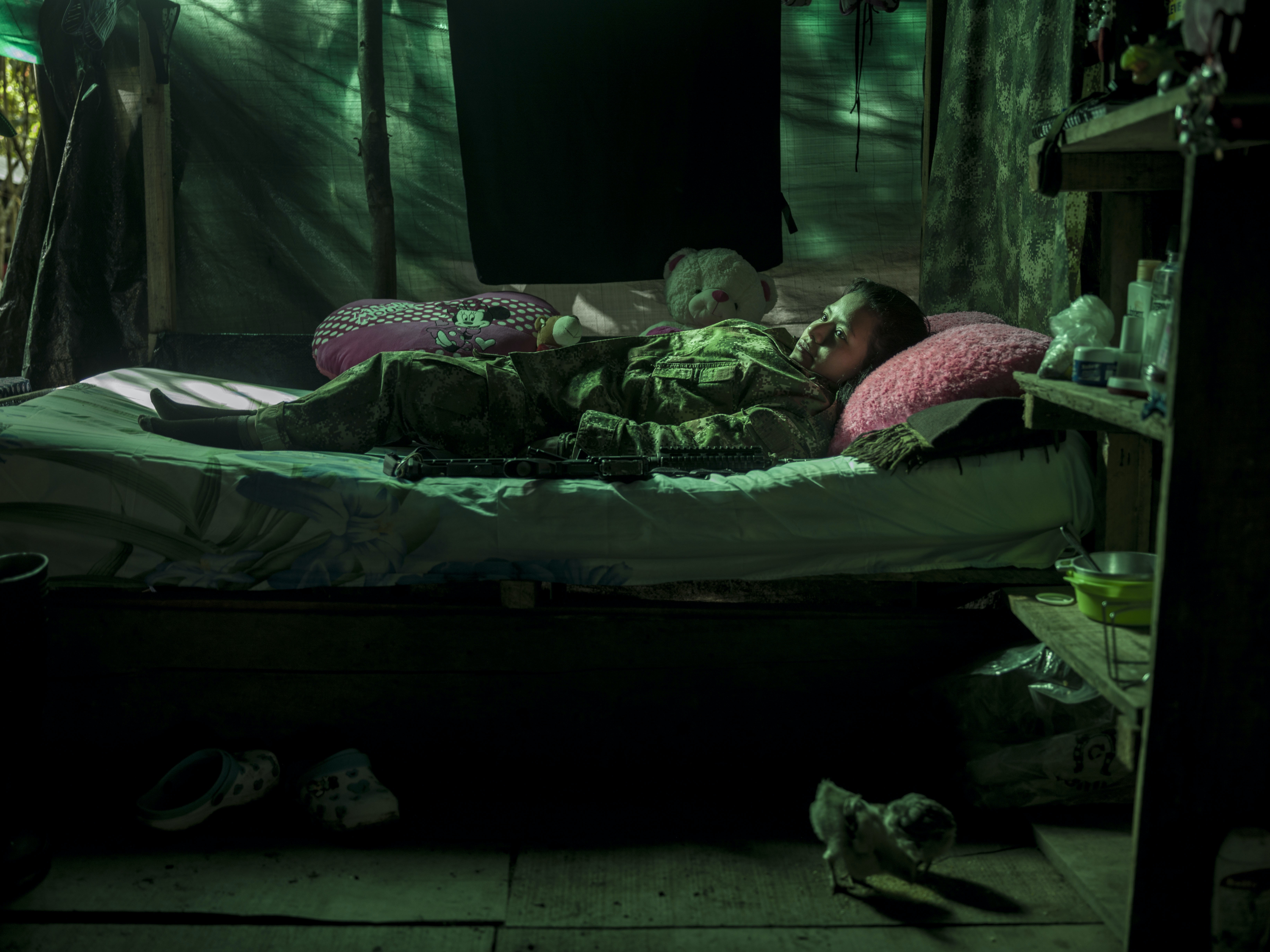 Andrea Cepeda, above, joined the FARC when she was 16: My father was also a FARC guerrilla. When I was 11, he was killed. After that, my mother took all her children to Cali and we started working on the land as farmers. While we were working, the FARC guerrillas were there most of the time and I was wondering all the time if I should join them along with my sister. So one day, I made my decision and left the house. Since I was a small girl, when we would go to battle, my commander did not want me to be in the front line, and my task was to take care of the other commanders in the back. All my belongings from these past eight years can be packed into just one small backpack because we had to run away all the time and we didn’t have time to pack and we always had to be ready. I lost my best friend in an attack. I wish she was here with me. I’m scared of my future, because of the paramilitaries who want to kill us.