U.N. Ambassador Nikki Haley Doubled Down on Threats to Punish Criticism of Israel

Haley told the AIPAC that “everyone at the United Nations is scared” to discuss a U.N. resolution condemning Israeli settlements. 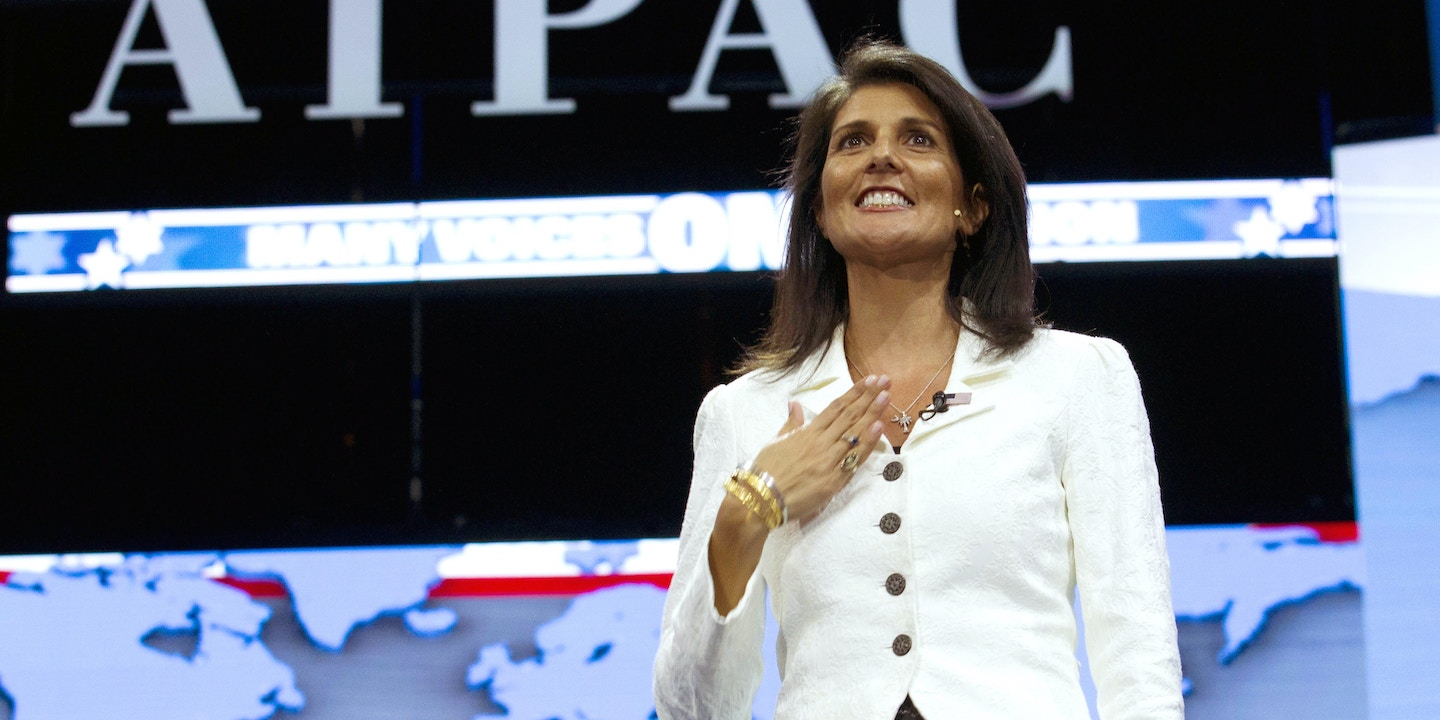 U.N. Ambassador Nikki Haley repeated her prior threats to punish criticism of Israel on Monday, boasting about creating a climate of fear at the U.N. in which other diplomats are frightened to speak to her about recent efforts to condemn Israel’s illegal colonization of the West Bank.

Haley was addressing the annual conference of the American Israel Public Affairs Committee – the powerful Washington, D.C. lobby whose self-described goal is to “strengthen, protect and promote the U.S.-Israel relationship.” Each year, thousands of delegates and students descend on D.C. for the forum, where the most senior politicians of both parties — from presidential candidates to Congressional leadership – often speak.

Haley received thunderous applause and a standing ovation from the crowd, a reception rivaled only by what they gave Israel’s prime minister, Benjamin Netanyahu, when he spoke to the conference by satellite.

AIPAC was outraged last December when the Obama administration declined to veto a U.N. Security Council resolution condemning settlement expansion in the occupied West Bank. AIPAC released a statement saying it violated “longstanding policy,” despite the fact that many previous Presidents, including Ronald Reagan and George Bush, allowed many similar resolutions to pass.

“What I can tell you is everyone at the United Nations is scared to talk to me about Resolution 2334,” Haley told AIPAC, “and I wanted them to know that, look, that happened, but it will never happen again.”

Since her confirmation Haley has moved quickly to silence any criticism of Israel at the U.N. In her first speech at U.N. headquarters in New York, Haley promised to “have the backs of our allies,” and added that “for those who don’t have our back, we’re taking names; we will make points to respond to that accordingly.”

Then last month Haley shocked diplomats when she blocked the appointment of former Palestinian Prime Minister Salam Fayyad to a senior U.N. post unrelated to Israel-Palestinian issues. Fayyad was highly unpopular with Palestinians and sometimes called a “collaborator” with Israel, while being praised by the Bush administration for fighting corruption.

Haley told the audience at AIPAC that she saw the appointment of Fayyad as a “freebie” for the Palestinian Authority, and that her move was aimed at punishing them and the U.N. system.

Earlier this month, Haley also torpedoed a U.N.-commissioned report in which independent scholars found “beyond a reasonable doubt” that Israel’s treatment of the Palestinians rises to the level “of the crime of Apartheid.” At Haley’s request, the U.N. secretary general withdrew the report, and the head of the U.N. agency that published the report resigned.
“I wear heels. It’s not for a fashion statement,” Haley told the crowd. “It’s because if I see something wrong, we’re going to kick them every single time.”

Haley’s efforts at the U.N. should not come as a surprise. Despite her lack of foreign policy experience, Haley sailed through the confirmation process in part due to her commitment to reforming the U.N.’s “bias against our close ally, Israel.”

Throughout the hearings, Haley claimed her willingness to silence criticism of Israel as a chief qualification. She reminded the Senate Foreign Relations Committee that as governor of South Carolina, she was the first governor to sign a law punishing businesses who participate in boycotts of Israel – a law that inspired dozens of similar bills in other states. She was eventually confirmed by the full Senate by a vote of 96-4.

Speaking on Monday, Haley said she would bring that same approach to the U.N.

“With the BDS [boycott, divestment, and sanctions] movement that we were able to stop in South Carolina, we’re going to continue to take that to the U.N. and make sure that they understand that is not what we need to be focused on,” Haley said.

Top photo: Ambassador to the United Nations Nikki Haley waves to the crowd before she speaks at the 2017 American Israel Public Affairs Committee (AIPAC) Policy Conference held at the Verizon Center in Washington, Monday, March 27, 2017.