Attorney General Jeff Sessions called for the review of “existing or contemplated” agreements between police departments and the federal government. A sweeping new Department of Justice directive calling for the review of dozens of agreements between police departments and the federal government is raising alarms among police reform advocates around the country, with critics arguing that the Trump White House is dead-set on undoing hard-won criminal justice achievements.

The attorney general’s two-page memo also took aim at “existing or contemplated consent decrees” between the federal government and local law enforcement agencies, setting the stage for an examination of numerous agreements and ongoing deliberations set in place by the Trump administration’s predecessors.

Though it had been anticipated for months, Sessions’s call for a review of the Justice Department’s consent decrees was met with immediate criticism from civil liberties advocates, who view the binding legal agreements, overseen by independent monitors, as a vital tool for reforming abusive police practices and departments.

“The memo is disappointing to say the least,” Jeffery Robinson, deputy legal director of the ACLU, told The Intercept.

Dated March 31, Sessions’s memo was made public just hours before the DOJ asked a federal judge for a 90-day delay in consent decree proceedings focused on the Baltimore Police Department — a process that began following protests surrounding the death of Freddie Gray, a 25-year-old African-American man who died in police custody. Baltimore’s police chief and mayor both pushed back on the DOJ request Monday, the Associated Press reported, arguing that a delay in the process would damage public trust.

“We want to move forward,” Mayor Catherine Pugh told the AP. “We want to work with our police department. We believe there are reforms needed.” A member of the Baltimore Police Department stands guard outside of the department’s Western District police station as men hold their hands up in protest during a march for Freddie Gray in Baltimore on April 22, 2015.

If granted, the delay could pause an agreement between the BPD and federal attorneys announced in January, before the Trump administration came to office. The DOJ’s move in Baltimore, coupled with the release of the Sessions memo, has left many supporters of criminal justice reform worried that a new era is on the horizon, one in which the federal government takes a hands-off approach to reining in institutionalized police abuses on the local level.

Under the Obama administration, the DOJ’s Civil Rights Division opened 25 investigations into law enforcement agencies across the country, resulting in 14 consent decrees — a dramatic increase from the Bush years. With both Trump’s and Sessions’s records of resisting critical examinations of American policing — and with the release of the attorney general’s memo — advocates and legal experts are increasingly concerned that the new administration is hoping to unravel past agreements and make new police accountability investigations more difficult to launch.

In the case of consent decrees that are already being enforced, Sessions would need buy-in from the judges who approved the agreements to enact changes — a difficult, though not insurmountable, task for government lawyers. In the case of cities where decrees have not yet been finalized, such as Baltimore, or cities where agreements to enter into decrees are still under discussion, such as Chicago, the Justice Department could have considerably more sway in impacting the outcome of the processes. In the case of future investigations, Sessions has already vowed to “pull back” on such inquiries.

During her six years as deputy chief in the Special Litigation Section of the Civil Rights Division, Christy E. Lopez led several of the Obama administration’s investigations into police departments and law enforcement agencies, including in Ferguson, Missouri, where she drafted a blistering and widely cited report on police and municipal court abuses and exploitation in St. Louis county.

Now a law professor at Georgetown University, Lopez told The Intercept that Sessions’s long history of challenging the propriety of consent decrees makes his memo particularly concerning. “Given Sessions’s skepticism of consent decrees, and frankly this entire administration’s skepticism of using the federal government to protect people’s rights and do good in the world,” she argued, it’s fair to view the memo as a signal of the administration’s intent to “second guess every single consent decree out there.” Where that will lead, Lopez said, remains to be seen.

“It doesn’t bode well for Chicago, obviously. It doesn’t bode well for Baltimore,” she explained. “What it means for the other decrees is really going to depend a lot on what judges do, whether they modify those decrees, and it’s going to depend on whether community groups intervene to try to enforce the decrees themselves, but it certainly signals that in the future, if a police department hasn’t done what it said it was going to do under consent decree and the monitor wants to call them on that, the DOJ is probably not going to have the monitor’s back.” 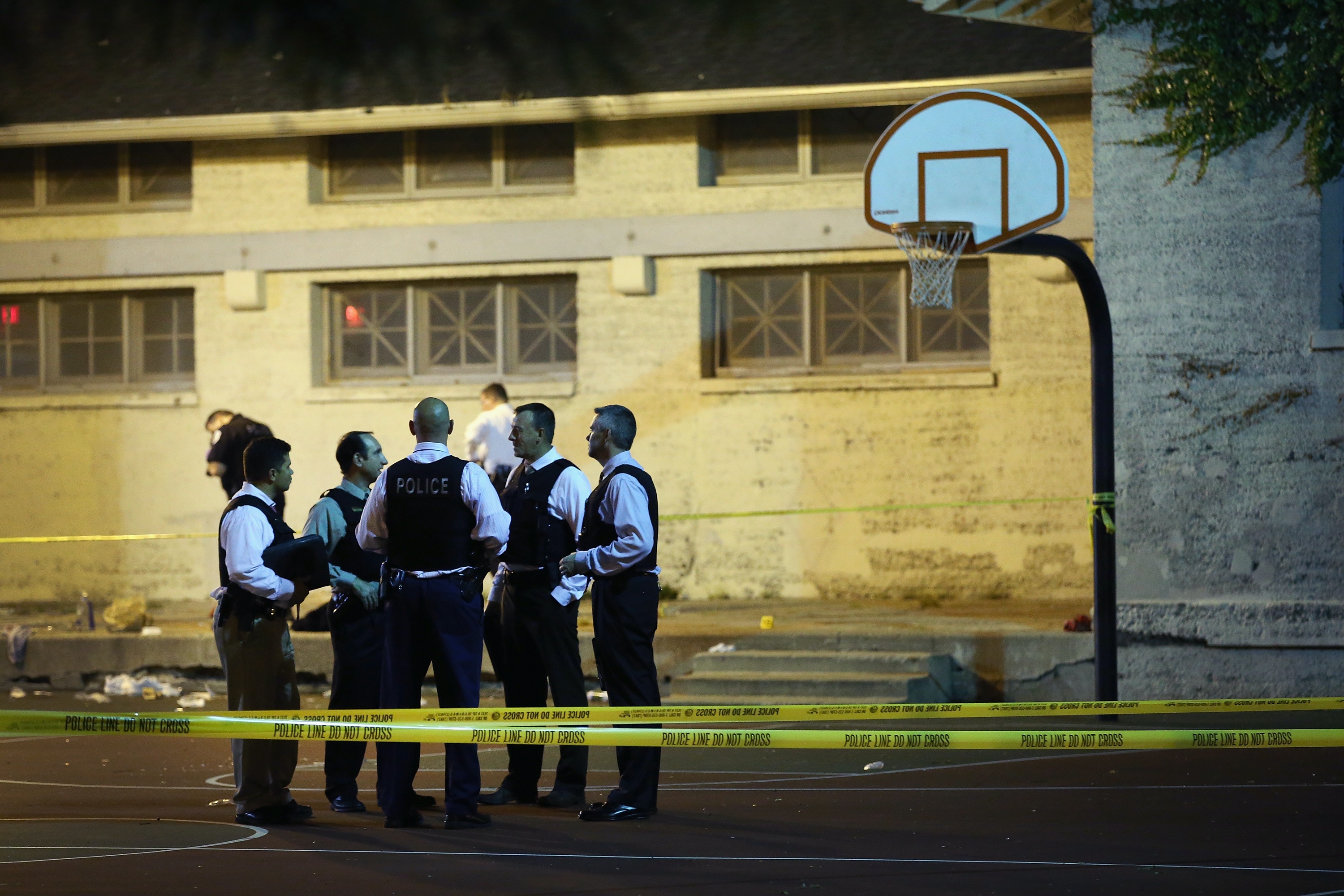 Police investigate the scene in Cornell Square Park on the Southside of Chicago, where 11 people were shot in September 2013.

Spanning departments large and small, several of the agreements hammered out in Obama’s second term took shape against a backdrop of historic protests that pushed the country’s deep divide over race and justice into the national spotlight. For many police reform advocates, the aggressive efforts at law enforcement accountability marked an overdue step in the right direction. For critics on the right, however, they were portrayed as an example of a broader anti-police sentiment sweeping the nation.

Trump echoed the latter position throughout his campaign and underscored the sentiment during his January 20 inauguration speech, when he vowed to end the country’s “dangerous anti-police atmosphere.” The president found an eager partner in Sessions, his choice for the nation’s most powerful law enforcement position. For years, the longtime Alabama lawmaker resisted the kind of institutional focus that became the hallmark of Obama’s Civil Rights Division investigations, instead taking the view that police abuses stem from “bad apples” rather than rotten departments and that federal investigations are bad for police morale.

In the case of consent decrees in particular, Sessions said in a 2008 paper that such agreements reflect a “dangerous exercise of raw power” and an “end run around the democratic process.” Despite admitting that he never actually read the DOJ’s nearly 14-month investigation into the Chicago Police Department, Sessions continued to question the viability of federal investigations into police departments following his confirmation hearing in February, again touting the importance of police morale when asked about matters of law enforcement accountability.

“We’ve got to understand that police are the front-line soldiers in the effort to keep the crime under control, along with sheriffs’ deputies,” Sessions told reporters at the time. “Many departments are not doing well in terms of morale, in terms of following good policies.”

When the president signed an executive order in January calling on local law enforcement nationwide to deputize officers as de facto immigration enforcement officials, he was met with concerted pushback from police chiefs across the country, who have long argued that the federal government has no business telling local police how to do their job. Sessions, whose former aides drafted memos for the implementation of those orders, ironically deployed a similar line of reasoning in his memo calling for a review of DOJ consent decrees.

“Local control and local accountability are necessary for effective local policing,” the attorney general wrote. “It is not the responsibility of the federal government to manage non-federal law enforcement agencies.”

“What Mr. Sessions is describing, there are many of us who have heard and seen it before — he is definitely talking about going back to what used to be, and for somebody that grew up in Memphis, Tennessee, in the ’50s and ’60s, I’m not interested in going back,” he added.

“Don’t even think about the existing consent decrees or the ones that are almost in existence, like in Baltimore and Chicago, don’t think about them at all,” he said. “Think about what’s going to happen going forward. If Jeff Sessions was in charge, there never would have been a Ferguson investigation. There never would have been an investigation into the Baltimore Police Department, and I don’t know if you’ve read the DOJ report, but it seems to me that any conservative, liberal, Republican, Democrat — anybody reading that report — would be extremely concerned about the patterns and practices of the Baltimore Police Department.”

Top photo: A woman faces a line of Baltimore police officers in riot gear during protests following the funeral of Freddie Gray on April 27, 2015, in Baltimore.