Politicians in California are shying away from the principled stance that everyone facing deportation deserves legal representation. On the afternoon of March 30, the Los Angeles City Council’s Ad Hoc Committee on Immigrant Affairs took their seats in an ornate hearing room on the ground floor of the Art Deco tower of L.A.’s City Hall.

The audience, seated on long wooden benches, watched quietly as the city council members on the committee went through a list of proposals on how the city’s new $10 million legal defense fund for undocumented immigrants should be implemented. Except for a solitary, very vocal Trump supporter, most everyone in the audience was an immigrant rights advocate. Some of them held up pieces of white printer paper with “Sanctuary Now” and “Due Process 4 All” printed across them.

The “L.A. Justice Fund,” which provides lawyers to indigent deportation defendants, who are not guaranteed counsel under current law, was announced by Mayor Eric Garcetti in late December. In the months since, the Trump administration has overseen a deportation dragnet in Southern California, and religious leaders in Los Angeles have begun building safe houses to hide immigrant families. But the March 30 meeting was only the second time the committee has met, and the fund’s first disbursement has yet to be made.

After a bit of unremarkable discussion, the city council members arrived at the proposal’s most controversial point: whether immigrants with violent criminal histories should be allowed to access the fund. In a city whose elected leaders are nearly unanimous in their opposition to President Trump’s draconian immigration enforcement policies, the question of the moral status of undocumented immigrants with violent criminal pasts marks the point of fracture in the political consensus.

Since Trump’s election, immigrant rights activists in Los Angeles and throughout California have insisted that legal representation for deportation defendants be universal, without exception, as a matter of basic principle. “Everybody who goes through this process deserves an attorney,” explained Caitlin Bellis, an immigration lawyer with Public Counsel who has been working on the development of the L.A. Justice Fund since 2015. Immigration law is one of the most complex bodies of law in existence, yet immigrants with no legal training, who do not speak English, who are in detention with no access to the internet, are routinely required to argue their own cases before a judge without a lawyer. “I don’t think that most people understand how absurd these proceedings are,” Bellis told me.

Having a lawyer, of course, does not mean that a defendant will avoid deportation. “L.A. City Council is not making a determination as to whether they can remain in the country; that determination is still up to the judge,” Talia Inlender, another lawyer at Public Counsel, told me. But access to counsel sets a floor for fairness in the process. “People with severe convictions are probably not going to be released,” said Bellis. “There’s a big difference between deciding who gets to stay and who gets to go, and providing someone with an attorney to make this absurd system slightly fairer.”

But political leaders in Los Angeles and in the California state legislature are shying away from the principled stance that immigrant rights advocates like Bellis and Inlender have urged them to take. On March 29, members of the California Senate amended Senate Bill 6, the act that proposes to establish the statewide counterpart to the L.A. Justice Fund. The prior draft of the bill explicitly asserted the right of undocumented immigrants with violent felony convictions to access the fund. The amended bill reversed that language, prohibiting their participation.

With that change, the legal representation offered by S.B. 6 was no longer universal, and the narrative shifted from one of upholding equality before the law to one of bargaining over who deserves due process and who does not. 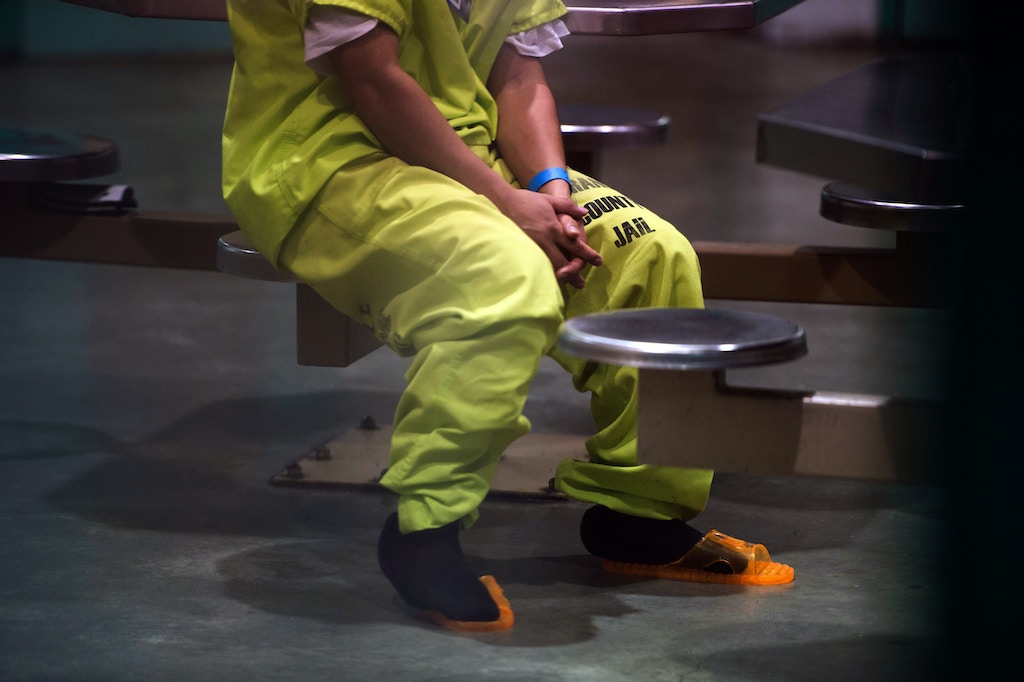 With the lowering of the state’s standard, Los Angeles city officials were off the hook for what might otherwise have been a politically challenging decision. At the immigration hearing at City Hall, seated at a long desk facing the Councilmembers, a staffer for the city administrative officer recommended that the L.A. Justice Fund adopt S.B. 6’s new language, “to ensure consistency with the proposed state program.” A considerable moral concession had become a mundane bureaucratic accommodation to somebody else’s decision.

The L.A. version, in fact, went even further than the statewide bill, adding convictions for human trafficking, domestic abuse, and pimping to the list of charges that would bar access to the fund.

When it came time for public comment, speakers from the audience lined up to voice their support for the L.A. Justice Fund. One after another, they argued that it should be available to anyone facing deportation, without restrictions. “No one is beyond redemption,” Lindsay Toczylowski, executive director of the Immigrant Defenders Law Center, told the committee.

Trump has taken this binary view of immigrants to an extreme, but he didn’t invent it. Under the previous administration, the policy of distinguishing between “good” and “bad” immigrants was known informally as “felons, not families,” after a 2014 speech President Obama delivered to outline his immigration enforcement priorities. Under Obama’s policy, the government’s use of the criminal label to adjudicate deportation cases often verged on parody, applying in equal measure to serious violent felons and to undocumented immigrants with decades-old drug convictions that had long been resolved, or people whose most serious “crime” was driving over the speed limit.

The experience of the Obama years is a big part of what has motivated immigrant rights advocates in California to press for universal due process, to leave what they regard as a destructive false dichotomy behind. When the right to an attorney is predicated upon whether a defendant is regarded as socially worthy, they argue, the principle of equal representation under the law is compromised. “Policymakers who fall into that framework are falling into Trump’s framework,” Bellis said, “rather than challenge that narrative, and do the hard work of talking about how people are complex — that everyone, even people who have committed crimes, still have basic rights.”

The carve-out proposed for the L.A. Justice Fund, they maintain, represents a continuation of the “felons, not families” philosophy — the separation of “bad hombres” from “law-abiding” immigrants. And the denial of due process that it represents is not restricted to those who are actually guilty of the crimes they were charged with.

Under existing immigration law, a number of criminal charges are classified as “deportable offenses.” If undocumented immigrants are convicted under such a charge, if and when they find themselves in immigration court (which often follows directly from imprisonment), a judge is obligated to deport them. When facing a charge for a deportable offense, then, it is often in an undocumented defendant’s best interest to plea to a more serious crime that does not automatically trigger deportation — even if it means a longer jail sentence. “Sometimes a felony burglary will have less of an effect on deportation than a lower misdemeanor crime,” Toczylowski explained.

Especially under the broad new enforcement mandate adopted by the Department of Homeland Security under Trump, it is these defendants in particular who are most in need of a lawyer. But because the amended language proposed for S.B. 6 and the L.A. Justice Fund excludes people convicted of violent crimes, these defendants could be barred from receiving representation under the funds because of the charges they pled to under duress. In other words, an undocumented immigrant who carried out a minor crime might find herself barred from accessing an affordable attorney because the labyrinthine rules of federal immigration law compelled her to accept a more serious charge in order to avoid deportation. It’s a Catch 22. “Immigration law is so unforgiving,” Toczylowsi said. “So many people are going to fall into these traps.”

Late in the afternoon on the day of the hearing, the immigration committee members at L.A. City Hall voted on the new language for the L.A. Justice Fund. They adopted the policy, making Los Angeles, in contrast to New York and San Francisco, the first city to include a carve-out in its legal defense fund for undocumented immigrants.

A few days later, on April 3, debate opened up in the California Senate on S.B. 6. The bill had been introduced months before, to much fanfare, as the “Due Process For All Act.” Now, with the carve-out, it had been re-titled the “Expanding Due Process Act.”

Senator Ben Hueso, the author of the law, took the floor of the Senate to advocate for his bill. Some of his colleagues questioned him on why he had not gone further in restricting access to the fund. One, a Democrat, wanted him to add “serious felonies” to the list of “violent felonies” that comprised the carve-out — a separate category under the state’s penal code. Another, a Republican, was outraged that human trafficking did not make the cut. Hueso told his colleagues he would work with them on the question of serious felonies, and reassured them that human trafficking would be included in the list. It was like watching a real life slippery slope in action. (His office said he will “make the determination of whether to include that list into S.B. 6 in the near future.”) The bill passed, just barely, by the two-thirds majority it required.

Last December, the announcements of S.B. 6 and the L.A. Justice Fund contributed significantly to an emerging mythology around California’s elected leaders, which portrayed them as the tip of the spear of “the resistance” to Trump’s agenda. But from up close, Bellis sees the picture differently. “Most people are talking about how California is taking these bold stances, and wondering if we’re going too far, but actually it seems quite cautious,” she told me. “We want to help immigrants — but only the ‘good immigrants!’” As much as she and her colleagues have sought to frame the issue as a matter of basic fairness, their efforts have been stymied by “this toxic dialogue that’s taking place.”

“It’s unfortunate that the conversation has shifted to ‘don’t provide any money to people who have criminal convictions. No funding for criminals,’” she said.

“This is really a matter of due process,” Toczylowski asserted. “There should be no carve-outs for due process in the United States.”

Top photo: Immigrants take a workshop to make a preparedness plan, in case they are confronted by immigration officials, at Academia Avance charter school where a father was recently arrested by ICE agents when he dropped off his daughter for school, on March 9, 2017 in Los Angeles.