A gang of corrupt Chicago police officers fabricated evidence and then conspired to support arrests by falsifying reports and lying under oath. 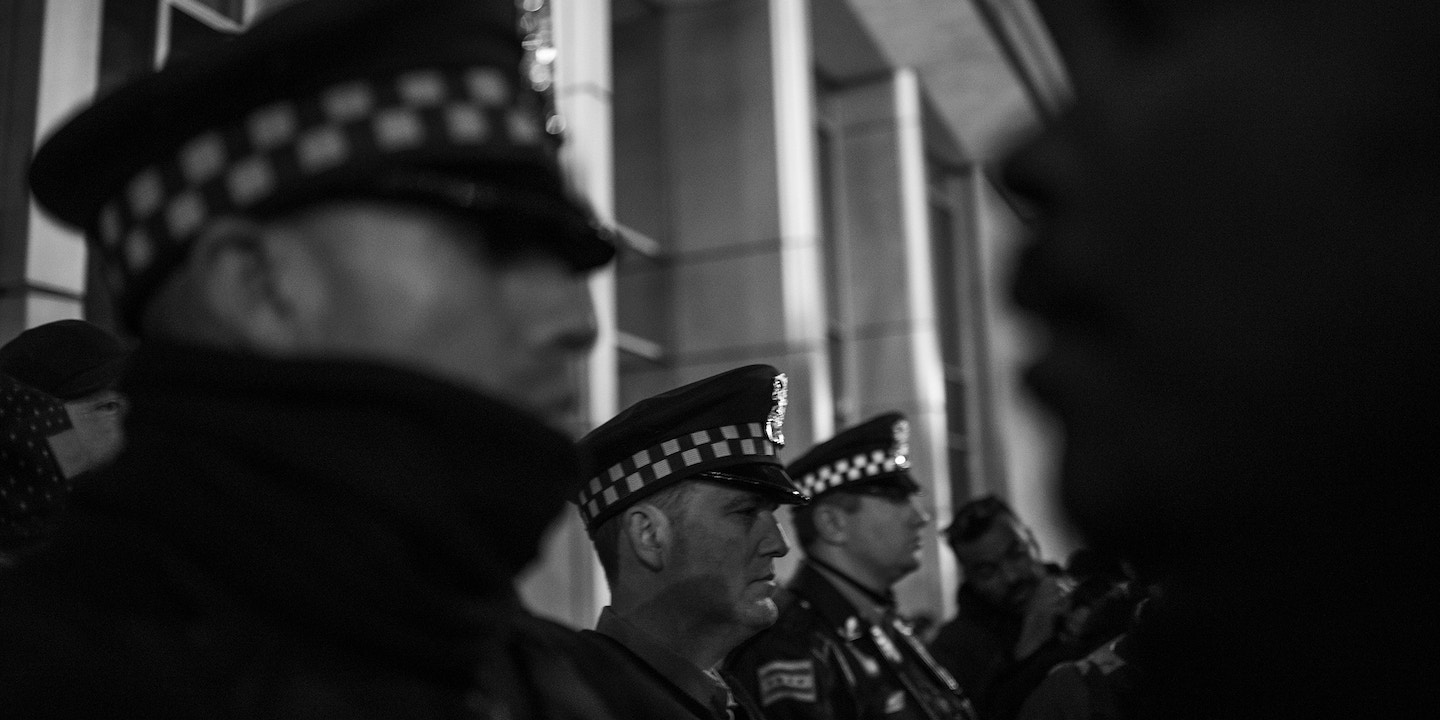 Anthony McDaniels was walking to his car, a Ford Taurus parked in front of his home, on November 21, 2008, when he encountered Chicago police officers Kallatt Mohammed and Douglas Nichols. He knew them, McDaniels stated in an affidavit, because over the years they and other members of a gang tactical team under Sgt. Ronald Watts had repeatedly shaken him down for money.

The officers took his car keys, and Mohammed asked him, “What you got, man?” McDaniels understood him to be asking whether he had drugs or money. He told them he didn’t have anything.

“I’m tired of you guys fucking with me,” he said.

Mohammed searched him and found $638, which he pocketed. Nichols searched the car and emerged with a gun. McDaniels denied it was his.

“We can make this go away,” Mohammed told him, “if you give us something.”

When McDaniels replied “I ain’t got nothing to give you,” the officers arrested him and charged him with illegal possession of a handgun.

The story told by the officers in police reports and sworn testimony is very different: Officers Nichols and Manuel Leano were engaged in narcotics surveillance when they saw McDaniels running from his house, holding his waistband and yelling “go, go, go.” He entered the passenger side of the Taurus and fled. The officers pursued him for several blocks. McDaniels jumped out of the moving car and ran, still holding his waistband. Pursuing him on foot, Leano saw the butt of a gun protruding from McDaniels’ waistband. McDaniels fell to the ground. The gun “eject[ed] from his waistband area” and landed on the sidewalk. Leano recovered the gun, while Nichols apprehended McDaniels. After his arrest, McDaniels volunteered at the station that he had bought the gun for protection and was trying to get it out of his car.

Having served nine years of a 12-year sentence, McDaniels is now challenging his conviction with the help of the Exoneration Project of the University of Chicago Law School. His future depends on the assessment of these competing narratives.

According to McDaniels, the first time he saw Leano was when the officer testified in court. This is consistent with the pattern in other cases in which members of Watts’ team who were not at the scene are listed as arresting officers or witnesses. McDaniels also denies that he made a voluntary admission about buying the gun. He maintains he was silent at the station. The gun at issue, a Glock, was inventoried as having a defaced serial number, but the gun introduced into evidence during the trial bore a legible serial number.

The police testified that McDaniels entered the passenger door of his car and then fled. They said there was a male driver and a female passenger in the car, but there was no testimony about any effort to locate and apprehend those individuals. Mohammed testified that he had driven McDaniels’ Ford Taurus from the site of the arrest, supposedly several blocks from McDaniels’ home, to the district station. This testimony is contradicted by that of a tow truck driver who provided documentation that he had picked up the Taurus in front of McDaniels home and deposited it at the police pound.

The trial and appellate courts found the officers’ richly detailed account credible and relied on their word in reaching the conclusion that McDaniels was guilty. Both resolved all ambiguities and inconsistencies in favor of the police narrative. It is impossible to do so now, however, in light of other exoneration cases in which members of Watts’s team are known to have fabricated evidence and falsified official reports.

Nichols, Leano, and Mohammed did not respond to requests for comment. The Chicago Police Department said it does not comment on pending litigation. A Criminal Conspiracy in the Chicago Police Department

In “Code of Silence,” a four-part investigation published in The Intercept last October, I reported on a massive criminal enterprise within the Chicago Police Department. That reporting was based in large part on the accounts of Shannon Spalding and Danny Echeverria, Chicago narcotics officers detailed to the FBI to investigate Sgt. Ronald Watts and his team, who they alleged were major players in the drug trade in South Side public housing. Spalding and Echeverria charged that senior police officials disclosed their identities within the department and ordered a campaign of retaliation against them in an effort to subvert the investigation.

There was hardly a time during Watts’ 18-year career when he and his team were not under investigation by one or more agencies; among them, the FBI, the CPD’s Bureau of Internal Affairs, the DEA, the ATF, and the Cook County States Attorney’s Office. Yet those investigations yielded little. In the end, Watts and his partner Kallatt Mohammed were caught in an FBI sting, taking $5,200 from a confidential informant they believed to be a drug courier. Convicted in 2013 on a single count of stealing government property, Watts served a sentence of 22 months and Mohammed a sentence of 18 months. No other members of the team were criminally charged or otherwise disciplined; several, including Nichols and Leano, remain on the force and one has been promoted to sergeant.

However limited the charge and light the sentences, the fact that Watts and Mohammed were convicted, in combination with the documentary record generated by Spalding and Echeverria’s whistleblower lawsuit, which was settled by the city of Chicago for $2 million, created a beachhead from which civil rights attorneys at the Exoneration Project have successfully challenged the convictions of several individuals who were convicted based on testimony by Watts and his crew.

To date, there have been four cases in which convictions have been overturned and certificates of innocence issued: Ben Baker (twice), Clarissa Glenn, and Lionel White. These cases have certain common elements. In each case Watts or members of his team arrested the individual because he or she refused to cooperate with their criminal purposes. They fabricated evidence, and then conspired to support the arrest by falsifying official reports and making false statements under oath.

According to Joshua Tepfer of the Exoneration Project, the case of Anthony McDaniels conforms to this pattern. On March 30, Tepfer filed a petition for post-conviction relief on behalf of McDaniels. A hearing is scheduled for April 12.

As one Watts-related exoneration case follows another, a seismic shift is occurring in the meta-narrative that presumes the police are telling the truth in the absence of definitive evidence to the contrary, while defendants known to participate in the drug trade are presumptively not credible.

Shannon Spalding recalls a high-ranking police official remarking to her once that federal prosecutors tend to see corruption such as that of the Watts cohort as “a victimless crime” — a matter of criminals preying on criminals. To the extent such an attitude holds sway, it both expresses and enables the conditions of structural racism that Watts and his co-conspirators, operating primarily in impoverished public housing developments, exploited for their criminal ends. It renders invisible the abandoned communities they were supposed to serve. It also disregards the fact that while some they falsely arrested were drug dealers, those individuals were innocent of the crimes for which they were convicted. Viewed in this light, the ultimate source of the impunity these officers enjoyed for so long was the social status of their victims. When whole populations and communities are presumed criminal, it confers upon abusive officers a fearsome power to toy with people’s lives.

It is thus striking, after years of fruitless investigations by major law enforcement agencies, that the process of exposing the damage done by the Watts team is now being pushed forward by their victims, who have become visible and audible by virtue of the legal strategies of the Exoneration Project.

In response to a petition I filed in November 2016, the Cook County States Attorney’s Office has agreed in principle to appoint a special master for the purpose of identifying valid claims of wrongful conviction based on false arrest by members of Watts’ crew, subject to securing adequate funding for the purpose. For the moment, its Conviction Integrity Unit is re-investigating cases of individuals currently incarcerated, such as Anthony McDaniels, whose convictions rest on the word of these officers.

As the wrongful conviction cases accumulate, the pattern of abuses by Watts’ team becomes ever clearer. That pattern in turn provides context for assessing credibility in future cases. In addition to the McDaniels case, Tepfer and his colleagues are preparing to challenge the convictions of a dozen other individuals who allege they were framed by members of the team, and at least one other attorney has several more post-conviction challenges in the works.

A clear pattern of police abuse and corruption having been established, where is the tipping point at which both justice and efficiency dictate exonerating all those whose cases conform to that pattern without having to litigate the cases one by one? There are a number of precedents for such group exonerations — notably the Rampart scandal in Los Angeles that resulted in some 156 criminal defendants having their convictions vacated, and the case of a rogue undercover narcotics agent in Tulia, Texas, that led to the exoneration of 37 defendants. More recently, there have been upwards of 700 convictions vacated by group exoneration in Philadelphia; and in Ohio the Conviction Integrity Unit of the Cuyahoga County Prosecutor’s Office is working to vacate all convictions tainted by a team of corrupt officers who operated in East Cleveland. “We didn’t go all the way to determine whether they were factually innocent or not,” said Jose Torres, the head of the unit, in an interview. “We were convinced that they were legally innocent, and that’s enough for us.”

Tepfer believes the time for such an approach is at hand in Chicago. “The question is simple,“ he told me. “Knowing what we know now about Watts and his team, would the States Attorney bring a case today that was based simply on the investigations of these officers? For the same reason, justice demands that any prior conviction based on this corrupt crew must be dismissed.”