Four-year-old Awra Ali was nearly blinded in a U.S.-led coalition strike in Mosul. She’s among the unprecedented number of civilians harmed in strikes in March. On March 17, Ala’a Ali left his wife and 4-year-old daughter at the home of relatives in the al Jadida neighborhood of Mosul and went home to wash before the morning call to prayer. Two minutes after he arrived home, a deafening explosion ripped through the neighborhood, engulfing the narrow street in black smoke.

“I hid in the corner of the building, and smoke crept in through the windows,” 28-year-old Ali told The Intercept. “Then the smell hit me, and I could barely breathe.” As soon as he could, he bolted from his hiding place and ran to the scene of the explosion, and the house where he had left his family.

It had been hit by an airstrike from U.S.-led coalition forces bombing Islamic State fighters.

Corpses were everywhere in the ruins of the building; more than 200 people were reportedly killed. Ali’s wife was among them, but he wouldn’t know that until Iraqi civil defense forces found her body later that day. Ali heard the sound of a child groaning underneath the rubble. It was his daughter, Awra. Her body was charred black with severe burns, and shrapnel had pierced through the side of her head, cutting across her face and sealing her eyes shut. Miraculously, she was breathing.

“I lifted her up and started carrying her through the streets, but then an ISIS sniper started to shoot at the army,” Ali said. “I finally was able to leave her at the neighbors for a few minutes and then take her to the field hospital once the fighting calmed down.” A hospital bed at West Erbil Emergency Hospital in Erbil, Iraq, on March 4, 2017.

Transferred between field hospitals and waiting for hours at checkpoints, Ali and Awra made it to the casualties ward of the West Erbil Emergency Hospital, 50 miles from Mosul and away from the front line. Doctors treated Awra’s infections and set her broken leg in a cast. A few days ago, they operated on her to dislodge a piece of shrapnel from her eye, restoring her vision for the first time since the airstrike.

Though her face is still scarred from burns and shrapnel cuts, Awra is enjoying her newly recovered sense of sight. She flipped through a picture book and played with leftover gauze, winding and unwinding a fake cast on her uninjured leg, laughing and energetic.

Her grandmother, Alia, tried to keep the child from itching the raw wounds on her head, scolding gently, “You can’t touch it — you will make it hurt more.” With Awra’s mother’s passing, Alia is tending to her full time. The doctors at West Erbil have been overwhelmed with patients from the airstrike in al Jadida, and so it is Alia who dresses Awra’s wounds.

“Every day, there is more shrapnel,” Alia said, sitting on the linoleum floor of the hospital, stroking the tuft of brown hair on Awra’s head that is growing back after it was shaved to remove the first pieces of metal when she arrived at the hospital. Bits of shrapnel are still coming out of her head wounds, and larger pieces remain lodged in her legs. 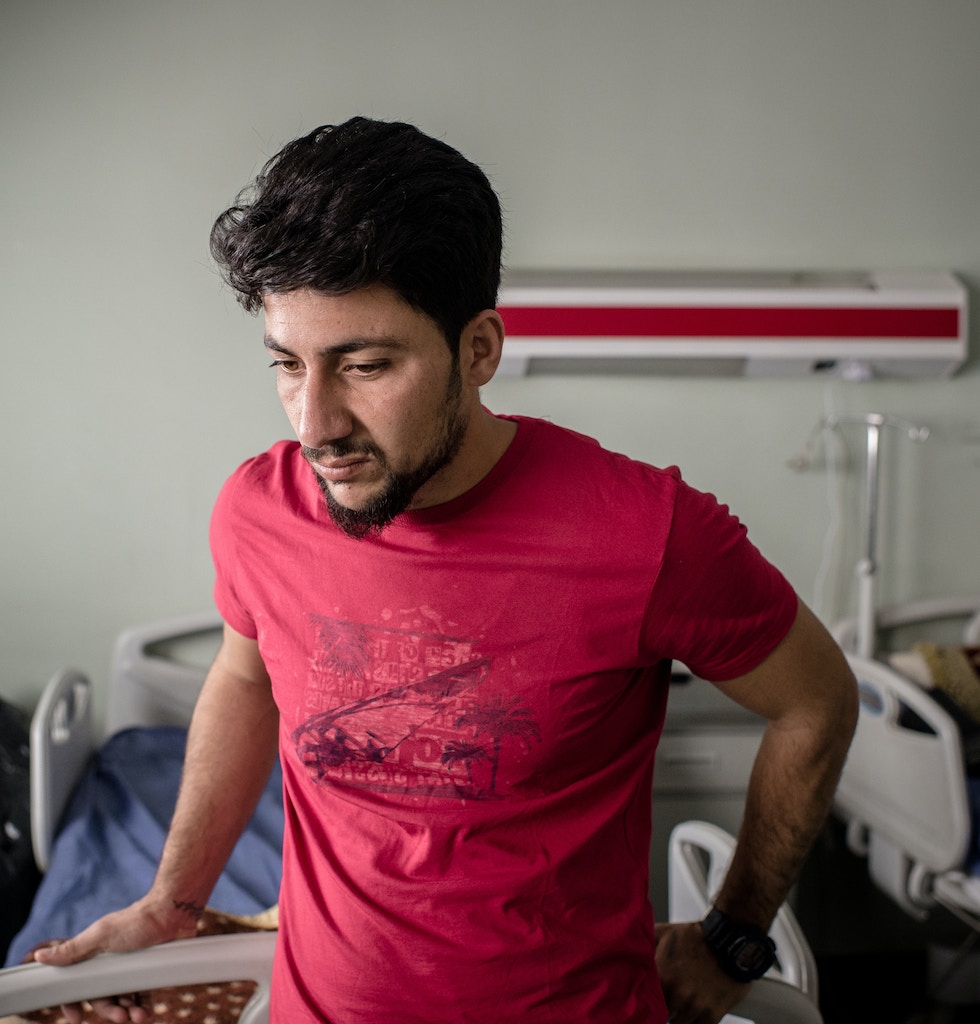 “These airstrikes are the biggest of all of the crimes in this war,” Alia said. “They’re killing families and children. We can’t live in safety, so long as they continue.”

Downstairs, Mubasher Zanoon sat next to his sleeping brother, who is his last remaining sibling after 20 of his family members perished in the same strike that nearly blinded Awra. The brother’s arm is pinned in place, barely intact.

“We don’t have anything left to go back to,” he said. Zanoon escaped the attack by seeking shelter in one of the adjacent homes, and it was four days before he was able to find his brother in the ruins.

The month of March saw an unprecedented number of civilian casualties from coalition airstrikes in both Iraq and Syria. While the strikes have been crucial in assisting the Iraqi Security Forces to recapture Mosul from the Islamic State, as the fight moves closer into the Old City, narrower streets and older buildings mean a greater concentration of civilians — and greater potential for deadly incidents like the strike that hit Awra.

The Pentagon has acknowledged that it struck a truck full of explosives in the area on March 17, and that the attack may have caused civilian deaths, though there are conflicting reports about the precise number of casualties and their cause. Maj. Gen. Najim al-Jabbouri, the Iraqi Security Forces commander in charge of Mosul operations, told The Intercept that there might have been an ISIS car bomb or “an ISIS booby trap that also contributed to civilian casualties.” He stated that the airstrike had hit one building, killing 101 civilians; an Iraqi civil defense official told the Los Angeles Times that there were several homes struck, and 278 victims had been removed from the rubble. Other local groups put the death toll even higher.

Adding to the confusion, the March 17 strike was not the only coalition airstrike in al Jadida that week; just four days before, another attack killed as many as 29 civilians, according to the U.K.-based monitoring group Airwars. Due to the neighborhood’s dangerous position near the front line, Iraqi civil defense forces did not reach the scene until after March 17, and some of the bodies included in their casualty count may have been rotting for days.

“What is absolutely clear is that a significant number of civilians died primarily as a result of incoming air and ground bombardments from both the U.S.-backed coalition and the Iraqi forces,” said Chris Woods, a conflict specialist with Airwars. In all, Airwars estimates a minimum of 2,900 civilians have died from coalition strikes in both Iraq and Syria since 2014. The Pentagon has acknowledged killing 229. 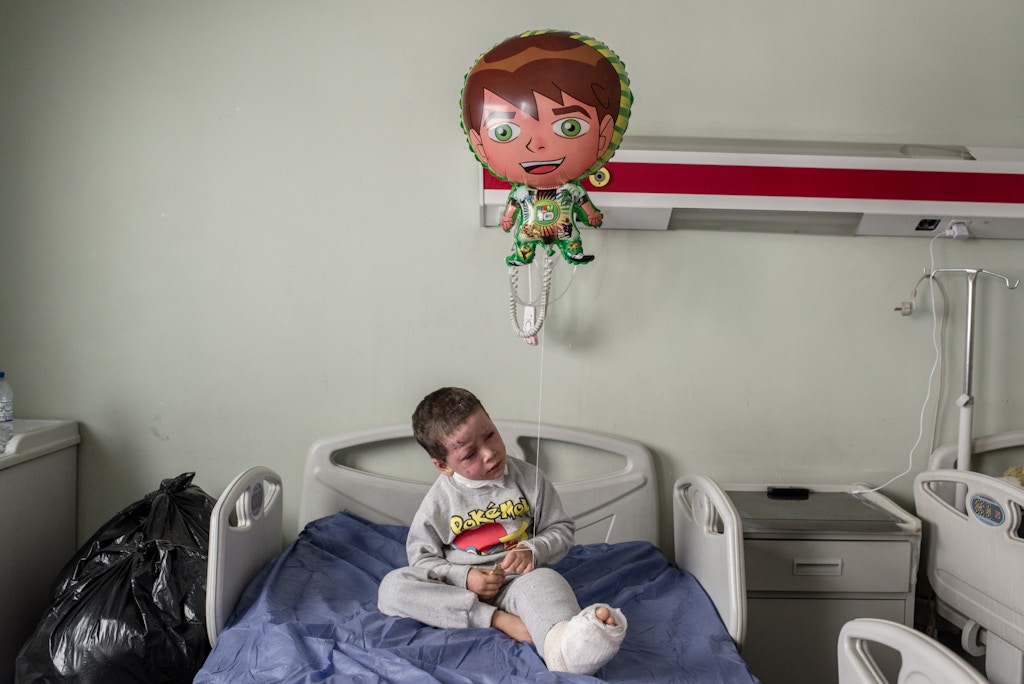 After almost one month in the hospital, Alia and Awra are packing their bags to leave. Ala’a Ali has rented a small house in one of the neighborhoods in eastern Mosul that has been taken back from ISIS, where he hopes Awra can complete her recovery and the family can start a new life with a modicum of peace.

“Because of this airstrike, we won’t be able to go home, to our old house,” Alia said, becoming tearful as she looked at the black garbage bags filled with the family’s belongings. “We tried so hard not to be refugees, but here we are.”