Macron-Le Pen: a Fight for the French Presidency and the Definition of Patriotism

As he claimed victory in the first round of France’s presidential election, Emmanuel Macron attempted to recapture the word “patriot” from Marine Le Pen. Before the final votes were counted in the first round of France’s presidential election on Sunday, projections made it clear that the final round run-off in two weeks will feature the pro-European centrist Emmanuel Macron against the anti-European candidate of the far-right, Marine Le Pen.

As Alberto Nardelli of Buzzfeed pointed out, despite fears of a late surge in support for the anti-immigrant nationalist Le Pen in the wake of recent terrorist attacks, as the results came in, they tracked almost exactly with the projections, and with pre-election opinion polls.

A race between the two outsiders, who eliminated the candidates of the main parties of the left and right, will now offer French voters a stark choice. The next president of France will either be a former investment banker, who strongly supports the European Union and multiculturalism, or an ultranationalist member of the European parliament, who wants a French exit from that union and a halt to immigration.

To their detractors on the left, that sets up an unappealing choice between a candidate who is liberal on social issues but also neoliberal on economics, and the heir to a far-right political dynasty founded by her father, a Holocaust denier.

For others, the existential threat posed by “the plague” of Le Pen’s extremism outweighed all other considerations, meaning that a vote for Macron would be necessary.

Speaking to his supporters late on Sunday, in front of the flags of both France and the EU, Macron cast the run-off election on May 7 as a contest between two definitions of what it means to be French, pledging to be “the president of all the people of France, the president of patriots faced by the menace of nationalists.”

Emmanuel #Macron says he will be a “President of all of France” as he heads into the second round against Marine Le Pen #France2017 pic.twitter.com/8gmrsC1MVa

During a televised debate before the first round, Macron, who is from Amiens, in northern France, had directly criticized Le Pen’s nationalist ideology as discredited by the continent’s history. “Nationalism means war,” Macron said. “I come from a part of France with too many of its cemeteries.”

His remarks on Sunday, as he claimed victory in the first round, were an attempt to recapture the language of patriotism from Le Pen and her fellow nationalists across Europe, who have called for a “Patriotic Spring” to sweep aside the multinational order in Europe and bring them to power.

Congratulations sent to Marine Le Pen.
A day of celebration for all Patriots in Europe.
On to the 2nd round and the Presidency! pic.twitter.com/bpZoKU2xvZ

Le Pen, who seemed to recognize the need to reach out beyond her white working class base, asked “all sincere patriots, wherever they come from, whatever their origin,” to support her in what she called a struggle against “savage globalization, which jeopardized our civilization.”

“It is time to free France”. Marine #LePen calls on “honest patriots” to seize “this historic opportunity” #France2017 pic.twitter.com/6EV4LD8nqC

It was not immediately obvious how, exactly, Le Pen might suddenly be able to appeal to voters of other ethnicities, however. As the columnist Pierre Haski pointed out on the eve of the vote, although Le Pen has spent years softening her party’s image, and “toned down the outrageous racism and banned neo-Nazi skinheads from her rallies,” in this campaign’s last days, she adopted a far more radical tone, in an apparent attempt to shore up her nationalist base.

That included appeals to the Pieds-Noirs, former colonists expelled from Algeria in the 1960s. In an interview days before the vote, as Le Pen seemed to focus on energizing her base, she argued that colonization brought a lot of good things to the subjugated, like “hospitals, roads, schools.”

On the question of how to deal with France’s colonial history, which is recent and raw for many of its former subjects, the contrast between Le Pen and Macron could hardly be more sharp.

That past matters, in part, to France’s present because French scholars, like Gilles Kepel, who study the appeal of violent Islamism to disaffected young men with roots in the former colonies argue that they have not forgotten about the brutal occupation of Algeria.

Macron took a very different approach during a visit to Algiers in February. “Colonization is part of French history,” he said in an interview on Algerian television. “I think it is inadmissible to glorify colonization — some wanted to do that in France ten years ago. You will never hear me say that kind of thing. I have always condemned colonization as an act of barbarism.”

“It is a crime, a crime against humanity — a real barbarity” he added. “It belongs to a past that we must face up to, while offering an apology to the people who were on the receiving end.”

Since Le Pen’s nostalgic tributes to the nationalism of a bygone era — and her xenophobic, anti-Muslim rhetoric — has been championed for years by Breitbart, the website of Donald Trump’s chief strategist, Steve Bannon, it is perhaps unsurprising that the White House seems to be rooting for her.

Le Pen’s rhetoric even seemed to infuse the inaugural address Bannon wrote for Trump in January. “When you open your heart to patriotism,” Bannon wrote, “there is no room for prejudice.”

President Donald Trump: "When you open your heart to patriotism, there is no room for prejudice." #Trump45 @POTUS pic.twitter.com/g0bAC52oAi

On the eve of the vote in France, Trump even predicted that the killing of a police officer in Paris, by a French-born Muslim, would “probably help” Le Pen.

Another terrorist attack in Paris. The people of France will not take much more of this. Will have a big effect on presidential election!

But the pundit in the White House appears to have badly miscalculated, with the results showing that Le Pen, who finished second, saw no boost from polls conducted before the attack.

French pollsters' final polls all had Le Pen at 22% or 23%. She ended up getting 22% today. No hidden far-right vote; no boost from attack.

There was also no evidence that Le Pen had benefited at all from a wave of disinformation and praise from Trump supporters on social networks.

Let’s keep defending our progressive values. Thank you for this discussion @BarackObama. pic.twitter.com/8rhNdHkLo8

At the end of the call, after Obama wished Macron luck and offered him campaign advice, the candidate said he would keep in touch “and see how to work together if I’m going to the run-off.”

On election night, some of Macron’s campaigners even told ABC News that Trump’s election had jolted them into taking the threat from Le Pen seriously.

While the American president might be surprised to find that the specter of Islamist terror did not hurt Macron’s chances, it was far less of a shock in France. As Pierre Haski pointed out in an interview with The Intercept, after the shooting last week, Macron was quick to remind voters that he was already taking advice on security from two popular figures in France’s current counterterrorism establishment: the defense minister, Jean-Yves Le Drian, and Jean-Michel Fauvergue, the former head of the elite police unit RAID.

The central question of the campaign’s second round is whether or not French voters will react to the presence of a far-right Le Pen on the ballot the way they did in 2002, when Le Pen’s father, Jean-Marie, lost to the center-right candidate Jacques Chirac by 64 points, thanks to tactical voting by the left.

Polls conducted before the first round suggest that this election will be much closer than 2002, but Macron is still favored to win by 20 points or more.

#LePen will be defeated, here's why : 62% of the French disagree with her ideas, and 58% think her party is a "danger for democracy". pic.twitter.com/uL47svFzrm

As soon as they were eliminated, both François Fillon, the mainstream Républicain candidate, and Benoît Hamon, representing the Socialist Party, urged their supporters to vote for Macron, and against Le Pen’s “extremism.”

Hamon calls to vote for Macron in the second round: "There is a distinction between a political adversary and the enemy of the Republic."

Less clear is how those who voted for the far-left candidate, Jean-Luc Mélenchon, will respond to his elimination. After the first-round results made it clear that he had come just short of making it to the run-off, his supporters defiantly chanted “President!” as he addressed them outside his election night party at Belushi’s Bar in Paris.

Although Mélenchon appeared to concede defeat in this election, he held out hope for the future and did not immediately endorse Macron.

Instead, as Raphaëlle Besse Desmoulières of Le Monde reported, he attacked the media elite and oligarchs who, he said, were “jubilant” at his elimination.

Mélenchon, visibly sour, says that he won't concede before midnight (official results) and seems to refrain from calling for Macron vote

Later in the evening, protesters marched in Nantes with a banner reading “Neither a Banker nor a Racist.” 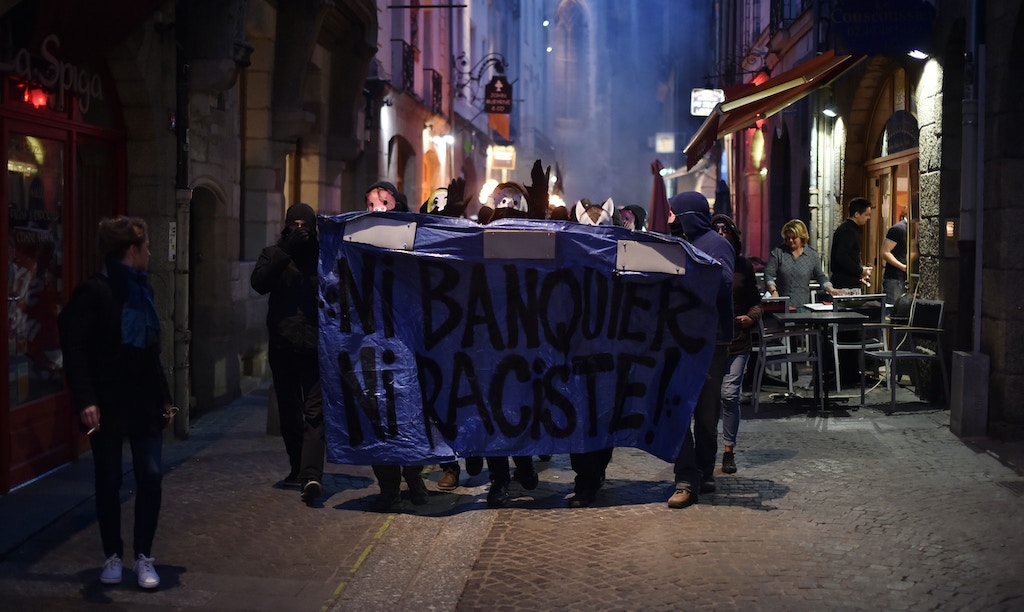 French anti-fascists marched in Nantes on Friday night, against both of the candidates to be France’s next president.

While some French voters will no doubt refuse to vote for a banker, the fact that Macron has actually had a job outside politics is appealing to others. Le Pen, like all of the other leading candidates, has spent her entire career as a politician, and has been accused of corruption in relation to the expenses she is paid as a member of the European parliament she hates so much.

Who will Fillon, Mélenchon and Hamon supporters back in the second round? New analysis from @alexandreafonso https://t.co/WrZLpdR0iP pic.twitter.com/KvQmITcVkF

By Monday morning, Mélenchon’s web-savvy team were gearing up for an online vote on the question of whether to vote for Macron or not at all. One of his activists, David Guiraud, told the BBC that even though he intends to vote for the lesser evil, “we have no hope in Emmanuel Macron,” who served as economy minister for the deeply unpopular President François Hollande. “It will be the exact same politics as Hollande” Guiraud said, adding that Macron’s presidency would only boost Le Pen further ahead of the next election in five years. But, he promised, even if Mélenchon himself did not run again then, his young supporters would be ready to fight the nationalists. “Fighting Marine Le Pen is in my DNA,” Guiraud said.

Indeed, as Mélenchon’s spokesman Alexis Corbiere noted, the far-left candidate took nearly a third of the votes of those under 24.

Since another 28 percent of young voters supported the former Socialist minister Macron or the Socialist candidate Hamon, that suggests progressives make up a clear majority of France’s youth.