A Short History of Presidential Obstruction of Justice

Relevant to Donald Trump, both Richard Nixon and Bill Clinton were accused, in articles of impeachment, of having “prevented, obstructed and impeded the administration of justice.” 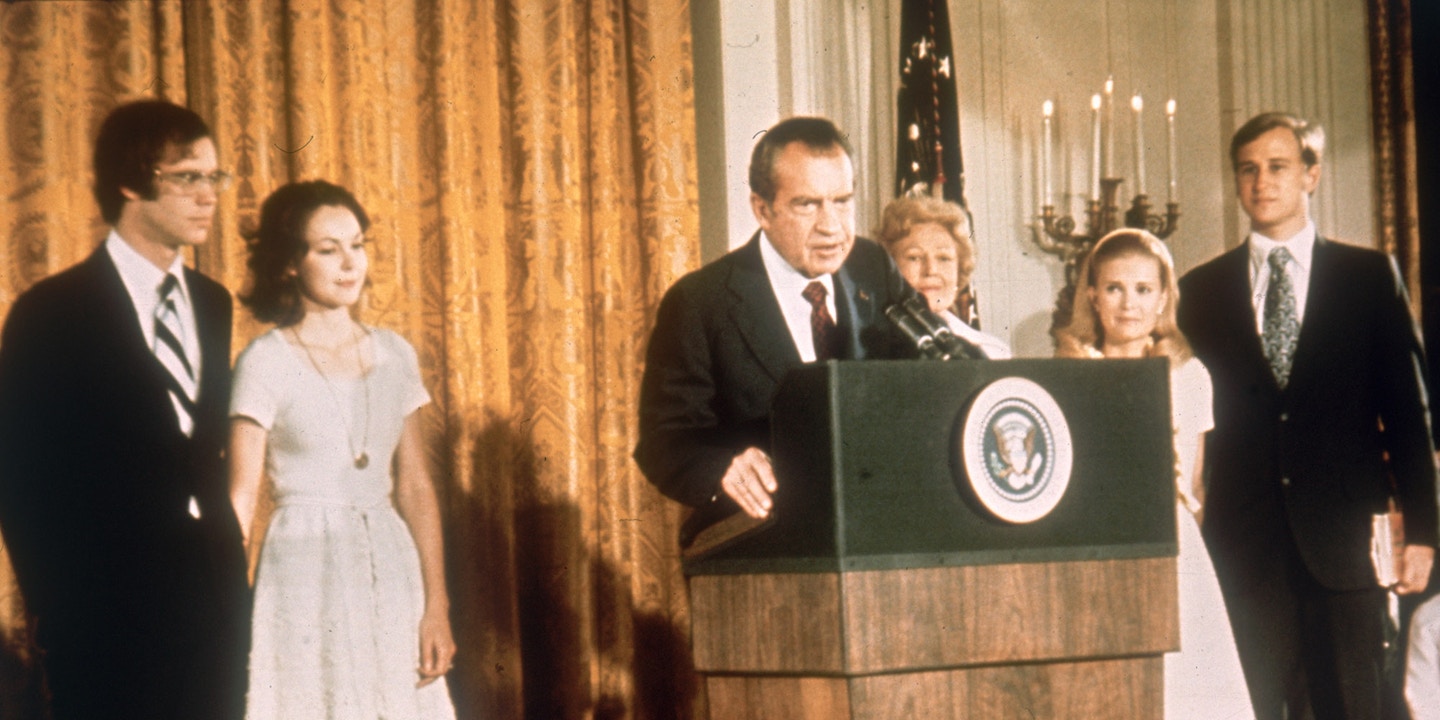 Update: May 17, 2017, 6:35 p.m.
The Department of Justice has announced the appointment of Robert S. Mueller, former director of the FBI, as special counsel to oversee its investigation of Russian meddling in the presidential election and possible connections to associates of President Donald Trump. “It is in the public interest for me to exercise my authority and appoint a special counsel to assume responsibility for this matter,’’ said Deputy Attorney General Rod J. Rosenstein in a statement. “My decision is not a finding that crimes have been committed or that any prosecution is warranted. … What I have determined is that based upon the unique circumstances, the public interest requires me to place this investigation under the authority of a person who exercises a degree of independence from the normal chain of command.’’

What exactly is obstruction of justice? And has President Donald Trump engaged in it, by reportedly telling FBI Director James Comey that he hoped Comey would “let go” of the bureau’s investigation of Trump’s National Security Adviser Michael Flynn, and then firing Comey months later?

The answer to the first question is: Criminal obstruction of justice is broadly defined, and according to 18 U.S. Code § 1503, includes “any threatening letter or communication [which] influences, obstructs, or impedes, or endeavors to influence, obstruct, or impede, the due administration of justice.”

The Criminal Resource Manual for U.S. attorneys points out that “the Supreme Court has concluded that ‘endeavor’ is broader than ‘attempt’” — and quotes the court stating that in the statute it means “any effort or essay to accomplish the evil purpose that the section was enacted to prevent.” Therefore, says the Justice Department, “it follows that an endeavor to obstruct justice need not be successful to be criminal.”

But the answer to the second question is this: Trump may or may not have engaged in obstruction of justice under normal judicial standards, but that’s irrelevant — the only thing that matters is whether Congress decides he did so under whatever standards they believe are appropriate.

It’s nearly certain that presidents can’t be prosecuted under criminal law while in office. No one’s ever made a serious attempt to do so, and while no court has ever ruled on whether it’s possible, a 2000 analysis by the Department of Justice agreed with the department’s 1973 examination of the same issue that “a sitting President is constitutionally immune from indictment and criminal prosecution.” (The author of the 2000 memo, Randolph D. Moss, went on to be appointed by President Obama to the U.S. District Court for the District of Columbia.)

There is, however, a remedy for presidential misconduct, provided by Article II, Section 4 of the Constitution: impeachment and removal from office.

According to Section 4, any civil officer of the United States — which of course includes the president — can be removed from their position for “Treason, Bribery, or other high Crimes and Misdemeanors.”

The process begins in the House of Representatives. Impeachment is the equivalent of an indictment in the regular justice system. If a majority of the House approves one or more articles of impeachment, a trial is held in the Senate under the supervision of the chief justice of the Supreme Court, with senators acting as the jury. If two-thirds of the Senate votes to convict, the official is removed from office — and generally barred from ever again holding any other position, as the Constitution puts it, “of honor, Trust or Profit under the United States.”

What complicates the issue is that, while treason and bribery are relatively clear offenses, the Constitution is silent on what “other high crimes and misdemeanors” might be.

This is a particular problem because only two presidents, Andrew Johnson in 1868 and Bill Clinton in 1998, have ever been impeached and tried in the Senate, and neither was convicted. And Richard Nixon, the president most associated with impeachment, in fact was not impeached. Instead, after the House judiciary committee approved three articles of impeachment, he saw the writing on the wall and resigned before they were voted on by the full House.

It is true the Senate has tried 13 lesser officials, mostly judges, who’d been impeached by the House. But that’s still not much to go on; impeachment is essentially a justice system that has held only 15 trials total in 229 years, so there’s little precedent for any part of the process. This means that impeachment is inevitably, irredeemably political: An impeachable offense is whatever Congress decides it is, and no action is impeachable if Congress doesn’t want it to be.

That said, when attempting to impeach presidents, Congress has often tried to hew to criminal law to some degree — which is where obstruction of justice has come in, twice.

Congress did not accuse Johnson of obstruction of justice, instead claiming he was guilty of violating the 1867 Tenure of Office Act, a law which was eventually repealed 20 years later, in 1887, and is now forgotten.

But the first article of impeachment against Nixon adopted by the House judiciary committee in 1974 centered on an accusation that he had “prevented, obstructed and impeded the administration of justice” — similar to the criminal statutory language of 18 U.S. Code § 1503 quoted above, which may be of interest to Donald J. Trump, that forbids any action that “influences, obstructs, or impedes … the due administration of justice.”

Some of the accusations against Nixon in Article I have, at least to date, no parallel with Trump. For instance, the judiciary committee charged Nixon with suborning perjury and withholding evidence. Yet other parts of Article I sound quite familiar. Nixon was, the judiciary committee said, guilty of “interfering or endeavoring to interfere with the conduct of investigations by … the Federal Bureau of Investigation.” This did not include firing an FBI director, but rather a vague offer from a Nixon underling to the judge overseeing the prosecution of Daniel Ellsberg that the judge might be hired as FBI director. According to the Bill of Particulars attached to the three articles of impeachment, this violated 18 U.S. Code § 1503.

Another aspect of Nixon’s obstruction of justice was that he was responsible for “making or causing to be made false or misleading public statements for the purpose of deceiving the people of the United States into believing that a thorough and complete investigation had been conducted with respect to allegations of misconduct on the part of personnel of the executive branch.” Trump has of course called the various investigations of Russian interference “a total hoax” and a “taxpayer funded charade” that “should have been over with a long time ago.”

Moreover, the committee’s Article II was in some ways similar to the first, charging Nixon with “impairing the due and proper administration of justice and the conduct of lawful inquiries.” Nixon’s alleged actions included having “knowingly misused the executive power by interfering with agencies of the executive branch, including the Federal Bureau of Investigation.” All three articles concluded that Nixon’s conduct warranted “impeachment and trial, and removal from office.”

In Clinton’s impeachment, the House Judiciary Committee adopted four articles, two of which were approved by the full House. One of the two, Article III, used exactly the same language as Article I from 1974, accusing the president of having “prevented, obstructed and impeded the administration of justice.”

However, none of the charges in 1998’s Article III against Clinton involved the FBI or were of the level of seriousness of the other accusations against Nixon. Instead, the judiciary committee claimed Clinton was guilty of, among other things, encouraging Monica Lewinsky to file a false affidavit and tampering with a witness.

That brings us to Trump and the possibility that he could be impeached for obstruction of justice.

Significantly, Jason Chaffetz, the Utah Republican who chairs the House oversight committee, sent a letter Tuesday to the FBI requesting any memoranda created by Comey recording his communications with Trump. The committee needs them, wrote Chaffetz, to discover whether Trump “attempted to influence or impede the FBI’s investigation” of Flynn. This language is clearly drawn from the various statutes on obstruction of justice — in particular from 18 U.S. Code § 1503, which, again, makes it illegal to take any action which “influences, obstructs, or impedes, or endeavors to influence, obstruct, or impede, the due administration of justice.”

None of this, of course, means it’s likely the Republican-controlled Congress will produce articles of impeachment, or pass them out of the House, or vote to convict Trump in the Senate. But in the event that that comes to pass, the standard criminal definition of obstruction of justice will suddenly become relevant for Trump — because while presidents can’t be prosecuted while they’re in office, once they leave they can be prosecuted for crimes they committed while there.

That’s why Gerald Ford pardoned Nixon after he resigned. Nixon, he wrote, “has become liable to possible indictment and trial for offenses against the United States” — but that had to be stopped because “the tranquility to which this nation has been restored by the events of recent weeks could be irreparably lost by the prospects of bringing to trial a former President of the United States.”

Given the nontranquil reaction to Ford’s pardon, it might be politically difficult for President Pence to try it again. So just in case Trump needs to know, the maximum penalty for obstruction of justice under § 1503 is 10 years imprisonment – per count.

Top photo: Richard Nixon at the White House with his family after his resignation as president, on Aug. 9, 1974.