Rod Rosenstein, Dana Boente, and Andrew McCabe are in charge of the volatile investigation into connections between Russia and the Trump election campaign. To serve under Donald Trump is to be a disposable commodity whose value fluctuates with the master’s moods. This was true on “The Apprentice” and it’s true in the administration, where personnel matters have taken on a gameshow quality. Turnover has been especially rapid among those responsible for heading up the investigation into ties between Trump’s circle and the Russian government. This week, FBI Director James Comey joined Mary McCord, Sally Yates, and Preet Bharara as senior law enforcement officials who either resigned under Trump or were fired outright. As new officials are appointed to take their places, it’s getting hard to keep track of who is responsible for the Trump-Russia investigation. Two of these key officials (Dana Boente and Rod Rosenstein) are Trump appointees; the third (Andrew McCabe) will likely be replaced by a Trump pick soon. Former Jobs: Acting attorney general (after the firing of Sally Yates in February 2017 and before the confirmation of Jeff Sessions as attorney general in April 2017); U.S. attorney for the Eastern District of Louisiana

Why He Matters: Both of Boente’s current roles involve supervising the ongoing investigation into the Russian government’s ties to Trump’s campaign. As discussed by former FBI Director Comey in congressional testimony last week, and reported by CNN, a grand jury is now gathering evidence in the Eastern District of Virginia as part of its investigation of Michael Flynn, Trump’s former national security adviser, for his ties to the Russian government. Comey also described the broader Russia probe as a “counterintelligence investigation,” a category of inquiry overseen by the National Security Division, which Boente headed after the resignation of Mary McCord last month.

Bio: Boente is a career prosecutor who has been with the Department of Justice since 1984, serving under administrations from both parties. Boente oversaw the prosecution of former Virginia Gov. Bob McDonnell for corruption before the Supreme Court threw out the conviction in 2016, a decision that effectively narrowed the definition of political corruption. In 2015, Boente was nominated by President Obama to serve as the U.S. attorney for the Eastern District of Virginia — a post that handles a lot of national security cases due to its proximity to the Beltway. After acting Attorney General Sally Yates was fired for refusing to defend Trump’s Muslim ban, Boente was appointed acting attorney general and promptly reversed course, unsuccessfully defending it in court. (The Department of Justice has appealed.) Former colleagues told the New York Times that Boente wasn’t playing politics — he probably believes that a ban is legal. In April, Boente was tapped by Jeff Sessions to lead the department’s National Security Division, which, along with the FBI, is responsible for the Russia investigation. In that role, Boente is also at the center of the Justice Department’s efforts to arrest and prosecute WikiLeaks founder Julian Assange, a move that could set a precedent that severely restricts press freedom. 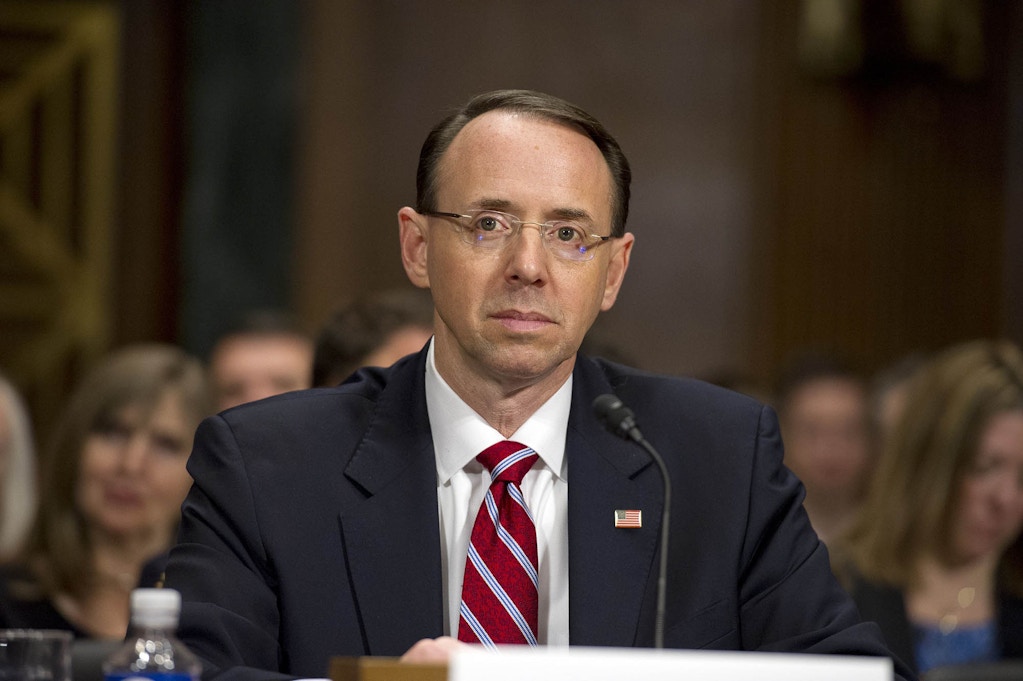 U.S. Attorney for the District of Maryland Rod J. Rosenstein gives testimony before the Senate Committee on the Judiciary in Washington on March 7, 2017.

Why He Matters: Sessions promised not to weigh in on the Trump-Russia investigation; nevertheless, he appears to have been instrumental in Trump’s decision to fire Comey, who was leading the FBI’s work on the investigation. If one can still take Sessions at his word, it is Rosenstein who is supposed to be supervising all Trump-Russia matters at the Department of Justice. Rosenstein also wrote the lengthy memo that comes the closest to providing a justification for Comey’s firing.

Bio: In his 12 years working as a prosecutor in Maryland, Rosenstein took on matters ranging from municipal corruption to white-collar crime to firearms and gangs. He investigated leaks relating to U.S. cyber efforts against Iran under President Obama and investigated Bill and Hillary Clinton’s real estate investments as a Justice Department lawyer working for Kenneth Starr, the independent counsel whose investigations led to the most recent impeachment of an American president. This profile by CNN suggests that Rosenstein is a careful and thorough professional. It records the surprise of colleagues that he would be the one to wind up providing Trump and Sessions with the basis for getting rid of Comey. In an earlier profile by the Washington Post, Philip Heymann, who served as deputy attorney general under Bill Clinton, praises Rosenstein’s trustworthiness and ethics. It notes that Rosenstein is rarely home in time for dinner and often picks up where he left off at home, working late into the night. During his confirmation hearings earlier this year, Rosenstein refused to say whether he would appoint a special counsel to investigate Trump’s Russia ties and promised to be independent. The Washington Post has reported that Rosenstein threatened to resign upon realizing that the White House was using his memo to justify Comey’s dismissal. “If the president has committed a crime and I believe the president is culpable, then I wouldn’t follow the president’s advice,” he said. On Thursday morning, the New York Times editorial board published an open letter to Rosenstein, charging Trump with “exploiting the integrity you have earned over nearly three decades in public service” and calling on Rosenstein to appoint a special counsel to “get to the bottom of whether and how Russia helped steal the presidency for Mr. Trump.” 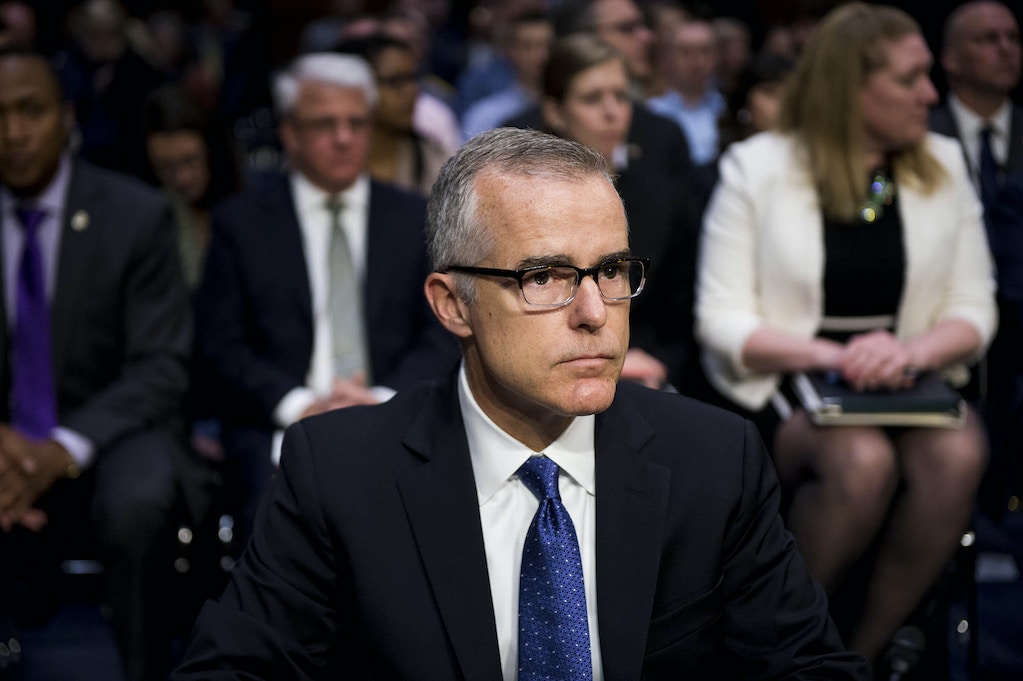 Acting FBI Director Andrew McCabe prepares to testify during the Senate Intelligence Committee hearing on “World Wide Threats” on May 11, 2017.

Why He Matters: Until Trump nominates a replacement for Comey and maneuvers him or her through Senate confirmation (there’s likely to be a fight no matter who the candidate is), McCabe will be in charge of the bureau’s end of the Trump-Russia investigation. He’s politically vulnerable. Unlike Rosenstein and Boente, he wasn’t picked by Trump for his current job and he could be next in line for firing. According to a source who spoke with ABC News, McCabe has talked by phone with FBI field offices around the country and asked them to carry on “business as usual.”

Bio: McCabe spent 20 years in the FBI’s New York field office before Comey promoted him to deputy director last year. He had significant responsibilities in the investigation of Hillary Clinton’s emails and is currently being investigated by the Department of Justice’s inspector general for not recusing himself from that matter: Republican senators and others have complained that McCabe should have taken himself out of investigation because his wife, Jill McCabe, made a run for the Virginia state Senate in 2015 and accepted nearly half a million dollars in contributions from a political action committee connected to Virginia Gov. Terry McAuliffe. McAuliffe chaired Clinton presidential campaigns in 1996 and 2008. McCabe also figures into a second controversy surrounding contacts between Comey and the Trump White House. The Atlantic and others have reported that the White House asked Comey and McCabe to dispute reports of contacts between the Trump campaign and Russian officials. If those reports are true, Comey and McCabe appear to have refused, but the contacts themselves could violate guidelines designed to shield the bureau from political pressure.