The first thing Congress should do is demand that Trump stop hiding behind his subordinates and explain, in his own words, why he fired James Comey. 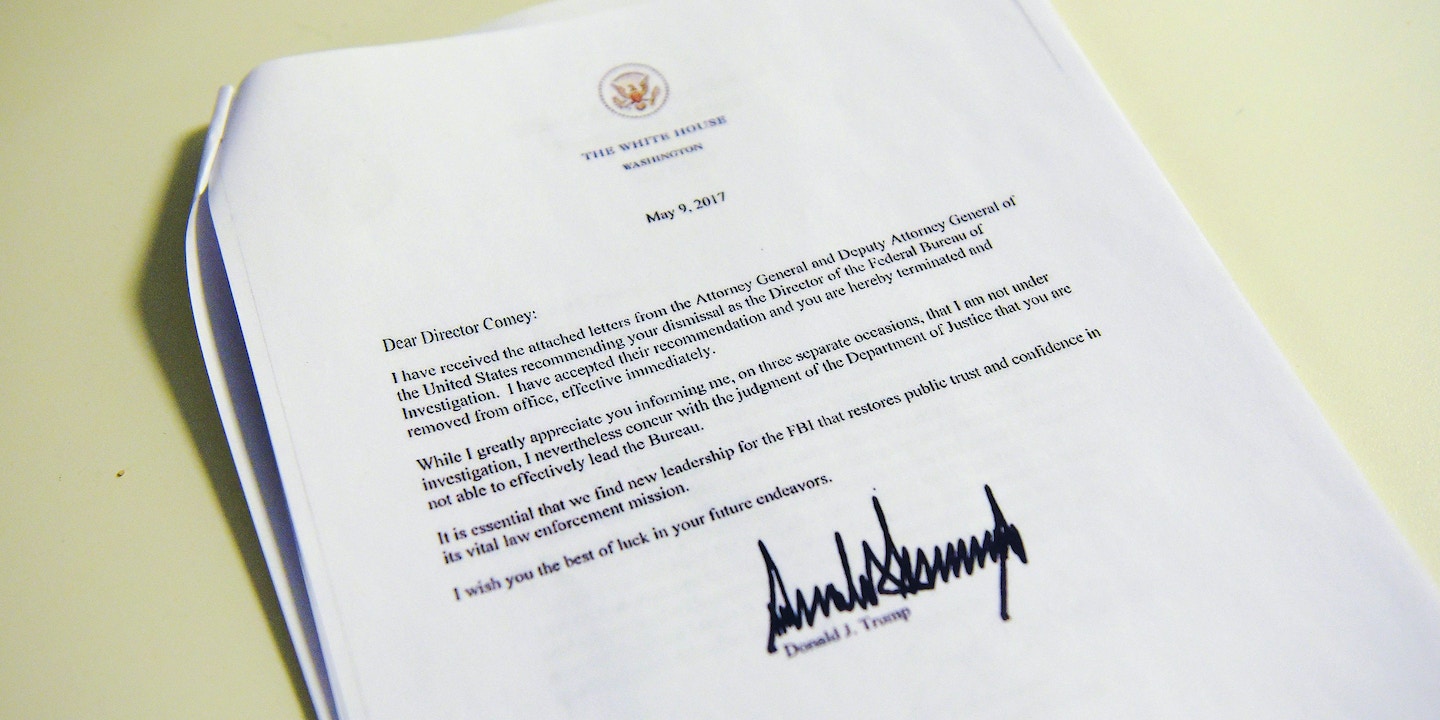 We know that Donald Trump fired James Comey, his FBI director and perhaps the greatest threat to his presidency, yesterday afternoon. What we don’t know, at least not in any official way, is why. Almost as striking as Trump’s sudden decision to dismiss Comey are the wildly disparate reasons that he and his administration have put forth for taking such drastic action, and the presumption that Trump does not owe the country a substantive explanation. “He’ll do it when he wants to,” said White House counselor Kellyanne Conway on CNN this morning. Having this president hand-pick his own FBI director, as many have noted, poses a serious threat to our democracy. So does the notion that he can fire the old one and never have to say why.

On Tuesday afternoon, Trump released three documents relating to Comey’s firing — one from Attorney General Jeff Sessions, one from Rod J. Rosenstein, Sessions’s deputy, and one from Trump himself. Trump’s letter is short — just 121 words. There is one sentence of reasoning, a sarcastic one, which leans on “the judgment of the Department of Justice.” 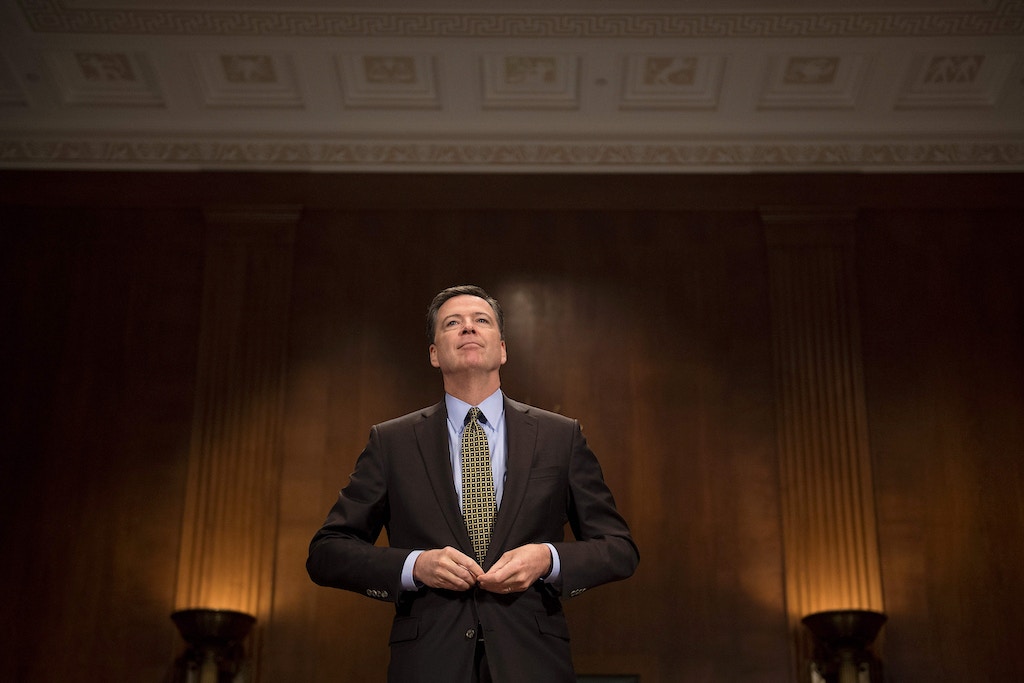 FBI Director James Comey prepares to testify before the Senate Judiciary Committee on Capitol Hill in Washington on May 3, 2017.

So what was the judgment of the Department of Justice? Sessions’s letter is only slightly longer — 157 words. It vaguely says that the head of the FBI should be someone “who faithfully follows the rules and principles of the Department of Justice.” Instead of explaining how Comey broke those rules, Sessions, like Trump, leans on his subordinate to churn out the fine print. He says that his conclusions are also “based on my own evaluation.” He gives no indication as to what his own evaluation was based on.

The third document, a “Memorandum for the Attorney General” from Deputy Attorney General Rosenstein, is much longer. Some reports have Rosenstein working on the memo for a week or more; nevertheless, it bears the same date as Trump’s letter:

The subject makes no mention of Comey or the FBI’s leadership. Instead, it is “Restoring Public Confidence in the FBI.” Most of the memo is devoted to Comey’s handling of the investigation into Hillary Clinton’s emails. Rosenstein criticizes Comey for publicly stating that the email investigation was closed in July 2016 and then sending his controversial letter to Congress, just before the November election, that it was open once again. He quotes many former attorneys general and deputy attorneys general who agree that Comey made some big mistakes. He refers to the department’s “longstanding policy that we refrain from publicizing non-public information.” Those words could refer to Clinton. They could also refer to Comey’s hints last week in congressional testimony about a federal grand jury, which is now collecting evidence of Russian influence over the Trump campaign in the Eastern District of Virginia. They seem to stand in direct contradiction to Trump’s own words about the Clinton emails:

FBI Director Comey was the best thing that ever happened to Hillary Clinton in that he gave her a free pass for many bad deeds! The phony...

But what’s most notable about the Rosenstein memo is what it does not say. The memo does not explicitly recommend that Comey should be fired, let alone give a reason. The closest Rosenstein comes to doing so is at the letter’s conclusion:

One could interpret Rosenstein’s words as saying he would be satisfied if Comey owned up to his mistakes. Rosenstein does not go into what he considers “the necessary corrective actions” to be, or whether Comey was ever given a chance to implement them. And so “the judgment of the Department of Justice,” which Trump claims is the underlying cause of Comey’s firing, remains opaque.

The aftermath of Comey’s firing will play out over weeks, if not months. It may well be remembered as the beginning of the end of Donald Trump’s abbreviated presidency. Getting rid of Comey was obviously Trump’s decision; the first thing Congress should do is demand that Trump stop hiding behind his deputy attorney general and explain, in his own words, why he did it. The only other dismissal of an FBI director — the firing of William Sessions by President Bill Clinton in 1993 — was backed by a 193-page report from the FBI’s own Office of Professional Responsibility, which detailed Sessions’s misconduct.

Over the last few hours, Trump’s mysterious and capricious reasoning has created a sense of chaos around the White House. His aides are struggling to explain an event they themselves do not understand. This morning, Trump repeated the platitudinal desire to rebuild the FBI:

James Comey will be replaced by someone who will do a far better job, bringing back the spirit and prestige of the FBI.

According to the Washington Post, White House press secretary Sean Spicer hid in the bushes to avoid being questioned on the reasoning behind Trump’s actions. When pressed, he put the decision on Rosenstein, saying, “It was all him … that was a DOJ decision.”

“There is a lot of cleaning house that needs to be done,” one anonymous official told CNN. “This is a shitshow,” said another to CNN via text.

Last night, I called Roger Stone, a member of Trump’s eccentric kitchen cabinet, who reportedly urged the president to fire Comey, reports that Trump himself denied. “He was basically becoming J. Edgar Hoover,” Stone said. “He wasn’t subject to the rule of either the executive or the Congress. He acted as if he was above civilian rule.” Stone was referring to Comey, of course, but his words fit Trump like a glove.

Top photo: A copy of the termination letter to FBI Director James Comey from President Donald Trump is seen at the White House on May 9, 2017, in Washington.