The American system of checks and balances is out of sync. The Republicans won’t stop Trump. The Democrats can’t. The courts and media face obstacles.

“You’re fired!” That’s what Donald Trump would bark from his boardroom chair at the end of each episode of “The Apprentice.” For years, millions of Americans would smile, laugh, and even cheer in front of their television sets as the property tycoon performed his signature move.

There is little to laugh about this week. The firing of FBI Director James Comey by President Trump will be remembered as a dark and depressing day in the downward spiral of American democracy. It’s difficult to disagree with the scathing assessment of CNN’s senior legal analyst, Jeffrey Toobin, who described the sacking as a “grotesque” abuse of power. “This is the kind of thing that goes on in non-democracies,” he told host Wolf Blitzer in a clip that has since, deservedly, gone viral. “They fire the people who are in charge of the investigation.” Toobin continued: “This is something that is not within the American political tradition. … This is not normal, this is not politics as usual.”

There is indeed nothing “normal” about removing the head of the FBI from his post less than four months into a new presidency — and an FBI boss who has been credited with delivering that president his election victory, against the odds. You have to go all the way back to 1993 to find the last — and only other — time a president (William J. Clinton) decided to dismiss his FBI chief (William S. Sessions). And the latter, unlike Comey, was accused of a long list of bizarre ethics violations including, as the Washington Post reported at the time, “charging the government for personal travel,” diverting FBI aircraft to pick up his wife, Alice Sessions, in other cities, and deploying FBI cars “to take her to get her nails done.”

Nor is there anything “normal” about an American president sending his long-standing head of private security, and former bodyguard, to hand-deliver a letter of termination to his FBI chief. There are tinpot dictators in Africa who would have avoided doing that simply in order to avoid giving the wrong impression. Tinpot Trump, however, didn’t care. (His brutish security chief, Keith Schiller, lest we forget, spent the presidential campaign smacking Latino protesters and manhandling Latino reporters on behalf of his boss.)

Acting Attorney General Sally Yates was also sacked by Trump via hand-delivered letter. The U.S. attorney for the Southern District of New York, Preet Bharara, was sacked by Trump after he refused to resign. What do Comey, Yates, and Bharara have in common? “They all were investigating Trump when they got fired, and there’s a Russia thread in each of their cases,” observes Shannon Vavra of Axios.

“You’re fired!” This is how Tinpot Trump deals with those who seek to hold him to account. We can’t say we weren’t warned. He has, after all, never hidden his authoritarian inclinations, his brazen disregard for political, legal, and social norms. 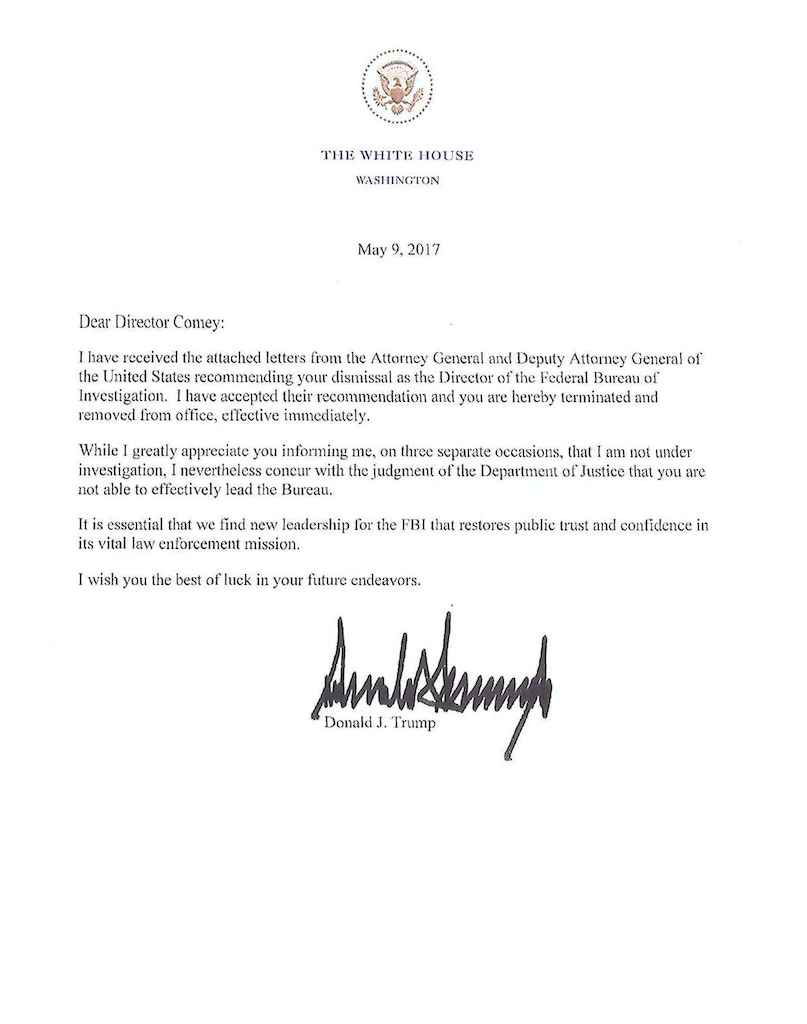 This handout image released on May 9, 2017, by the White House shows a copy of the termination letter from President Donald Trump to FBI Director James Comey.

Trump, the property tycoon, slammed Mikhail Gorbachev for not responding to anti-Soviet protesters with a “firm enough hand,” while gazing in awe at the Chinese show of “strength” against the Tiananmen Square protesters in 1989.

Trump, the presidential candidate, lavished praise on Vladimir Putin as a president who “has been a leader far more than our president [Obama] has been” and who had “great control over his country.”

Trump, the president, in his very first speech to the nation, did his best impression of super-villain Bane from “The Dark Knight,” delivering a dystopian address on “American carnage” while vowing to “make America strong again.” On Twitter, he has referred to the media as an “enemy of the American people” and denounced a “so-called judge” who dared to rule against his “Muslim ban.”

Is it any wonder that experts on authoritarianism and fascism have been sounding the alarm bell for many months now? Listen to Ruth Ben Ghiat, the New York University history professor who has written a book on the rise of Mussolini in pre-war Italy. Trump “is an authoritarian,” she told me on my Al Jazeera English show in February, “who has the ability to stretch the boundaries of democracy to something unrecognizable.”

Is it any surprise that commentators have been invoking President Richard Nixon’s infamous “Saturday Night Massacre,” in which he fired Watergate special prosecutor Archibald Cox? Listen to John Dean, former White House counsel to Nixon, who believes Trump is much worse than Nixon and told The Atlantic in January: “The American presidency has never been at the whims of an authoritarian personality like Donald Trump.”

With Nixon, the checks and balances worked. He was stopped. Eventually. Who will stop Tinpot Trump? The congressional Republicans? You’re kidding, right? They have marched in partisan lockstep with their Dear Leader since he won their party’s presidential nomination last summer.

Consider their treatment this week of Yates, who testified in front of the Senate on Monday. Sen. Ted Cruz, whose wife Trump mocked as ugly and whose father he accused of colluding in the assassination of JFK, decided to attack Yates on behalf of the president over her refusal to defend Trump’s “Muslim ban” in court.

Sen. Lindsay Graham, who Trump has called “incompetent” and an “embarrassment,” decided to echo a key Trump talking point by asking Yates about who leaked classified information about former National Security Adviser Michael Flynn’s ties to Russia, rather than about the substance of those ties.

These are the elected representatives in whose hands rests the fate of the U.S. Republic? Seriously?

Who will stop Tinpot Trump? The Democrats? They will line up to appear on MSNBC and loudly demand a special prosecutor; they may even become bold enough to talk impeachment. But they are the minority party in both chambers. They don’t have the votes to demand anything. Nor do they have much credibility in the eyes of the public — a recent poll revealed the Democrats to be less popular than the Republicans, Vice President Mike Pence, and Trump himself.

Who will stop Tinpot Trump? The courts? Here and there, maybe, but over one and possibly even two terms? And as the president’s patronage powers kick in? I doubt it. Remember: The Trump effect on the U.S. judiciary will go far beyond the appointment of ultra-conservative Neil Gorsuch to the Supreme Court. Trump has inherited more than 100 court vacancies from Obama, which is more than double the number of vacancies Obama inherited from Bush in 2009.

Who will stop Tinpot Trump? The U.S. media? Give me a break! So much of the so-called fourth estate has embarrassed itself with fawning and deferential coverage of the president; cable news sees Trump less as a threat to democracy and more as a cash cow and ratings boon. In recent weeks, CBS Sunday morning anchor John Dickerson was escorted out of the Oval Office after he asked Trump a question the latter didn’t like, while CNN’s Van Jones and Fareed Zakaria fell over one another to declare Trump “presidential” because he gave a good speech and launched a few missiles at Syria.

American checks and balances are out of whack. The firing of the FBI director is only the beginning. There will be more sackings; more political corruption; more abuses of power. And, again, we can’t say we weren’t warned. Tinpot Trump, cautioned John Dean back in January, “is going to test our democracy as it has never been tested.” Whether American democracy is up to that test is another matter.