Robb Ryerse lives in a solidly-red district but supports a public option for healthcare and wants to protect the environment. The Republican Party wasn’t always an organization dominated by the ultra-wealthy. While today most of its federal representatives in Congress are trying to pass a gigantic tax cut for the rich disguised as a health care bill, it was once a party that liberated American slaves, established the Environmental Protection Agency, and broke up enormous business monopolies.

That’s the GOP that 42-year-old Arkansas pastor Robb Ryerse is trying to revive. He is the first Republican to be endorsed by Brand New Congress, a grassroots group started by former Bernie Sanders staffers to encourage Democrats and Republicans who have never served in office before to run for Congress.

Ryerse is running in the primary to unseat incumbent GOP Rep. Steve Womack, who has served in Congress since 2011. The district is heavily Republican; in 2016 Womack won with 77 percent of the vote. That makes the district essentially a one-party state: All of the serious political competition happens within the Republican Party.

In an interview with The Intercept, Ryerse explained why he is trying to unseat Womack and how the Republican Party needs to change to become relevant to the lives of ordinary Americans.

“I grew up as a third-generation pastor and after pastoring in churches up North for about 10 years I went through kind of a spiritual crisis and needed to be part of a church that was welcoming of all people, a church that accepted that people have doubts and questions and that’s not a threat to faith. So my wife and I moved our family to northwest Arkansas where we started a church called Vintage Fellowship,” he explained. “I’m the kind of person who believes in big ideas that are daring enough that they might work and starting a new kind of church was kind of a new kind of idea. The reason I’m running for Congress is because I’ve had this kind of big daring idea that I can’t get out of my head. And that’s that we’ve gotta change the way we do politics in America.”

But he believes that Republicans can get back on the right track if they look to their past. “You could look at President Reagan signing immigration reform, you could look at Richard Nixon helping establish needed environmental protections, you could talk about Dwight Eisenhower talking about the military-industrial complex, I think there’s lots of examples if you kind of look back at Republicans who really were on the right side of history in a number of ways.”

He described his opponent Congressman Womack as a “good man” but said he has failed to represent the district adequately. He cited a letter Womack wrote to former Secretary of State John Kerry suggesting Syrian refugees were a threat to the people of Arkansas as one of the things that pushed him to run.

“It was one of those fearmongering kind of ‘We don’t want those people in our town’ kind of letters. And that was one of those things that really kind of planted a seed for me, like, ‘Wow, here’s someone who’s not representing the really just and generous things that are happening in our district,'” Ryerse reflected. “And I think Arkansans deserve someone who will listen to them and represent them better and who will be an independent voice on their behalf.”

Ryerse wants to see a Republican Party that strikes a more accepting tone on immigration. “I think the wall is both a terrible waste of money as well as a symbol that just does not reflect what America’s values are. Ronald Reagan talked about our country being a shining city on a hill. The wall doesn’t communicate that kind of optimism that kind of welcoming. I think in terms of helping Republicans see that, I think Republican leadership who are really passionate on the immigration issue really need to dial back the fearmongering and the dehumanizing of people,” he stated. 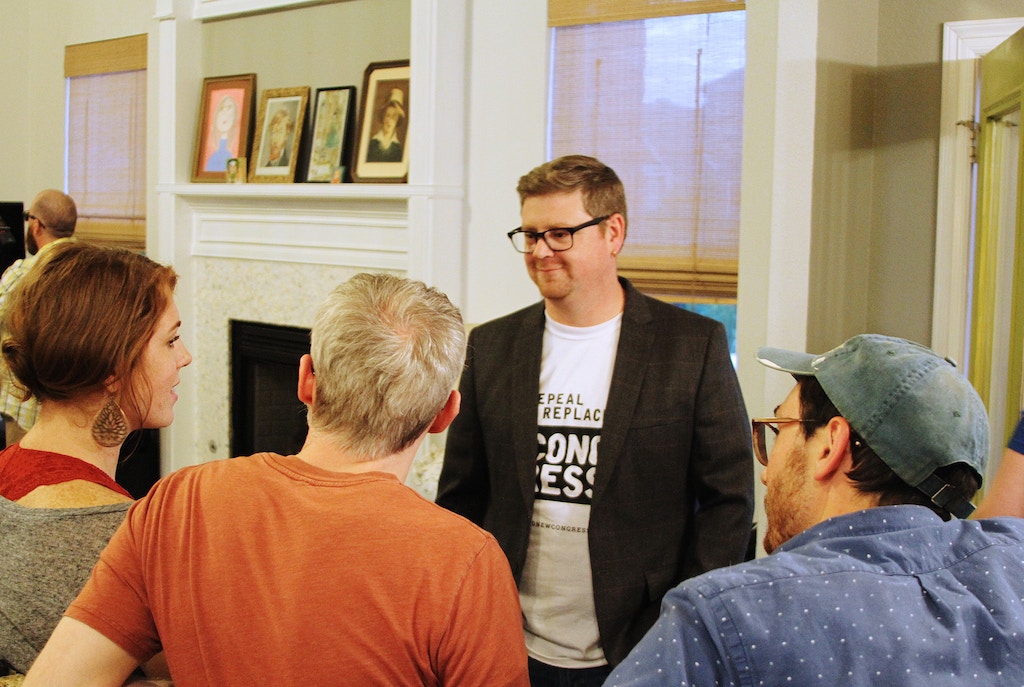 In this undated photo provided by Brand New Congress, Rob Reyerse, who is running in the primary to unseat incumbent GOP Rep. Steve Womack, attends his announcement dinner with friends, congregation members, and community members.

On health care, Ryerse thinks that Republicans have faltered by coalescing around a health care bill with approval ratings barely over 20 percent.

“It would’ve taken just three more independent Republicans in Congress to stop the bill that passed the House a couple of weeks ago. And I would’ve voted against it. I would’ve been one of those independent Republicans that would have voted against that bill,” he explained. “In terms of what we need going forward, I think we need a plan that provides health coverage for all people. I think Obamacare was in some ways a step in the right direction but at the same time it kind of offends my Republican sensibilities to have people being forced to buy insurance to be punished in their taxes if they don’t. I think it’s far better to just have a public option that makes affordable health insurance available to all people. We’ve got to make sure that everybody in the country is covered.”

While it would be hard to find a single Republican in Congress who endorses a public option, it’s actually fairly popular among Republican voters, 51 percent of whom told a Kaiser poll last year that they support offering such a plan to Americans. Part of the reason for this gap between public opinion and public policy is the influence of money in the party, which Ryerse wants to tackle.

“I think the influx of so much money has helped to really cause the toxic nature of our system and has really worked to corrupt the party establishment,” he told us. “I am working with Brand New Congress and we’re not taking special interest money, we’re not taking big PAC money, corporate money. We are being supported, my campaign is being supported, by average citizens who believe and who donate. I think that’s the way it needs to be. I think when we’ve got politicians who are beholden to big corporations and big donors, is what happens is the very thing we have, whether Republicans or Democrats they put party ahead of people and we end up with the mess we’ve got now.”

With freedom from the need to fundraise from the Kochs and the fossil fuel industry, Ryerse also realizes the threat of climate change. “My faith tradition teaches that God has given us this world to enjoy and steward,” he proclaimed. “We need to take action on climate change. We need to make sure we are investing in green energy.”

On social issues, Ryerse sounded notes closer to Republican orthodoxy, describing himself as a supporter of the Second Amendment and gun rights, as well as pro-life. But while many pro-life Republicans have sought to criminalize abortion, Ryerse has a different approach.

“I don’t think that criminalization of abortion has been proven to reduce the number of abortions,” he said, offering alternatives to reduce the number of abortions without punishing those who have them. “We’re actually seeing over the last eight years with an increase in funding for health care and education and fighting poverty we’re seeing abortion levels at their lowest rate that they’ve ever been even before Roe v. Wade so I think that’s the path to be on.”