U.S. Drone Strike in Yemen Killed Men Who Had Nothing to Do With Al Qaeda, According to Relatives

In an interview with The Intercept, a Yemeni man whose relatives were killed in a US drone strike in April says “it was a shock no human can accept.” On the afternoon of April 23, an American drone flying over the remote Al Said area of Yemen’s Shabwah province observed a group of men gathering to eat lunch at a security checkpoint.

Mansoor Allahwal Baras, a former Yemeni Army lieutenant in his late thirties, was chief of the checkpoint, and his younger cousin Nasir, 23, was also stationed there. Khalid, another cousin Nasir’s age, was home on vacation from Malaysia, where he was studying English and aiming for his bachelor’s degree. A car full of five others joined them — local militants, but familiar to the Baras men — and they sent someone else to fetch lunch.

As the drone hovered over them, the men did not panic or flee. For many in the region, the buzzing sound of American drones in the sky has become part of the rhythm of daily life.

But then the drone unleashed its payload of missiles, and in an instant, the impromptu gathering was transformed into a nightmare of heat, smoke, and shrapnel. All eight men were killed.

Mansoor’s nephew, Ammar Salim Farid Alawlaqi, heard the explosion from his home nearby, but he didn’t know who had been killed until a cousin called shortly after to tell him what had happened. By some accounts, a second missile had struck his relatives as they went to aid the others.

“We went to the cemetery and found Mansoor, Khalid, and Nasir, all but pieces of flesh [so] that we were not able to tell their appearances,” Alawlaqi told The Intercept in a phone interview. “It was a shock no human can accept and there’s anger at the U.S. government.”

The day after the strike, a Pentagon spokesperson said that the U.S. had killed “eight Al Qaeda in the Arabian Peninsula terrorists.” Pentagon officials later added that a key AQAP leader, Abu Ahmed Al Awlaqi, had been among those hit. 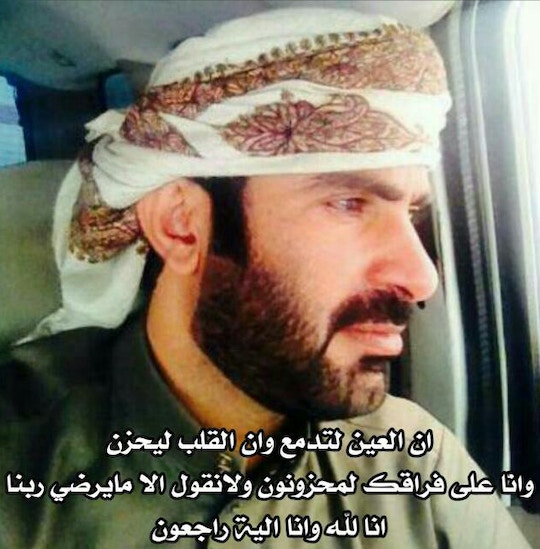 This photo supplied by Ammar Salim Farid Alawlaqi shows Mansoor Allahwal Baras, killed in an April 23 drone strike, with a phrase attributed to the Prophet Muhammad that reads, “The eyes are shedding tears and the heart is in grief, and we will not say except what pleases our Lord. We belong to Allah and to Him we return.”

Alawlaqi, a 27-year-old grocer whose aunt was married to Mansoor, gave his own account of what transpired that day, saying that neither his uncle nor the two young men with him were connected to any militant group. What’s more, Alawlaqi says that the five others killed were not current members of AQAP. The man the Pentagon called an AQAP leader was known to Alawlaqi as Muhammad Awad Barasane. He said that Barwane had been with AQAP and then with the Islamic State’s Yemeni branch, but that he had left both groups.

The strike in Al Said was one of the roughly 250 attacks carried out by the United States in Yemen, a campaign that is now alleged to have killed as many as 1,200 people since 2010, up to 200 of them civilians, according to figures kept by the Bureau of Investigative Journalism. President Trump appears to be outpacing Obama in Yemen, with more than 80 strikes since January and a disastrous Special Forces raid that killed 25 civilians, including 10 children. The Trump administration has also lifted Obama-era rules limiting when strikes can take place for certain parts of Yemen. So far, there have only been a small number of alleged civilian casualties in drone strikes under Trump, but Alawlaqi’s account of who was killed on April 23 raises questions about the people that the military is targeting as terrorist threats.

The Pentagon did not respond to questions about the strike and the alleged civilian casualties. While Alawlaqi’s version of events could not be independently confirmed, it would not be the first time that the United States has misunderstood the social dynamics of the remote Yemeni provinces it is bombing, where perceptions of militant groups are often fluid and have more to do with tribe and family than international terrorism.

Alawlaqi’s relatives didn’t avoid the militants, he said, because they were known as local tribesmen. “To be honest, the five people in the car had past links to [terror groups], but they had quit this movement two years ago,” he said.

“Relationships between people in the community are about tribe and kinship,” he said, “according to their tribal relationships, people tend to invite each other to eat and talk, regardless of political affiliation.”

The sound of a drone overhead also wasn’t a warning sign. “The drones here are hovering 24 hours nonstop, whether day or night. Sometimes they disturb people sleeping with their annoying buzzing noise,” Alawlaqi said. “But it has become so routine for the general public, people don’t check whether it’s hovering above them or not.”

Alawlaqi told The Intercept that even if the militants were “wanted by the Americans, they have no right to target them while among innocent people.”

He believes the strike must have been based on bad intelligence. “When someone is wanted, they need to have enough evidence,” he said.

After the strike, a few local government representatives came to pay respects to the families of those killed. But Alawlaqi has heard nothing from the U.S. government.

Yemen as a whole is caught in the grip of a massive humanitarian crisis. A U.S.-backed Saudi military campaign in the impoverished country has led to massive civilian casualties, as well as food shortages and disease epidemics. Despite growing international outcry over the conflict, no political solution seems to be in sight, as the Saudi-led alliance has repeatedly committed itself to extirpating the Yemeni Houthi rebel movement at all costs. Even in areas like Shabwa, where many Yemenis are fighting the Houthis, when it comes to American counterterrorism operations, there is a sense that civilian populations are being lumped together with terrorists, in order to justify military operations.

“What hurts is that there’s a deliberate stereotyping, categorizing people under these [militant] currents,” Alawlaqi said. “If the population of this area is estimated at 20,000 people, and the militants are no more than 150 people, how can they treat all the population as though they are under the militants’ control?”