A private equity firm run by a close Trump adviser is partnering with Saudi Arabia to privatize U.S. infrastructure. Throughout the presidential campaign, Donald Trump blasted his rival for taking money from Saudi Arabia, which, he regularly charged, has a horrific human rights record and was behind the attack on September 11.

Trump, of course, has never been married to anything he has said in the past. But even by Trumpian standards, a recent series of deals he struck with Saudi Arabia stand out.

The two that made the news — a $110 billion arms deal and a $100 million gift to an Ivanka Trump-inspired endowment — are remarkable in their own right.

But the third, which was rolled out much more quietly, is no less stunning: The Saudi kingdom joined forces with a top outside adviser to Trump to build a $40 billion war chest to privatize U.S. infrastructure.

The vehicle would employ the same kind of public-private partnerships, known as P3s, the Trump administration has endorsed for its trillion dollar infrastructure plan. The deal hands over control of projects to rebuild American roads and bridges to the private sector and a foreign country.

The Saudi Public Investment Fund announced its $20 billion investment with Blackstone, the private equity giant whose CEO, Stephen Schwarzman, chairs the Strategic and Policy Forum, a key group of private-sector advisers to President Trump. In recent months Schwarzman has become a key adviser to the president, speaking to him “several times a week,” according to Politico. Schwarzman, who has an estate near Mar-a-Lago and has known Trump for years, is a Republican megadonor, giving over $4 million to Super PACs that support conservative candidates in the last election cycle.

The Saudi investment was announced when Trump was in Saudi Arabia and was touted by the White House as part of Trump’s commitment to render deals for outside investment in America. Blackstone described the deal as “the culmination of a year’s discussions” and insisted the White House was not involved.

But the managing director of Saudi Arabia’s Public Investment Fund, Yasir Al Rumayyan, explicitly said that the deal “reflects our positive views around the ambitious infrastructure initiatives being undertaken in the United States as announced by President Trump.”

The timing was also notable, coming just after Trump son-in-law and adviser Jared Kushner negotiated a $110 billion arms sale to the Saudis. Kushner and Blackstone have a long history; Blackstone is one of the largest lenders to Kushner’s business, with over $400 million in financing since 2013.

Schwarzman, of course, is not a disinterested adviser to the president. He and his firm stands to gain massively from public policy decisions, whether Trump’s reversal on Chinese currency manipulation (Blackstone is heavily invested in China and even warned investors that labeling China a currency manipulator would harm the company financially) or the administration’s reticence on closing the carried interest loophole (which not only benefits Blackstone but Schwarzman himself). The loophole generates billions of dollars for Blackstone.

“Donald Trump brokering a deal between Saudi royalty and private equity magnates associated with both the Republican and Democratic Party is about as much corruption and self-dealing as can be squeezed into a single sentence,” said Jeff Hauser, director of the Revolving Door Project. “This deal essentially constitutes the singularity of corruption and represents all that is broken with our global politics.” 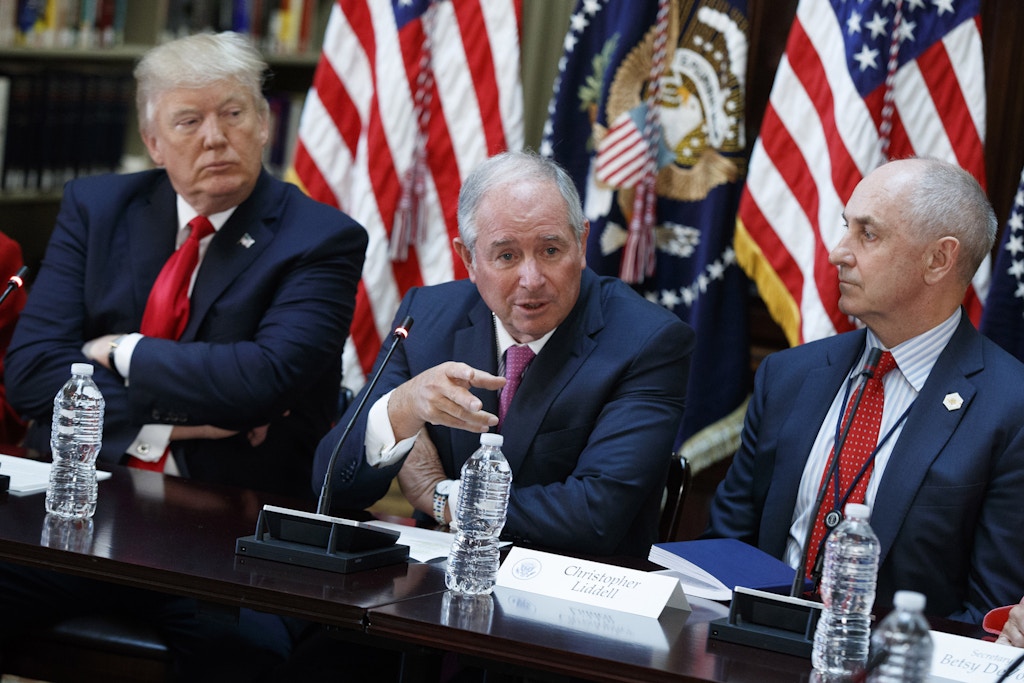 Blackstone Group CEO Stephen Schwarzman, flanked by President Donald Trump and Chris Liddell, the assistant to the president for strategic initiatives, right, speaks during a meeting with business leaders in the Eisenhower Executive Office Building in Washington on April 11, 2017.

This conflict carries over to infrastructure, a business Blackstone has been focused on since last year. They’re looking to capitalize on Trump’s victory, and his long-promised plan to use private money to leverage around $200 billion in public funds over ten years for building projects. The infrastructure plan surprisingly got slipped into Trump’s budget proposal.

“There is broad agreement that the United States urgently needs to invest in its rapidly aging infrastructure,” said Blackstone president Tony James this week. James is a donor to Democratic presidential candidates.

Most Democrats have dismissed Trump’s infrastructure plan as “sleight-of-hand,” because his budget actually cuts transportation spending, more than offsetting the $200 billion investment. The cuts include zeroing out a popular state grant program called TIGER, along with slashes to Amtrak and other transit projects.

In addition to P3s, Trump’s advisers talk of using a model popular in Australia, where proceeds from sales of public assets get funneled into new projects. So under the Trump plan, direct federal investments in infrastructure would be lowered, while private control of projects would ramp up. This benefits Blackstone and Saudi Arabia.

Transportation Secretary Elaine Chao, in a puzzling statement, characterized the Trump budget as not a cut in infrastructure spending, but a “dropoff.”

State and local governments don’t lack private capital for infrastructure; municipal bonds are a $3.7 trillion market. Advocates are concerned that companies like Blackstone want an equity stake in infrastructure that will prove more costly than muni bond funding. P3s could generate high tolls and user fees, as the private sector expects a greater return on investment.

In addition, critics charge that P3s narrow where infrastructure projects happen; replacing water systems for the poor in Flint won’t make back the kind of money that a bridge or toll road connecting an affluent suburb might. P3s more generally have been criticized for limiting democratic control of public assets.

“Why would we take some of the resources we have and hand them away to Wall Street?” asked Donald Cohen of the anti-privatization group In the Public Interest. “And give them control over the asset for 20, 30, 40, 50 years?”

Saudi Arabia put up half of Blackstone total investment in their infrastructure fund. A single investor putting that big a commitment into one private equity fund is atypical, and would essentially have a foreign government profit from fees like toll roads.

When the United Arab Emirates attempted to use the state-owned company Dubai Ports World to buy six U.S. seaports in 2006, it generated significant controversy, stoked by right-wing media figures like Lou Dobbs and Democrats such as Sen. Chuck Schumer of New York, was saw an opportunity to damage then-President Bush. The deal eventually fell apart, as Dubai Ports World sold off its stake. By contrast, the Blackstone-Saudi deal has not registered much comment.

But Saudi Arabia’s money will get funneled through a close Trump adviser in a grab for state and local infrastructure, with the expectation of billions of dollars in profits off the roads, bridges, and transit systems the public uses every day. Blackstone expects to use the $40 billion in the infrastructure fund to leverage the purchase of $100 billion in projects, fully 10 percent of Trump’s total commitment.

James told The New York Times that Blackstone could “establish overnight a leadership position” in infrastructure with the Saudi investment. Blackstone’s stock has surged since the Trump election and went up over 7 percent when the Saudi deal was announced.

Schwarzman, whose most recent birthday party featured trapeze artists, live camels, and Gwen Stefani, was in Riyadh last week for a whirlwind of dealmaking known as the U.S.-Saudi CEO Forum.

The private equity titan is hardly the only financier personally benefiting from an advisory position with the Trump administration. For example, legendary trader Carl Icahn, another adviser, has been using his influence to get the administration to change ethanol rules that would save companies he owns hundreds of millions of dollars. Icahn has also been personally speculating on financial instruments related to his push for changes in ethanol rules.