Trump Injects Himself Into U.K. Election by Lying Again About London’s Popular Mayor

Updated: June 6. Donald Trump made relations with the United States a central issue in the final days of the British election campaign by heckling the mayor of London as he dealt with a terror attack. 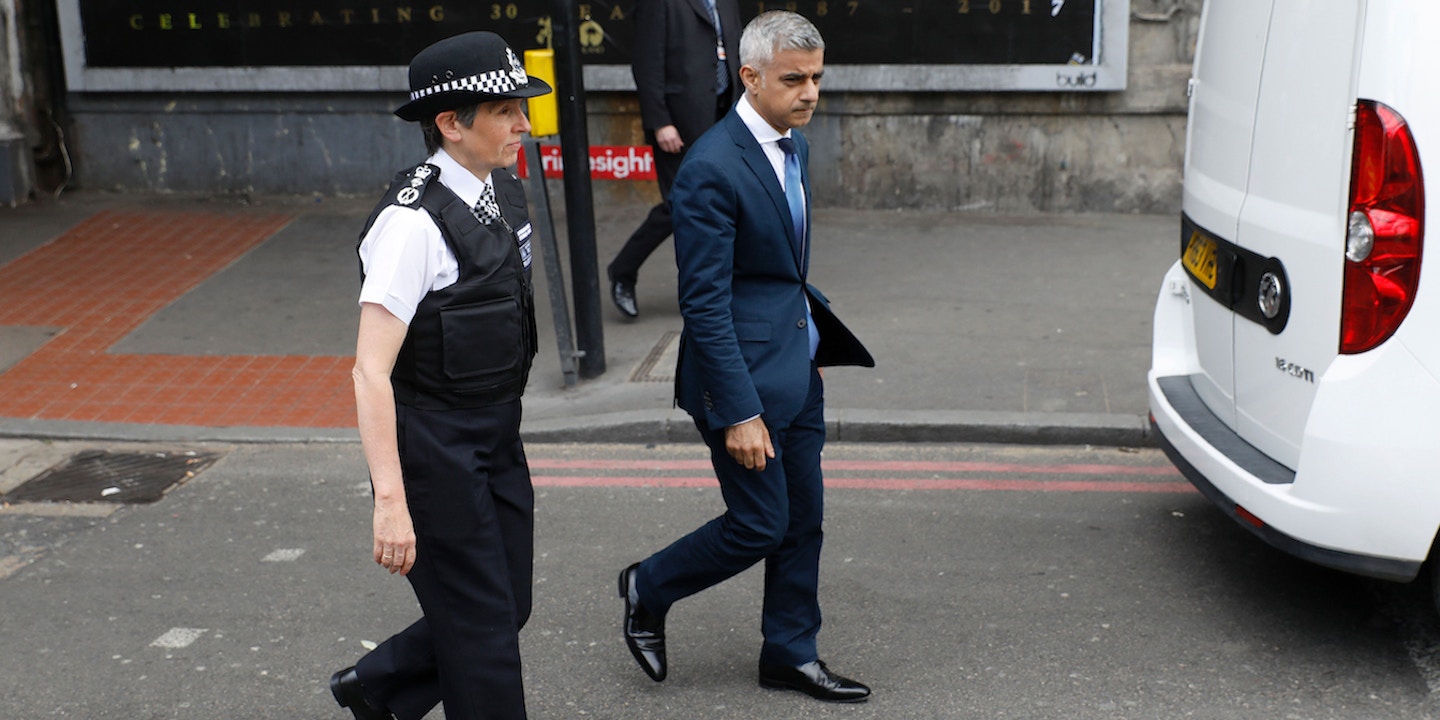 Unconstrained by basic decency, or any sense of the political climate in Britain, the President of the United States, Donald Trump, made his own behavior a central issue in the final days of the British election campaign by once again attacking the mayor of London, Sadiq Khan, in the aftermath of a deadly terror attack on his city.

Trump was roundly criticized in Britain for falsely claiming on Sunday that Khan had said that there was “no reason to be alarmed” by the terror attack on London Bridge. The mayor, as anyone who watched his televised comments knew, had instead tried to instill calm by advising Londoners not to be worried by “an increased police presence” in response to the attack.

Rather than apologize, Trump repeated the smear on Monday — and added a new lie: that the mayor had been forced to think of an “excuse” for the comment he did not, in fact, make.

Pathetic excuse by London Mayor Sadiq Khan who had to think fast on his "no reason to be alarmed" statement. MSM is working hard to sell it!

The leader of the opposition Labour Party, Jeremy Corbyn, defended Khan on Sunday — saying that “the current occupant of the White House has neither the grace nor the sense to grasp” what a good job the mayor was doing at uniting the capital’s many diverse communities — and again on Monday.

Sadiq Khan has spoken for London and our country in standing up to hate. That is how we stop terrorists winning, not by promoting division. https://t.co/qPtJBaPobI

Prime Minister Theresa May smiled nervously on Monday when she was asked to comment on Khan’s handling of the crisis and “whether you have any views on the interventions of foreign world leaders in this issue so soon after an attack.”

Great Q! May avoids criticising Trump over that @SadiqKhan tweet so @alexGspence asks just what he would have to say for her to speak out. pic.twitter.com/yje9FgGvhs

After she said, “I think Sadiq is doing an excellent job,” but dodged the second part of the question, May was pressed three more times to comment on Trump’s attack on the mayor but refused to condemn the American president.

James O’Brien, who hosts a morning radio show in London, suggested that May’s fear of offending Trump likely stemmed from her effort to strike a trade deal with him to offset the impact of Britain’s exit from the European Union.

PM clearly being advised, quite accurately, that Trump is an irrational, petulant bully who will never forgive the mildest criticism.

The calculation is that, however monstrous the conduct, we can't afford to offend him. Hard to imagine that being the case without Brexit. https://t.co/KEevv6uE1M

When a Buzzfeed reporter finally asked, “What would Donald Trump have to say for you to criticize him?” May repeated her praise of Khan — who was elected in a landslide last year and remains broadly popular — and said that she thought Trump had made a mistake by pulling the U.S. out of the Paris climate accord.

On the campaign trail, however, Corbyn — who hopes to replace May as prime minister after the election on Thursday — accused her of demonstrating “subservience to Donald Trump” by refusing to sign a letter from the leaders of France, Germany and Italy condemning his decision on the climate deal.

That rhetoric echoed an analysis of the damage that Brexit had done to Britain’s position in the world offered by Emmanuel Macron, the new French president, earlier this year. Asked about the impact of the Brexit vote during an interview with the magazine Monocle before he was elected, Macron said that it had meant “on the geopolitical level, as well as on the financial, realignment and submission to the U.S.”

“What is going to happen is not ‘taking back control,'” Macron added, “it’s servitude.”

Khan, the city’s first Muslim mayor, initially refused to respond directly to Trump’s taunts, but he did offer a sort of live subtweet, mentioning in an aside on Monday that London’s police force had many pressures, including state visits “some, welcome, some not.” That was a clear reference to Prime Minister Theresa May having extended an invitation to Trump to visit the British capital, with full honors.

Khan’s comment came as he stood at the scene of the attack alongside London’s police chief, Cressida Dick, and lambasted the government for massive cuts to the city’s security budget over the past seven years.

Those cuts, part of a Conservative-led austerity drive that reduced the number of police officers nationwide by 20,000, were overseen by May herself, who was in charge of the police as the country’s home secretary from 2010 to 2016, before she became prime minister.

That’s a fact that Corbyn is putting at the center of his closing argument for why May should be held responsible by the voters.

This Thursday voters have the chance to vote for a Labour government that will invest in police and security services rather than cut them. pic.twitter.com/90AYnzLMNc

As the focus of the campaign’s closing days turned to security in the aftermath of the third terrorist attack in ten weeks, May was peppered with questions on Monday by reporters who wanted to know if she was not, herself, responsible for denying the police the resources they need.

WATCH THIS: Theresa May just got absolutely mauled by the media. Police cuts are the number one story. It's making her very uncomfortable... pic.twitter.com/ddbxu3DHOj

Later on Monday, after leading a tribute to the victims of the attack, the mayor of London repeated his criticism of the Conservative government’s cuts to the city’s budget for policing in an interview with Channel 4 News. Asked to comment on Trump’s tweets, Khan sighed and said, “Well, look, since Saturday I’ve been working with the police, with the emergency services, with the government and others to deal to the horrific attack on Saturday; I just haven’t got the time to respond to tweets from Donald Trump.”

Pressed to say whether he would like Trump’s planned state visit to be called off, Khan said that his position had not changed since he stated his opposition to the visit on the same program in January, when Trump first moved to impose a travel ban on visitors from Muslim-majority nations in the Middle East and North Africa.

"His policies go against everything we stand for." Mayor of London @SadiqKhan criticises @realDonaldTrump's response to the London attack. pic.twitter.com/X4gN4AN2ES

“My position remains the same: I don’t think we should be rolling out the red carpet for the president of the U.S.A. in the circumstances where his policies go against everything we stand for,” Khan said on Monday. “When you’ve got a special relationship, it’s no different to when you’ve got a close mate — you stand with them in times of adversity, but you call them out when they’re they’re wrong, and there are many things about which Donald Trump is wrong.”

As the BBC notes, Trump seems to have been nursing a grudge against Khan for more than a year, since he said on the campaign trail that, should he become president, he would make an exception for London’s mayor to his proposed “total and complete shutdown of Muslims entering the United States.” Khan, who was appalled by the proposed Muslim ban, rejected that idea, calling Trump’s views of Islam “ignorant,” and suggesting that he was “playing into the hands of extremists who say it’s not compatible to be Western and to be a mainstream Muslim.”

Trump then told his friend Piers Morgan he was willing to take an I.Q. test to prove that he was not ignorant (which only seemed to prove that he did not understand the meaning of the word “ignorant.”)

Trump added that he was offended by Khan’s remarks. “I think they’re very rude statements, and frankly, tell him, I will remember those statements,” he said.

Fallout from Trump’s attempt to pick a fight with London’s mayor continued on Tuesday, as Peter Ricketts, who was David Cameron’s national security adviser, told BBC Radio 4 that the American president’s “extraordinary intervention in British affairs at a very sensitive moment in the U.K.” should at least delay any state visit. “To put it diplomatically, it does not actually create the conditions for a successful, celebratory state visit,” Lord Ricketts said, “perhaps the president would conclude that for himself.”