At a Portland alt-right rally, there was evidence that federal Department of Homeland Security police were cooperating with militia members. Fourteen people were arrested at an alt-right rally in Portland, Oregon, last weekend. A man named Todd Kelsay helped with one of the arrests. In videos and photographs posted online, Kelsay can be seen on his knees with a group of police officers, reaching behind one of their backs to retrieve a plastic handcuff to arrest an unidentified black-clad protester. In one video, Kelsay appears to be assisting three officers in cuffing the suspect.

Yet Kelsay stood out. The Department of Homeland Security Federal Protective Service officers he was aiding wore dark blue helmets and flak jackets with “POLICE DHS” patched across the front. Kelsay, on the other hand, sported a desert camouflage helmet and ballistic vest over a black tee shirt and jeans.

The discrepancy in appearance arose because Kelsay is not with the Portland police nor with the federal DHS police whom he was aiding.

Kelsay, who is a member of the American Freedom Keepers, a right-wing militia, was there helping to secure the free speech rally” organized by alt-right activists. (The Freedom Keepers, Kelsay said, did not officially take part in the rally.) In an interview Tuesday, Kelsay told The Intercept that he was instructed by DHS police to assist in the arrest. “I was asked, while I was on the ground, by a police officer, ‘Help me, hand me the handcuffs.’ He was looking at me. So I handed him the cuffs,” Kelsay said. But that wasn’t the only time Kelsay or other alt-righters played cops at the rally. 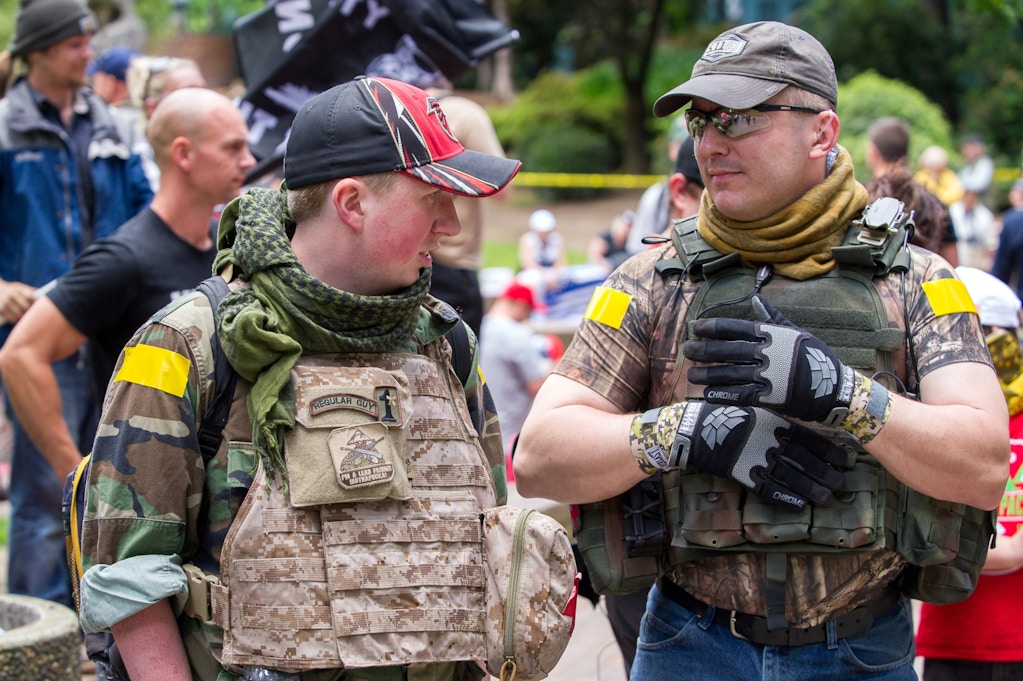 Members of a security detachment attend a pro-Trump Freedom Rally at Terry Schrunk plaza in downtown Portland on June 4, 2017.

With the extremes of the American political spectrum squaring off nearly every week in tense rallies and counter-protests, where violence erupts not infrequently, police are drawing outside aid from only one side: the far-right. That police forces would ask for and accept help from far-right protesters might not be as surprising as it seems: In January, The Intercept revealed that right-wing infiltration of law enforcement had grown so prevalent that the FBI investigated the trend.

The relationship works both ways: Police get help, and alt-right demonstrators are seemingly put above the law in return. The result is that militia members who work security for alt-right events are carrying out policing activities with impunity under the gaze of actual police. At the June 4 Portland rally, eyewitnesses report at least two other instances in which alt-right forces apparently attacked protesters without instigation.

The protester Kelsay helped detain was arrested shortly after another member of the rally’s unofficial security detachment blocked his path as police stood quietly by. A DHS officer suddenly rushed toward the protester who then fled and was nabbed by a third militiaman.

This account of Kelsay’s self-described collaboration with DHS police is drawn from three hours of phone interviews with him, as well as witness accounts, videos, and photographs obtained by The Intercept and posted to social media. Kelsay, 48, repeatedly admitted he assisted DHS police in physically securing the individual. In the videos, the officer can be seen turning toward Kelsay before the militiaman retrieves a zip-tie. By this point there are more than half-a-dozen DHS officers securing the arrest, but none appear to ask Kelsay to leave or stop handling the suspect.

The Portland rally had been organized by alt-right leader Joey Gibson, and attended by hundreds of supporters of President Donald Trump. Thousands of counter-protesters, including immigrant, religious, labor, and left groups opposed to the event, which came as Portlanders were still reeling from the May 26 murder of two men, allegedly by a white supremacist named Jeremy Christian (Christian attended a Gibson-sponsored event in Portland in late April).

DHS police were on hand because Terry Schrunk Plaza, the site of the rally, is federal property, including the sidewalk out front. A spokesperson for DHS Federal Protective Service said 40 officers from the FPS were “on the ground to secure the safety and security of everyone in and around federal facilities.” (DHS did not respond to a detailed inquiry about alleged cooperation between militia members and DHS police.) Antifascist demonstrators confront police during a protest on June 4, 2017 in Portland, Ore.

The DHS police looked on as Kelsay and the unidentified protester he would later arrest began arguing — “aggressive,” was how Kelsay described him. A three-minute video shows the two having a civil dispute. “You’re being asked to leave,” Kelsay said at one point, extending his arm. While Kelsay and the youth talk, a Portland officer and a DHS officer observe but do not question Kelsay’s actions. The young protester in black shuffles in the other direction and is blocked by another member of the rally security team, identifiable by the uniform of military-style clothing and yellow tape. With more police looking on, DHS officer charged the young protester in black, for reasons that remain unclear, and the chase began.

“They were yelling, ‘Stop, stop him,’” Kelsay recalled. He fell behind but kept up his chase: “So if the police needed the assistance I could give it.”

Tusitala “Tiny” Toese, a member of a different militia, was finally the one who stopped the protester. “I picked him up and slammed him into the ground,” Toese told The Intercept. “I was trying to help law enforcement.” As officers swarmed the scene, a fourth video appears to show Kelsay applying the zip-tie cuffs. Kelsay said the officer “put the cuffs on but I still had a hold of the tail of the cuff. He said, ‘Tighten them up.’ I don’t know if he was talking to me, but I had a hold of them, so I tightened them up. Then I helped them pick him up. I didn’t want him to get hurt.”

A photo snapped seconds later by an Oregon Public Broadcasting reporter shows a mix of militiamen and police. “Officers thank Trump Free Speech Rally hired security for their help taking down a fleeing protester,” Bryan M. Vance, the reporter, tweeted along with the picture.

Kelsay had been boasting of his relationship with the police earlier in the day. “‘All I have to do is snap my fingers and the cops will arrest you,’” Jonathan Shields, a counter-protester, recalled Kelsay saying in an encounter before the arrests (Kelsay denied making the remark). “He was granted authority to keep the sidewalk clear by the police,” Shields added.

Kelsay claims he was simply following orders from the police. “We did what they told us to — crowd control,” Kelsay said. “We were supposed to keep the counter-protesters out. We were permitted to exclude people if we saw they were a possible danger.”

But local police claim steps were taken to avoid protest attendees and unofficial security engaged in law enforcement activities. Sgt. Pete Simpson of the Portland Police Bureau said, “There was a conversation between the organizers of the event, the FPS and PPB that they were not to interfere in any arrests, particularly anyone acting as private security.”

Simpson, however, stopped short of expressing any grave alarm that the arrangement wasn’t honored. “Private citizens conducting policing functions is concerning if they are not being asked to help,” he said. Then Simpson turned his attention to mostly unconfirmed allegations made about left-wing counter-protesters: “I am more concerned about bricks, bloody tampons, and urine-filled balloons being thrown at our officers.” (The ACLU of Oregon criticized the police response to protesters.) 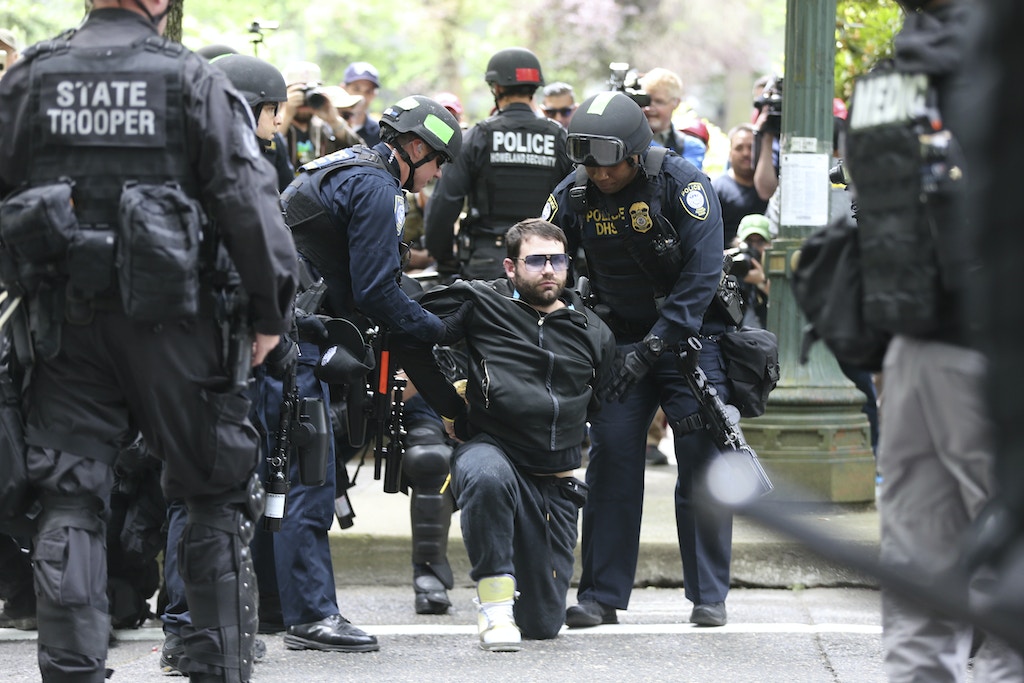 A protester is detained by Portland police during a demonstration in Portland, Sunday, June 4, 2017.

Eyewitnesses claim there were two other instances in which police ignored alt-righters running rampant. One counter-protester, Andrew Riley, said he saw an incident in the DHS-controlled area where a person in dark clothing, who was yelling, was “picked up by someone wearing camo clothing with the yellow stripes and a ballistic vest and body slammed to the ground.” He said, “Within five seconds at least three cops moved in and immediately knelt on the person,” and as they cuffed the person the militia man “was kneeling on the protester alongside police.”

In a third case, Nate Gowdy, a photojournalist, claimed he and other counter-protesters were attacked by pro-Trump demonstrators while DHS police watched passively. Eyewitness accounts, photos, and a recollection on Facebook paint a picture of alt-righters with helmets and battle gear make an unprovoked attack with pepper spray and a flagpole. Close to 10 DHS police stood nearby and only intervened to let the suspected alt-right attackers to leave the scene. (A video shows a crowd looking on as the obscured fracas unfolds.)

Alex Vitale, author of “The End of Policing” and professor of sociology at Brooklyn College, who reviewed footage of the arrest involving Kelsay, said the incident raises troubling questions. “It seems almost gratuitous, like this guy wants to get in on the action. A professional police force would not allow that.”

“Given the history of corrupt cooperation between right-wing forces and political police units like riot cops, anti-terror, and intelligence, we should always be alarmed between growing cooperation between alt-right forces and police forces,” Vitale said. “It does raise the question of what type of relationships are there, what information is being shared, and what type of planning went into this between the alt-right forces and the police handling the demonstration.”