Testimonies gathered by The Intercept add to a mounting pile of evidence countering the U.S. narrative about a deadly attack in March. 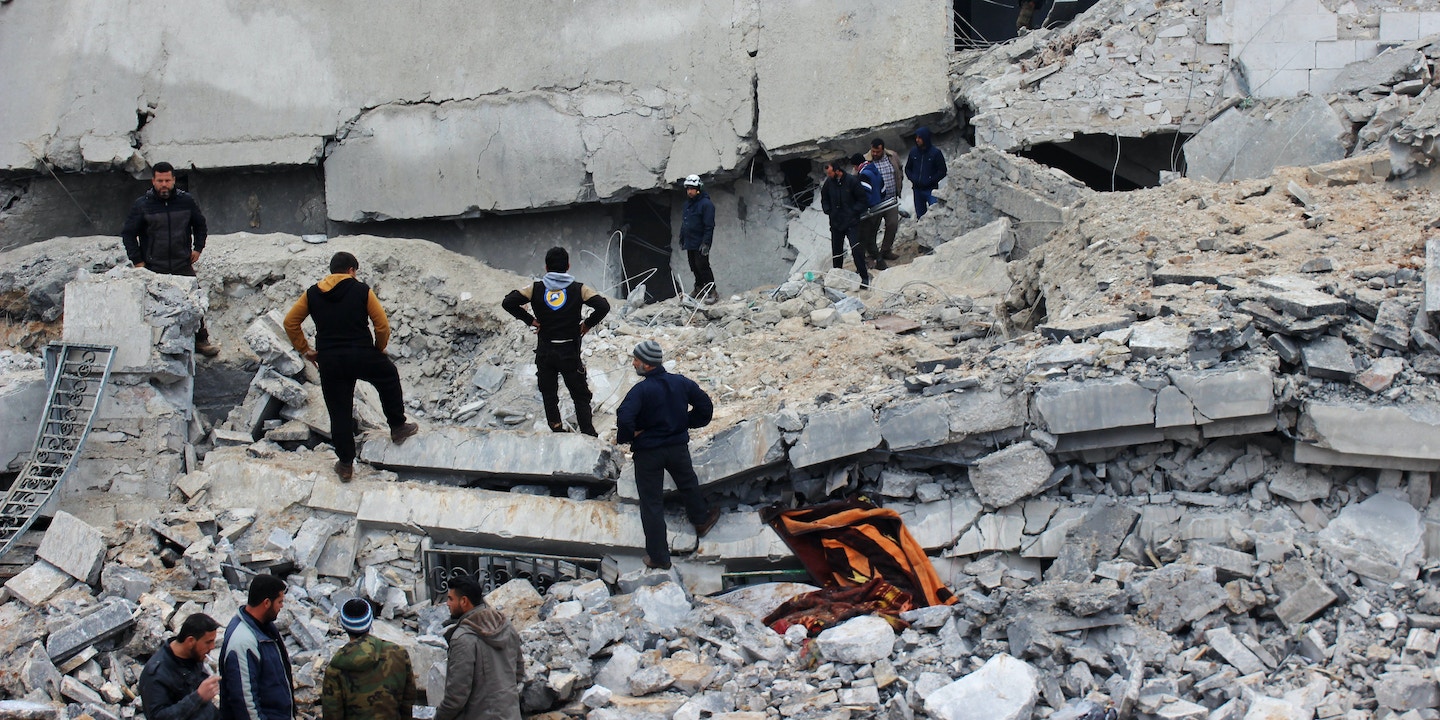 Earlier this month, the Pentagon announced the results of an internal review into a U.S. drone attack on a mosque in a village in Syria. There had been allegations that at least 38 people, all of them civilians, had been killed in the March 16 attack, but the Pentagon review upheld the Defense Department’s initial statement that it had targeted an Al Qaeda meeting. Only one person — “small in stature” — may have been a child who was killed, the review found. The strike was “legal.”

Yet by its own admission, the U.S. military did not interview any locals who had actually been at the site of the attack, nor did any U.S. personnel visit the bombing site.

A number of first responders, medical staff, and other witnesses to the strike who spoke to The Intercept maintain that dozens of civilians were killed in the attack, which they said hit a village mosque packed with locals attending an evening service. Describing scenes of carnage that killed both ordinary worshippers and speakers who had come to deliver a lecture, their testimonies directly contradict the U.S. military claim to have hit a gathering of terrorists.

“The targeted guys who the Americans said were linked to Al Qaeda were civilians and had no connections with military organizations. Some of them were religious teachers,” said Jamil Ahmad, a member of the Syrian Civil Defense brigade in the province, who was nearby when the strike occurred. “The first missile targeted the teachers inside the mosque. When the people panicked and tried to run, the planes launched a second missile and killed many civilians.”

The accounts collected by The Intercept add to a pile of evidence countering the official U.S. narrative around the strike. A Human Rights Watch investigation published in April raised the possibility that U.S. officers may have committed a war crime by being “criminally reckless in authorizing the attack.”

According to the eyewitness accounts, in the early evening of March 16, several hundred people gathered at a mosque in the village of al-Jina, located in Syria’s Aleppo Governorate, for the nightly prayer service. As worshippers filed into the Omar Ibn al-Khatab mosque, the sound of an aircraft buzzing overhead could be heard.

Around 7 p.m., as worshippers prepared for the service, a salvo of Hellfire missiles slammed into the mosque. Explosions from the strike collapsed part of the building, trapping people under the rubble, while others ran in terror from the site. As screams emanated from the wreckage, people trying to escape were hit by a second round of missiles. According to a later Defense Department statement describing the attack, two drones flying overhead had fired “roughly [the] entirety of their Hellfire payload” at the site, “followed up [with a] 500-pound bomb.”

Following the attack, dozens of victims were rushed to local clinics, which were quickly overwhelmed by the scale of the casualties and had to redirect some of the wounded to other hospitals. Ali Monir, a nurse at a local clinic in al-Jina that took in victims of the airstrike.

“We were not ready to deal with huge numbers of casualties and we had never before dealt with such a situation,” said Ali Monir, a nurse at one of the clinics that helped treat victims of the strike. “Al-Jina is a small town and we only had one ambulance, although some hospitals [in other parts of Aleppo Governorate] sent us ambulances to help. It was a mess: There were bodies on the ground, people screaming, and families rushing into the center to find out if anybody had seen their sons.”

Many on the scene initially assumed that the attack had been carried out by Russian or Syrian government aircraft, until rescuers found munitions fragments bearing U.S. markings. Bellingcat later compiled pictures of the fragments and sourced them to several U.S. arms manufacturers.

Rafat Muhammad, a 24-year-old man who was among those injured in the strike, said that he witnessed the second round of missiles that hit people trying to flee.

“After I finished the [sunset] prayers at the mosque, I headed to the teaching department in the building and spent some time with the guys there. I heard the first explosion hit and saw the people from the mosque panicking and heading to the door to run for their lives,” Muhammad said. “The second missile targeted the door and that’s how a lot of the people were killed. The stones and rubble were dropping on us, my left leg was broken, and I was trapped with the people I heard screaming under the rubble.”

Rafat remained trapped with his leg pinned in the wreckage for hours, until members of the Syrian Civil Defense were able to extract him. Many others were less lucky that day. A list of 28 people killed in the attack published by the Syrian Civil Defense included the imam of the mosque and his wife, who was in a family apartment connected to the building at the time of the airstrike. The list also named at least five children. Roughly 10 more bodies rescuers pulled from the attack site were said to be unidentifiable.

Locals say that the dead included guest speakers from Tablighi Jamaat, a nonviolent global religious proselytizing group that had been visiting the area and holding services for village residents. Ahmad al-Sheikh, a resident of al-Jina, lost his brother Moustafa, who had stayed late at the mosque to listen to a sermon from the Tablighi Jamaat speakers.

“My brother Moustafa went to the mosque to do the prayers, and after that he went to the teaching department of the mosque and spent some time there listening,” Ahmad said. “Moustafa was killed at the door [when the second missile struck] and my two other brothers were trapped under the rubble. One of them was injured in the head we spent 10 hours pulling him out.”

“A few days ago while I was praying, I remembered Moustafa and the way we lost him,” Ahmad added. “The tragedy could not be put into words.” Members of the Syrian Civil Defense dig through the rubble of a mosque on March 17, 2017, following a U.S. airstrike in the village of al-Jina.

The Pentagon claimed responsibility for the strike but initially denied that any mosque had been hit. Instead, U.S. officials said that “dozens of core Al Qaeda leaders” had been killed in the attack, including several “high-value individuals.” U.S. military officials later conceded that the building hit was part of a “mosque complex,” though they continued to deny civilian casualties. In the face of ongoing public scrutiny, the military promised to conduct its own investigation.

A statement from the Department of Defense to The Intercept this week said the investigation into the strike is closed, though the military remains willing to consider new information about the strike. “We considered media reports that indicated a large number of civilians were killed, but our investigation did not uncover evidence to support those claims,” the statement said. “We are confident this was a meeting of Al Qaeda members and leaders. Regrettably, it is possible that there was one civilian casualty.”

The U.S. military has come under increasing criticism for the handling of its aerial campaigns in Iraq and Syria. Last week, a United Nations official said there had been a “staggering loss of civilian life” from airstrikes conducted by the U.S.-led coalition in recent months, as strikes began to hit major cities like Raqqa and Mosul. While an increase of civilian deaths was widely expected at this stage of the campaign, a recent New York Times piece by Council on Foreign Relations fellow Micah Zenko highlighted what appeared to be a systematic effort to loosen targeting practices and reduce public accountability for strikes that killed civilians.

“[Even] as the civilian death toll ticks upward, the American military has relaxed oversight, investigation, and accountability on civilian casualties,” Zenko wrote. He added that “if the military were concerned about civilian deaths, more investigators with training and experience in targeting would be assigned” to investigate casualty incidents.

The inquiry into the al-Jina bombing in particular does not satisfy Ole Solvang, deputy emergencies director at Human Rights Watch and one of the authors of the organization’s report on the strike.

Solvang told The Intercept that the United States is attempting to “sweep this under the carpet” by quietly exonerating itself of wrongdoing without providing a full account of what transpired.

“From our point of view, it’s really hard to understand how the U.S. authorities can be so confident about who was or wasn’t killed when they haven’t even spoken to anyone who was there at the time,” Solvang said. “We are absolutely confident that there were many civilians present at the mosque and that many civilians were killed. Even if the U.S. claims that an Al Qaeda leader was also in attendance, we need to understand what kinds of steps were taken to mitigate harm to civilians before the strike was authorized. This investigation should not be considered over.”

Top photo: Syrian Civil Defense members and civilians try to rescue victims trapped in the debris of a mosque following a March 16 U.S. airstrike in the village of al-Jina, Syria, on March 17, 2017.