How Donald Trump Could Destroy the Global Fight Against Kleptocracy

The U.S. played a key part in putting the son of an African dictator on trial in Paris for corruption. Under Trump, that role is likely to end. An incredible event is taking place in Paris. The playboy son of a wealthy dictator is on trial for stealing more than $100 million from his oil-rich and poverty-plagued homeland.

Authorities in Europe have already seized a glitzy assortment of the allegedly ill-gotten possessions of Teodorin Obiang, whose father is nearing four decades of dictatorial rule in Equatorial Guinea. Gone is Obiang’s 250-foot yacht with a helipad and jacuzzi, as well as nine of his luxury cars (two Bugattis, two Bentleys, a Ferrari, Rolls Royce, Maserati, Porsche Carrerra, and Mercedes Maybach), 300 bottles of Chateau Petrus (at more than $2,500 a bottle, one of the world’s most expensive wines), an art collection that includes works by Degas and Rodin, and his 101-room mansion on Avenue Foch in Paris.

Two dynamics make this trial remarkable. The first is that, while it is not unusual for ousted kleptocrats and their children to face trial for corruption, it is nearly unprecedented for a ruling family to be hauled before a court. Teodorin Obiang currently bears the title of vice president of Equatorial Guinea, and his father, Teodoro, is the unloved president who, in the six times he has organized facsimiles of elections since taking power in a 1979 coup, never received less than 93 percent of the votes. The trial came about due to an unusual facet of French law: Civic groups can file criminal complaints against foreign officials. Prosecutors were all but forced to take the case.

Another layer of remarkableness — this one the opposite of encouraging — is that we might not see another spectacle of this sort for a long time. That’s because the Trump family, which has shown a limited regard for separating politics from business, has fully installed itself and its ethics in the White House. The consequences reach beyond American shores. A foundation for the trial in France was laid many years ago in the United States by activist organizations, congressional investigators, and, later on, federal law enforcement. In 2011 Barack Obama’s Department of Justice filed its own civil charges against Teodorin Obiang under its Kleptocracy Asset Recovery Initiative, and Obiang settled that case by forfeiting his $30 million Malibu mansion, a Ferrari, and several items of Michael Jackson memorabilia. 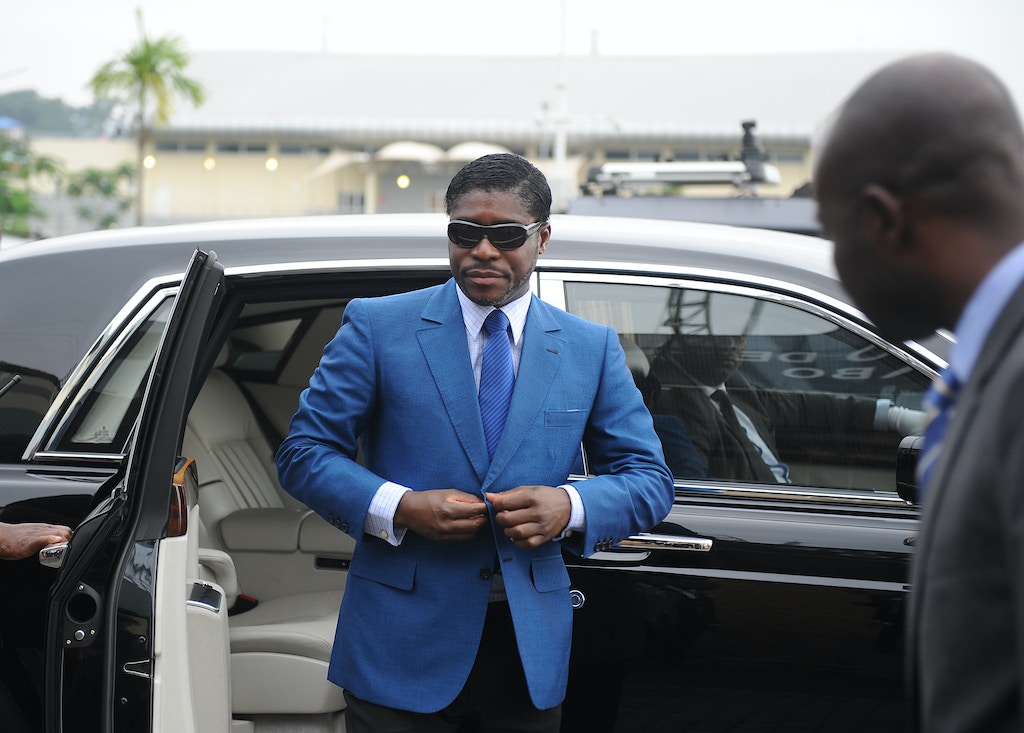 Teodorin Obiang, the son of Equatorial Guinea’s president, arrives at Malabo stadium for ceremonies to celebrate his 41st birthday on June 24, 2013.

But what are the odds that President Donald Trump and his family will criticize, let alone prosecute, a style of rule they emulate? What standing does the United States have to argue against nepotism and kleptocracy when its own government has the aroma of both?

Last week, the pre-eminent anti-corruption group Global Witness issued a remarkably blunt statement that zeroed in on the Trump problem. “The importance of continuing this fight against kleptocracy around the world cannot be overstated,” said Zorka Milin, a senior legal adviser to Global Witness.  She went on:

America has long played a leading role in this global fight, but the future of that leadership is now coming into question, as the Trump administration disengages from a number of important international initiatives and works with Congress to dismantle critical transparency and public interest regulations at an unprecedented pace. Moreover, the moral authority of the U.S. to lead this fight is also in question, as President Trump continues to be plagued by allegations of violating an anti-corruption provision of the U.S. Constitution through his business dealings with foreign governments.

Kleptocracy has many forms. The most common is an ethics-challenged family holding key positions in a nation’s leadership, exercising their power and influence in ways that enhance their business interests. Trump and his family members, especially his daughter Ivanka and son-in-law Jared Kushner, who have offices in the West Wing, have been criticized for nurturing their business activities while possessing public power. The president spends his leisure days at Trump-branded properties and is being sued for violating the Constitution’s emoluments clause, which prohibits U.S. officials from receiving payments from foreign governments. There are regular reminders of the apparent shadiness of the family’s business habits: Ivanka Trump faces a deposition for stealing a shoe design; her father recently paid $25 million to settle a lawsuit over the fraudulent Trump University; and Kushner’s family-controlled real estate company had to back out of an unethical tax loophole it had tried to exploit in New Jersey.

The Trump family has inadvertently shed light on the naked schizophrenia behind the United States position on kleptocracy. While offering perpetual lip service to the perils of ruling families that insinuate themselves into power and become all the richer for it, successive Republican and Democratic administrations have nonetheless supported kleptocracies that are geopolitically useful to support. An example is Saudi Arabia, a close U.S. ally that has the world’s largest oil reserves and is ruled by a monarchy with vast private wealth and an abysmal human rights record.

On occasion the U.S. does the right thing, or tries to balance a lot of the wrong thing with a bit of the right — and Equatorial Guinea is a perfect example. The Obiang regime has friendly relations with the U.S. government despite the Justice Department’s corruption case against Teodorin. Moreover, the companies — ExxonMobil and Marathon Oil — that extract Equatoguinean oil and gas, enriching the Obiang regime, are American.

Yet, for what seems to be the first time in recent memory, the president of the United States is officially hostile to the modest efforts that have been taken to crack down on global corruption. In an interview on CNBC, Trump called the Foreign Corrupt Practices Act a “horrible law” because it prevents U.S. companies from making secret payments to foreign officials. “It puts us at a huge disadvantage,” Trump told the business network in 2012. On this, he is a man of his word: His administration appears to have begun withdrawing the U.S. from a key global effort to thwart corruption, known as the Extractive Industries Transparency Initiative. And it’s not just a matter of the Trump administration adopting a critical stance on EITI and the FCPA. An investigation by the New Yorker earlier this year raised the prospect that Trump himself, through his Trump Organization, violated the FCPA in a hotel deal in Baku, Azerbaijan.

The well-being of ordinary Americans might not be greatly harmed by the Trump family trying to use its political power to raise the occupancy rates at its hotels and golf resorts, but kleptocracy has real impacts in other countries. Equatorial Guinea’s population is about a million and most of them live in poverty despite the country’s oil revenues (I saw this poverty firsthand when I reported from the country a number of years ago, until I was expelled for being a spy). As the Washington Post noted, the value of Teodorin Obiang’s multiple yachts is $250 million, about twice his country’s budget for education in recent years. His now-seized mansion in Paris is valued at $200 million — two times the government’s spending on health care. That’s just the son’s personal wealth. President Obiang, according to a congressional investigation more than a decade ago, personally controlled bank accounts in the United States worth between $300 million and $500 million; his wealth has been estimated at $600 million.

Teodorin Obiang has not attended the court proceedings in Paris. Even if he is convicted and receives the maximum sentence, which is 10 years in prison, the victory will be limited. Obiang has claimed diplomatic immunity and is steering clear of the territorial reach of French authorities. Equatorial Guinea’s government — where Teodorin Obiang is, again, second-in-command — is not exactly being shunned, either. Earlier this month, it signed a new oil contract with ExxonMobil.

Top photo: President Donald Trump and first lady Melania Trump, followed by Jared Kushner and Ivanka Trump, make their way to board Air Force One before departing from Ben Gurion International Airport in Tel Aviv on May 23, 2017.