The bodies are typically found by accident. A decaying corpse drying out in the Texas sun, stumbled upon by a hunter or ranch hand. A call might be placed to the sheriff’s office or the remains might be loaded into the back of a pickup truck. Often, they will be delivered to a rural cemetery where paperwork may or may not be filled out before they are lowered into a hole in some unclaimed corner of the graveyard. Sometimes, a tin marker bearing words such as “unidentified male” or “unidentified female” will be left to signal the deceased’s final resting place, but often not. And so it has been for years in Brooks County, an expanse of sprawling ranches some 75 miles north of the U.S.-Mexico border, where more than 550 dead migrants have been found since 2009, marking the highest total for any county in the state. From left, Texas State University students Shelby Garza, Audrey Schaefer, and Kari Helgeson remove an unidentified victim’s remains from a grave in Falfurrias, Texas, on Jan. 5, 2017, as part of Operation Identification, an initiative to identify and repatriate the remains of migrants recovered along the U.S.-Mexico border.

Robert Shults, a photographer based in Austin, Texas, did not set out to document his state’s crisis of unclaimed dead, at least not directly. Shults’s professional area of interest is science and scientists at work; it’s what first brought him to the Forensic Anthropology Center at Texas State in the winter of 2015 and kept him coming back in the year that followed. Shults’s idea was to assume the role of a “participant observer,” visiting with graduate students each day, sitting in on their classes, accompanying them as they gathered donations for their program, and watching as they learned to untangle complex forensics cases, all the while snapping photos. 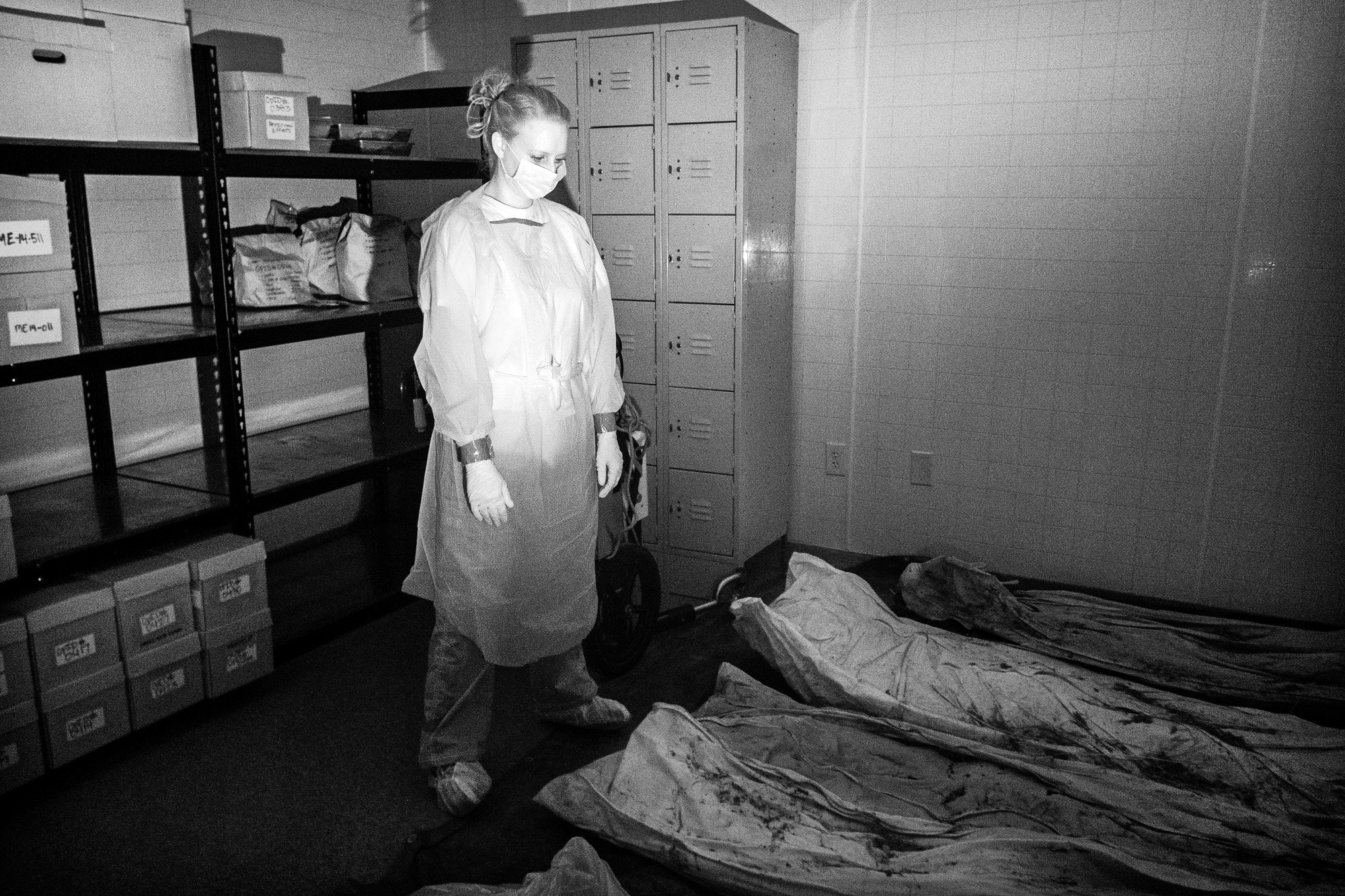 The star of Texas State’s forensic anthropology program, where Shults spent much of his year, is a 26-acre outdoor laboratory that allows students to study donated human bodies in various stages of decomposition. Only a handful of such facilities exist in the world and the lab here is the largest. Officially known as the Forensic Anthropology Research Facility, it is sometimes referred to simply as the “body farm.” Predictably, the decomposition lab, with its ready-made imagery, has received extensive coverage in the press since its 2008 opening. “It’s the thing that gets most of the attention,” Shults told The Intercept. Unfortunately, he added, those accounts have often rung hollow. “One of the things that gets missed is the mission, is the reason why,” Shults said. “Why does this university take donors’ bodies, set them outside, and watch them decompose?” Clothing and personal effects recovered with the remains of unidentified suspected migrants dry on the floor of Texas State University’s Osteological Research and Processing Laboratory in San Marcos, Texas, Jan. 14, 2016. These items will be catalogued and investigated as part of Operation Identification.

Camera in hand, Shults set out to examine those questions, ultimately finding the answers he was searching for in another component of the university’s forensic anthropology program, an initiative known as Operation Identification. The program began in 2013 amid a swirl of grassroots organizing and the exhumation of more than 50 unidentified human remains from a rural graveyard named Sacred Heart. Discovered by a team of student researchers and anthropologists from Baylor University and the University of Indianapolis, many of the bodies pulled from the ground at Sacred Heart had been buried together, five at a time. Some were found in coffins, others were not. One migrant’s remains were buried in a milk crate. 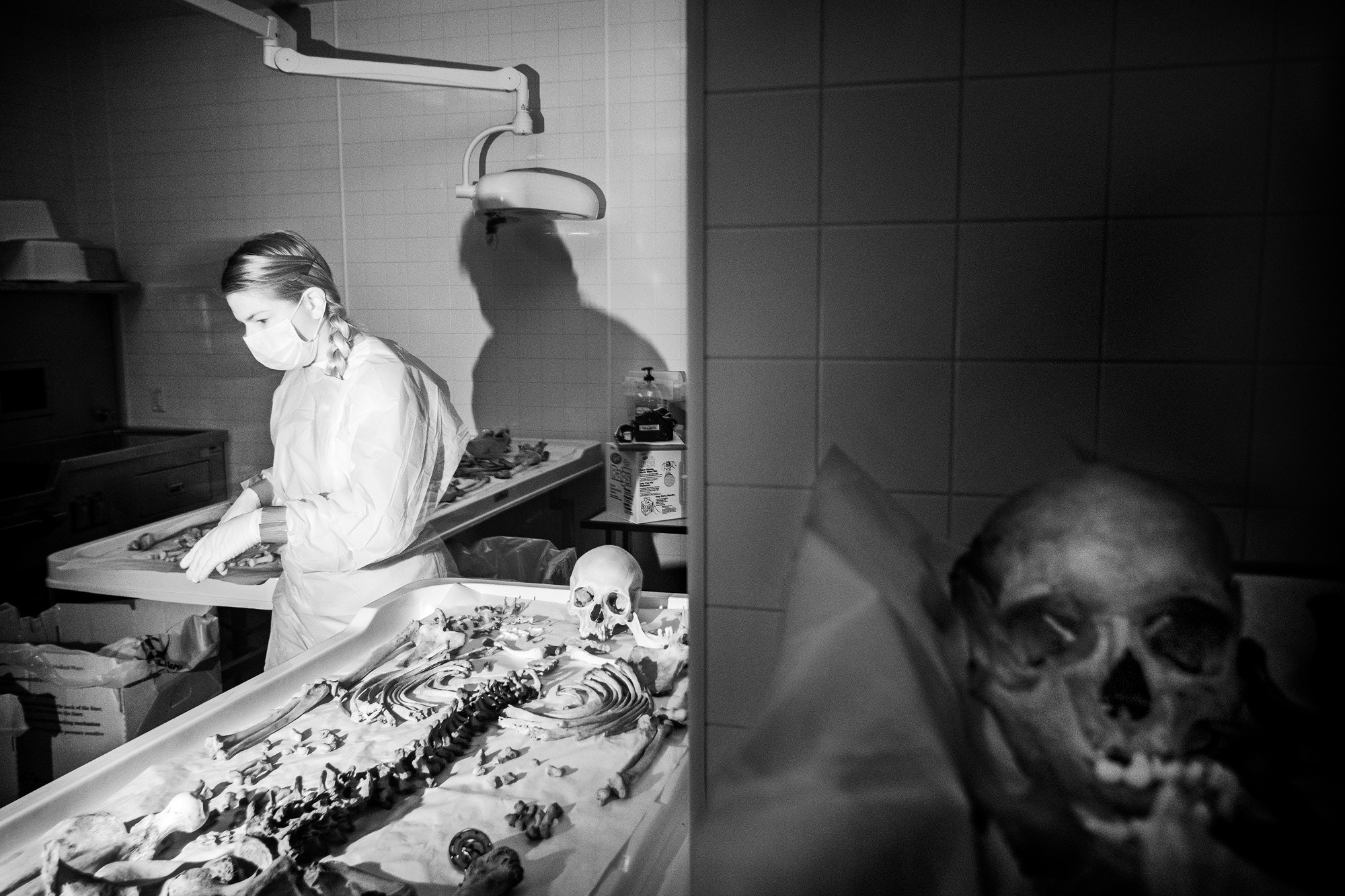 In the years after researchers first broke ground, exhumations of Sacred Heart have yielded nearly 200 sets of unidentified remains. Since that time, Dr. Kate Spradley, a professor at Texas State and founder of OpID, along with her colleagues and students, has made it her mission to push back against the institutional shortcomings across south Texas exemplified by the Sacred Heart exhumations. Adopting a “biocultural approach” that fuses “osteological, dental, isotopic, genetic, and histological analyses,” OpID builds biological profiles of unidentified remains in hopes of reuniting the dead with their families. Much of the work focuses specifically on the “long-term dead,” those buried years ago with little to no attempts at identification or record-keeping. The most difficult part of the job, Spradley told The Intercept, is simply finding the bodies. “That is the hardest part, figuring out where they’re buried,” she said. “It’s all memory recall. It’s going into the community and asking the people who were there at the funeral home that picked up the bodies, the people who worked for the county that dug the burials — ‘Do you remember where these burials were?’”

Graduate student Nandar Yukyi examines an unidentified victim’s skeleton as part of Operation Identification in San Marcos, Texas, Nov. 11, 2015. Flowers from a nearby tree have fallen on a donor’s body at Texas State University’s Forensic Anthropology Research Facility in San Marcos, Texas, Jan. 6, 2016. Donors to Texas State’s Forensic Anthropology Center make a whole body contribution. After decomposition is completed in the outdoor laboratory, the donor’s skeleton will be held in perpetuity at the center, where it will contribute to osteological research and education. This image has been digitally altered to preserve the donor’s confidentiality.

“Even if they write down, ‘Oh, they’re buried in the cemetery,’ they don’t know where in the cemetery and the temporary markers will fail after six months,” Spradley explained. “So it really takes a lot of work. We just went to Rio Grande City to perform exhumations there and it took almost two years of work to figure out where the 13 individuals were that we exhumed.”

Since its founding, OpID has completed roughly 120 biological profiles, identified 26 sets of remains, and repatriated approximately 12 people to their home countries. The numbers are a reflection of painstaking work but only hint at the scale of the unexamined deaths on the border. Over the last decade and a half, Border Patrol agents have documented more than 6,000 migrant deaths in Arizona, California, New Mexico, and Texas. As the New York Times noted in January, that means “more people have died illegally crossing the southwestern border of the United States in the last 16 years than were killed in the Sept. 11, 2001, terrorist attacks and Hurricane Katrina combined.” In Brooks County alone, Sheriff Urbino “Benny” Martinez has estimated that for every body found in his area, there are five that are not. “The short answer is we will never know,” Spradley said of the true toll, adding that all available evidence indicates current Border Patrol tallies are a “gross underestimation” of the scope of the problem. For Shults, embedding with OpID brought the work of Texas State’s famous decomposition lab, and his representations of it, full circle — educational opportunities provided in the decomposition lab make the critical work of OpID that much better. “OpID became this really important part of where it feels like this is the why,” he explained. “To give victims their names back, to speak for them when they can’t speak any longer, and hopefully send them back to their families with some dignity restored.”

Shults, who describes himself as a “well-informed Texan,” said that while he follows the immigration debate in his state, stepping into OpID’s world gave him new insight. He recalls joining student researchers on a trip to a south Texas cemetery last winter, where an exhumation of six grave sites uncovered more than two dozen unidentified bodies. In another example of how little attention is paid to remains found in the desert, Shults described an incident in which researchers exhumed a marked grave said to belong to an “unidentified individual” only to find it contained a body bag with no human remains. “That body bag in that grave that had been marked there in that cemetery for years didn’t even have a single human bone in it,” Shults said. “Essentially what had happened, investigators figure out, was a rancher found a pile of bones and a piece of clothing nearby, assumed it was person, brought it to the sheriff’s department, sheriff’s department said, ‘Oh, unidentified person,’ buried it, but so little investigation was done that no one even noticed that it was a deer.” 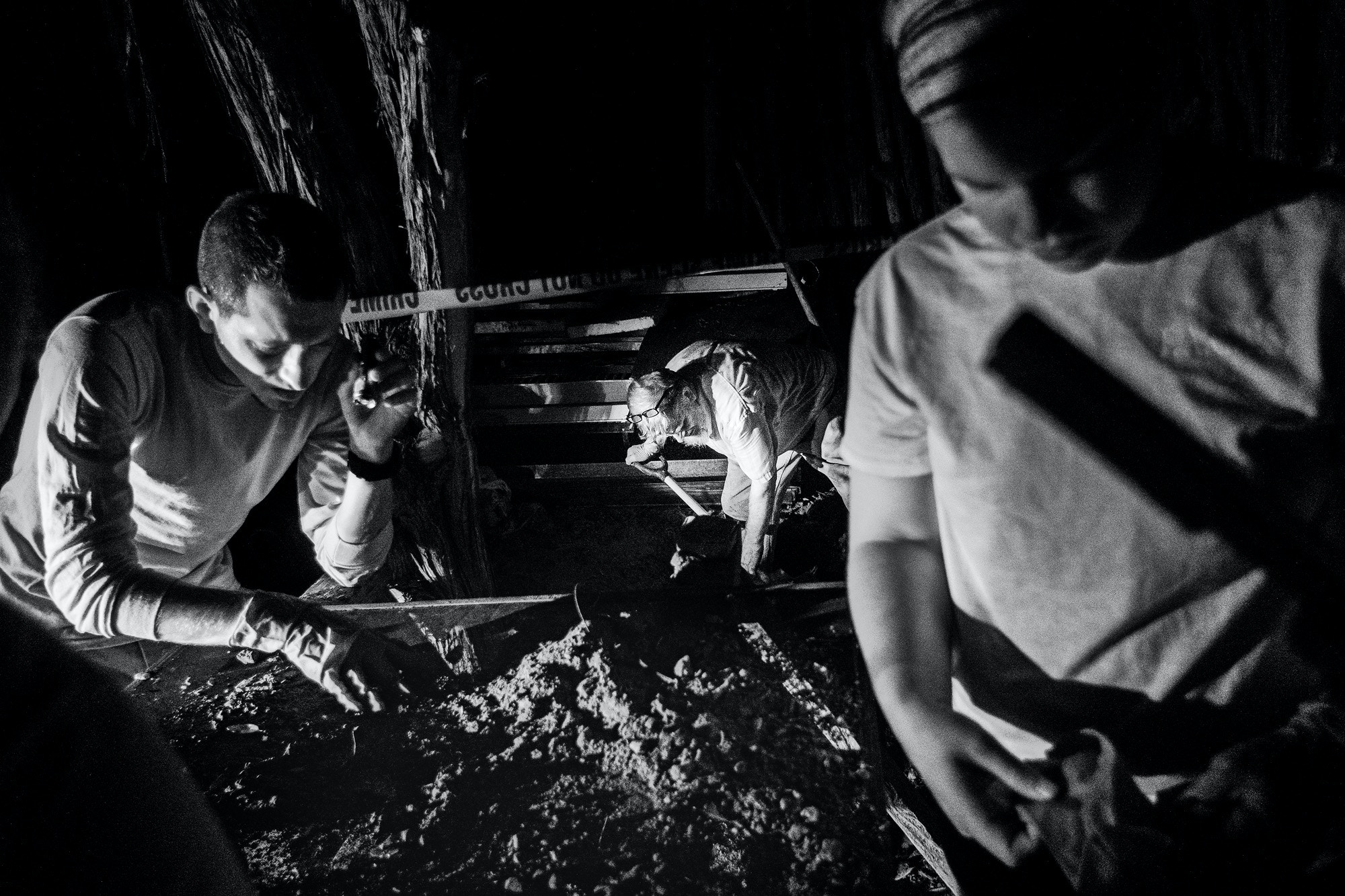 “No one even bothered to look closely enough to say, ‘Are these bones even human?’” he said. “No one looked at all. No one did anything.”

Immersing himself in a world of corpses and death, Shults said he was often asked how he was handling it all. In the case of the decomposition lab, he explained, he quickly grew accustomed to what he was seeing. “For me, and I think for me and most of the people that work there, it’s actually really easy to get used to,” he said. After all, he added, the donors are willing participants in the program. The migrants who come to OpID, however, are another matter. “The donors come in essentially with nothing. They come in usually naked, at most they might have a hospital gown. They don’t have any personal effects because their family has probably taken them or the funeral home has returned them or that sort of thing, and so they’re usually anonymized from the time they come in,” he said. “The OpID bodies, on the other hand, come in very much as people, and people that care deeply. They come in with the things that mattered to them the most. Whatever personal effects they chose to take, it had to be very minimal in order to safely get across the desert, so they selected what was valuable, and we see a lot of prayer cards, letters to and from family members, things that are very clearly intended as gifts for family members and children.”

“When presented with the scale of OpID’s bodies, essentially looking in the evidence and just seeing stacks of hundreds of skeletons, and certainly with the personal effects and the clothing — that to me was much harder to take than anything that I saw at the decomposition lab,” Shults explained. “And it’s never gotten easier.”

Shults is convinced that one day, in the course of exhuming graves and identifying corpses, the body of someone who is not a migrant will be found. “It’s just going to happen,” he said. “It’s going to be a hiking accident or something like that.” He believes the American public might then understand how broken the system in Texas is and, he suggests, change could come because the injustice of tossing a person in a grave without attempting to identify who they are will be plain to see. But while any progress in identifying bodies found in the Texas desert would be welcome, Shults said, the subtext of such a reaction would also underscore an ugly truth about the slow-motion disaster on the border right now; that in the minds of many, “The migrants somehow have family members who are grieving less.” Graduate student Alejandra Ayala Bas rests on her shovel while burying a donor’s body at Texas State University’s Forensic Anthropology Research Facility in San Marcos, Texas, Nov. 18, 2015. Researchers will compare the vegetation growth atop this grave to that from a nearby plot containing only backfill, refining methods for identifying clandestine burial sites. This image has been digitally altered to preserve the donor’s confidentiality.