The social network has detailed its fight against jihadist groups but has nothing to say about domestic radical groups. 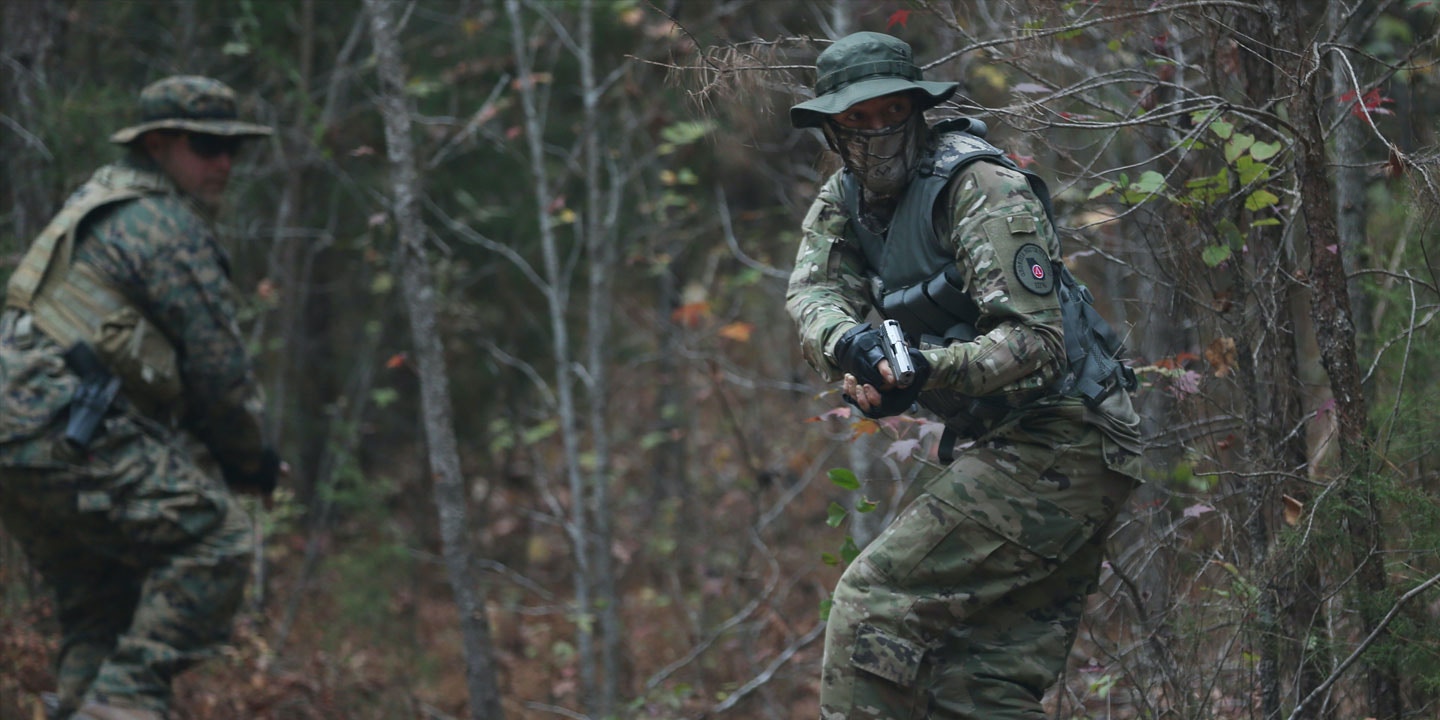 Publicly traded companies don’t typically need to issue statements saying that they do not support terrorism. But Facebook is no ordinary company; its sheer scale means it is credited as a force capable of swaying elections, commerce, and, yes, violent radicalization. In June, the social network published an article outlining its counterterrorism policy, stating unequivocally that “There’s no place on Facebook for terrorism.” Bad news for foreign plotters and jihadis, maybe, but what about Americans who want violence in America?

In its post, Facebook said it will use a combination of artificial intelligence-enabled scanning and “human expertise” to “keep terrorist content off Facebook, something we have not talked about publicly before.” The detailed article takes what seems to be a zero-tolerance stance on terrorism-related content:

We remove terrorists and posts that support terrorism whenever we become aware of them. When we receive reports of potential terrorism posts, we review those reports urgently and with scrutiny. And in the rare cases when we uncover evidence of imminent harm, we promptly inform authorities. Although academic research finds that the radicalization of members of groups like ISIS and Al Qaeda primarily occurs offline, we know that the internet does play a role — and we don’t want Facebook to be used for any terrorist activity whatsoever.

Keeping the (to put it mildly) highly motivated membership of ISIS and Al Qaeda off any site is no small feat; replacing a banned account or deleted post with a new one is a cinch. But if Facebook is serious about refusing violent radicals a seat at the table, it’s only doing half its job, as the site remains a cozy home for domestic — let’s be frank: white — extremists in the United States, whose views and hopes are often no less heinous and gory than those of the Islamic State.

In Facebook’s post, ISIS and Al Qaeda are mentioned by name 11 times, while the word “domestic” doesn’t appear once, nor are U.S.-based terror networks referenced in any other way. That gap in the company’s counterextremism policy is curious.

In January 2016, a band of armed militants led by Ammon and Ryan Bundy entered and occupied the Malheur National Wildlife Refuge in Harney County, Oregon. Members of the group, with ties to armed, extremist “patriot” groups like the Oath Keepers and Three Percenters, said they wanted to shift federal land to local control, and at one point Ryan Bundy told a reporter the group was willing to kill or die if necessary. It would take little work to draw a clear through line from the movement that spawned Timothy McVeigh to the loose confederation around the Bundy family. One of the radicals posted a “goodbye” video to YouTube, taking as a given that he would be slain by the government during the occupation. Between their assault rifles and their implicitly violent rhetoric, opinion pieces at Newsweek, the Washington Post, and CNN all argued that the occupiers were domestic terrorists.

Ammon and Ryan Bundy had earned extremist cachet prior to the Oregon takeover, when, in 2014, they joined with supporters (many of them armed) and their father, Cliven Bundy, to chase off agents of the Bureau of Land Management who were trying to confiscate Cliven Bundy’s cattle in connection with delinquent grazing fees. Sen. Harry Reid at the time denounced the ideologues as “nothing more than domestic terrorists” who do “not recognize the United States.”

And indeed, many in the “Patriot Movement” also consider themselves “sovereign citizens,” a logically bankrupt (and sometimes violent) strain of anti-government anger in which you simply declare yourself exempt from American laws and, in particular, the payment of taxes. At MSNBC, a former ATF agent described his work with homegrown extremists like those at Malheur:

It’s worth noting that Ammon Bundy and five of his followers were, surprisingly, acquitted of federal charges stemming from their occupation of the reserve, while federal charges in connection with the Nevada case remain tied up in court following a mistrial. Still, had the group’s members been born in Pakistan or Syria, Harney County would probably resemble the surface of the moon right now. American radicals like the Bundy clan are cuter about their fantasies of destroying the federal government than, say, ISIS, who of course won’t hesitate to explicitly call for violent attacks using every medium at their disposal. Domestic extremists are sometimes more careful about their words and rely on insinuations and dog whistles rather than overt threats, and American gun culture makes it easy to camouflage violent speech within political speech. But what is an online call for armed reinforcements and a willingness to shed blood (or die) if confronted by police if not a threat? Throughout the entire ordeal, the occupiers (and their sympathizers nationwide) made extensive use of the social web (including Facebook) to coordinate and spread their message (the Bundy Ranch Facebook group has nearly 200,000 followers today). Federal prosecutors and investigators with the FBI’s Domestic Terrorism Operations Unit zeroed in on the occupiers’ use of Facebook, Oregon Public Broadcasting reported at the time. Since the occupation, finding anti-government extremism on Facebook remains easy. This seems at odds with Facebook’s zero-tolerance policy. Asked whether the company is as committed to combating white extremists as jihadists, a Facebook spokersperson reiterated that the company’s policy was to refuse a presence to any person or group who supports a violent agenda. When asked about specific entities like the Bundy family, the spokesperson replied, “I can’t speak to the specific groups you cited, but, again, if a group has engaged in acts of violence, we don’t want to give them a voice on Facebook.” So what’s violence, then? “Does Facebook,” I asked, “consider the armed takeover of a federal building to be an act of violence?” The company’s reply: “I don’t have an answer on that.” Brian Fishman, a co-author of the Facebook company post on terrorism, did not answer a request for comment.

Daryl Johnson is a former Homeland Security analyst who spent years studying domestic threats to the United States. Johnson told The Intercept that although “not all extremists are violent,” treating domestic threats as something distinct from the likes of ISIS for policy purposes “on the surface makes sense, but if you start comparing and contrasting, it doesn’t.” Domestic extremists “are using social media sites as platforms to put forth their extreme ideas and a violent agenda, enabling people to recruit and spread” their ideology — an ideology that Heidi Beirich of the Southern Poverty Law Center said is as dangerous as any threat from the Middle East. “It’s as though terrorism can’t be white,” Beirich told The Intercept after reviewing the Facebook post. “They’re willing to go hardcore against ISIS and Al Qaeda, but where’s the response to white supremacism and its role in domestic terrorism or anti-government crazies?” To Beirich, “What this article is saying is how we counter Islamic terrorism,” not terrorism per se:

My position is this is outrageous. Terrorism from the Dylan Roofs of the world is as much of a problem here in the United States as it is from the Tsarnaev brothers. The bodies stacked on both sides is about the same since 9/11. I don’t understand why they can’t see that. It’s worrying to me because it plays into the narrative as though all terrorism is coming from radical Islam, which is a false narrative. This adds to that, and it takes our eye off the ball in terms of where terrorism comes from … A large chunk of our domestic terrorism is committed by folks with beliefs like those at the Bundy Ranch or Malheur occupation.

Without further comment from Facebook, one can only speculate about why ISIS gets top billing and Bundy supporters do not — but little speculation is needed. A beheading video or pipe bomb instruction image are no-brainers for content moderators, while posts about armed anti-government sedition are perhaps murkier (especially if Facebook is going to let algorithms do the heavy lifting). Labeling right-wing extremism as terrorism would also likely cause a public relations migraine Facebook doesn’t care for, particularly after reports of how it filters out bogus right-wing news sources have already tarnished its image on the right.

All of this is to say that the work ahead of Facebook, if it really does want to be serious about combating terrorism, is extremely difficult, and given the company’s track record, may well be fumbled. Preventing Facebook from being a place where anti-government radicals can comfortably spread an ideology of implicit violence feels reasonable, while blocking discussions about these figures and ideologies — in everything from academic or journalistic contexts to your dad’s News Feed — would not. When does sympathy for an armed radical group become support? When (if ever) does Facebook-cheering a violent group become complicity in the violence? This is deeply complex and horribly fraught, whether you’re looking at Mosul or Montana. Facebook knows this, which is why its article on moderating extremist content is titled “Hard Questions.” Facebook also knows that an overly broad crackdown on foreign terrorism would provoke the tiniest fraction of backlash compared to clamping down on right-wing white America, where love of assault rifle ownership and hatred for government are shared in polite society. But hard questions deserve better than cop outs, which is exactly what ignoring white, domestic terrorism amounts to: a cop out. If the company wants to live up to its commitments here, it will require even harder work, harder thinking, harder scrutiny, and harder debates. Yes, it might require sometimes banning extremists in cowboy hats.

Top photo: Members of the Georgia Security Forces are seen during a military drill in Flovilla, Georgia, on Nov. 12, 2016.