The NYPD is fighting by any means necessary to block a City Council bill that would assert oversight over police surveillance technologies. 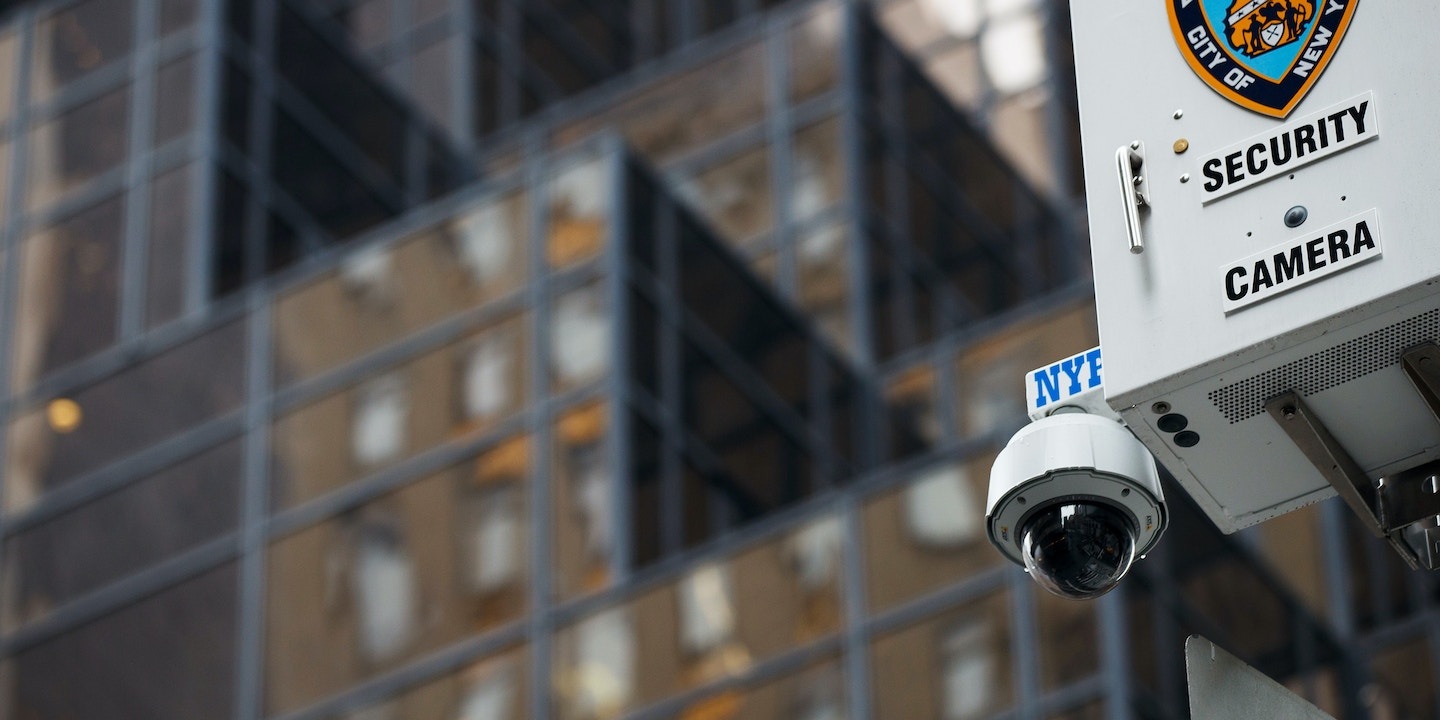 Earlier this year, New York City Council members Vanessa Gibson and Daniel Garodnick introduced the Public Oversight of Surveillance Technology Act, which would require public disclosure and dialogue on the New York Police Department’s purchase and use of surveillance equipment. The bill is in the weaker vein of similar legislation passed or under consideration by lawmakers in 19 cities across the U.S., where elected officials hope to write use policies and approve or deny the purchase of surveillance gear.

Criminal justice reform and civil rights groups have praised the POST Act for the transparency it brings to NYPD spy equipment purchases, but the bill already faces a steep path to passage as law. Mayor Bill de Blasio opposes it, meaning the city council will need to approve the legislation with at least 34 votes to override the mayor’s veto.

The tough odds haven’t stopped the NYPD from throwing itself into a bare-knuckles publicity campaign to push back against the proposed legislation.

NYPD Deputy Commissioner of Intelligence and Counterterrorism John Miller laid into the POST Act during a public safety committee hearing on June 14, calling the proposed bill’s disclosure requirements “insane” and “an effective blueprint for those seeking to do us harm.”

“There is a habit now, a trend of calling documented, authorized investigations ‘police spying,’” Miller said at the hearing. “This is all balled up in some kind of paranoia — we operate under strict rules.”

In a June 16 appearance on MSNBC’s “Morning Joe,” Deputy NYPD Commissioner for Legal Affairs Lawrence Byrne said, “This is not about transparency, this is about keeping New York City safe — this is about not revealing confidential law enforcement investigative techniques.” MSNBC did not invite any proponents of the bill to speak on the program, and the show’s hosts lobbed softball questions at Byrne and Miller when they weren’t busy working themselves into a lather about the perfidy of the Brennan Center, one of the prominent supporters of the POST Act.

During their recent testimonies at city council, Miller and Byrne made a number of statements that mischaracterized or omitted crucial details regarding the department’s record of transparency, its use of specific technologies like cell-site simulators, the surveillance of communities of color, and how such technologies are acquired by police. Here’s a rundown of those statements.

The NYPD is notorious for flouting the New York State Freedom of Information Law for even the most routine requests about police activity, contracts, and policies. Regarding surveillance technology, the department has been or is being sued for refusing to release information about facial recognition software, its use of predictive policing software, controversial X-ray vans, and the “mosque raking” program that placed the city’s Muslim communities under mass surveillance. Most recently, the local news channel NY1 sued the NYPD for footage from officers’ body-worn cameras, which are being introduced to precincts throughout the city this year. The police demanded $36,000 to release the footage.

The NYPD also recently invoked the Glomar response — the FBI’s famous “we cannot confirm or deny” construction — in response to requests for public records. It represents a bold new frontier in opacity for New York state’s open records laws, which are supposed to require affirmative or negative responses.

Addressing federal transparency requirements at the June hearing, Miller said that federal law doesn’t require the NYPD to release information on how technology is used for investigative or counterterrorism purposes. While Miller is correct about the exemptions to federal law for Privacy Impact Assessments, which were mandated by the E-Government Act of 2002, federal law enforcement nonetheless publishes highly descriptive documents for many sensitive databases on the open web. Federal authorities have released detailed documentation on the capabilities of ICEGangs, the now-discontinued gang database for Immigration and Customs Enforcement, as well as LeadTrac and FALCON-SA, two of ICE’s data-analysis tools used to track and identify suspects in criminal and civil immigration investigations.

Since a 1985 settlement over the NYPD’s surveillance of left-wing organizations, the department’s intelligence operations on political activities have been subject to a federal consent decree known as the Handschu agreement. The nature, extent, and unconstitutionality of the NYPD’s spying on political groups first became public during the 1971 trial of 21 Black Panther members accused of attempting to bomb police stations and department stores. The agreement between the department and the federal government established strict guidelines for how the NYPD could monitor First Amendment activity — those are the “strict rules” Miller was referring to during the city council hearing.

The cops, however, chafed at the Handschu restrictions for years. In 2003, they successfully convinced the presiding federal judge to loosen the limits, under the premise that they impeded the NYPD’s counterterrorism operations.

The Demographics Unit has been disbanded and the department’s “mosque-raking” operations led to a legal settlement and further operational restrictions last year, but activists and legal workers say the department’s surveillance in Middle Eastern and South Asian communities is still prevalent.

At the hearing, Byrne claimed the police were not “engaged in a surveillance program of any community” — a statement belied by the NYPD inspector general report that focused on the department’s surveillance operations of political activity involving people of Muslim origin. More than 50 percent of those investigations continued beyond their date of authorization, the report found.

Miller’s and Byrne’s assertions about the NYPD’s human intelligence operations received significant pushback from Queens council member Rory Lancman, who recalled past abuses despite court oversight. “The department has repeatedly over the years pushed the limits of what it can do in terms of intel gathering and surveillance,” Lancman said.

“There’s a reason,” Lancman added, “the Handschu agreement over time, on numerous occasions, has had to be modified and expanded.”

Funding and disclosure of surveillance equipment

For years, the NYPD has kept details of its purchase of surveillance equipment from public view, going so far as to redact even the most anodyne information about grant spending and rejecting my Freedom of Information Law requests about surveillance technology contracts on over 10 occasions since 2006.

There is supposed to be external oversight of the NYPD’s contracts by the independent city comptroller’s office, which registers agency procurements, and the Mayor’s Office of Contract Services. At the June hearing, Byrne explained the process.

“Every contract that the NYPD enters into, whether it’s for confidential technology or equipment or pens and pencils and legal pads, has to be approved by the mayor’s office of contracts and has to be registered by the comptroller,” Byrne said. “If the comptroller does not register the contract, we cannot go forward.”

Contracts for at least two of the NYPD’s major surveillance technologies — the department’s cell-site simulators, which collect information from nearby mobile phones, and the data-mining software from the security analytics firm Palantir — were not turned over by the comptroller’s office pursuant to a Freedom of Information Law request. According to a recent report by BuzzFeed, the NYPD paid Palantir $3.5 million annually for its services, which are reportedly being terminated. The Brennan Center has an ongoing FOIL lawsuit for documentation of Palantir’s work with the NYPD. The request unearthed contract records for the NYPD’s license-plate reader contractor ELSAG, Vigilant Solutions’ national database of billions of vehicle records, and ShotSpotter gunshot detectors that geolocate the sound of gunfire with permanently enabled microphones and issue automatic notifications for police.

There are multiple ways the police department can conceal contract information, aside from its intransigence on records laws. The city Law Department, which is a branch of the mayor’s office and handles most of the city’s legal affairs, can unilaterally declare a contract to be “registered” and not turn it over to the comptroller. The NYPD can also request that the comptroller review a contract in confidence and withhold that information from public disclosure. Or the department can channel the purchase of surveillance technology through the New York City Police Foundation, a private nonprofit organization that is not subject to public disclosure laws and receives major donations from firms like Axon, Palantir, and Microsoft, which sell technology to the NYPD.

One of the few technologies the NYPD openly discussed at the city council hearings was cell-site simulators, which are devices that mimic cellphone towers to identify, locate, and in some cases, intercept communications from cellphones. Last year, the New York Civil Liberties Union released records documenting the NPYD’s use of cell-site simulators over 1,000 times from 2008 through May 2015.

Byrne characterized the department’s use of the devices as “pursuant to a court order supported by probable cause” and affirmed they were only used to track the location of target phones.

However, the NYPD did come under fire last year for using court orders that do not spell out that a cell-site stimulator will be used to track a cellphone. Both the U.S. Department of Justice and the Department of Homeland Security have abandoned these orders in favor of warrants, which carry with them more privacy protections, for cell-site simulator use.

What’s more, Byrne’s assertion that the department’s cell-site simulators only gather data on target cellphones misrepresents how the devices actually work. They function by hoovering up signals from all cellphones within range, allowing searches through that pool of data for the target device’s identifying number.

Byrne’s remarks disturbed Michael Price, an attorney at the Brennan Center who testified in favor of the POST Act at the city council hearing. “NYPD literally believes that cell-site simulators work like PEN registers,” Price told The Intercept, referring to an older technology that tracks calls made and received by a target phone. “It is either a misunderstanding on Byrne’s part or a misrepresentation that underscores the need for the kind of disclosure outlined in the POST Act.” Price pointed out that both the Department of Justice and the Department of Homeland Security acknowledge the collection of nontarget data by cell-site simulators and require deletion within 30 days of collection.

No vote has been held yet on the POST Act. The NYPD campaign to oppose the bill in the court of public opinion has already won favorable coverage in the Wall Street Journal’s opinion pages. The department’s legendary intransigence on public disclosure and oversight, then, is likely to continue. And the city council, which has faced NYPD overreaches on issues like stop and frisk, will likely be stymied. If the POST Act represents the council’s last chance to shed some sunlight on the surveillance practices of the country’s largest police department, it may yield only a failed effort.

Top photo: An NYPD security camera hangs atop a light pole across the street from Trump Tower in New York on March 7, 2017.