Senior judges have ruled the British government’s weapons sales to Saudi Arabia can continue despite the Arab kingdom’s bombing campaign in Yemen. The United Kingdom’s High Court has ruled in favor of the British government to allow the continuation of arms sales to Saudi Arabia, despite widespread concerns over breaches of international humanitarian law in the Saudi-led bombing campaign in Yemen.

In a legal challenge led by London-based organization Campaign Against the Arms Trade, two senior judges ruled on Monday that the government “was not irrational or unlawful” in its decision to approve export licenses to the Arab kingdom. The 58-page verdict concluded that there was no “real risk” of “serious violations.”

CAAT said in a statement that it was “disappointed” with the ruling and plans to pursue an appeal. Nongovernmental organizations working in Yemen described the judgment as “a dark day for the people of Yemen.” More than half of the three-day hearing of the judicial review case that was held in February was closed to CAAT, the press, and the public. The judges stated that the U.K. government had “more sophisticated sources of information” than CAAT, but claimed the information could not be disclosed in open court “for national security reasons.”

British government officials licensed the sale of $4.2 billion (£3.3 billion) worth of arms to Saudi Arabia in the first 12 months of the Saudi-led bombing campaign in Yemen, which is now in its third year. As of January this year the U.K. Ministry of Defence was itself tracking 252 cases of alleged breaches of international humanitarian law following Saudi coalition airstrikes in Yemen.

CAAT’s lawyers argued that the government was in breach of U.K. and European Union law and the Arms Trade Treaty, ratified by the U.K. in 2014, which states that if there is “a risk of any serious violation of international humanitarian law,” exports should not be authorized.

Explaining the reasoning for their ruling, the two senior judges said that Saudi Arabia had addressed concerns by setting up its own investigatory body. However, the Saudi Joint Incidents Assessment Team has released the initial results of an investigation into just 20 strikes, including attacks on two Médecins Sans Frontières-supported medical facilities in northern Yemen. In 14 of the 20 strikes, the Saudi investigators absolved the coalition of wrongdoing or responsibility for alleged violations. 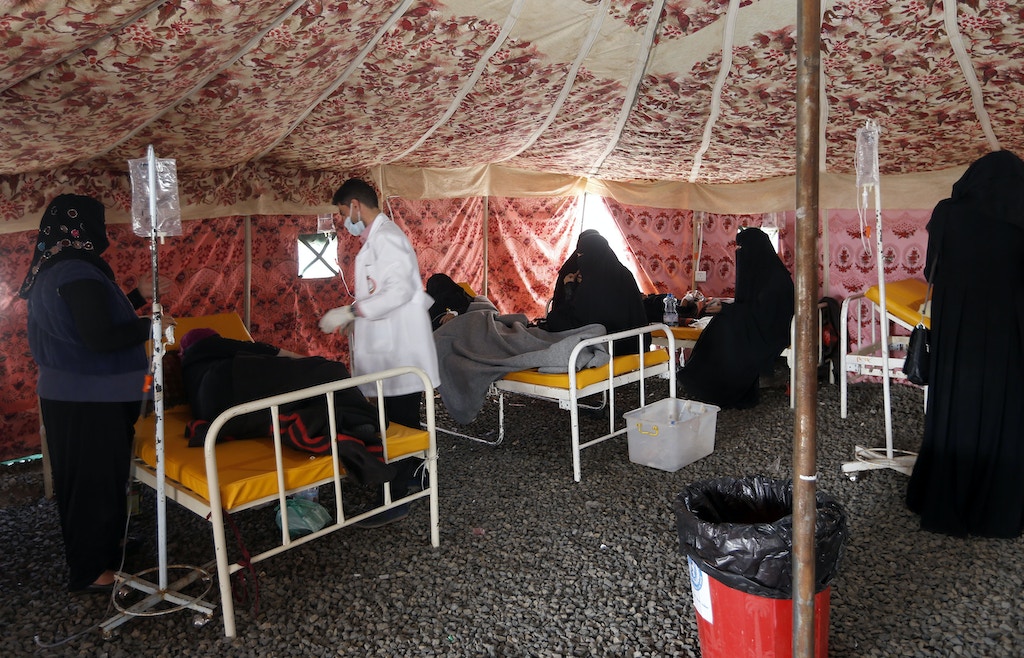 Yemenis suspected of being infected with cholera receive treatment at a makeshift hospital in Sana on May 25, 2017.

An array of international organizations — including a U.N. panel of experts, the European Parliament, and humanitarian and human rights groups — has repeatedly condemned the ongoing airstrikes against Yemen as unlawful. The British government has twice blocked attempts proposed through the U.N. Human Rights Council to establish a non-Saudi-led inquiry into alleged violations of international law.

Sir Vince Cable, a former British government minister, told The Intercept following Monday’s ruling: “I am disappointed by the verdict. U.K. dependence on exports to Saudi is unhealthy and is driving our foreign policy.” Cable signed off on U.K. arms sales to Saudi Arabia in his role as business secretary in 2015, the first year of the war. He has previously claimed he was “seriously misled” by the Ministry of Defence in the process of his decision making on whether to grant permission for sales to Saudi.

Mark Goldring, head of the U.K.-based charity Oxfam, also expressed dissatisfaction with the judgment. “So much evidence has been presented in this case of the devastating impact on Yemen from selling arms to Saudi Arabia,” said Goldring. “There is a clear moral case for the government to suspend its sales.”

Human Rights Watch, which has documented numerous cases of potential war crimes in Yemen, called the verdict “a serious setback for efforts to hold the British government accountable,” adding that the judgment rejected detailed evidence gathered on the ground.

The ruling was handed down amid a rapidly deteriorating humanitarian crisis in Yemen. Seven million people are facing imminent famine, and a cholera outbreak has killed more than 1,700 people since April — a crisis described by the United Nations humanitarian chief, Stephen O’Brien, as a “man-made catastrophe” resulting from the conflict. The number of cholera cases in Yemen is escalating at more than double the rate previously predicted by the U.N.’s World Health Organization, with numbers now reaching 300,000.

The war in Yemen has had a major impact on food imports as a result of the Saudi-led coalition imposing restrictions on imports, ostensibly to prevent weapons from reaching their opponents — Yemen’s northern Houthi rebels and soldiers loyal to the country’s former president, Ali Abdullah Saleh. In peacetime, Yemen imports about 90 percent of its food. In addition, Houthi-Saleh forces have also obstructed food and aid deliveries around the country.

The conflict began in 2014 after Houthi fighters seized Yemen’s capital. It escalated in early 2015, forcing incumbent President Abdu Rabbu Mansour Hadi into exile in Saudi Arabia. Since March 2015, Saudi, along with a coalition of regional nations backed by the U.S. and the U.K., has been trying to push back the Houthi-Saleh forces.

In 2015, The Intercept investigated eight Saudi coalition strikes that killed up to 175 civilians, revealing evidence of a pattern of indiscriminate bombing of civilians and targeting of first responders. Some 10,000 people have died in the conflict, with Saudi coalition airstrikes being the “single largest cause of casualties,” according to an August 2016 U.N. report.

While Saudi Arabia is the U.K.’s top arms buyer, the U.S. is the biggest exporter of weapons and military training to the kingdom. The boom in defense sales to the Saudis is set to continue after President Donald Trump announced a record arms deal worth up to $350 billion over the next 10 years during his first foreign trip as president to Riyadh in May, beating the previous record set by the Obama administration of more than $115 billion worth of sales from 2009 to 2016.

Similar recent attempts to suspend U.S. arms sales to Saudi have so far failed. The Trump administration notified Congress last month of its intention to resume the export of precision-guided weapons to the country, suspended under Obama in December. On June 13, the Senate voted 53 to 47 in a narrow defeat of legislation seeking to block some arms sales to Saudi.