Congress Trying to Sneak Through Major Giveaway to Defense Contractors

Defense contractors want to be able to hide how much it costs them to make stuff. Congress is on the brink of a major giveaway to defense contractors, tucking language into a must-pass piece of legislation that would broadly expand their ability to gouge the federal government on sole-source contracts.

The National Defense Authorization Act, or NDAA, is practically the only bill Congress passes on time every year. The last 50 NDAA’s, which authorize funds and set policy for the Department of Defense, have reached the president’s desk without a holdup. Education, healthcare, and jobs can wait, but supporting the troops — actually, supporting the defense contractors who make the weapons — must never face a delay. The bill even goes through a regular process, with dozens of amendments and bipartisan votes. It’s like nothing else in Washington.

This year’s version of the NDAA, which authorizes $696 billion in military spending, includes a nice gift for contractors, particularly those that have monopolized a particular part the Pentagon needs. Buried in the NDAA, which is scheduled to pass the House Friday, is an increase in the amount of products which can be sold to the military without providing cost information — data about the price of manufacturing and labor. Without this information, monopoly contractors could enjoy a huge markup on their sales to the government without anyone knowing about it.

Section 803 of the House NDAA raises the threshold for cost information in “noncompetitive” contracts — meaning contracts that are sole-source, with no other supplier for the government — from $500,000 to $2.5 million. The Senate version, in Section 813, raises that threshold to $1 million. If both pass as written, the gift to contractors will be assured; the only question would be how big.

Hiding cost information benefits a small group of sole-source contractors, including TransDigm, which I wrote about for The Intercept in April. TransDigm, a private equity-style conglomerate, specializes in cornering the market for proprietary parts for military aircraft and then jacking up the price. Several Democrats in Congress have highlighted TransDigm’s practices, and the Defense Department’s inspector general is actively investigating the company.

Increasing the threshold for disclosure could allow TransDigm to further avoid sharing information with the Pentagon. Critics charge that TransDigm has subverted the cost information requirement by creating the illusion of multiple suppliers for a product, when in fact they are all owned by TransDigm. The company wouldn’t need to always resort to such subterfuge if this new loophole becomes law. They can also split up contracts to stay under the dollar threshold and avoid disclosure.

The change updates the Truth in Negotiations Act (TINA), an important law passed in 1962 that almost nobody knows about. That law was part of a strong anti-monopoly tradition in military procurement, dating back to the exposure of profiteering by the Truman Committee during World War II. In the 1950s and 1960s, the Pentagon favored competitive bidding, and under TINA, any sole-source contracting required cost information, so procurement officers at the Defense Logistics Agency could ensure they were only paying a reasonable markup, without price gouging.

This model of competition in defense contracting ran aground after the Cold War, when policymakers made streamlining the primary objective. The number of audits of contractor facilities fell. Experienced procurement officers were let go. Buy American mandates were loosened. Contractors won an exception to cost information disclosure if they listed their items as “commercial.” Indeed, the House’s justification for raising the cost information threshold, obtained by The Intercept in a summary of the NDAA, is to “reduce administrative burdens” and “improve process timelines for smaller contracts.” Keeping costs down is no longer the focus.

In addition to creating fake markets, TransDigm uses the commercial item exception routinely (even if there’s no commercial market for the products), according to an Inspector General’s report in 2006. The increased threshold exemption just adds to the company’s bag of tricks.

Partially due to these procurement changes, the defense contractor sector has concentrated significantly since the 1990s. A handful of companies control the sector, and all these loopholes for disclosure prevent public understanding of whether the taxpayer is being harmed by exorbitant pricing. 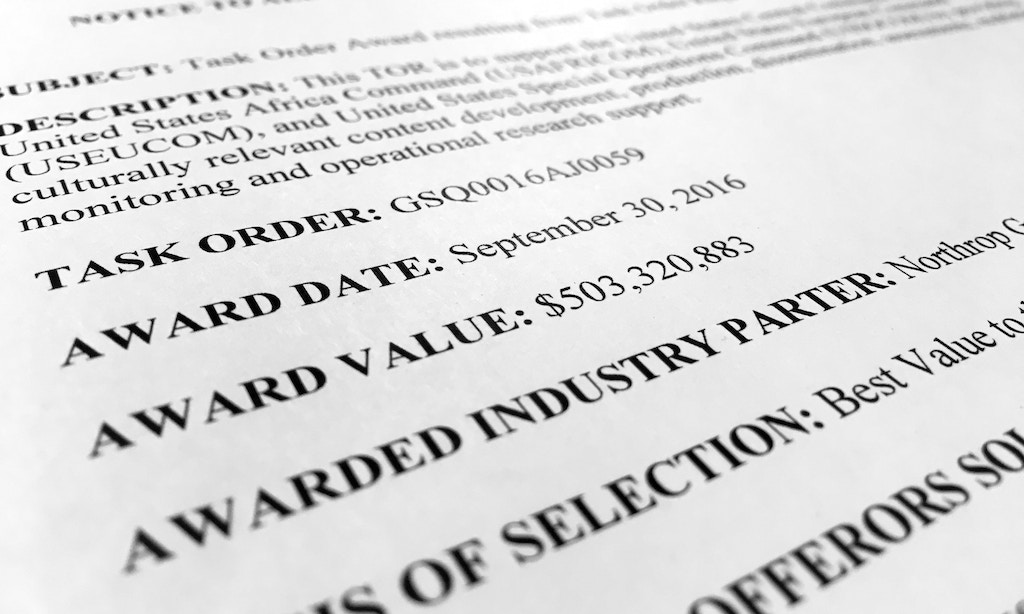 This document photographed in Washington on in January details the announcement of a five-year, $500 million contract.

“There’s a very serious monopoly problem in the defense industrial space, and it’s time Congress start taking it seriously,” said Matt Stoller, a fellow with the Open Markets Program of the New America Foundation, who is also an Intercept contributor.

It’s hard to identify how this loophole got into the NDAA, because the process is so secretive. Citing national security, the Senate Armed Services Committee did all its work on the bill this year in closed sessions. While the House Armed Services Committee markups were open, some of the subcommittee hearings lasted as little as 2 minutes, merely recording votes on their part of the bill. Seventeen organizations, led by the Project on Government Oversight, protested the closing of the NDAA committee process, insisting, “It’s time to bring the NDAA into the light of day.”

Some people are watching over the process: the ones paid by their defense contractor clients. Lobbying by the defense industry has exceeded $70 million annually for five of the past six years.

The Armed Services Committees claim they are cracking down on the acquisition process. The Senate bill authorizes a study on software acquisition, and enhanced training for procurement officers. The House version requires more oversight in service contracts, which make up about half of Pentagon contract spending. There’s even a provision in the House bill inserted by Rep. Ro Khanna, D-Calif., who has led the charge on TransDigm, to study the ownership structures of defense contractors, to prevent “hidden monopolists with unreasonable prices.”

But the NDAA also gives a boost to another monopoly provider — Amazon. Both the House and Senate encourage the Pentagon to use online commercial sites for procurement, with speed and convenience again being the primary goal.

So far, no amendments have been filed in either chamber to eliminate the increase on sole-source cost information thresholds. If it becomes law, it’ll be hard to even gauge its impact, because the entire point is to prevent disclosure of how much monopoly defense contractors are overcharging the government.

Top photo:U.S. Marines advance on the Black Sea shore during a military training exercise in Romania on March 20, 2017.