In a dramatic vote, Senate Republicans moved forward on repealing the Affordable Care Act. But to what ends — if any — remains unclear. 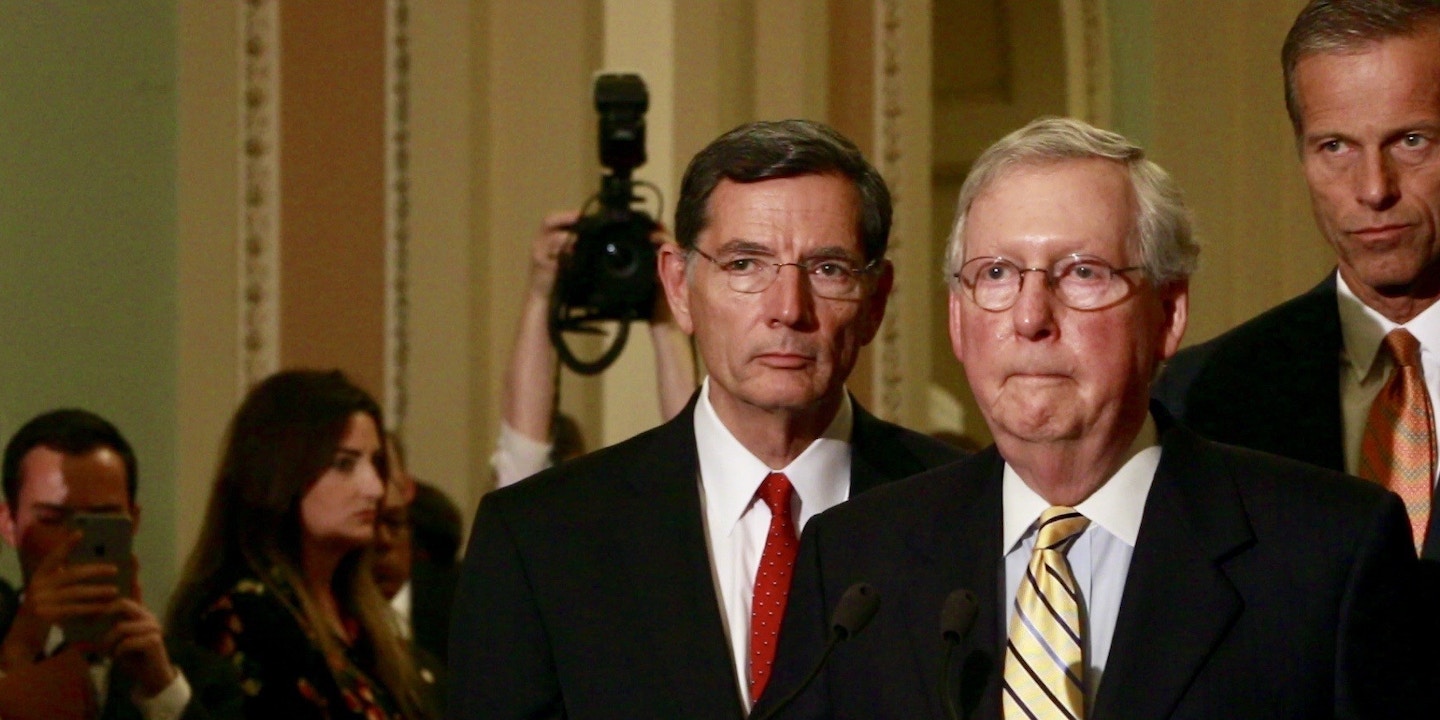 Driven forward by taunts and threats from President Donald Trump, 50 Republicans snapped to attention in the Senate on Tuesday and voted in dramatic fashion to proceed to a debate on repealing the Affordable Care Act.

The vote was heralded as a major achievement, but it was only accomplished after Republican senators were convinced that it would not lead to either repeal or Senate Majority Leader Mitch McConnell’s replacement bill passing during this round of debate. On Tuesday night, nine Republicans and all Democrats joined together to crush the Better Care Reconciliation Act — McConnell’s replacement measure — by a vote of 57-43.

Then on Wednesday afternoon, a bill that had passed in 2015 to repeal most of the Affordable Care Act outright was also defeated 55-45, this time with seven Republicans defecting.

Sen. John Thune, R-S.D., a member of leadership, suggested the GOP’s goal had been significantly scaled back. “I think it’s to try and get the best product we can out of the Senate, given the reality we have to deal with,” he told The Intercept when asked if the party’s aim was just to get something out of the upper chamber to reconcile with the version passed by the House in May.

Tuesday’s drama was heightened by the return of an ailing Sen. John McCain, R-Ariz., the former Republican presidential candidate who was flown in on a private jet to cast a needed vote. McCain was greeted by a standing ovation from his colleagues on both sides of the aisle before he grinned and flashed two thumbs up, voting to move forward on a bill the Congressional Budget Office says would cost millions of people their health insurance.

He was then given special dispensation to address his colleagues, and delivered an Aaron Sorkin-esque speech about the decline of compromise, the rise of partisanship, and the need to overcome it. The distance between his speech and the vote he had just cast could hardly have been greater, but he attempted to fill it with a promise that the process he was voting to move forward today would fail, and he was very unlikely to vote for the end product. (He voted for McConnell’s replacement Tuesday, then voted against full repeal on Wednesday. He then cast a vote against a Democratic measure that would have sent the bill to committee for hearings, precisely the thing he had demanded.)

McCain will stay for just a few days in Washington, he said, before he’ll return to Arizona to begin treatment for a type of brain cancer that is fatal in an overwhelming number of cases, and took the life of his friend and colleague Sen. Ted Kennedy, Democrat of Massachusetts.

While McCain begged the Senate to return to “regular order” — committee votes, thoughtful legislating, that sort of thing — the process his vote unleashed could make the last six months look downright deliberate. And, in the best case (legislative) scenario for McConnell, R-Ky., a conference committee will deliver a take-it-leave it bill that 50 of his colleagues will agree to take.

To get to this point, McConnell had to effectively take off the table the proposals that had been on it up until last week. The pomp and the circumstance served to obscure the reality that the only thing accomplished was an agreement to debate something — though that something is still itself obscured.

The new idea is to come up with a “skinny repeal.” This would consist merely of eliminating the individual and employer mandates and, perhaps, the medical device tax on large non-retail medical equipment.

Would there even be 50 votes for a skinny repeal? “We’ll see. I don’t know. I think there are things we can get 50 votes for at the end of the process,” Thune said.

That “bill,” the lowest common denominator of relatively unpopular Obamacare items, would then go to a House-Senate conference to merge with the House-passed American Health Care Act. There it would be dramatically re-written.

“Each of these steps along the way gives you a little more clarity. If what we are able to pass in the Senate are items that all 50 Republicans — or at least 50 Republicans — agree on, that would get us to a conference with the House. But you’d still have to work out differences with the bill in the House that has a lot of features in it that may not end up being in whatever comes out of here,” said Thune.

Whatever came out of conference would then get an up-or-down vote in both chambers of Congress. “All the things you are trying to avoid will emerge from that conference,” Senate Minority Leader Chuck Schumer, D-N.Y., warned his moderate Republican colleagues.

Among Republicans, only Sens. Susan Collins, of Maine, and Lisa Murkowski, of Alaska, voted against the motion to proceed. By moving forward on the motion, senators like Ohio’s Rob Portman, Nevada’s Dean Heller, and West Virginia’s Shelley Moore Capito risk being left with nothing but a take-it-or-leave-it bill at the end, under enormous pressure to cave.

“Make no mistake about it. There is no doubt — and we all know when the bill gets to conference — who’s going to call the shots,” Schumer said, pointing to the most conservative faction in the House. “The Freedom Caucus, which will be for full repeal or something even worse than what came from the House. And remember: On the House bill, a whole number of Republican senators said they wouldn’t vote for it.”

Freedom Caucus Chair Mark Meadows has declared there is “zero” chance skinny repeal would pass the House, meaning the conference committee would need to attach it to a more comprehensive bill.

It’s an unsurprising turn of events for McConnell, who has catered mainly to his right flank throughout the deliberations on the health care bill. But it’s an embarrassment for senators who furrowed their brow and voted to proceed, stepping into a process where their role will be thoroughly silenced.

This upends the long-standing promise McConnell made these wavering senators over health care. He said repeatedly that they would have the opportunity to amend the bill to their liking on the floor, if they’d only pass a motion to proceed. Even in his floor speech before the vote, McConnell referred to an “open amendment” process, where Senators could “work their will.”

But what McConnell has set in motion would rob these senators of that ability.

That’s because skinny repeal is just a vehicle to advance the process, as Thune articulated. What’s in it doesn’t really matter, and that includes any additional amendments senators manage to attach. The real action would occur in that House-Senate conference negotiation, where the leadership teams of both Republican caucuses would hash out the final bill. Portman, Murkowski, Heller, and their colleagues would be as distant from that negotiation as they were from knowing what they would voted on today.

And then the so-called moderates, with no chance to pass an amendment, would be told to vote for the bill out of party solidarity, to keep the seven-year promise of repealing Obamacare. They would face enormous pressure to advance a bill they had no say on. It is the exact opposite of what McConnell promised.

In his statement explaining his support for moving forward, Heller said his vote “gives us the opportunity to fight … for commonsense solutions that could improve our health care system.” This is false; the vote to go down the skinny repeal road actually forecloses that opportunity. Heller, who publicly rejected a motion to proceed on the original repeal and replace bill in June, once understood that. Capito, who voted to proceed, says she will “continue to push for policies that will result in affordable health care coverage for West Virginians.”

Their ability to do that, though, requires credibility that they have the will to kill it in the end. Murkowski and Collins clearly do. McCain says he does, though he has spent his career straddling the same gap he did today, just never so openly. Capito, Heller, and Portman are wild cards. “I didn’t come to Washington to hurt people,” Capito famously said when declaring her opposition to a previous motion to proceed.

Yet the old dynamics that have made agreement elusive so far will remain. The more Capito and Portman can extract, the less attractive the bill becomes to the far right, and so on.

And then there are the likes of Jerry Moran of Kansas, Mike Lee of Utah, Rand Paul of Kentucky, Tom Cotton of Arkansas, Ron Johnson of Wisconsin, and Ted Cruz of Texas, who have all expressed opposition to versions of the bill that have been floated so far.

Johnson, on Tuesday, showed the power that each senator has, with each holding a deciding vote. He came late to the vote, and stood in front of McConnell’s desk, engaging him in an intense conversation that went longer than 10 minutes. As it went on, McConnell’s face reddened and he gripped his desk with a force that seemed to test the strength of the centuries-old wood. With all eyes in the Senate on the pair, the conversation was finally broken by McCain’s entrance. After McCain voted aye, Johnson joined him.

McConnell, by all accounts, has long been ready to move on from Obamacare. It was a campaign tactic that had served its purpose. But Trump isn’t finished with his focus on undoing Obama’s legacy, and McConnell is finding ways to keep the repeal effort alive. At what cost to him, his colleagues, the Senate, and the American people remains to be seen.

Sign up to get Ryan Grim’s newsletter, Bad News, in your inbox. This story has been updated to include votes on Tuesday and Wednesday.