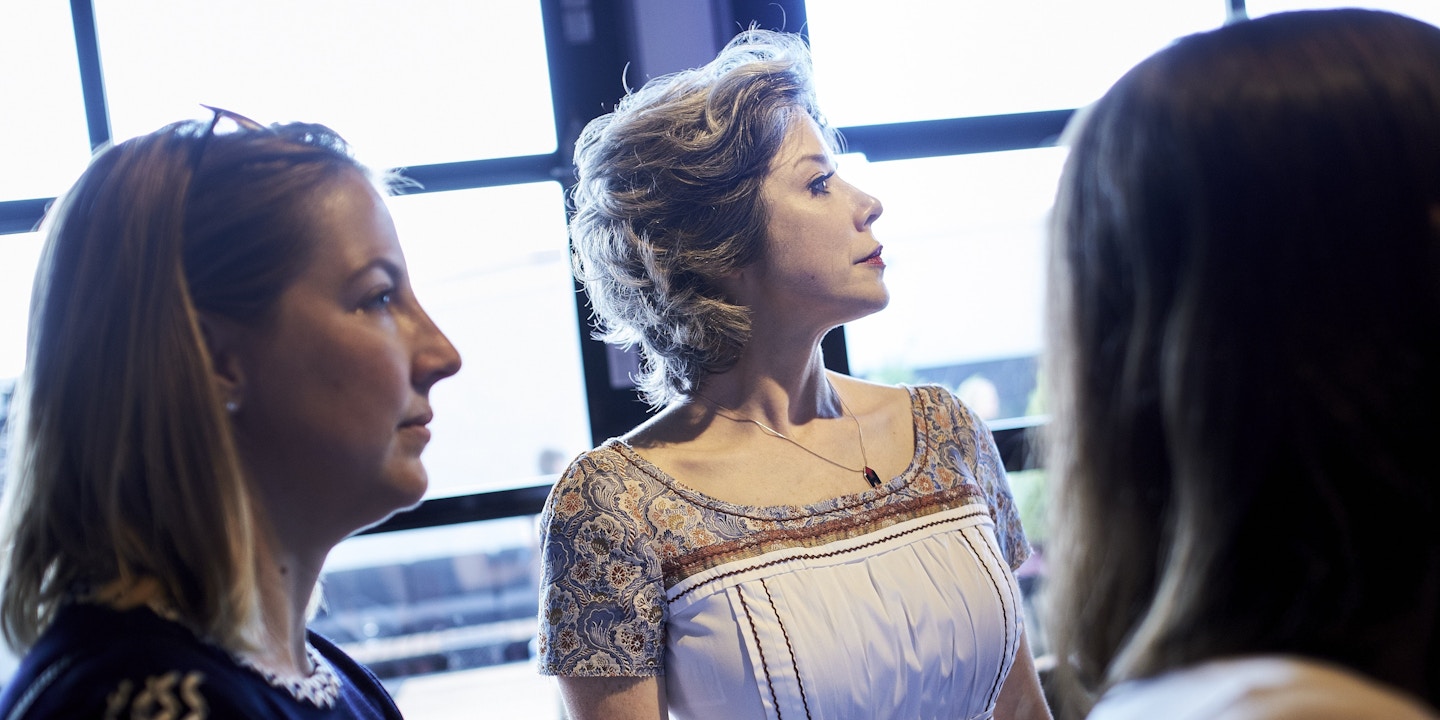 After President Donald Trump’s upset election victory, Democratic insiders who worked on Hillary Clinton’s failed presidential bid weren’t necessarily relegated to the sidelines. Many, in fact, are cashing in as lobbyists — by working to advance Trump’s agenda.

Lobbying records show that some Democratic fundraisers, who raised record amounts of campaign cash for Clinton, are now retained by top telecom interests to help repeal the strong net neutrality protections established during the Obama administration.

Others are working on behalf of for-profit prisons on detention issues, while others still are paid to help corporate interests pushing alongside Trump to weaken financial regulations. At least one prominent Clinton backer is working for a health insurance company on a provision that was included in the House Republican bill to gut the Affordable Care Act.

While Republican lobbyists are more in demand, liberal lobbyists are doing brisk business that has them reaching out to fellow Democrats to endorse — or at least tamp down vocal opposition to — Trump agenda items.

“These cases are clear, disturbing examples of the gulf between the interests of many of the Democratic Party’s big-money donors and those of the party’s progressive base and America’s working families,” said Kai Newkirk, co-founder of Democracy Spring, a progressive coalition.

The net neutrality debate is a case in point. The biggest fundraisers for the Clinton campaign — Democratic lobbyists such as Ingrid Duran, Vincent Roberti, Steve Elmendorf, Al Mottur, and Arshi Siddiqui — are now lobbying on behalf of AT&T, Verizon, or Comcast on net neutrality. These companies dominate the telecom industry, which is working with the Trump administration to unwind one of President Barack Obama’s biggest accomplishments.

In 2015, the Obama administration, with great fanfare, reclassified broadband services as a utility using Title II of the Communications Act. In doing so, the reclassification avoids court challenges, paving the way for strong regulations that require internet service providers to treat all web traffic in the same way. The principle is known as net neutrality, which advocates say is crucial for the internet remain open to the free flow of information and innovative services.

Ajit Pai, a former Verizon attorney appointed by Trump to serve as chairman of the Federal Communications Communication, is attempting to roll back the Title II reclassification and have companies simply commit to a voluntary form of net neutrality.

“The industry supports strong consumer protection rules but Title II is an over-the-top, archaic regulatory framework,” said Mottur, a Democratic lobbyist, in a brief interview with The Intercept explaining his work.

Mottur raised $95,606 for the Clinton campaign. Now, as a lobbyist for Comcast and the National Cable and Telecommunications Association, Mottur is supporting the Trump administration’s effort to undo net neutrality.

In April, when the FCC decision was announced, Mottur tweeted in support of the plan, claiming a roll back of Title II reclassification will “lead to more capital investment in telecom sector and boost economy.” Pai, the FCC chairman, liked the tweet.

Net neutrality advocates have expressed concern about the growing reach of the telecom lobby.

“The only way big phone and cable companies can get political support for such unpopular policies like killing net neutrality is by hiring powerful party operatives — Democrats and Republicans alike,” said Joe Torres of Free Press, a nonprofit that advocates for net neutrality. (Free Press receives financial support from the Democracy Fund, which is funded by Pierre Omidyar. Omidyar founded The Intercept’s parent company, First Look Media.)

“Hopefully elected officials will reject the industry talking points being made by these hired operatives and look out for the communities they claim to represent,” Torres added. “Opposing net neutrality would harm communities of color and other marginalized groups by silencing their digital voices and their ability to speak for themselves in fighting for a more just society.”

Other Democratic lobbyists did not respond to requests for comment, but many of their lobbying disclosures demonstrate a realignment in support of Trump’s policy agenda.

A well-known lobbyist who runs in powerful Democratic circles, Heather Podesta, volunteered for Clinton during the New Hampshire primaries. She collected at least $407,000 for the campaign. In recent months, Podesta has tweeted from the Center for American Progress Ideas Conference, an event billed as a platform for the “Resist movement,” and has continued to give cash to congressional Democrats.

Podesta, however, whose New Year’s resolution was to “Make Lobbying Great Again,” has adapted to Republican rule by rebranding her lobbying firm from “Heather Podesta + Partners” to “Invariant,” a name change to reflect “an expanding bipartisan team” with ties to the Trump administration.

Records show Podesta has lobbied this year on behalf of financial management and insurance giants Prudential and New York Life on the fiduciary rule, the regulation fought for by the Obama administration that was designed to require financial planning companies to act in the best interests of their clients. Early in his administration, in a decision cheered by the industry, Trump ordered a delay in the implementation of the rule.

Other Democratic lobbyists have found that their corporate clients’ interests align with the Trump administration. Some, like Podesta, are taking financial planning industry cash to work on the fiduciary rule.

Steve Elmendorf, a former senior adviser to Clinton’s 2008 run, maintained a high-profile role with Clinton’s 2016 run, raising $341,000 for the campaign. He is now one of the most prominent corporate lobbyists in Washington, D.C. Records show that Elmendorf, too, lobbied on the fiduciary rule. His client, the Securities Industry and Financial Markets Association, a trade group for firms like Prudential, has made delaying the rule a major goal and celebrated Trump’s move to delay implementation.

UnitedHealth, the health insurance giant, is also an Elmendorf client. Filings made to ethics officials on Capitol Hill reveal that Elmendorf is helping UnitedHealth work on issues related to the Affordable Care Act, including the health insurance industry tax, a provision of the ACA that UnitedHealth has made clear it seeks to repeal or delay. Congressional Republicans have said that if they are successful with their overhaul of the law, the tax will be gone.

A former Democratic National Committee fundraiser from Bill Clinton’s days as president, Richard Sullivan, served as a major fundraiser for Hillary Clinton’s campaign last year. He bundled at least $345,218 for the campaign, according to Federal Elections Commission records. Sullivan is also registered lobbyist for the public relations and lobby firm Capitol Counsel, where he works on behalf of private prison giant Geo Group to convince lawmakers of the “benefits of public-private partnerships in the delivery of secure residential care in correctional and detention facilities.”

The Florida-based Geo Group is particularly close to the Trump administration; it was one of the few firms to donate corporate money to a Trump Super PAC during the election, finance the inauguration, and openly celebrate Trump’s decision to vastly expand the detention and removal of undocumented immigrants. The firm was among the first private companies to win a contract from the Trump administration for a federal immigrant detention center, a deal worth $110 million.

Lobbyists often use their ability to bundle cash for candidates and party organs as a way of win an audience with lawmakers on behalf of their clients. As The Intercept has reported, lobbyists for Goldman Sachs and the Securities Industry and Financial Markets Association, the trade group, raised big money for the Democratic Congressional Campaign Committee, using their sway to pressure the party to adopt policies favorable to their industries and to abandon economic populist messaging that targeted the financial sector.

Trump’s election has been called a “bonanza” for Washington lobbyists, as K Street seeks to enrich itself by harnessing the administration’s zeal for rewarding corporate allies. For many Democratic insiders, there is fortune to made even in electoral defeat.

The Intercept spoke to several progressive activists who expressed outrage that leading Democratic Party officials are now advancing the Trump agenda, but were reluctant to comment on the record, for fear of angering powerful Democrats. But a few activists, like Democracy Spring’s Newkirk, decided to speak on the record.

Becky Bond, an activist and former Bernie Sanders adviser who also spoke out, said, “When Democratic insiders team up with Comcast and the private prison industry, they make it pretty difficult to see how the party can rebuild relationships with the voters it needs to bring back into the fold.”

“Destroying the internet and maximizing the profitability of mass incarceration,” she added, “is not what I would call a winning strategy for Democrats who want to take back power in 2018.”

Top photo: Heather Podesta, a lawyer and lobbyist based in Washington, D.C., at an event hosted by Politico during the 2016 Democratic National Convention in Philadelphia, on July 27, 2016.