If John McCain Was Telling the Truth in His Big Speech, He Can’t Vote for “Skinny Repeal” 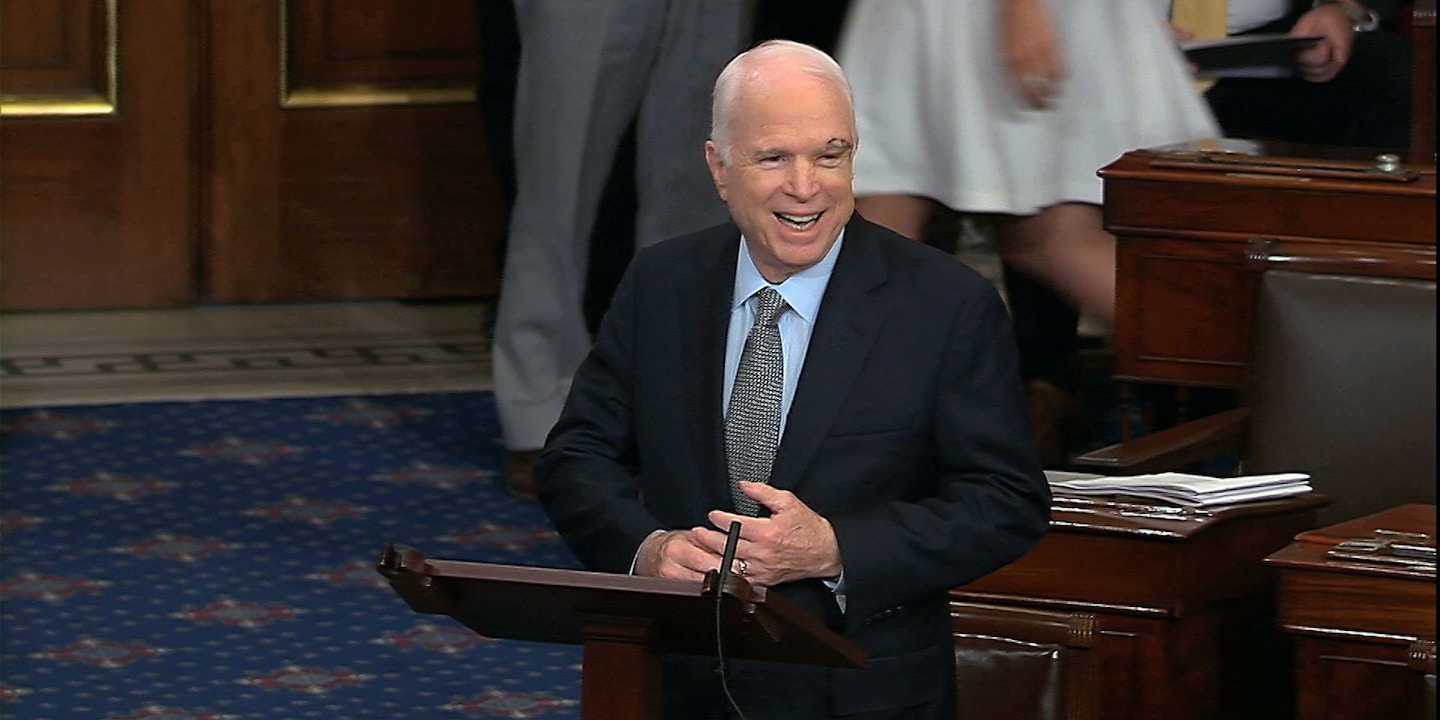 Arizona Republican Sen. John McCain returned to the Capitol on Tuesday, just 11 days after brain surgery, and voted to open debate on the GOP’s health care bill. He then delivered a speech in which he made a specific pledge: “I have changes urged by my state’s governor that will have to be included to earn my support for final passage of any bill.”

So what changes does Ducey want?

A month ago Ducey wrote a letter to McCain explaining his wishes in detail. Here’s how it began:

As you know, I have said for years that Obamacare is a policy disaster that must be repealed. It has devastated the commercial insurance market here in Arizona, eviscerating choice and creating double and triple digit increases year over year. This is unsustainable, indefensible, and must be addressed by Congress.

Obeying Ducey’s guidelines would therefore make it impossible for McCain to vote for the “skinny repeal” of the Affordable Care Act that Senate Majority Leader Mitch McConnell is rumored to be readying for a vote as soon as Thursday night. Ten governors, five Democrats and five Republicans, have written to the Senate declaring their opposition to skinny repeal, although Ducey is not among them. (Neither McCain nor Ducey immediately responded to requests for comment.)

McConnell refuses to make the bill public, so it’s impossible to be absolutely certain what’s in it, but people who’ve seen it say it would eliminate the ACA’s individual and employer mandate and some of its taxes, while leaving the rest of it, including its Medicaid expansion, in place.

Senate Democrats have asked the Congressional Budget Office to score these changes. According to the CBO, they would raise the cost of insurance policies in individual exchanges by 20 percent (as well as lead to 16 million fewer Americans having health insurance by 2026). This increase in costs is a logical outcome of dropping the requirement that individuals have insurance, since some healthy people would simply wait until they had a serious illness to get coverage — thereby creating a sicker, more expensive risk pool.

The rest of Ducey’s letter details his concerns about any bill’s treatment of Medicaid. McCain has in fact attempted to address these, introducing three amendments on Wednesday based directly on Ducey’s list of issues. Ducey’s worries, however, would be irrelevant for skinny repeal, since it would not change Medicaid.

Many Republicans have used premium increases on the individual market as a rationale for altering the ACA, but then nonetheless supported changes that would make insurance more expensive. The question now is whether McCain meant what he said in his celebrated speech — and whether Ducey actually meant what he said in the beginning of his letter and will hold McCain to it.

Top photo: This still frame from video provided by Senate Television shows Sen. John McCain, R-Ariz., speaking on the floor of the Senate on Capitol Hill in Washington on Tuesday, July 25, 2017.