The Intercept Brasil Completes its First Year, With Plans to Grow Further

Our mission is to strengthen Brazil’s talented but under-resourced independent journalism, something no democracy can thrive without.

The Intercept Brasil turns one year old today. On our launch date of August 2 of last year, we explained our purposes and objectives by observing that “there is a hunger among Brazilians for alternative forms of reporting.” That hunger is grounded in the grim reality that the country “has long been dominated by a tiny number of powerful media institutions, almost all of which supported the 1964 coup and the subsequent 21-year brutal right-wing military dictatorship that followed, and which are still owned by the same handful of extremely rich families responsible for that history.”

We viewed our mission as working to strengthen Brazil’s talented but under-resourced independent journalism, something no democracy can thrive without. We were determined to give a platform to voices, perspectives, and critical events that went deliberately ignored and excluded by the country’s largest media outlets. As we put it last August: “In a remarkably diverse and pluralistic country, [the media’s] ownership homogeneity has resulted in a media landscape that stifles both diversity and plurality of viewpoints.”

And central to our mission was to bring this journalism to all parts of Brazil, as well as using our status as an international news outlet to publish our journalism in both Portuguese and English and thus highlight our Brazil reporting internationally. We also vowed to use our expertise in reporting on large leaks to help foster a climate of source protection and transparency through whistleblowing.

After a year in operation, we view this mission as more vital than ever, and are more excited than ever at the opportunities to work alongside other independent outlets to contribute to the spirit of independent journalism that has been lacking in Brazil for so long. As the country’s political and economic crises deepen, and as the 2018 presidential election presents a wide range of possibilities from the exciting to the genuinely frightening, the need for aggressive, adversarial and truly independent journalism will be greater than ever.

We are proud of the talented and diverse team of reporters, editors and columnists we have assembled in just one year. And they have produced a great deal of exclusive, high-impact investigations and insightful analysis that has helped shape the news cycle, expose high-level corruption and compel reforms.

Just last week, our investigation of the finances of House Speaker Rodrigo Maia, next in line to the presidency, forced him to explain how he ended up owning offices used by Odebrecht and the bank BTG Pactual that were previously undisclosed. In May, our exposé of a “tourist” slave plantation by Cecília Olliveira led to reform measures memorialized in a agreement between the planation and the Public Ministry.

Thanks entirely to original reporting by The Intercept Brasil in January, the Public Ministry ordered the federal government to pay R$10 million in compensation to an indigenous tribe that was violently raided by the Federal Police in 2012. The article is part of a 14-part series produced in partnership with the US-based environmental news site Mongabay 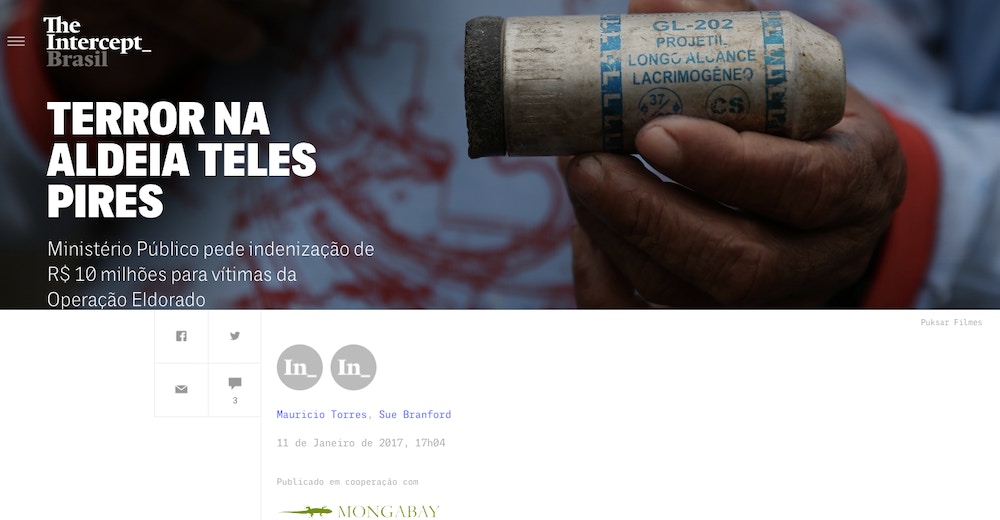 In April, the Brazilian Army agreed to end domestic arms manufacturer Taurus’ monopoly on providing small arms to police forces. Manufacturing defects were causing the weapons to fire without a trigger pull and jam while in use, leading to many deaths. A TIB investigation was the first detailed report on the issue and led to the story being picked up by other major outlets.

An official congressional inquiry was triggered by an exclusive feature in December which revealed that a tool the government had marketed as a means to protect indigenous land and environmental preserves was likely being using by the Brazilian equivalent of the CIA as a mega-database to surveil social movements, unions and other citizen organizations.

Last year, we published two articles exposing the fraud at the heart of a key Datafolha poll, published by Folha, that attempted to create the false appearance that a majority of Brazilians wanted Michel Temer as their president; the actual data showed that a large majority wanted him to resign. Our reporting on this – which became among our most-read articles for the Intercept itself — led to a scolding by Folha’s Public Editor of her own newspaper, and an acknowledgement from Datafolha that the data was presented deceitfully. 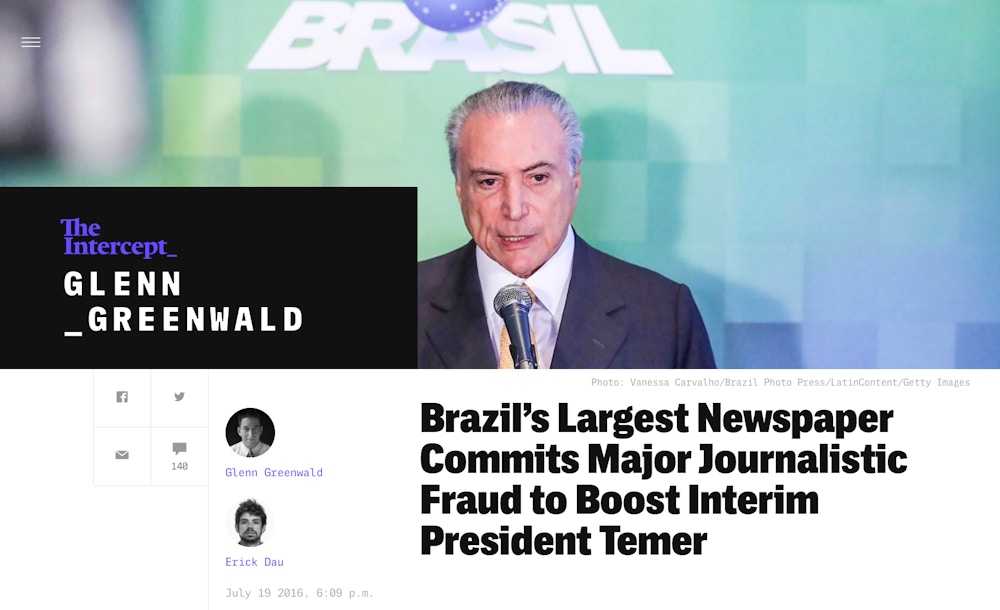 Our columnist Ana Maria Gonçalves was invited by The Martin E. Segal Theatre Center in New York City to develop and perform a monologue based on her article about cultural appropriation and the case of a white woman using African-style headscarves that went viral. Another writer, João Filho, covers the corruption and propaganda of the large Brazilian media in his weekly column, which regularly goes viral and sparks widespread discussions about media reform. And our analysis of Brazil’s most consequential news events — from Temer’s endless corruption problems and the nation’s general strikes to cruel austerity measures and Lula’s criminal conviction – provided a unique, alternative perspective that reverberated on news platforms throughout the world.

Our reporter Helena Borges’ reporting on education reform has been hard-hitting, and has produced ample results. Her investigation of right-wing billionaires’ attempts to push pro-privatization education reform through foundations went viral and the foundations lobbied us to kill or change the story but could not identify any errors. After she noted that the Education Ministry had cooked its stats to reduce the standardized test results of public schools (serving the government’s push to privatize education and cut spending), the Ministry was forced to walk back the stats and say they’d made a “mistake.” When they made a similar “mistake” months later, Helena was the first to cover it.

That is just a sampling of why we are so excited by the team of outstanding journalists we have assembled over the last year, and by the opportunities and reforms that can be created with well-supported, independent journalism. Not only are we more determined than ever to continue with the journalism we have been doing, but we are also devoted over the next year to aggressively expanding our team and our news coverage by seeking more funding, in a way that allows us to grow while maintaining our steadfast independence. We are working on securing new funding from organizations devoted to a free and independent press, as well as planning a reader-supported funding drive for later this year.

We are truly grateful to our growing, devoted readership for enabling our journalism to have the impact it has had. We can promise that the second year of our existence will be built on the same spirit of journalistic independence, dogged investigations, and service to our readership.

Most of all, we will continue to give voice to those communities and individuals who remain excluded by Brazil’s large corporate media, and do everything possible to shine a light on what the country’s most powerful forces are doing in the dark. To us, this type of accountability and transparency is the highest purpose of journalism, and the most potent agent for strengthening democracy.