Mnuchin has repeatedly denied that his former bank engaged in robosigning foreclosure documents. The evidence is overwhelming that it did. 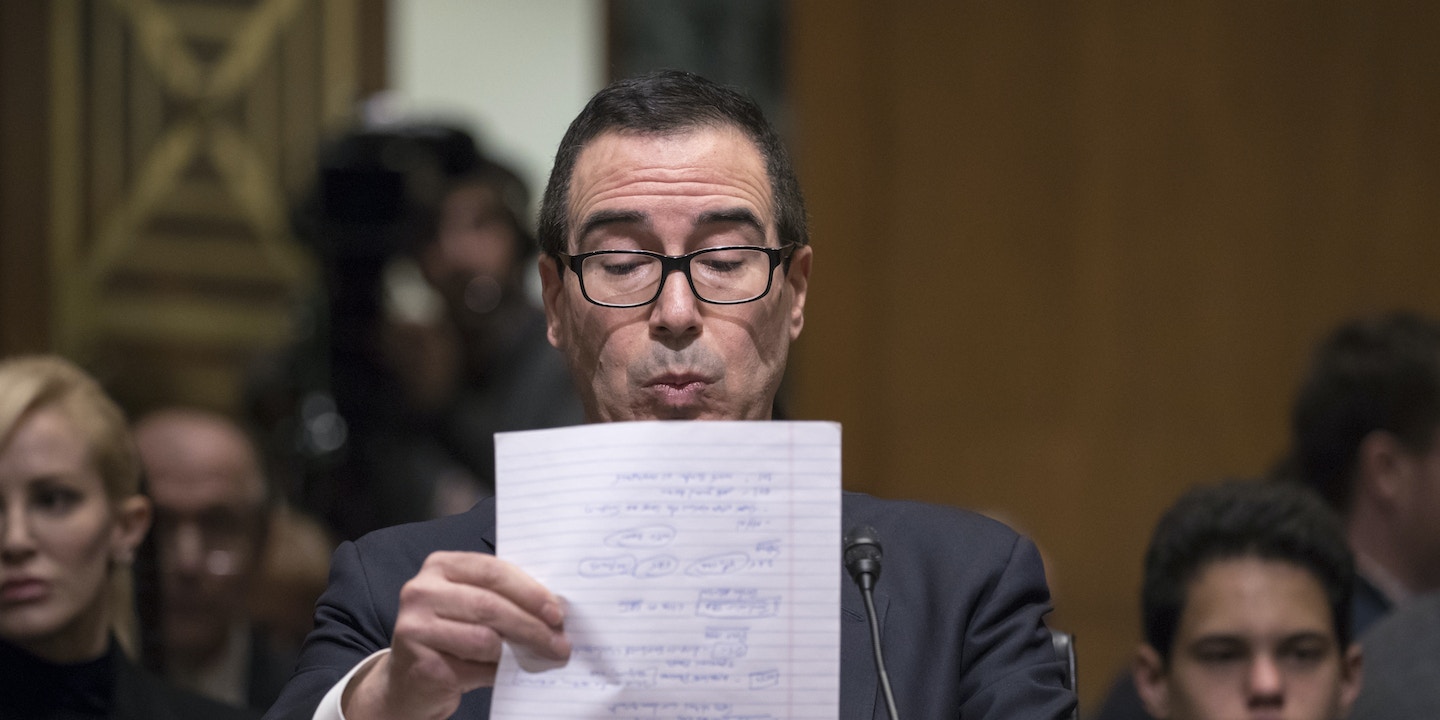 A watchdog organization has asked the Justice Department to investigate Treasury Secretary Steven Mnuchin for allegedly making repeated false statements to Congress about the conduct of OneWest Bank, where he served as CEO and later chair between 2009 and 2015.

In the letter, the Campaign for Accountability writes, “Even today, Americans have a right to expect that those who seek and hold top government positions will not lie to their elected representatives and that if they do, the consequences will be swift and severe.”

On three separate occasions, both in written testimony and in live hearings, Mnuchin has denied that OneWest engaged in robosigning of foreclosure documents, when copious evidence exists to the contrary. Most recently, Mnuchin appears to have lied about robosigning while under oath last week in testimony before the House Financial Services Committee.

Rep. Keith Ellison, D-Minn., confronted Mnuchin with the 2009 deposition of Erica Johnson-Seck, a OneWest vice president who admitted that her team of eight employees robosigned 6,000 affidavits a week attesting to verifying mortgage files while spending “not more than 30 seconds” reviewing the underlying material. Mnuchin replied defiantly, “I don’t think you know what robosigning is,” insisting there is no legal definition, and denied that there was any robosigning at OneWest, “for the record.”

Previously, in written answers for the record to Sen. Bob Casey, D-Pa., in January, in conjunction with his confirmation hearings, Mnuchin stated “OneWest did not ‘robo-sign’ documents,” and then when given a chance to clean up his answer, he maintained his denial. In fact, despite his claim last week that “robosigning is not a legal term,” Mnuchin provided such a definition to Casey, saying it referred to “(a) a signer of a foreclosure affidavit attested to facts that were not verified to be accurate; or (b) a signer of a foreclosure affidavit represented himself or herself to be someone else.”

Johnson-Seck admitted to both things. She attested to facts in foreclosure cases without verifying them in any way; in response to the question “Is it true that you don’t read each document before signing it,” she replied “That’s true.” She also represented herself as having the authority to sign documents for at least seven different financial institutions. In fact, the late Brooklyn judge Arthur Schack once threw out a OneWest foreclosure because Johnson-Seck had both assigned a mortgage to Deutsche Bank and executed an affidavit on behalf of Deutsche Bank, appearing as multiple officers in the same case.

In addition, the Columbus Dispatch found frequent instances of robosigning in Franklin County, Ohio, including three cases in 2010 where “a judge dismissed OneWest foreclosure proceedings specifically based on inaccurate robosignings.” A Reuters investigation in 2011 also alleged that OneWest issued “foreclosure documents of questionable validity.”

And a report assembled by the Florida attorney general’s office in 2010 includes a mortgage assignment signed by a representative of “IndyMac Bank,” OneWest’s predecessor, and dated July 2010, well after IndyMac closed down. The assignment was clearly “robosigned” by an employee claiming to work for IndyMac when it would have been impossible for them to do so.

None of this is surprising because it was the standard practice of every bank engaged in foreclosure operations at that time. For some reason, the campaign claims, Mnuchin doesn’t want to admit to a practice that most banks have acknowledged and paid billions of dollars in fines for.

“Sec. Mnuchin’s dissembling was shameful enough when he served as a CEO,” the Campaign for Accountability writes, “but once he began repeating this obvious untruth to Congress, Sec. Mnuchin crossed the line into potentially criminal conduct.” Indeed, it is a federal crime to commit perjury or make a “false or misleading statement” to Congress.

The Justice Department is, of course, highly unlikely to investigate Mnuchin’s statements. This is especially the case given the questionable assertions made to Congress by its leader, Attorney General Jeff Sessions, that he had not met with any representatives of Russia during the Trump campaign.

Nevertheless, the Campaign for Accountability raised the complaint because of the principle of the rule of law. In the letter they cite federal Judge Barrington Parker, who in 1977 fined CIA Director Richard Helms and gave him a suspended prison term for lying to Congress about CIA operations in Chile. “Public officials at every level, whatever their position, like any other person,” Judge Parker said, “must respect and honor the Constitution and the laws of the United States.”

Top photo: Treasury Secretary designate Steven Mnuchin goes over notes while testifying on Capitol Hill in Washington, on Thursday, Jan. 19, 2017, at his confirmation hearing before the Senate Finance Committee.