Sen. Orrin Hatch has done a 180 on monopoly politics. 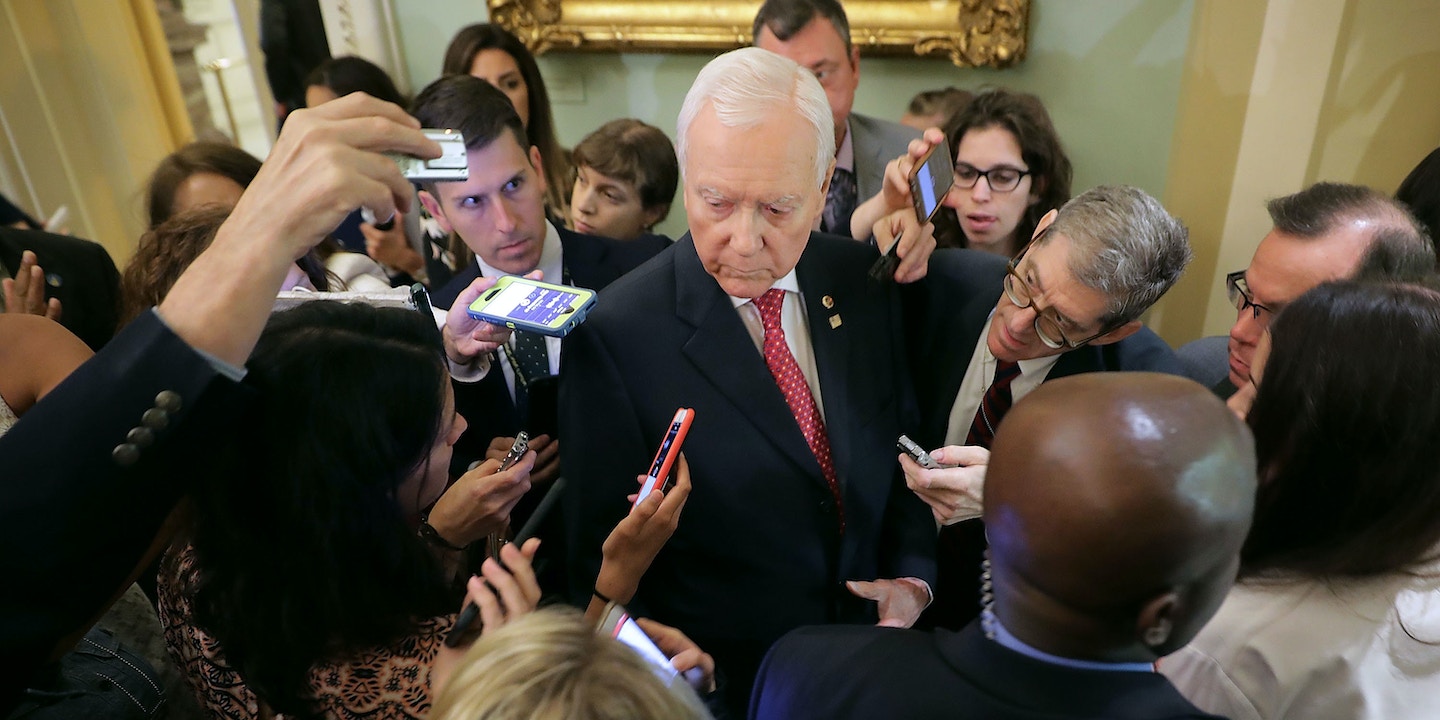 Before Congress checked out for the August recess, Sen. Orrin Hatch, R-Utah, made sure to use some of the waning moments to come to the defense of giant internet platforms, contradicting a long history of concern over the power of tech monopolies, a concern that lasted right up through last year.

In a Thursday speech, Hatch warned about the rise of “hipster antitrust,” a flailing attempt at a derisive term for a group of experts and observers who look uneasily at growing concentrations in every sector of our economy. These “hipsters” — for the sake of sanity, let’s just call them anti-monopolists or the New Brandeis movement — believe that antitrust officials in the Justice Department and Federal Trade Commission have, for the past 35 years, viewed the question of anti-competitive mergers and industries too narrowly, guided by something called the “consumer welfare” standard.

Initiated by failed Supreme Court nominee Robert Bork and associates at the University of Chicago, the consumer welfare standard maintains that, as long as merging companies make the case that prices will drop and “efficiencies” will occur due to their combination, the merger should go forward. Anti-monopolists, seeing how market concentration has affected not just prices but wages, suppliers, quality of service, regional inequality, economic dynamism, and democracy itself, believe the authorities must look at economic sectors with a much broader lens.

It’s an odd time for Hatch to have backed off what was once a lonely crusade, just as the wings of both parties are coming around to the issue. Anti-monopoly politics has gotten high-level buy-in from Democrats, who placed trust-busting at the head of their “Better Deal” agenda. Even “alt-right” populist Steve Bannon has told people privately he favors regulating Google and Facebook as public utilities, a disclosure that led to a rather combative segment on CNBC that my editor Ryan Grim insists I link to.

But on Thursday, Hatch called this idea “little more than pseudo-economic demagoguery and anti-corporate paranoia.” In a paean to self-regulation and the free market’s invisible hand, Hatch praised the consumer welfare standard as “an absolute boon to our economy and society” and lamented it being “besieged from the left.” While he admitted that “many markets are concentrating,” particularly in the tech sector, he said this was not a major concern, that markets concentrate and disperse, and everything balances out in the end.

Hatch added that the consumer welfare standard can easily adapt to meet particular challenges, such as the merger between Amazon and Whole Foods, or the question of Google’s anticompetitive conduct in search, which just drew a $2.7 billion fine from the European Union. Departing from that approach serves “the same old collectivist impulse that we’ve seen time and again.”

But while in the speech Hatch joked that “nobody would mistake me for a hipster,” on the issue of concentration in the tech sector, the Utah senator is actually the original cool kid.

Back in 1998, Hatch wrote a Wall Street Journal op-ed, titled “Beware High-Tech Monopolies,” expressing fears that “a positive ‘feedback cycle’ in high-tech markets often allows individual firms … to garner unusually large market shares.” He uses the example of Microsoft Windows’s popularity spurring more software developers to contour their programs for that platform, leading to more market share for the operating system with the best applications. The trend makes it much harder to switch operating systems than to switch shampoos, Hatch wrote, and dominance that reduces competition can lead to high prices, less innovation and fewer choices.

This is precisely the “network effects” dynamic that Hatch denigrated in his Thursday speech as “sleek new jargon” from academics used to attack the consumer welfare standard. Hatch keenly understood the danger of platform monopolies 19 years ago. In fact, he was one of the biggest proponents in Washington for breaking up Microsoft in the 1990s, and would give long speeches about “Antitrust in the Digital Age.”

And he continued to express his concern about it until very recently. In 2007, Hatch sharply questioned Google’s chief legal officer about the merger between Google and DoubleClick, which created a dominant online advertising provider. He also wrote to antitrust authorities opposing the deal, worrying about not only market dominance but consumer privacy.

Last year, in a Senate hearing with then-FTC Chair Edith Ramirez, Hatch cited a 2015 Wall Street Journal investigation showing that the FTC’s Bureau of Competition wanted to charge Google with illegally preferencing its own companies in search results, but the FTC’s senior leadership overrode the bureau and closed the case. He also highlighted a paper by Tim Wu, reading the line, “Google is degrading its search results at the expense of its users.” Hatch asked whether the FTC would re-open its Google investigation in light of these developments.

So why did Hatch, a longtime proponent of tough scrutiny of internet monopolies, back off? And how did Microsoft become the largest giver to Hatch’s campaign this cycle?

We reached out to the person from whom he borrowed the term “hipster antitrust,” George Mason University law professor Joshua Wright, to see if he had any insight into Hatch’s about-face. “I’ve not been in contact with Sen. Hatch or his office and am not advising them,” Wright said. “Seems like they follow antitrust issues, saw the hashtag, and decided to use it.”

In an impressive display, Wright has managed to bounce back and forth from the Google payroll to government service four different times in the past four years. As a law professor he received generous funding from Google for at least four different academic papers, all of which took Google’s side that they violate no antitrust laws. Wright became an FTC commissioner in 2013 and had to recuse himself from Google decisions for two years because of their funding of his research. After leaving the FTC in 2015, Wright became an “of counsel” at Wilson Sonsini Goodrich & Rosati, Google’s main outside law firm, which has represented Google before the FTC. Then in late 2016, Wright joined the Trump transition team, managing the FTC transition for the president-elect.

Wright is still of counsel with Google’s main outside law firm and back on the faculty at Antonin Scalia Law School (which had briefly been named the Antonin Scalia School of Law before internet mockery of its acronym forced a change).

Matt Whitlock, a spokesperson for Hatch, said that the office had been getting a number of inquiries about Hatch’s stance following the speech, which seemed to be a dramatic departure from his past antitrust crusade. But, said Whitlock, Hatch hasn’t truly changed. His full comment:

Sen. Hatch remains just as concerned today as he did in the 1990s about monopolization and other anticompetitive behavior, whether in the tech sector or elsewhere. The purpose of this speech was to defend the consumer welfare antitrust standard against calls to move to something else. “Network effects” is a good example. Network effects, as an economic concept, is very real and has been a part of competitive analysis for some time, including in the Microsoft case (as the prior editorial shows). But lately it’s been used in a sense completely untethered from traditional analysis, to suggest that the consumer welfare standard is no longer workable. That is why he said in the speech that concepts like network effects “do less to define new economic concepts than to explain how old economic concepts are manifesting themselves in modern markets. Through history, we’ve seen this time and time again. As the saying goes, the more things change, the more they stay the same.

The Google portion of the speech is another example. Sen. Hatch made clear that “nobody is suggesting that no enforcement is necessary,” and that “genuinely anticompetitive conduct must be stopped.” Again, in defense of the consumer welfare standard, he made clear that “[w]e must weigh the pro-competitive aspects of Google’s conduct with its anticompetitive potential. The ultimate inquiry should be whether consumers are better off as a result of Google’s actions.” He was critiquing the alternative approach, growing in popularity, which “instead of asking what lowers prices and increases quality — instead of considering actual proof of harm to consumers — [asks] what best serves the social goals in vogue at the moment.

Back in the 1990s, when Hatch was going after Microsoft, he told a technology industry conference, “If you want to get involved in business, you should get involved in politics.” The clear implication was that tech companies needed to increase lobbying and campaign contribution spending, to favor politicians who would subsequently favor their interests. In the wake of this shakedown, Microsoft started to spend more on K Street, and maxed out to Hatch’s re-election campaigns. The company opened an office in Utah in 2009.

Today, Google is spending more on lobbying than ever before, over $6 million in the past three months. And Hatch himself has been courting tech interests in 2017. He rolled out an agenda that would increase H1-B immigration visas, and meeting with key trade groups, such as The Software Alliance and the Internet Association (which counts Google, Amazon, and Facebook as members), along with Apple and old nemesis Microsoft. Hatch even spoke last month at the launch of a Utah affiliate of FWD.us, a national pro-immigration organization formed by tech billionaires Marc Zuckerberg and Bill Gates.

Sen. Hatch faces re-election in 2018, and despite being 83 years old, he intends to run.