The Madman With Nuclear Weapons is Donald Trump, Not Kim Jong-un

The dictator of North Korea is brutal but not crazy. The American president, however, has been described by mental health experts as paranoid and delusional.

For once, Donald Trump has a point. “We can’t let a madman with nuclear weapons let on the loose like that,” he told Philippines President Rodrigo Duterte, according to the transcript from their bizarre phone conversation that was leaked to The Intercept in May.

The madman the U.S. president was referring to, of course, was North Korean dictator Kim Jong-un. The madman the rest of us should be worried about, however, is Trump himself, who — lest we forget — has the sole, exclusive and unrestricted power to launch almost 1,000 nuclear warheads in a matter of minutes, should he so wish.

Most nonproliferation experts — as well as former President Jimmy Carter and a number of former Pentagon and State Department officials, both Republican and Democrat — agree that the brutal and murderous Kim, for all his bluster, is not irrational or suicidal, but bent on preserving his regime and preventing a U.S. attack. Nuclear weapons are a defensive, not an offensive, tool for the North Korean leadership — which, as Bill Clinton’s defense secretary William Perry observed on Fox News in April, may be “ruthless and … reckless” but “they are not crazy.”

Got that? Kim is bad, not mad.

The same cannot be said of The Donald. Think I’m being unfair? In February, a group of psychiatrists, psychologists and social workers wrote to the New York Times “that the grave emotional instability indicated by Mr. Trump’s speech and actions makes him incapable of serving safely as president.” In April, another group of mental health experts told a conference at Yale University’s School of Medicine that Trump was “paranoid” and “delusional” and referred to the president’s “dangerous mental illness.”

Is it any wonder then that so many recent reports suggest that South Koreans are more worried about Trump than they are about the threat posed by their hostile and paranoid neighbor? 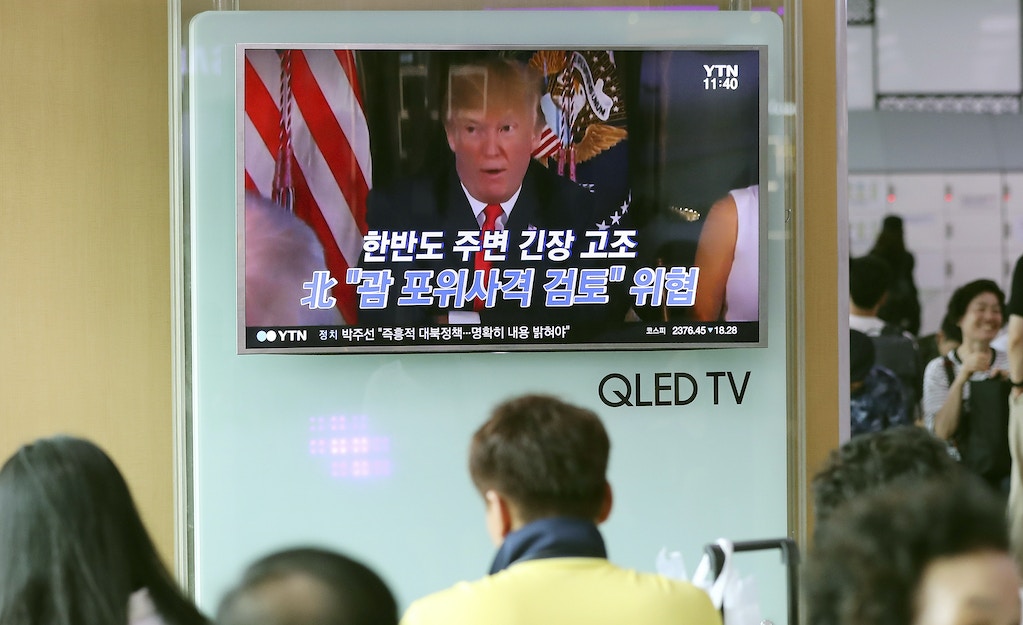 Consider Trump’s reaction this week to a confidential U.S. intelligence assessment — leaked to the Washington Post — that the DPRK is now able to construct a nuclear warhead small enough to fit inside its missiles. “North Korea best not make any more threats to the United States,” the president declaimed, in response to a reporter’s question at his Bedminster Golf Club on Tuesday. “They will be met with fire and fury like the world has never seen. He has been very threatening beyond a normal state. And as I said, they will be met with fire, fury and frankly power the likes of which this world has never seen before.”

How is this not an unhinged response from the so-called Leader of the Free World? In May, he said he would be “honored” to meet with Kim and praised him as a “pretty smart cookie.” In August, he took a break from his golfing vacation to casually threaten nuclear annihilation of Kim’s country (not even on the basis of any aggression by the DPRK, incidentally, but only their “threats”).

Does Trump understand the difference between escalating and de-escalating a nuclear crisis? Listen to Republican Senator John McCain, who has never met a “rogue nation” he did not want to bomb, invade or occupy. “I take exception to the president’s words,” McCain said on Tuesday, adding: “That kind of rhetoric, I’m not sure how it helps.”

I mean, just how crazy do you have to be to advocate a preemptive nuclear strike that even McCain cannot get behind?

Trump has form, though, when it comes to loose talk about nukes. During the presidential campaign, in August 2016, MSNBC host and ex-Republican congressman Joe Scarborough revealed that Trump, over the course of an hour-long briefing with a senior foreign policy adviser, had asked three times about the use of nuclear weapons. At one point during the meeting, according to Scarborough, the then-GOP presidential candidate asked his adviser, “If we had them, why can’t we use them?” 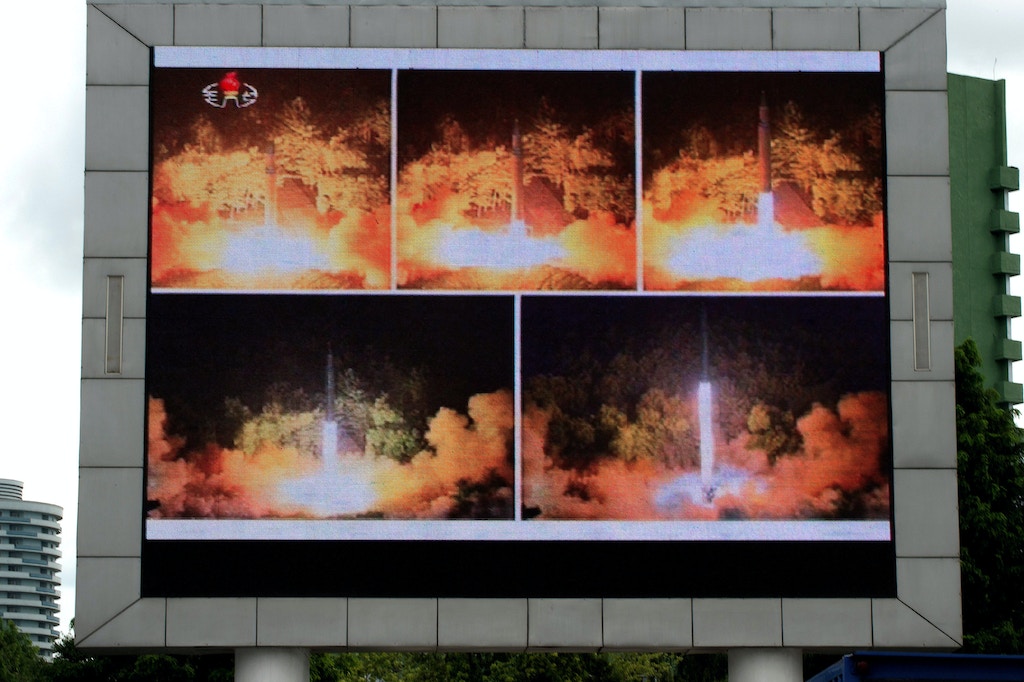 Coverage of an ICBM missile test is displayed on a screen in a public square in Pyongyang on July 29, 2017. Kim Jong-un boasted of North Korea’s ability to strike any target in the U.S. after an ICBM test that weapons experts said could even bring New York into range.

To be so blasé, enthusiastic even, about the deployment of the ultimate weapon of mass destruction is a stark indicator of Trump’s childishness, ignorance, belligerence, and, yes, derangement. Here is a president who is impulsive, erratic, unstable; whose entire life and career have been defined by a complete lack of empathy. Remember his strategy for defeating ISIS? “Bomb the shit out of ’em” and “take out their families.”

So do you think civilian casualties were on his mind when he issued his “fire and fury” warning? Come. Off. It.

Listen to McCain’s fellow Republican super-hawk Senator Lindsay Graham. “If there’s going to be a war to stop [Kim], it will be over there,” Graham told NBC’s Matt Lauer last week, recounting a recent conversation he had with the president. “If thousands die, they’re going to die over there. They’re not going to die over here — and he’s told me that to my face.”

“This is madness,” Kingston Reif, a nuclear disarmament specialist at the Arms Control Association, tweeted in response to Graham’s re-telling of Trump’s remarks. “Unhinged madness.”

Remember that 72 years ago today, the United States dropped the second atomic bomb on Japan, killing around 39,000 people in Nagasaki. Three days earlier, the first A-bomb killed around 66,000 people in Hiroshima. But a nuclear war on the Korean peninsula would make those strikes on Hiroshima and Nagasaki look like pinpricks. Experts say even a conventional war between the U.S. and the DPRK could kill more than 1 million people; a nuclear exchange, therefore, might result in tens of millions of casualties. Trump’s national security adviser, H.R. McMaster, has admitted that such a preemptive strike by the U.S. would be a “humanitarian catastrophe.”

Does the president care? Graham doesn’t seem to think so. Trump’s former ghostwriter Tony Schwartz, who spent 18 months in his company while working on The Art of the Deal, has called the president a “sociopath.” In fact, one quote more than any other stood out from Schwartz’s much-discussed interview with the New Yorker in July 2016 and, perhaps, should keep us all awake at night. “I genuinely believe that if Trump wins and gets the nuclear codes,” said Schwartz, “there is an excellent possibility it will lead to the end of civilization.”

We can’t say we weren’t warned.

Top photo: People wave banners and shout slogans as they attend a rally in support of North Korea’s stance against the U.S., on Kim Il-sung Square in Pyongyang on August 9, 2017.