Steve Bannon Said He Learned to Fear Muslims When He Visited Pakistan. Except He Was Probably in Hong Kong.

Steve Bannon claims he learned to see Islam as a threat after visiting Karachi in the Navy. Military records and sailors on his ship say he was not there. 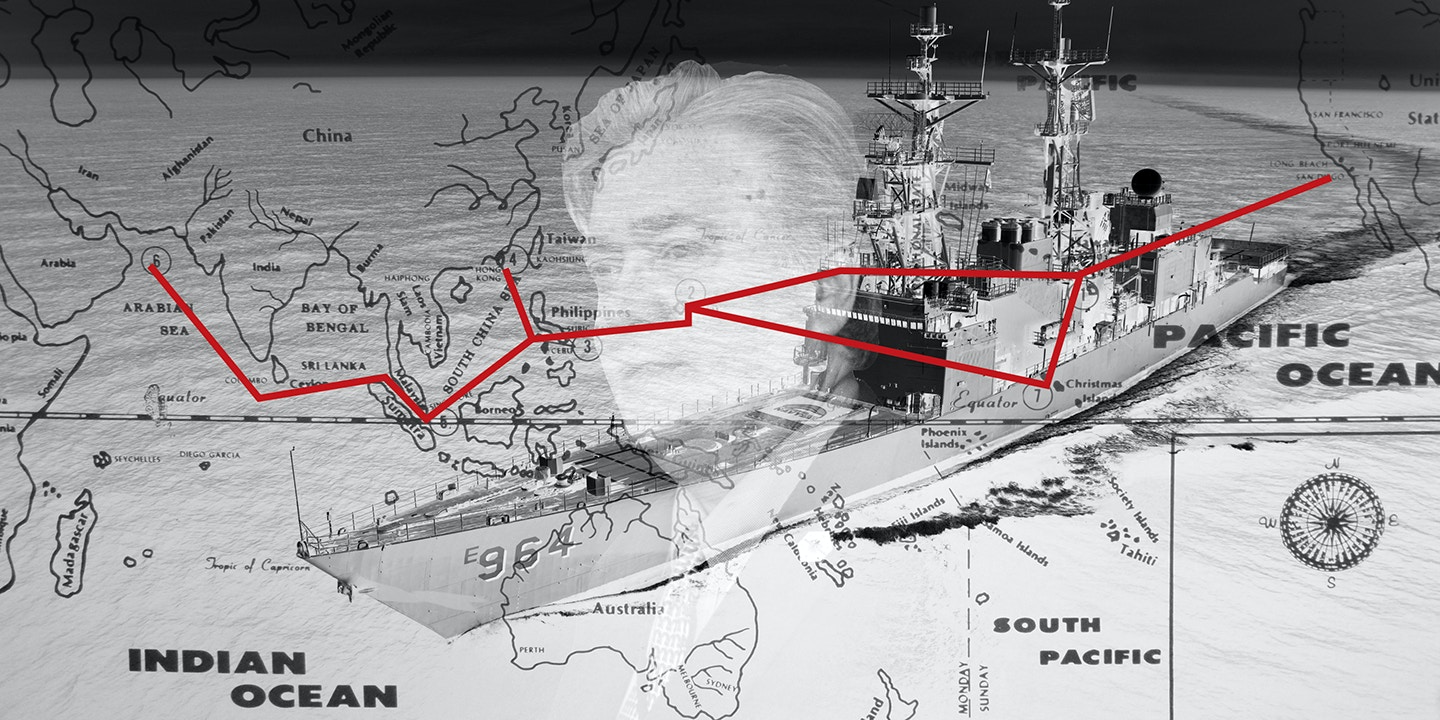 If you ask Steve Bannon how he got the idea that Muslims in the Middle East are a civilizational threat to America, he will say that his eyes were first opened when he served on a Navy destroyer in the Arabian Sea. At least that’s what he told the journalist Joshua Green, whose new book about President Donald Trump’s senior counselor is a best-seller. 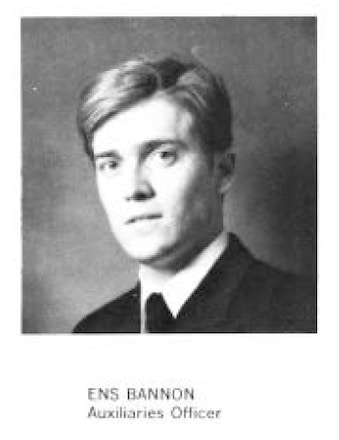 “It was not hard to see, as a junior officer, sitting there, that [the threat] was just going to be huge,” Bannon said. He went on:

We’d pull into a place like Karachi, Pakistan – this is 1979, and I’ll never forget it – the British guys came on board, because they still ran the port. The city had 10 million people at the time. We’d get out there, and 8 million of them had to be below the age of fifteen. It was an eye-opener. We’d been other places like the Philippines where there was mass poverty. But it was nothing like the Middle East. It was just a complete eye-opener. It was the other end of the earth.

That’s Bannon’s version. There are a few problems with it, however.

The port of Karachi was not run by the British in 1979. Karachi, which is the commercial hub of Pakistan, had a population that was well short of 10 million (it was about half that) and is not usually considered part of the Middle East. But the biggest problem is that the destroyer Bannon served on, the USS Paul F. Foster, never visited Karachi while Bannon was aboard. This map shows the path of the USS Paul F. Foster during its 1979-1980 deployment in the Pacific Ocean and Arabian Sea.

Six sailors who served on the Foster with Bannon told The Intercept that the vessel did not stop at Karachi during its 1979-1980 deployment. The recollections of these enlisted men and officers are supported by the ship’s deck logs, which show no stop on the way to the Arabian Sea and are available to the public at the National Archives. And a map of the Foster’s port calls that was published in its “cruisebook” shows stops in Hawaii, Guam, the Philippines, Christmas Island, Hong Kong, and Singapore — but not Karachi.

It turns out that Bannon, who has drawn a large amount of criticism for his exclusionary stances on race, religion, and immigration, has also inaccurately described his military service, simultaneously creating an erroneous narrative of how he came to an incendiary anti-Muslim worldview that helps shape White House policy.

It’s not clear whether Bannon’s account of visiting Karachi is an intentional fabrication or a false memory that reflects his subconscious fears, or something else entirely. Whatever the reason, it raises a lot of questions. Bannon did not respond to several inquiries from The Intercept. A close friend of Bannon’s who is in regular contact with him, and spoke on the condition of not being named, said Bannon had not read Green’s book and that the quotes attributed to him had not been checked with him. Green, the author, told The Intercept that the interview with Bannon occurred in 2015 and was recorded and transcribed.

The news of Bannon’s problematic narrative comes at a delicate time for the former executive chairman of Breitbart News, which under his leadership produced incessant streams of anti-immigrant and anti-Muslim stories. Bannon’s Navy service has always been deeply relevant to his work at the White House because it has been used as a reason for giving him influence on military affairs that his critics believe he does not merit. Bannon reportedly has a tense relationship with the retired generals who occupy key positions in the Trump administration – Chief of Staff John Kelly, Defense Secretary James Mattis, and particularly National Security Adviser H.R. McMaster. Earlier this month, the Washington Post reported that McMaster has been waging a campaign to cleanse the National Security Council of Bannon’s allies, and that the two men have argued about Afghanistan policy.

In January, when a controversial presidential order gave Bannon a full seat on the principals committee of the NSC, the White House cited his service in the Navy, where he was a junior officer for seven years with two deployments, first to the Pacific in 1978, the second to the Pacific and the Arabian Sea in 1979-1980. “He is a former naval officer,” said White House spokesman Sean Spicer at the time. “He’s got a tremendous understanding of the world and the geopolitical landscape. … Having the chief strategist for the president in those meetings who has a significant military background to help make — guide — what the president’s final analysis is going to be, is crucial.” In April, after being heavily criticized for putting Bannon on the NSC, Trump withdrew the full seat, though Bannon reportedly continues to attend meetings as a visitor. This photo from the 1970s shows fishing boats in Hong Kong, which unlike Karachi, the USS Paul F. Foster visited while Steve Bannon was aboard.

The falsehood about Karachi is not the only questionable statement Bannon made to Green about his military service. Bannon may have exaggerated his active-duty encounters with Iran. In the early months of 1980, Bannon was on board the Foster when, for about a month or less, it patrolled in the Gulf of Oman in the military run-up to the botched effort to rescue the American hostages who had been seized at the U.S. embassy in Tehran. A portion of Iran’s coastline is on the Gulf of Oman.

“The only way I can describe Iran,” Bannon told Green, “is that it looked like the moon. You’re literally months away from home, steaming across the ocean, these vast expanses, you get to this place and it was like you’d landed on the moon. It was like the fifth century – completely primeval.”

There are two apparent problems with Bannon’s description of Iran.

The first is that Iran in 1980 was anything but fifth-century primeval. Its per capita income was about $2,500, making it a mid-ranking country at the time, thanks to its oil reserves. Iran’s major cities were fairly well developed. Although it had large stretches of lightly populated territory and still does, Iran wasn’t the moon or even Mongolia. Lots of developed countries have large stretches of empty land — people tend to cluster in urban areas that occupy relatively little national territory.

But another potential problem with Bannon’s Iran story is that from the bridge of the Foster, where he served as a navigator, it would have been difficult at most times to see Iran with any clarity, according to several officers who served on the ship. The Foster cruised in international waters as an escort to the USS Nimitz aircraft carrier, usually at least a dozen miles away from Iran, the officers said, and that was too far away to see anything with ordinary binoculars.

The Foster was equipped with what’s known as “Big Eyes” on the signals deck above the bridge — high-powered binoculars that are so big they are physically mounted on a ship, usually on a tripod. It was not part of a navigator’s job to use the Big Eyes, according to the officers, but even if a navigator ascended to the signals deck to take a leisurely look, not much could be seen from such a distance.

Bannon’s own narrative about how he came to fear Muslims is politically important. He is one of the most openly anti-Muslim officials in Trump’s chaotic entourage and is reported to have overseen the drafting of the controversial Muslim travel bans that Trump issued in his first weeks in office. The fact that a key part of Bannon’s narrative is invented would seem to suggest that his anti-Muslim views come from a different place that is perhaps darker than what he is comfortable sharing with the public.

In fact, there is an embarrassing hint, in what Bannon told Green, that he wittingly or unwittingly transferred to Karachi a crowded scene he had witnessed in an entirely different port while he served on the Foster: Hong Kong. Bannon told Green that he vividly recalled how “the British guys came on board, because they still ran the port” — which wasn’t true for Karachi at the time but was true for Hong Kong, which was under British rule when Bannon visited it.

According to two officers who spoke to The Intercept, it was ordinary during port visits to Hong Kong for a British official, or several of them, to come aboard to inform the ship of the logistics of the port, or as a social courtesy. As an above-deck officer, Bannon would have been in the areas where the visiting British officials were welcomed, and probably would have seen them.

If this is the case, Bannon’s narrative of seeing a vast Muslim crowd in the Middle East and sensing the threat these people and their religion would pose to America falls apart in a different and perhaps more embarrassing way than sheer fabrication. The crowds he would have seen in Hong Kong — which, according to crew members I talked with, was indeed overflowing with Chinese at the time, many of them quite poor — were overwhelmingly not Muslim (only a small number of Chinese are Muslim), and certainly not Middle Eastern.

It seems possible that Bannon may have consciously or subconsciously transposed the non-Muslim crowd he saw in Hong Kong and turned it into a Muslim crowd he did not see in Karachi. This raises the question of whether Bannon’s underlying anxiety arises less from a threat purportedly presented by Muslims and more from a general anxiety about non-white foreigners, whether Muslim or Buddhist or any religion.