After purging Iran hawks from the NSC, Gen. H.R. McMaster is coming under fire from right-wing pro-Israel forces backed by Trump’s top donors. President Donald Trump’s White House is being put in the awkward position of having to choose sides between major donors and its own senior staffers. On Wednesday night, a right-wing, pro-Israel lobby group funded largely by the Adelson family — which also gave millions to Trump’s presidential campaign and inauguration — launched a broadside attack against National Security Adviser Lt. Gen. H. R. McMaster.

The Zionist Organization of America announced Monday that it was undertaking a review of McMaster’s record on Israel, according to an “exclusive” story in the right-wing website, Breitbart. On Wednesday, the group released a statement calling for McMaster to be reassigned from the National Security Council because, according to the ZOA, he “purged from the NSC those officials who were carrying out President Trump’s policies of combating Iranian and radical Islamist transnational threats.”

“Gen. McMaster’s record during these past few months can only lead to the conclusion that McMaster is opposed to President Trump’s basic policy positions on Israel, Iran, and Islamist terror,” ZOA president Morton Klein said in the statement. “Gen. McMaster is not the appropriate person to serve the Trump White House as top national security adviser. The ZOA strongly recommends that Gen. McMaster be reassigned to a different role in this administration, unrelated to these critical issues.”

The White House has shown a willingness to act — and act fast — to stay in Republican mega-donor Sheldon Adelson’s good graces. When then-press secretary Sean Spicer went on a bizarre rant declaring Syrian dictator Bashar al-Assad to be worse than Adolf Hitler, for instance, Spicer picked up the phone afterward and personally called Adelson to apologize. But the latest rift with an Adelson-backed group appears to be more severe and will likely take more than a simple phone apology to resolve.

Breitbart, which first reported the inquiry and its results, is also linked to a top Trump donor — Robert Mercer invested at least $10 million in the site — as well as Steve Bannon, Trump’s former campaign chair and now one of his top political strategists. Bannon, who once ran Breitbart, leads a “nationalist” faction in the White House that clashes frequently with what these “nationalists” have deemed “globalist” forces in the halls of power — those, such as McMaster and others, who are willing to engage in international diplomacy and trade.

The ZOA’s attack on McMaster pits Adelson and Mercer, two extreme right-wing Trump backers, against Trump’s new chief of staff, retired Gen. John Kelly, who is widely seen as bringing some discipline and order to a White House that constantly finds itself in chaos. Kelly is said to be closely allied with McMaster.

In its statement, the ZOA pointed to McMaster’s personnel changes at the NSC. “Gen. McMaster has appointed officials who are holdovers from the Obama administration, who favor the Iran nuclear deal and are hostile to Israel — officials who are diametrically opposed to President Trump’s policies,” the statement said.

McMaster had long opposed the appointment of a trio of anti-Muslim ideologues to the NSC staff, but his bid to remove the staffers was thwarted until Kelly was elevated last month from running the Department of Homeland Security to chief of staff. Two of the staffers, Ezra Cohen-Watnick and Derek Harvey, were reportedly the most outspoken Iran hawks within the NSC.

Adelson, for his part, has been a consistent backer of hawkish groups on Iran, once even remarking that he would like to launch nuclear weapons against the Islamic Republic.

McMaster’s controversial statements, according to the ZOA, were reported by the Jerusalem Posts’ Caroline Glick. “According to senior officials aware of his behavior, [McMaster] constantly refers to Israel as the occupying power and insists falsely and constantly that a country named Palestine existed where Israel is located until 1948 when it was destroyed by the Jews,” Glick, another far-right, pro-Israel figure, had written on Facebook.

The ZOA statement cited Glick’s statements, as well as a litany of article from frequently Islamophobic websites, such Frontpage Mag, in its condemnation of McMaster’s personnel changes. Neither the White House nor the ZOA responded to requests for comment. 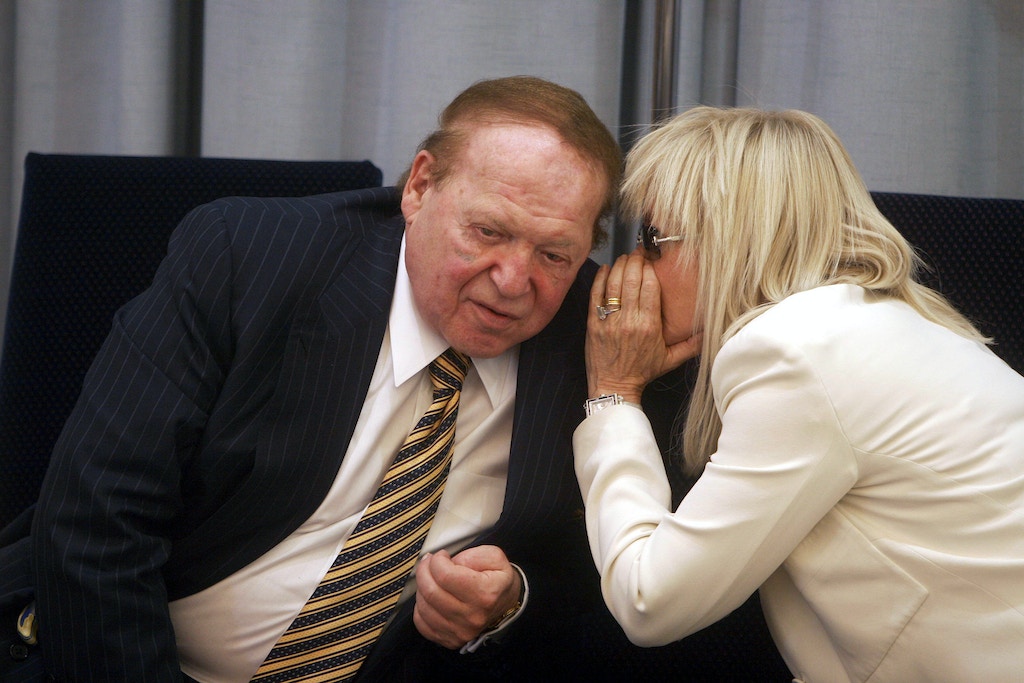 Philanthropist Sheldon Adelson and his wife Miriam Adelson attend a ceremony in the President’s Residence on Aug. 12, 2007, in Jerusalem, Israel.

The extent of the ZOA’s reliance on funding from Adelson, who is also Trump’s biggest donor, has remained largely shrouded in secrecy. Breitbart acknowledged that the ZOA receives some backing from the Adelsons. And I have previously reported on the Adelsons’ extensive support of the ZOA. Documents obtained by The Intercept, however, detail the degree to which ZOA has remained dependent on the fortune Adelson built from his gambling empire.

The ZOA’s 2015 Schedule A form, which is filed with the IRS but not intended for public disclosure, shows that Miriam Adelson, Sheldon wife, contributed $4,533,870 to the group in a period spanning the 2011 to 2015 tax years. The group’s second-largest donor over the same period was the MZ Foundation, which contributed less than $1 million. According to the ZOA’s 2015 Schedule B form, which is also not intended for public disclosure, Miriam Adelson contributed $1 million to the group during the 2015 tax year alone, more than twice as much as the next largest contributor.

The ZOA has emerged as one of the few defenders within the Jewish community of Trump’s White House and its “alt-right” members when they have faced charges of anti-Semitism. The group even invited Bannon, a seminal figure of the “alt-right,” to its annual dinner in November. Other Jewish groups and self-proclaimed anti-Semitism watchdogs have taken a hard line against Bannon’s appointment in the White House; the Anti-Defamation League declared Bannon’s work at Breitbart “hostile to core American values.” Ultimately, Bannon did not attend.

The ZOA has made a point to fete the Adelsons and even speak on their behalf. In 2009, the group awarded Sheldon Adelson the “Herzl Gold Medallion for outstanding achievement in Zionism.” And, in 2014, Klein acted as Adelson’s spokesperson after New Jersey governor and then-GOP presidential hopeful Chris Christie made the gaffe of referring to the West Bank as “occupied territories.” Christie personally apologized to Adelson.

In 2015, the ZOA also came out to defend Mike Huckabee — whose daughter, Sarah Huckabee Sanders, serves as Trump’s press secretary — against an avalanche of denunciations from Jewish groups, who condemned his statement comparing the Iran nuclear agreement to the Holocaust. Huckabee had said that then-President Barack Obama would “take the Israelis and march them to doors of the oven.”

The Adelsons gave $35 million the Future 45 Super PAC to support Trump’s candidacy, enough to make the Adelsons Trump’s biggest campaign supporter. The influx of Adelson’s money corresponded to a noticeable change in tone by then-candidate Trump.

Top photo: A pro-Israel demonstrator, wearing a military style kipa and holding a U.S. flag, attends a demonstration outside the U.S. Capitol in Washington.