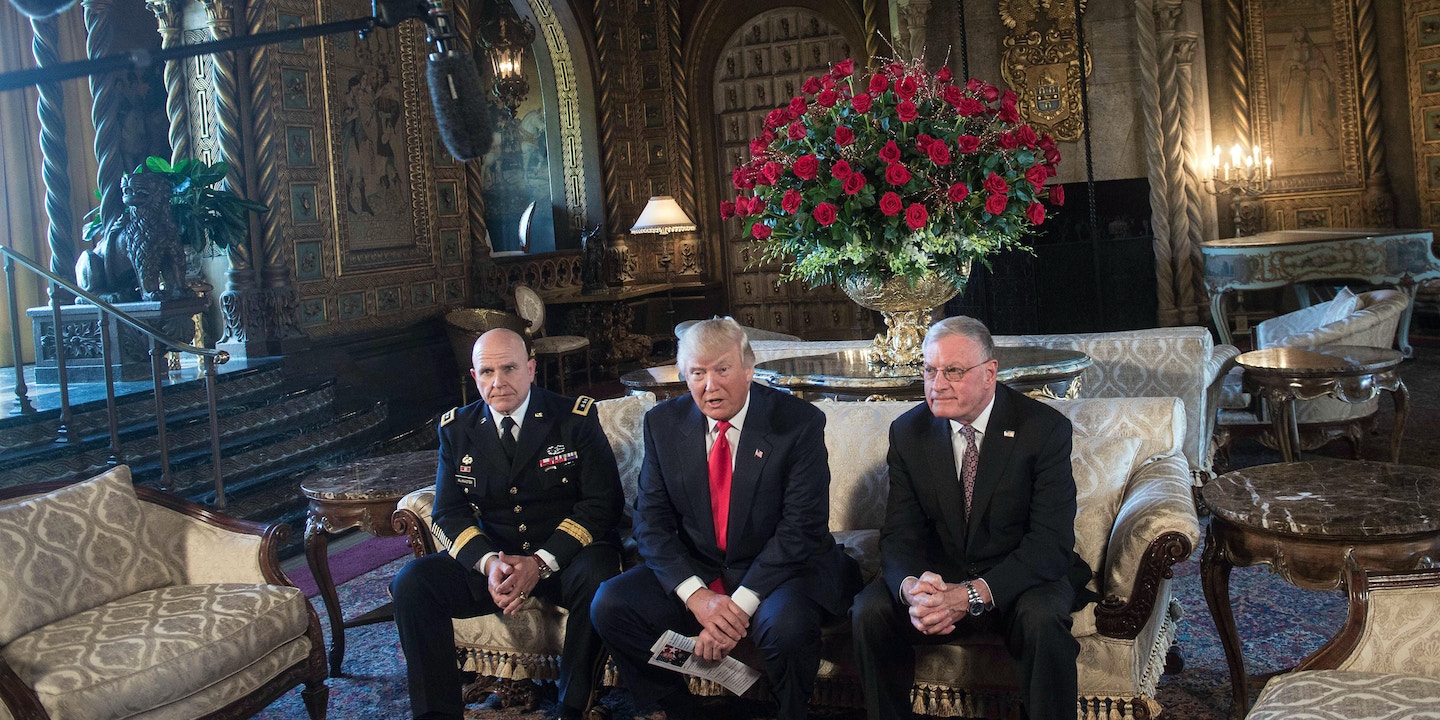 Unlike his short-lived predecessor, Lt. Gen. Michael Flynn, President Trump’s new national security adviser, Lt. Gen. H.R. McMaster, has no history of openly associating with bigotry. In fact, McMaster has throughout his career emphasized the need to work constructively with foreign Muslim populations.

But his presence only calls more attention to the dramatic divide among Trump’s top foreign policy advisers. On one side are career military personnel who understand that antagonizing Muslims is both offensive to American values and damaging to the country’s security. On the other side are inexperienced, radical ethno-nationalists who shrug off international norms and believe that peaceful coexistence with the world’s Muslims is unlikely and undesirable.

The two views appear incompatible. But which group will emerge victorious is not at all clear. In fact, which group speaks for Trump at any given moment is not entirely clear either.

Here are the key players: U.S. Army Lt. Gen. H.R. McMaster looks on as President Donald Trump announces him as his national security adviser at his Mar-a-Lago resort in Palm Beach, Fla., on Feb. 20, 2017.

H.R. McMaster, Trump’s new national security adviser, is a three-star general, a PhD in history, and the author of a book on the high-level deceptions and errors that triggered the U.S. war in Vietnam.

A seemingly incongruous partner for Trump, who has repeatedly advocated for torture and other harsh measures to fight terrorism, McMaster has been a vocal proponent of protecting civilians in war zones and avoiding the “clash of civilizations” approach favored by Trump and his top advisers.

He presents a dramatic contrast to Flynn, who once tweeted that “fear of Muslims is RATIONAL” and during his brief tenure put Iran “on notice” in a threatening press conference that signaled the possibility of armed conflict with that country.

In a speech at the Carnegie Council in 2014, McMaster said that the United States must partner with people in Muslim-majority countries to defeat groups like the Islamic State, describing them as “the people who are suffering the most” from terrorism. McMaster added that to win such conflicts,U.S. forces must understand the history and social dynamics of the countries it is fighting in, as well as have “empathy for the people among whom these wars are fought.”

McMaster has also criticized agenda-driven D.C. think tanks and foreign policy seemingly driven by the weapons industry. In a 2015 speech at the University of South Florida, McMaster said that “the military-industrial complex may represent a greater threat to us than at any time in history.”

Secretary of Defense Jim Mattis has been the anchor of the nonradical wing of the Trump administration. Mattis assured reporters during his recent meeting with Iraqi political and military leaders that, Trump’s frequent comments to the contrary, the United States would not try to seize Iraq’s oil. “I think all of us here in this room, all of us in America, have generally paid for our gas and oil all along, and I’m sure that we will continue to do that in the future,” he said. “We’re not in Iraq to seize anybody’s oil.”

As the commander of the 1st Marine Division in Iraq, Mattis believed that treating Iraqis with respect was essential to American security. He investigated abuses of prisoners in Iraq and helped stop the use of torture at one prison where an Iraqi in U.S. detention had died after being beaten.

On the campaign trail, Trump advocated for the return of waterboarding. A short meeting with Mattis during the transition period in November had Trump reconsidering his stance. The president-elect told reporters that he asked Mattis about waterboarding, and Mattis replied that he “never found it to be useful.” Instead, Mattis told Trump: “I’ve always found, give me a pack of cigarettes and a couple of beers and I do better with that than I do with torture.” Trump told reporters in January that he would defer to Mattis on the issue from now on.

Unlike some in Trump’s inner circle, Mattis believes that Israel’s continued military occupation of the Palestinians threatens American security and could lead to an apartheid-style situation. Asked about conflict with Iran during a 2016 interview, he replied, “It would be bloody awful, it would be a catastrophe if we have to have another war in the Middle East like that.” White House Chief Strategist Steve Bannon attends a meeting of Senate and House legislators in the Roosevelt Room at the White House, Feb. 2, 2017, in Washington.

White House Chief Strategist Steve Bannon — the former Breitbart News executive who helmed the latter half of Trump’s campaign — is an outsized figure in the president’s kitchen cabinet. He’s also a true believer in the idea that the United States cannot coexist with Islam.

“Islam is not a religion of peace. Islam is a religion of submission. Islam means submission,” Bannon proclaimed during a 2010 interview. It is a view he sought to establish in a documentary he once pitched titled “Islamic States of America.” In that film, he imagined a future United States where all the major institutions of society were ominously controlled by Muslims.

Sebastian Gorka reports to Bannon and has emerged as one of the chief White House ideologues pushing for the United States to take a more forceful stance on Islam. A former instructor at the U.S. military’s Joint Special Operations University and editor at Breitbart News, Gorka has come under criticism from national security experts for his claims about Islam and terrorism.

His 2016 book, “Defeating Jihad: The Winnable War,” called for the United States to confront the “global jihadi movement, a modern totalitarian ideology rooted in the doctrines and martial history of Islam.” He is also an associate of notorious anti-Muslim conspiracist Frank Gaffney, frequently appearing as a guest at Gaffney’s events and on his radio show. In a recent NPR appearance, Gorka refused to confirm whether Trump even considered Islam to be a religion but did say that terrorists groups have “a religious verbiage, their justification for violence is always religious.”

Senior Adviser Stephen Miller belongs to a new generation of far-right activists who argue that Western civilization is under attack by uncontrolled immigration and the spread of radical Islam. As a college activist at Duke University, he put together events to promote a “Terrorism Awareness Project” aimed at exposing the threat of “Islamofascism” — a term created by far-right activist David Horowitz, who is notorious for, among other things, associating Arab American students engaged in pro-Palestine activism with terrorism.

“Gripped by complacency and the omnipresent force of political correctness, our nation has failed to educate our youth about the holy war being waged against us and what needs to be done to defeat the Jihadists that are waging this war,” Miller wrote in a blog post at the time. “American kids attend school in an educational system corrupted by the hard left. In this upside-down world, America is the villain and Jihadists the victims of our foreign policy. Instead of opening eyes, we are fastening blindfolds.”

As a Trump surrogate, he often made hysterical and baseless claims about Muslim immigration, at one point saying that “half a million U.S. girls in this country are at risk of female genital mutilation” as a result of Muslim immigration to the United States.

CIA Director Mike Pompeo was until recently a Republican congressman from Kansas partial to defending CIA officials who engaged in torture, calling them “patriots.” He also left the door open to the CIA’s return to torture by acknowledging in his written responses to the Senate Intelligence Committee that he would be open to altering a 2015 law prohibiting the government from using techniques not listed in the Army Field Manual.

As a lawmaker, he repeatedly appeared on the radio program hosted by anti-Muslim activist Frank Gaffney, where he portrayed the war on terror as a conflict between Islam and Christianity. He has also claimed that “Islamic leaders across America [are] potentially complicit” in terrorism because they supposedly don’t speak out against it, which is not true.

Pompeo tapped as his deputy director at the agency CIA staffer Gina Haspel, who ran a secret prison in Thailand as part of a network of “black sites” that enabled the agency to torture detainees.

Senior Adviser Jared Kushner, Trump’s son-in-law, has no formal military or diplomatic experience. Yet the 36-year-old senior adviser is “running point on the Israel stuff,” as one senior Trump administration staffer told Politico.

Resolving the Israeli-Palestinian conflict is seen as critical to reducing antipathy between the United States and Muslim-majority societies. As even the Bush-era Pentagon admitted, our “one sided support in favor of Israel” helps fuel radicalism that terrorists use to recruit against the United States.

The global consensus — which, until the Trump administration, included the United States — is that the peace cannot be achieved without establishing a sovereign Palestinian state. Trump recently put an end to the longstanding U.S. insistence on a two-state solution, reportedly keeping his own State Department in the dark on the decision until it was made. It was Kushner’s counsel — not that of senior U.S. diplomats or military staff — that was guiding him.

Trump has told the media on numerous occasions that he will task Kushner with brokering a peace deal. But Kushner is hardly impartial in the conflict.

While U.S. policy has held for decades that settlements built deep into Palestinian territories are illegal, Kushner’s family has helped finance them. And he fired a staffer at the New York Observer, which he owned at the time, after the staffer began to write critically about the Israeli occupation of the West Bank.