Donald Trump is threatening to withhold grants from local police if California becomes a “sanctuary state” — but some immigration advocates oppose the grants altogether. 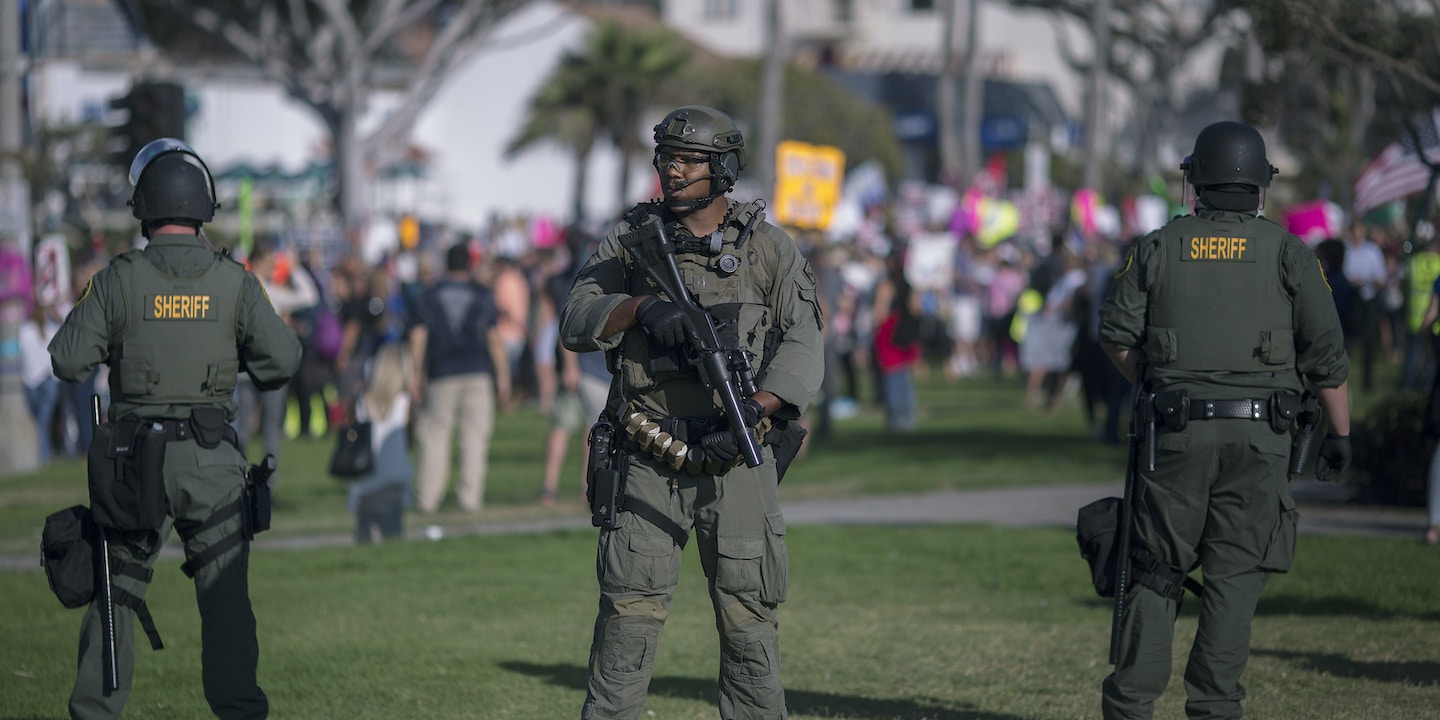 A bruising fight over federal police funding is taking center stage in the battle over whether California will become the nation’s first “sanctuary state.”

The California legislature is poised to enact Senate Bill 54, a state proposal that is the strongest legislative effort yet to enshrine sanctuary protection in the state by curbing local law enforcement cooperation with federal immigration officials. But the Trump administration has threatened that if California passes the act, the state will be cut off from a range of law enforcement grant money.

California Democrats, meanwhile, have declared that any move to cut off the spigot of federal policing funds is an attempt at blackmailing the state, and are promising to fight for every dollar.

Lost in the conversation, however, is a question few have raised, let alone answered: Is the federal money necessary for public safety?

Take, for instance, the State Criminal Alien Assistance Program, which is one of the programs California risks losing access to if the sanctuary state bill is passed into law. An initiative of the 1994 omnibus crime law, former President Bill Clinton said the program would address “years of virtual neglect of the illegal immigration issue.”

SCAAP provides reimbursements to local jails. The money allows municipalities to partially bill the federal government when detaining immigrants — specifically those in the country without legal authorization, who have been previously convicted of at least one felony or two misdemeanors. In exchange, local authorities must inform Immigration and Custom Enforcement officials of potentially removable individuals. The funds cover pre-trial and post-conviction costs of detention for state-level offenses, unrelated to federal immigration charges.

While the program, which dispersed over $50 million to California county sheriffs in the 2016 fiscal year, the most of any state, has been portrayed as a necessary program for law enforcement, some experts are skeptical. Angela Chan, an attorney and policy director with Asian Americans Advancing Justice – Asian Law Caucus, said that the stream of money to county sheriffs meant that state law enforcement was effectively profiteering from ICE.

“The feds aren’t reimbursing them for anything the sheriffs aren’t already spending money on, like the salaries of the jail deputies,” Chan said. “They’re making money off ICE, and it’s unconscionable, really.”

In other words, the program encourages local law enforcement to arrest and detain immigrants without legal authorization to be in the country. The federal government will only provide reimbursements — which become de facto extra funding — only for detaining those people. 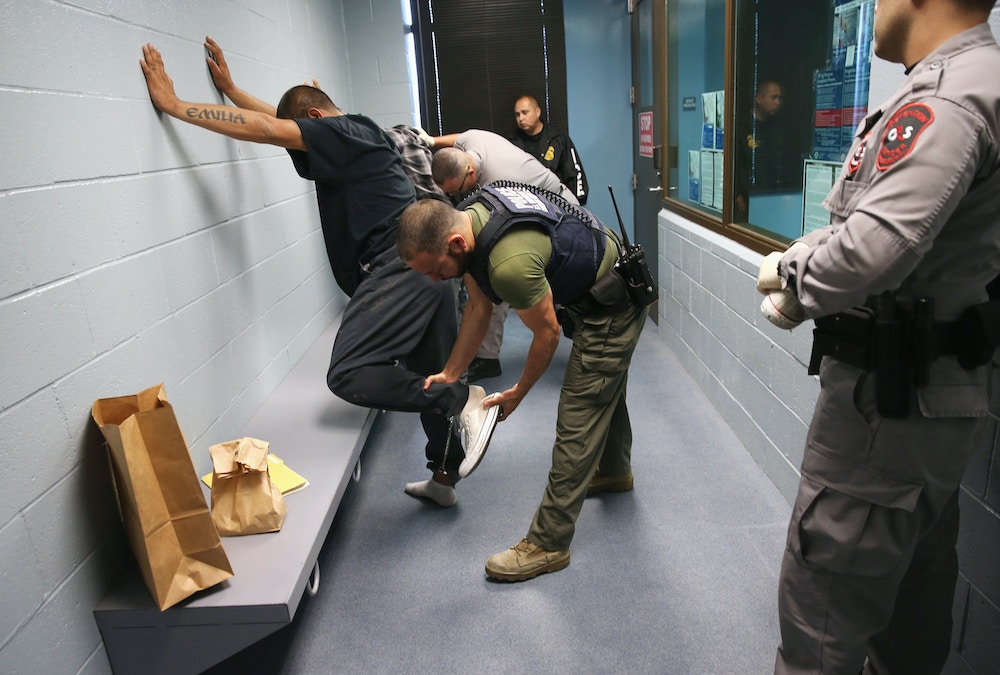 Immigration and Customs Enforcement agents frisk a detained immigrant at a processing center in Camarillo, California on Oct. 14, 2015.

“What that means is that if I’m a law enforcement agency and I run a jail and have to fund that jail, the federal government will pay me if I arrest an undocumented immigrant for a felony, but not a citizen,” said Lena Graber, a staff attorney with the Immigrant Legal Resource Center. “So the incentives are really disgusting.”

A 2012 California state auditor report found nearly 2,000 faulty alien records submitted through SCAAP, in addition to several attempts to bill the government for the detention of legal permanent residents. In New Jersey, as part of an effort to seek reimbursement funds under the program, correctional officers in Morris County waived Miranda rights and forced individuals under detention to disclose their immigration status or face solitary confinement.

Who Gets The Most Money From The Feds?

Many California sheriffs oppose SB 54, which they claim is dangerous because it might hinder their ability to remove violent offenders who don’t have authorization to be in the country. Some of the sheriffs, however, also concede that their advocacy is motivated by money.

Kings County Sheriff Dave Robinson has called attention to SCAAP funding when speaking to local media about his opposition to the sanctuary state legislation. So has Orange County Sheriff Sandra Hutchens, who made the potential loss of SCAAP money a major talking point as she lobbied state officials against enacting SB 54. “This program provides significant funding that helps my department and others across California mitigate the impact of undocumented offenders,” Hutchens wrote.

That local governments have come to count on federal immigration cash is evident in how how counties across the state have ramped up the fight to maintain the funds. Disclosures show that at least 11 California county governments retained D.C. lobbyists to continue the flow of SCAAP money. Even the California Senate, which has led the fight for sanctuary state legislation, has retained federal lobbyists to work on keeping SCAAP for the state.

Other law enforcement grant programs have also been raised in public discourse over sanctuary city policies. The Edward Byrne Memorial Justice Assistance Grant Program, known as the JAG grant, is another major federal grant program at stake over the sanctuary state law.

Yet again, lost in the media coverage of the back and forth, is the long history of JAG grants in fueling drug war policies and mass incarceration, just the sort of policy outcomes decried across the ideological spectrum.

The program broadly funds a range of criminal justice work, including corrections, treatment, and victim programs — but the majority of funding has historically gone to traditional law enforcement programs, some of which are associated with aggressive policing tactics.

This funding, critics say, creates another layer of financial incentives for maintaining the size and scope of heavy-handed policing.

The JAG program has been assailed as counterproductive in recent years from a broad array of advocacy organizations, including the Brennan Center for Justice on the left, and the Texas Public Policy Foundation on the right.

The courts may end up blocking the Trump administration from making good on its threats to revoke federal funding, irrespective of whether SB 54 passes. But to legislators mulling the proposal — the bill passed the state Senate in April and is now under consideration in the California Assembly — the federal funding remains for the moment a factor.

Factoring in a notoriously unpredictable administration has created another wrinkle in the debate. While Sessions dangles the potential loss of SCAAP and JAG funds to pressure California, the administration budget slashes many of the law enforcement programs, including JAG, and calls for eliminating SCAAP entirely.

If the law enforcement grants are continued by Congress, then pulled from California to punish the state over sanctuary protections, could that still be considered a victory for immigration and criminal justice reform advocates?

“We’re in this funny position,” said Graber, the Immigrant Legal Resource Center attorney. “A lot of those federal law enforcement grants typically fund aggressive policing that we do not support, that fuel mass incarceration, and they need review.” But at the same time, Graber explained that “we don’t like the idea they would just take these grants away from cities that are trying to do the right thing and protect their residents.”