The Boston police, who have a reputation for poor relations with black residents, responded with violence against antiracist demonstrators. “It’s unbelievable that this many police officers came here to protect them,” Ashley Lloyd said. “They’re not protecting us.”

Lloyd, a Boston resident, expressed her frustration with the police after officers clashed with antiracist demonstrators over the weekend. A “free speech” rally in the city — which was tied to the “alt-right,” a conservative faction that espouses far-right ideologies grounded in white supremacy — turned out what police estimated to be between 50 and 75 people. Lloyd was among the estimated 40,000 counterprotesters who showed up. The numbers were overwhelmingly in favor of the antiracist demonstrations, but as the day progressed, counterprotesters still had reason to question if their city — and, in particular, its institutions — was behind them or the right-wing demonstrators.

As the far-right rally came to a close, however, the attendees needed to exit the city’s downtown area, which was swamped with antiracist demonstrators. The result was a tense face-off between some mostly peaceful counter-demonstrators and Boston Police Department officers in full riot gear on Boylston Street, where sporadic scuffles broke out. Set against the backdrop of racial tensions in Boston between law enforcement and people of color, some of the counterprotesters wondered whose side the police were on.

The BPD has a long-held reputation as a racially intolerant public institution. The American Civil Liberties Union of Massachusetts found, in a study first published in October 2014, that the department stops black citizens disproportionately. The commonwealth’s Supreme Judicial Court cited that report when it ruled in September 2016 that black men running from Boston police have a right to do so and that the action of flight is not suspicious.

For the city’s black residents, the ruling did not come as a surprise. “[T]he black community has been screaming about this forever and no one cares,” Roxbury organizer Jamarhl Crawford said in a 2012 interview with the Boston Phoenix. And a July 2016 poll found that 32 percent of black Bostonians believe the city’s police treat minorities unfairly. 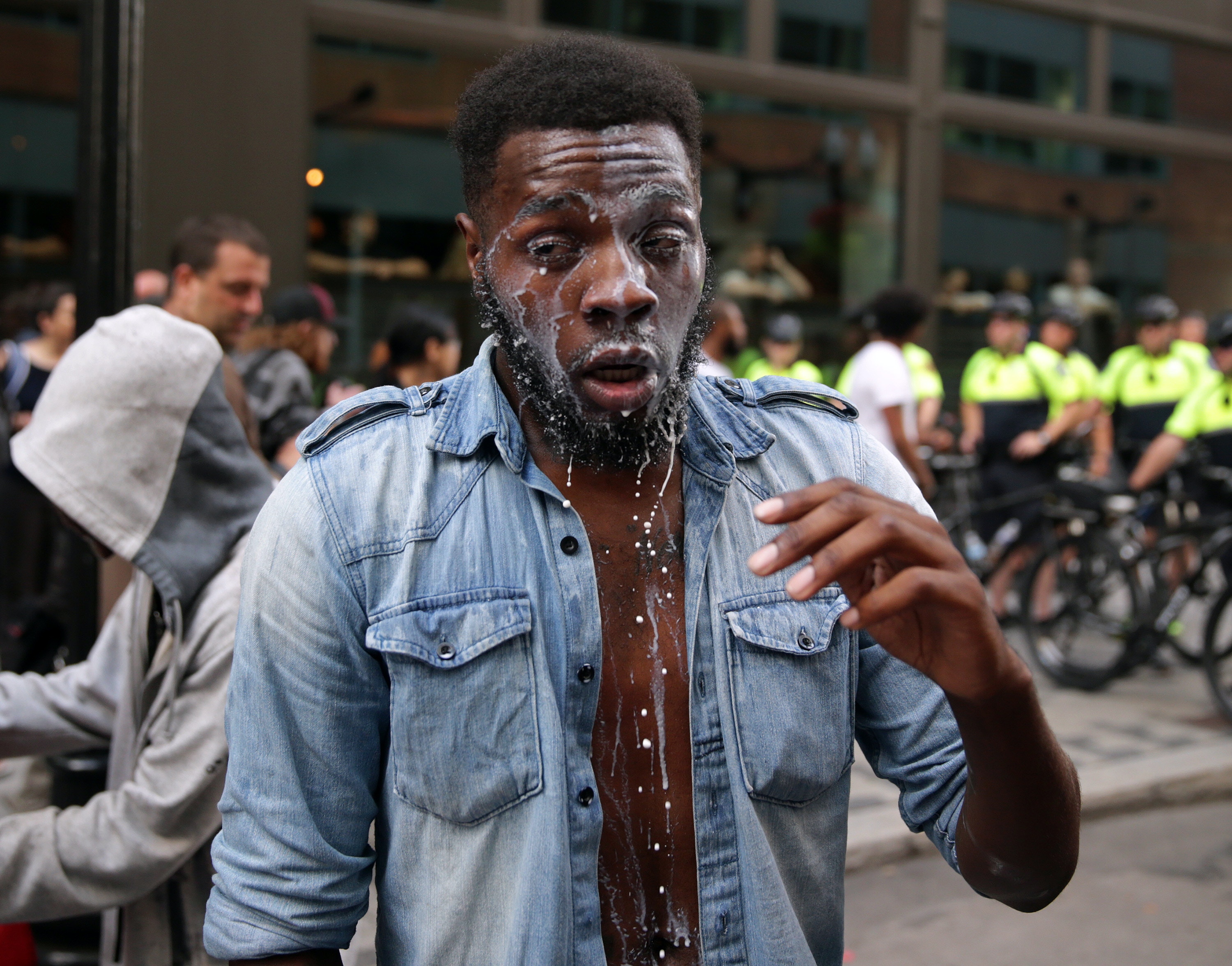 A protester drips of milk after being maced on Washington Street in Boston following the “free speech rally” and counterprotest on Aug. 19, 2017.

The distrust that black counterprotesters held for police was evident throughout Saturday. At one point, Boston hip-hop artist Oompa confronted a man wearing a Republican Party T-shirt. She later recalled telling the man that wearing the shirt was “violent,” and that his presence was a threat to her community. Police intervened and got between the two, but with their back to the Trump supporter. Oompa told police that the positioning meant officers saw her as a threat and were protecting the right-wing activist.

“Your back is to him, because you’re protecting him,” Oompa said to a white officer. “If your back was to me, it would mean you have my back. Your back ain’t to me.”

After the crowd dispersed, Oompa told The Intercept that the police behavior at the rally showed a double standard for different ideologies. She cited police behavior at demonstrations against white supremacy, Nazism, and fascism as evidence of different priorities. “The people who oppose those protests, they’re in such close proximity to us,” said Oompa. “There isn’t that same kind of protection.”

The rally, which was planned in July, originally featured a number of controversial right-wing figures as speakers. A prior event in May had a hard right-wing tilt and drew members of Proud Boys, a far-right men’s organization, and tea party Republicans. Far-right figures, such as Augustus Invictus and Proud Boys head Gavin McInnes, both of whom who have made anti-Semitic comments in the past, were expected to speak at last weekend’s revival, but dropped out of the rally.

Permits for the right-wing rally had been issued on July 13, according to the Boston Free Speech organization’s Facebook page. But after violence at a white nationalist gathering on Aug. 12 in Charlottesville, Virginia, left an antiracist protester dead, Boston city officials made clear they were not in favor of the event.

The demonstration went on nonetheless, and far-right rally-goers began to gather in the morning at the Parkman Bandstand in the west of the Common. Police barricades surrounded the rotunda, and another ring of barricades was set up around the perimeter of the building’s footprint.

The level of police protection struck Oompa as excessive. “They are not only on a platform with a barricade,” she said, “they have a secondary barricade and multiple police around to protect what’s happening there.”

The demonstration ended before 1 p.m., as attendees were escorted by police off the rotunda.

After removing them from the bandstand, police corralled the group into a utility building next to the Central Burying Ground on the southeast corner of the Common near the intersection of Boylston and Tremont streets. The rally-goers were then loaded into police prisoner transports for extraction.

Meanwhile, a large crowd had assembled on Boylston outside of the building’s exit. People move toward Boston Common during a march from Roxbury as part of a counterprotest to the “free speech” rally on the Boston Common, Aug. 19, 2017.

Dozens of riot police arrived on the scene at approximately 1 p.m. from a staging area on Charles Street, to the east of the Common. By about 1:30, Boston, Massachusetts state, and other jurisdictions’ police had opened up an exit through which to extract the right-wing demonstrators. The route down Boylston to John F. Fitzgerald Surface Road, however, was blocked by protesters.

Rinaldo Del Gallo, a self-described progressive activist from Lenox, Massachusetts, and a scheduled speaker for the event, was in one of the transports. Facebook Live video from Mark Jackson, a Wakefield, Massachusetts, man, shows Del Gallo and a number of rally attendees in the back of the van sweating and discussing politics. “The temperature went up a lot and the fan wasn’t on” in the back of the vehicle, said Del Gallo. He added that requests for air went unheard and that the group in the transport were “asphyxiating.” (The police declined to comment on their tactics.)

Outside of the vehicles, the riot police began pushing the crowd back toward Tremont Street. A bottleneck formed and people were pushed toward the intersection by police swinging batons and using the clubs to shove protesters out of the way.

“Who do you serve? Who do you protect?” yelled demonstrators.

The back and forth of the police moving forward and engaging in standoffs with protesters continued for three blocks — along with the clashes. Counter-demonstrators, still mostly people of color, raised their hands, stood in the way, and continued to call for the police to make the rally-goers walk. Police repeatedly attacked protesters, and the crowd threw a few projectiles at them.

By about 2 p.m. the prisoner transports broke through the crowd and made their way down Essex and out of downtown. A man is arrested by police as hundreds of counterprotesters try to block “free speech” protesters from leaving the Boston Common after the rally on Aug. 19, 2017, in Boston.

Despite the skirmishes, the police quickly remarked that they had kept violence at bay. “From a security standpoint, it was by and large successful,” said James Kenneally, a media relations officer for the Boston Police Department, who added that 33 arrests had been made.

Police Commissioner William B. Evans agreed that the protests were largely peaceful in a press conference later that afternoon. While “99.9 percent” of the protesters were there for the right reason, Evans said, there were some people who wanted to cause trouble.

Evans added that the extraction went well. “There was a little bit of a confrontation,” he said. “I think you’ve seen that public order platoons came out. That was the plan, as you know, I was hoping we wouldn’t have to bring them out, but I thought they did a good job moving that crowd.”

However, Boston resident Ashley Lloyd said police were too aggressive with protesters. And the notion that the police were expending their resources to protect people with a hateful ideology while detaining counterprotesters was something that she, and others, found especially distasteful.

“There were a lot of people who weren’t doing much that were arrested today,” said Lloyd.

The “free speech” rally attendees, on the other hand, were pleased with the police protection. Organizer John Medlar posted on his Facebook page that the department “literally saved our lives” and that he couldn’t thank them enough. Del Gallo put the blame for the street clashes squarely on protesters for not clearing a path for the police. “To me, that’s a kind of violence,” he said.

Yet counterprotesters said they were exercising their right to speech and standing up for their city. Tony Massey said he was born and raised in Boston and came out to counterprotest to protect his community. “We have to be here,” said Massey. “This is our community.”

Lori Childs, a counterprotester from Rockland, Massachusetts, told The Intercept that pushing the rally-goers out of the city was a clear win and a “shot heard round the world.”

“Many revolutions have started in Boston,” she said.

For Lloyd and other black demonstrators, the police response was uncalled for and indicative of a disproportionate response. “Their actions today, to me, were unacceptable,” said Lloyd, “for us, as a community, unacceptable.” Lloyd stressed that she was not opposed to the police in general, but that their behavior in pushing and striking people demonstrating against the far-right crossed a line.

As far as Oompa was concerned, it was just more of the same. “For the police to … look at me like I’m the threat, it’s a constant narrative,” said Oompa. “And that shit ain’t going to change.”

Top photo: Riot police respond during a “free speech” rally that was met with thousands of counterprotesters on Aug. 19 in Boston.