I Asked the U.S. Military for Its Leaflets About Joseph Kony. It Sidestepped the Request, Then Burned Them.

The Pentagon printed millions of leaflets in its hunt for warlord Joseph Kony. Yet none were available when a reporter made a FOIA request for them. “Joseph Kony Est Mort,” reads a leaflet bearing the murderous Central African warlord’s visage and the message, in French, that he has died.

Over the last six years, the United States invested the better part of $1 billion to make that statement a reality. America sent military advisers, set up bases, gathered intelligence, and funded and equipped local proxies across the region in an effort to kill or capture Kony and destroy his Lord’s Resistance Army, a militia that has committed atrocities since the 1980s. The U.S. military even created that flier to tout Kony’s death and sent reams of them to a shadowy outpost in the Central African Republic where they sat, waiting for the day they could rain down from the sky. Now that leaflet — and that dream — have gone up in smoke.

Late last year, via a Freedom of Information Act request, I asked the U.S. military for a copy of the “Joseph Kony Is Dead” flier and other similar leaflets dropped by the millions in Central Africa. I was told, after a search, that the fliers could not be located — not one single leaflet. They had apparently vanished, never to be seen again. That is, until they were.

When they were found, the military could, of course, have contacted me. They could have sent them to me. But the military had other plans for the documents. And those plans didn’t involve me. What they instead involved – perhaps in a breach of U.S. law — was incineration. Yet even before the burning, the military found a novel way to comply with my FOIA request without really complying with it; a means of achieving victory in a FOIA fight – what they were never able to do in their battle against Joseph Kony. 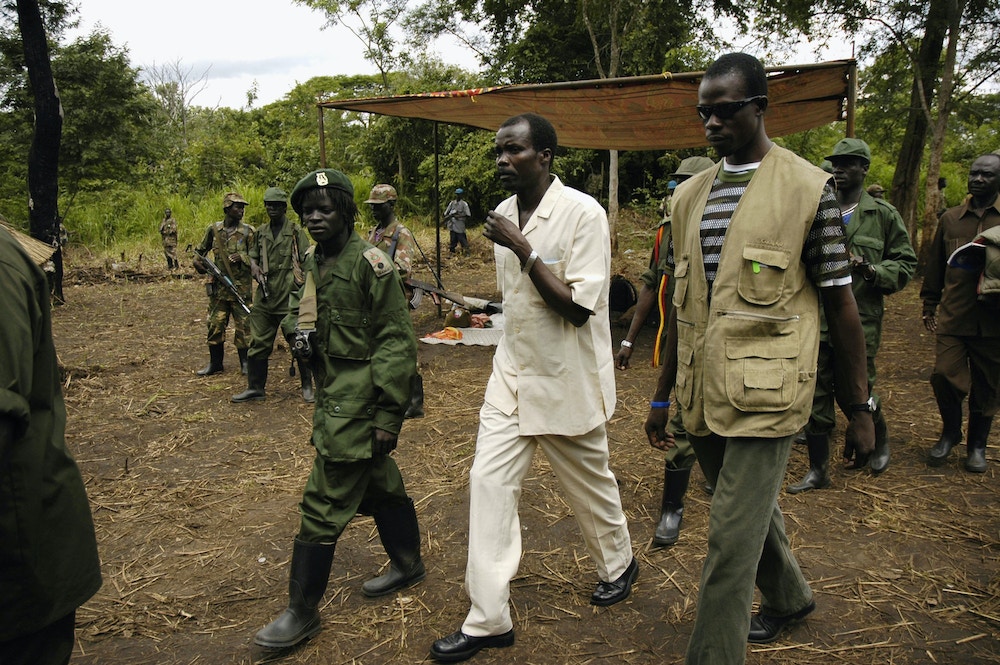 Joseph Kony, head of the Lord’s Resistance Army, center, arrives at a clearing to take part in peace talks in southern Sudan on Aug. 1, 2006.

In 2008, the United States began pouring resources into military efforts to capture or kill Kony and wipe out the LRA. Three years later, former President Barack Obama launched Operation Observant Compass, a ramped-up campaign that saw around 100 U.S. military personnel deployed to the Central African Republic, Democratic Republic of Congo, South Sudan, and Uganda to aid local proxies in the war. “It is time to end Kony’s reign of terror,” wrote Sen. James Inhofe, R-Okla., at a time when the warlord’s force reportedly numbered about 150 to 300 armed fighters.

In 2012, the charity Invisible Children, created a frenzy with “Kony 2012,” a 30-minute film that was plugged by celebrities from Justin Bieber to Kim Kardashian, and viewed more than 100 million times on YouTube. Criticized as ahistorical, oversimplified, inaccurate, reductive, manipulative, and the worst sort of slacktivism, the tugs-at-the-heartstrings viral video about Kony’s victims was nonetheless praised by the Obama administration and helped drive the U.S. military campaign. In the years that followed, America would send more troops, equipment, and resources to the fight. “In eastern Africa, we are working with partners to bring the Lord’s Resistance Army to an end,” Obama announced in 2013.

The Pentagon says that, since 2011, about $780 million has been spent to battle the LRA. Yet Kony was never captured or killed, and the LRA is still in the field with an estimated 150 to 250 fighters under arms — perhaps the same number of soldiers as when Observant Compass began. The U.S. has nonetheless packed up shop and ended the effort. When asked this spring about the failure to find Kony, Maj. Gen. Joseph Harrington, the commander of United States Army Africa, replied: “Everyone will meet their maker at some point.”

Close-up of a Pentagon-supplied image of its Joseph Kony leaflets.

The “Joseph Kony Est Mort” leaflet was one of the many fliers created by U.S. soldiers specializing in Military Information Support Operations – formerly known as Psychological Operations – and was, according to Defense Department spokesperson Maj. Audricia Harris, set “for rapid release to remote parts of the Central African jungle” in the event Kony was ever killed.

While I had asked Special Operations Command to provide copies of those leaflets, what they instead sent to me were three pages with 94 tiny images — some partially redacted, all barely readable due to their size. When I asked again for the actual leaflets, or at least larger images, SOCOM’s FOIA office told me that despite a “comprehensive search of records, this is the only copy of the documents that could be located responsive to your request. We tried enlarging the document, but unfortunately it degrades even further.”

For years, various components of the U.S. military have thrown up a variety of roadblocks to my reporting. They have, at times, led me on with promises of information only to renege months later, ignored my calls and emails, feigned failing phone lines, hung up on me, lost my FOIA requests, kept me waiting for years to provide documents, and released documents so heavily redacted as to be utterly useless. The leaflet response could be still another technique. You might call it the “FOIA microdot method” — shrink materials to the point they’re almost unreadable. A Pentagon leaflet shows a man in front of a pizza and asks, “Hungry?”

The tiny, blurred images were nonetheless tantalizing – one leaflet reads “Hungry?” above a photo of a man leaning over a pizza pie. (Is a pizza margherita the preferred lure for Central African bush fighters?) Other leaflets seem to indicate the locations of U.S.-Ugandan military outposts. Some provide telephone numbers to use in the event, it seems, you spot the LRA: Text “1” or “LRA” to +236-724-17071. (Don’t bother, I tried texting and got no response.) So many are, however, just too tiny and fuzzy to properly discern.

When I first asked how it was that SOCOM wasn’t able to get their hands on any of the original leaflets, I was told that the FOIA office had “conducted a search in accordance with the FOIA, in all places that would reasonably have records that you requested, and provided you [a] copy of all of the pamphlets that we had.” In May, weeks after SOCOM told me they couldn’t locate any of the fliers, I would open the New York Times to find a crisp, clear photo of the actual “Kony Est Mort” leaflet that I had previously seen only in microdot form.

When I inquired about the leaflet at the Pentagon, they had no problem identifying exactly where it had been located all along. The fliers were, Maj. Harris told me by email, “pre-positioned … at the temporary forward operating location in Obo, Central African Republic” – a remote U.S. outpost integral to the failed campaign against Kony.

Once located, however, the leaflet was not sent along to me. According to Harris, it “was in the process of destruction by incineration when the New York Times reporter photographed it” earlier this year.

“Initial indications seem to be that this particular leaflet was picked up near a controlled burn site and was not fully incinerated,” she explained. Judging by the photo in the Times, the incineration process was about as successful as the hunt for Kony. The “not fully incinerated document” appears nearly pristine and completely untouched by flame.

If the leaflets were located after my FOIA request was closed, the military was not legally obligated to inform me of their discovery, but the “destruction of records is an extreme, irreversible measure that may also be a violation of the Federal Records Act,” says Steven Aftergood, director of the Project on Government Secrecy at the Federation of American Scientists in Washington. “It seems to me that the SOCOM leaflets are not just ‘interesting’ documents,” he explained, “but that they would likely also qualify as permanent federal records of enduring historical value. If so, an original file copy ought to have been preserved by law.”

Top image: The Pentagon provided this low-resolution image of its Joseph Kony leaflets, in response to a reporter’s FOIA request.