A Georgia advocate for removing Confederate monuments gets a not-so-veiled-threat from a GOP lawmaker. 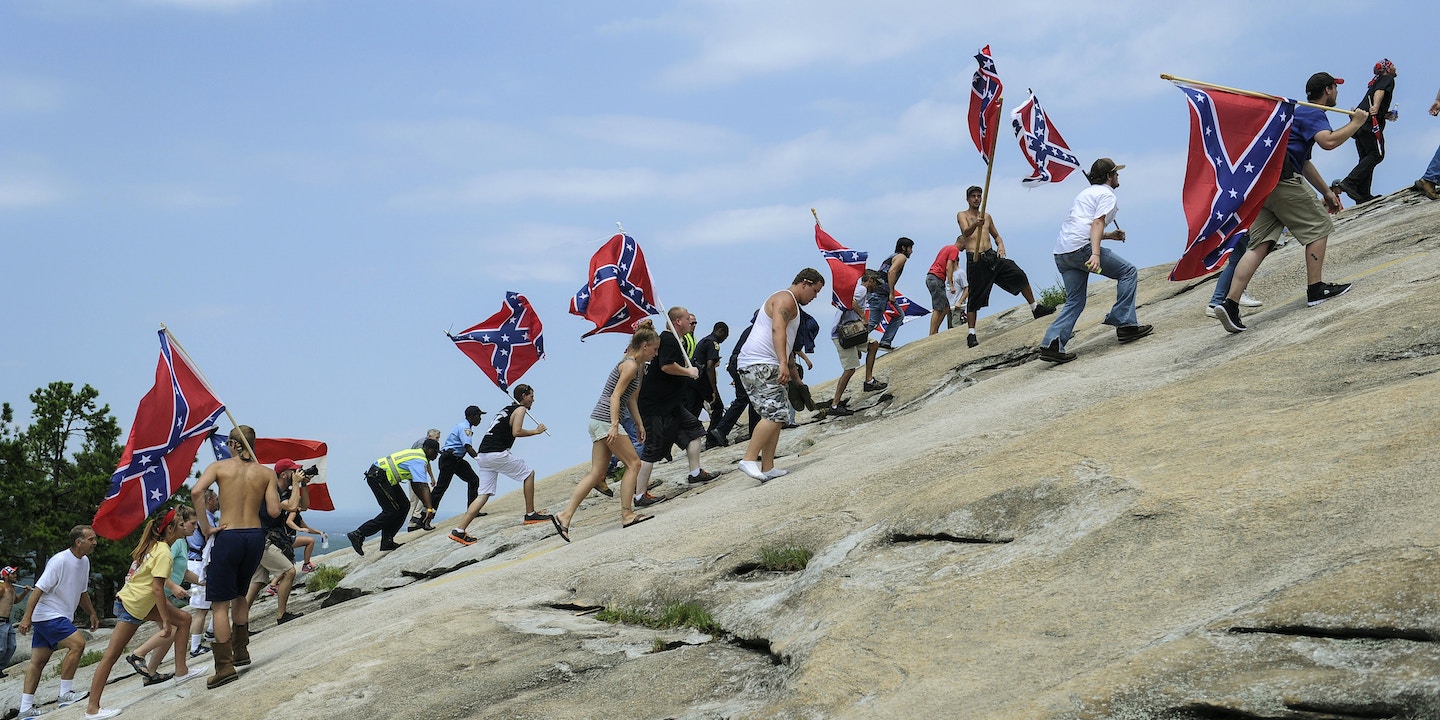 Former Georgia Democratic state Rep. LaDawn Jones is a long-time advocate of removing the state’s Confederate monuments. In 2015, she pushed for a boycott of Georgia’s Stone Mountain after a white supremacist massacred nine black churchgoers in Charleston, South Carolina, arguing that the Confederate etching there had become a rallying point for far-right extremists.

Jones’s advocacy, however, has spawned a vitriolic reaction from some of her opponents. On Monday, GOP state representative Jason C. Spencer posted a photograph with a Jefferson Davis memorial on Facebook, saying that it represents the state’s history. Jones took issue with Spencer’s stance, saying that she doesn’t want to pay for statues to the Confederacy. He shot back: “Continue your quixotic journey into South Georgia and it will not be pleasant. The truth. Not a warning.” The two continued to argue, until at one point Spencer chimed in that people advocating for the removal of Confederate symbols will “go missing in the Okefenokee” — a reference to a large swamp and wildlife refuge near the border with Florida. Jones was taken aback by Spencer’s words, saying they sounded “like a threat of physical violence.” But she countered that the next generation of people in South Georgia will “come work for me and my children who were taught no one is better than anyone else.” Jones told the Atlanta Journal-Constitution that she is cordial with Spencer, who she has known for years.

“If it were anybody other than Jason Spencer, then I would be alarmed. But we had a unique relationship in the Georgia Legislature,” she said. “If that had come from anybody else, I’d take it as a serious threat.”

But she also told the paper she was “concerned” by his reaction, “because if that’s representative of what people in south Georgia think, then yikes.”

In her fight against Confederate memorials, Jones has been met with resistance from both parties.

In the 2015-2016 legislative session, she was one of three cosponsors of HB 760, which would convert Stone Mountain from a Confederate memorial to a Civil War memorial.

In a blog post earlier this month, Jones said she internally pushed for House Democrats to rally around removing Confederate symbolism from Stone Mountain following the 2015 Charleston shooting.

But she writes that she was rebuffed by then-House Minority Leader Stacey Abrams — who is today one of two Democrats running for governor — when she met with her in August 2015 to try to get her support for the bill.

“As leader of the caucus, support includes being a sponsor on the bill,” she explained to The Intercept. “Getting other allies to support it was my first ask.” Abrams “was not interested in that,” Jones said.

Jones then tried to get Abrams and other lawmakers to take a caucus-wide position on the bill. Many Georgia House members, Jones said, are hesitant to take caucus positions because if  “one of your caucus members does not stand in line, it kind of weakens the value of taking a caucus position.” So an informal poll was taken. “Her answer again to that was no,” Jones said.

Jones then fell back on trying to get Democratic state House officials to take a public stand together.”Even if we don’t do legislation, we can do a press conference, we can do a statement, we can do something as a Democratic caucus,” she said. “Her response to that was, ‘No, that sounds like something you should do with the Legislative Black Caucus.'”

In mid-August, following the tragedy in Charlottesville, Abrams came out for removing the Stone Mountain carving. Abrams’s evolution on the issue fuels the type of criticism that has been leveled at her previously: that while she may be campaigning to the left during a primary contest, her record is far more moderate, notably when she backed GOP cuts to the state scholarship in 2011. (Abrams says that by working with Republicans on the cuts, she staved off what would have been more draconian reductions had she not engaged.)

On background, a member of Abrams’s campaign team offered a response to Jones’s blog post. “Abrams has led protests against the Confederate flag, and as minority leader, worked with Chairman Emeritus Calvin Smyre to secure the statue of Dr. King on the grounds of the Capitol. As a member of the Georgia Legislative Black Caucus and as minority leader, she deferred to the leadership of the GLBC — who were spearheading the effort — regarding the 2015 debate. Rep. Jones did not submit legislation in 2016 for inclusion in the Georgia House Democratic Caucus agenda.”

Jones says she introduced the bill to Abrams in 2015, so the two narratives do not technically conflict with each other.

Top photo: Confederate flag supporters climb Stone Mountain to protest of what they believe is an attack on their Southern heritage during a rally at Stone Mountain Park in Stone Mountain, Ga., on Saturday, Aug. 1, 2015.