An envoy said North Korea won’t negotiate on its nuclear program — as long as the U.S. threatens it. A Post editor quietly cut that last part out. 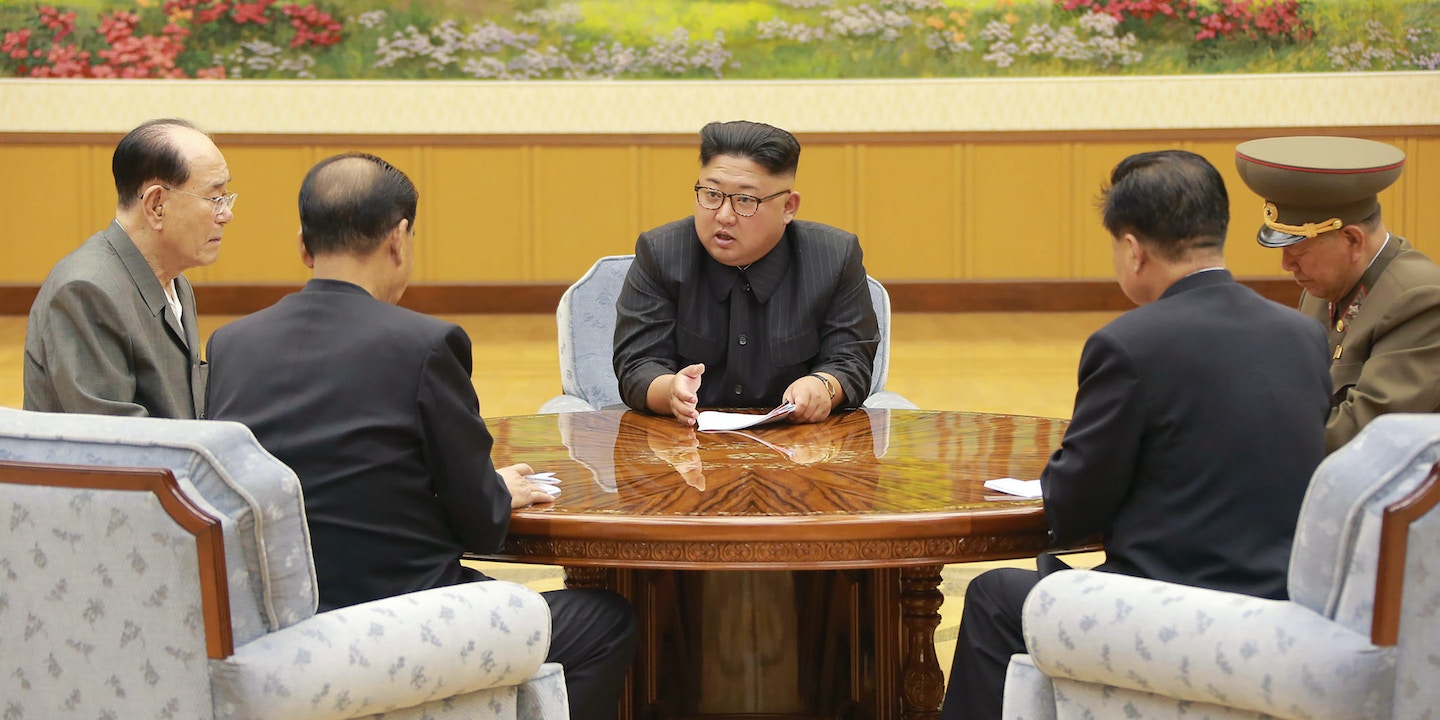 No normal human being should ever have to read the Washington Post’s op-eds and unsigned editorials. But the Post’s words have a huge impact on the hive-mind of America’s foreign policy apparatus — and hence where we’re going to war next — so it’s important that someone normal pay attention and report back.

So as a quasi-normal person, I recommend you pay close attention to this, from a recent column by the Post’s deputy editorial page editor, Jackson Diehl, about North Korea:

[North Korean dictator Kim Jong-un] has shown no interest in talks — he won’t even set foot in China, his biggest patron. Even if negotiations took place, the current regime has made clear that “it will never place its self-defensive nuclear deterrence on the negotiating table,” as one envoy recently put it. [emphasis added]

Here’s why that matters:

1. While the Post’s link is dead, it’s meant to take you to this Associated Press story.

This is what the envoy, North Korea’s Deputy UN Ambassador Kim In Ryong, actually said, according to a transcript from North Korea’s UN Mission quoted in the AP article:

“As long as the U.S. hostile policy and nuclear threat continue [emphasis added], the DPRK, no matter who may say what, will never place its self-defensive nuclear deterrence on the negotiation table or flinch an inch from the road chosen by itself, the road of bolstering up the state nuclear force.”

Moreover, many North Korean officials, including Kim himself, have used precisely this formulation over and over again since July 4, when North Korea launched what appeared to be its first genuine intercontinental ballistic missile.

And Diehl’s column is by no means the only example of this misrepresentation. As long as North Korean officials have been saying this, the U.S. media has frequently been cutting the qualifier.

It’s also worth noting that Diehl likely knew he was making this important elision. North Korea’s qualifier appears both in the article’s headline and its first paragraph:

Finally, Diehl clearly read North Korea’s statement, since he cut and pasted its language. It’s hard to imagine he didn’t consciously or unconsciously decide to leave that crucial part out.

So does North Korea’s current rhetoric mean it would ever agree to halt, roll back, or even eliminate its nuclear weapons program? If they did agree to it, would they follow through? North Korea observers disagree on the likelihood of this.

But it does in fact matter that debates among foreign policy elites in the pages of the Post and elsewhere be based in reality. The reality is that North Korea is saying that, under certain conditions, it will put its nuclear weapons on the table.

It’s long been reported that Diehl is a primary force behind the Post editorial page’s drift to constant belligerence on foreign policy – which can be seen in its unsigned editorials, the writers chosen to be regular columnists, and its guest op-eds. When Colbert King, one of the few African Americans on the Post’s editorial board, decided to step down, he wrote a memo criticizing Diehl’s influence.

Unsurprisingly, Diehl was a supporter of the 2003 invasion of Iraq (although he urged the Bush administration to make its case more on human rights than unconventional weapons). And just as with North Korea today, Diehl made basic factual errors, such as referring to “the 1998 expulsion of the inspectors” from Iraq. In reality, the UN weapons inspectors were withdrawn from Iraq by the UN itself ahead of the U.S. Desert Fox bombing campaign. Iraq then refused to allow the inspectors to return, citing the fact that the inspectors had been used to spy on the Iraqi regime and that Desert Fox was a clear violation of the UN charter.

According to Fred Hiatt, the overall editor of the Post’s editorial page, Diehl is “rigorously honest, and I have never seen him reluctant to engage in an argument to defend his position.” Diehl didn’t respond to an email asking him why he failed to portray North Korea’s rhetoric accurately.

Top photo: This picture released by North Korea’s official Korean Central News Agency (KCNA) shows North Korean leader Kim Jong-un (C) attending a meeting with a committee of the Workers’ Party of Korea about the test of a hydrogen bomb, at an unknown location on Sept. 3, 2017.