Just as with Cuba in 1962, the U.S. starts from the position that we must have the power to kill others, but they can’t be able to kill us. 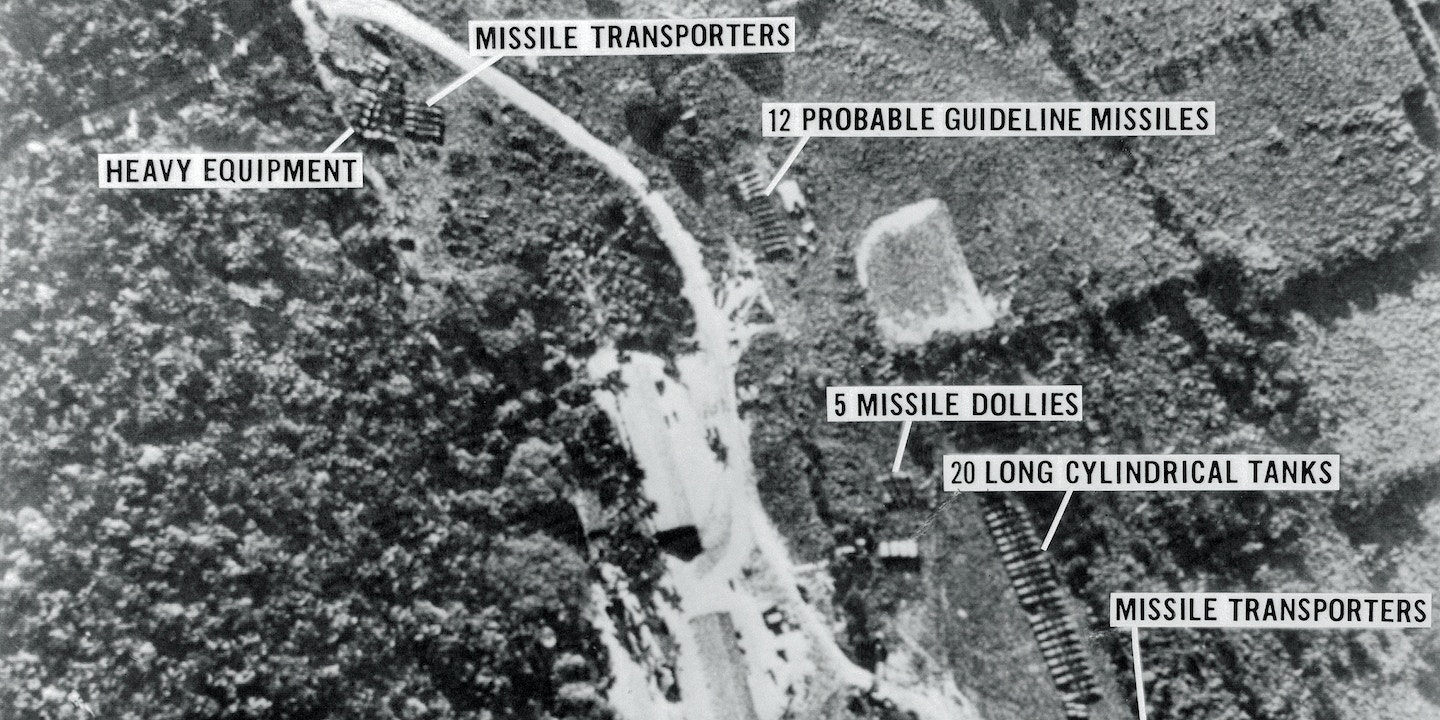 The confrontation between the U.S. and North Korea has cooled off slightly with Kim Jong-un’s announcement that, at least for the time being, he will not attack Guam with an “enveloping fire.”

So since we have a small breather before Armageddon, let’s take the time to understand what this conflict is all about.

A good place to start is with the repeated comparisons U.S. politicians have made between the situation with North Korea and the Cuban missile crisis in October 1962.

For instance, Sebastian Gorka, deputy assistant to President Donald Trump, recently said, “This is analogous to the Cuban missile crisis.”

According to Rep. Darrell Issa, R-Calif., “It represents the greatest crisis … undoubtedly since the Cuban missile crisis.”

Gorka, Issa, Markey, and Panetta are, in fact, all correct: This is quite a lot like the Cuban missile crisis. However, it’s not for the reason they appear to think, which is something like “we again face a crazy adversary that is willing to blow up the world and we should all be terrified.”

The “crisis” then and now was created by the refusal of the U.S. to live under the same threat to which we subject others.

John F. Kennedy had claimed during his 1960 presidential campaign that the U.S. faced a terrifying nuclear “missile gap” with the Soviet Union, which was poised to overwhelm the homeland at any second. As Kennedy likely knew, this was exactly the opposite of reality. The Soviets had a few dozen unreliable intercontinental ballistic missiles, while the U.S. had several hundred of much higher quality. When America’s nuclear-armed bombers and submarines were added, the U.S. had about 10 times as many nuclear warheads as the Soviets.

Soon after Kennedy took office, the U.S. stationed medium-range nuclear-tipped Jupiter missiles in Italy, and placed more in Turkey in April 1962. ICBMs launched from the U.S. would take perhaps 30 minutes to reach the Soviet Union. The Turkish missiles were about 2,000 kilometers from Moscow and therefore could strike the Soviet capital with almost no warning.

It’s still not clear how much of a role the Jupiter missiles played in Soviet leader Nikita Khrushchev’s decision to deploy Soviet nuclear weapons to Cuba, starting in the summer of 1962. Khrushchev apparently first discussed doing so after being briefed on the missiles in Turkey, and later said the missiles in Cuba “equalized what the West like to call ‘the balance of power.’” However, another part of the Soviets’ motivation was to deter the U.S. from launching an invasion of Cuba – something which was a real possibility, given the Bay of Pigs attack the previous year and the CIA’s ongoing Operation Mongoose. 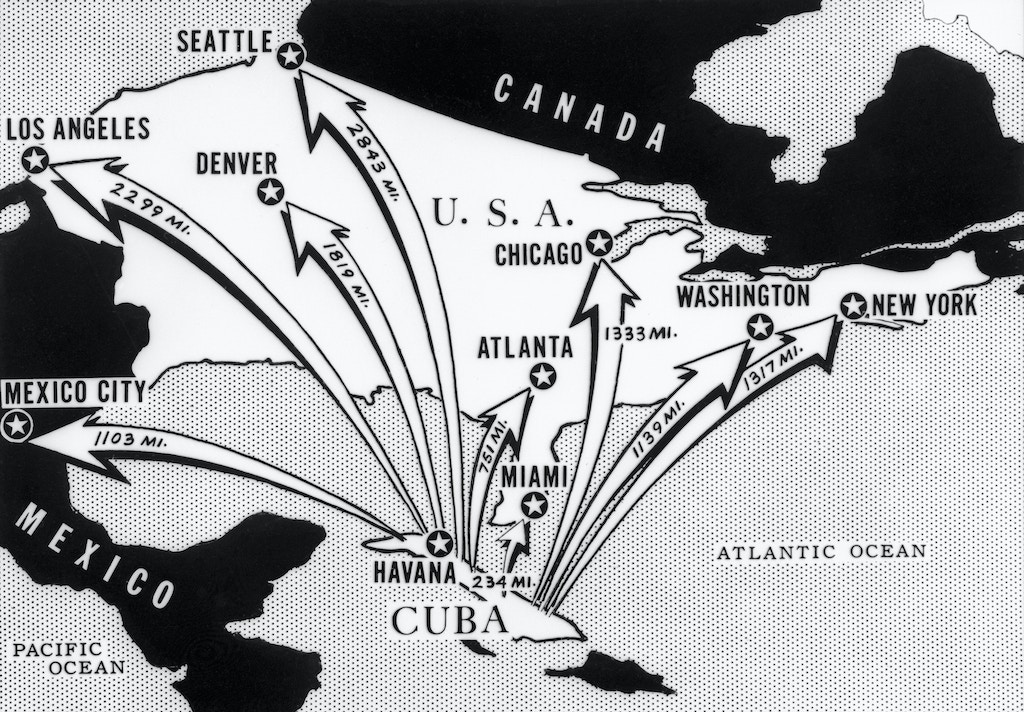 A newspaper map from the time of the Cuban missile crisis shows the distances from Cuba to various cities in North America.

But the U.S. found the concept of a level playing field completely intolerable. Kennedy pledged in September that “if Cuba should possess a capacity to carry out offensive actions against the United States … the United States would act.” So the U.S. perspective was crystal clear. The U.S. obviously had the ability to “carry out offensive actions” – meaning, a nuclear strike with little warning — against Cuba, as well as the Soviet Union. However, Cuba and the Soviets were forbidden from having the same ability.

The crisis reached its peak starting in mid-October, when photographs from a U-2 flight over Cuba proved that indeed there were Soviet nuclear missiles stationed there. The military pushed Kennedy hard to order a full-scale invasion of Cuba, which would have likely led to all-out nuclear war.

Then on Oct. 27, Khrushchev sent this message to Kennedy:

I understand your concern for the security of the United States, Mr. President, because this is the primary duty of a President. But we too are disturbed about these same questions; I bear these same obligations as Chairman of the Council of Ministers of the U.S.S.R. …

You wish to ensure the security of your country, and this is understandable. But Cuba, too, wants the same thing; all countries want to maintain their security. …

You are disturbed over Cuba. You say that this disturbs you because it is 90 miles by sea from the coast of the United States of America. But Turkey adjoins us; our sentries patrol back and forth and see each other. Do you consider, then, that you have the right to demand security for your own country and the removal of the weapons you call offensive, but do not accord the same right to us? You have placed destructive missile weapons, which you call offensive, in Turkey, literally next to us. How then can recognition of our equal military capacities be reconciled with such unequal relations between our great states? This is irreconcilable. …

I therefore make this proposal: We are willing to remove from Cuba the means which you regard as offensive. Your representatives will make a declaration to the effect that the United States … will remove its analogous means from Turkey. …

The United States will respect the inviolability of Cuba’s borders and its sovereignty, will pledge not to interfere in its internal affairs, not to invade Cuba itself or make its territory available as a bridgehead for such an invasion.

This seems extremely reasonable, especially given that the alternative was nuclear annihilation for all involved. And fortunately for humanity, Kennedy stood up to the pressure from the Pentagon and many of his advisers to go to war, and accepted Khrushchev’s proposal. (Remarkably, however, the Kennedy administration lied repeatedly to Americans about the Jupiter missiles, pretending that they had not been part of the deal, and we’d only agreed not to invade Cuba.)

“The United States is used to being the giant on the block, and the bully on the block,” says Peter Kornbluh, senior analyst at the National Security Archives and one of the foremost experts on the Cuban missile crisis. “And when other smaller countries come along and begin to act in the same kind of national security doctrine way that our country has always acted, we are … in denial that other countries have the same interests in preservation under the dark threat that we pose.”

Khrushchev’s son Sergei recently explained that he believes the American worldview paradoxically grows out of the fact we’ve faced so few genuine threats. “The enemy at the gate, missiles on your borders … is part of [Russian] historical experience,” according to the younger Khrushchev, who is now a senior fellow at the Watson Institute for International Studies at Brown University. “When Americans placed missile bases in Turkey or any other European country [it] didn’t create any panic … Americans were lucky. They lived all the time protected by two oceans. So they’re scared at everything as a nation. … In 1962 [Americans] found they could be killed just the same as any others because of the crisis. … Here it appears they are vulnerable, they can be killed also. This created the panic.” And that brings us to our conflict today with North Korea. The U.S. of course has possessed the ability to instantly destroy North Korea with nuclear weapons for 60 years. Moreover, we already leveled the country once with conventional weapons during the 1950s, killing perhaps one-fifth of its population. The equivalent number of deaths for the U.S. today would be over 60 million people.

That, however, has never been a “crisis,” just as it was not a crisis when the Kennedy administration put nuclear missiles in Italy and Turkey. It has become a crisis because it appears North Korea may be close to being able to put nuclear weapons on ICBMs that can reach the continental U.S.

Where this crisis goes from here is anyone’s guess, especially with someone as dangerous as Trump in charge of America’s nuclear arsenal. But if the U.S. and the world make it out of this one alive, perhaps Americans will finally learn what they should have figured out in 1962.

“The 55th anniversary of the missile crisis is coming up,” says Kornbluh. “It’s a big reminder of the danger of having nuclear weapons in human hands, since human beings are fallible. The people involved in the Cuban missile crisis … understood that one of the main lessons was that as long as there are nuclear weapons, the danger of them being fired, even in accident, is real. The current crisis speaks to the need for non-proliferation and denuclearizing.”