Three Years After 43 Students Disappeared in Mexico, a New Visualization Reveals the Cracks in the Government’s Story

An interactive from research agency Forensic Architecture offers new avenues for investigation into the unresolved crime that rocked Mexico in 2014. The Mexican government’s story goes like this: On the night of September 26, 2014, roughly 100 students from Ayotzinapa, a rural teaching college, clashed with municipal police in the city of Iguala, in the southern state of Guerrero. Rocks were thrown, shots were fired, and 43 students were snatched up by the authorities and handed over to a local drug gang. The students were then driven to a garbage dump where they were murdered, burned to ash, and tossed into a river, never to be seen again. This, Mexico’s attorney general once said, was “the historical truth.”

Horrific as it sounds, this “truth” is a hollow and misleading narrative, which has been debunked and exploded by independent inquiries. With the third anniversary of the tragedy approaching, a new project by an international team of investigators has taken the most damning of those inquiries and visualized them, offering a means of seeing the night of September 26 for what it truly was: a coordinated, lethal assault on the students involving Mexican security forces at every level, and grave violations of international law.

The interactive platform, constructed by the research agency Forensic Architecture at Goldsmiths, University of London, and shared with The Intercept in advance of its public release, pulls from a voluminous body of investigations into the crime. In addition to utilizing the most credible evidence available to illustrate how the night unfolded, the platform highlights inconsistencies in the government’s account of the events and tracks individual actors throughout the ordeal.

For instance, users can follow the trail of a military intelligence agent whose movements and communications throughout the night indicate that he looked on for nearly an hour as Ayotzinapa students were attacked and disappeared, providing updates to his superiors at a nearby Infantry Battalion in real time. The military agent’s position, visualized in the platform, contradicts the version of events he repeatedly described in testimony to federal prosecutors. A screenshot from the Forensic Architecture platform reconstructs the attack on Mexican college students in the city of Iguala. Circles of red indicate crime scenes, colored lines show communications between Mexican security forces.

The “web-based cartographic tool,” as Forensic Architecture describes it, overlays roughly 5,000 individual incidents and data points onto an interactive map. These include 520 instances of communications between individuals, publicly available information concerning the activities of 93 students and nearly 500 mentions of other individuals and vehicles known to be involved in the events that night — from individual police officers and Mexican soldiers, to civilian bystanders and first responders. The data points are broken down, cataloged, and tagged based on a range of criteria, including types of movement, medical assistance and communication, legal processes or investigative efforts, and finally, instances of violence or obstruction of justice. Together with a rolling timeline, the platform allows users to watch police and military units respond to the students’ presence in Iguala, both physically and in electronic communications. Clicking on an individual or instant provides details on that moment in time, highlighting instances in which publicly available information is contradictory or questionable; for example, because the information was the result of reported torture.

Beginning this week and running through January 2018, the platform will be showcased at the Museo Universitario Arte Contemporáneo (MUAC) in Mexico City, in addition to living online. It was commissioned by the world-famous Argentine Forensic Anthropology Team (Equipo Argentino de Antropología Forense, EAAF) and the Centro de Derechos Humanos Miguel Agustín Pro Juárez (Centro Prodh), one of Mexico’s most well-respected human rights organizations. Both the EAAF and Centro Prodh have played central roles in the Ayotzinapa story, with the former debunking the government’s mass funeral pyre scenario and the latter providing years of legal support to survivors and families of the disappeared.

In a statement accompanying the platform’s release, Centro Prodh said that the platform illuminates details on several key incidents and, in particular, highlights the need for an investigation into the Mexican army’s role in the events — something the Mexican federal government has actively resisted.

The platform also visualizes other Mexican authorities’ involvement, showing the physical proximity of federal and state police investigators to key moments of violence throughout the night, and recreating specific attacks involving Mexican security forces by stitching together publicly available information and photos taken by Forensic Architecture team members during visits to the scenes of the crimes. Combining spatial analysis from photographs with other evidence is a tactic that Forensic Architecture has used to investigate other human rights abuses, including in a recent collaboration with The Intercept, which showed that U.S. military personnel had been present near sites where prisoners were tortured in Cameroon.

“Making all these connections has never been done before,” in the Ayotzinapa case, researcher Theo Resnikoff told The Intercept. “We can’t say we found the students — we haven’t gotten that far, but we are able to show what that night was about.” 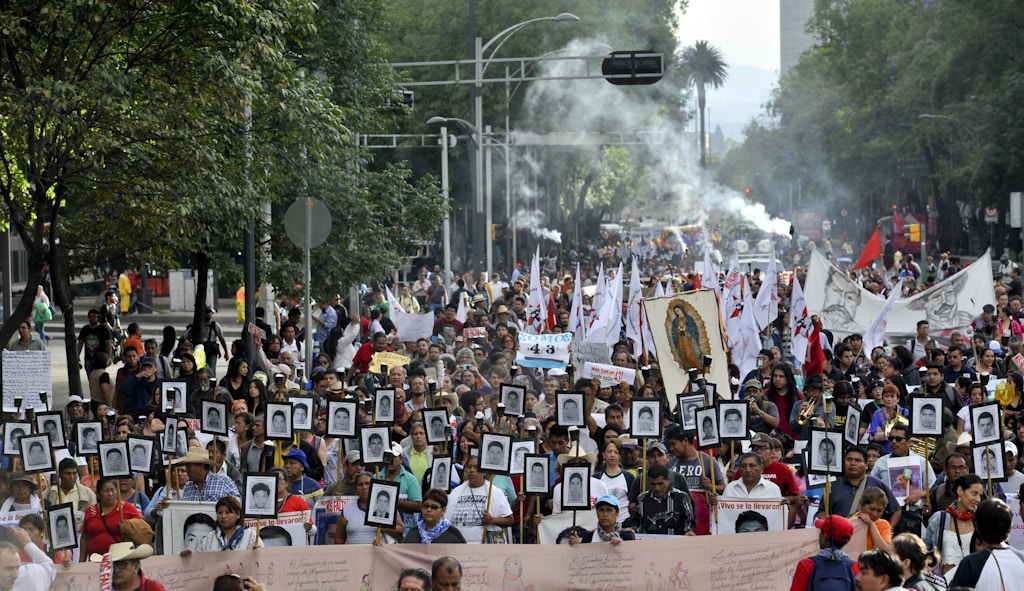 The parents of 43 missing students from Ayotzinapa teachers’ school hold their portraits and torches during a march 18 months after their disappearance in Mexico City on April 26, 2016.

The Ayotzinapa case has always been confounding for its complexity. In addition to the disappearance of 43 students who had attempted to flee the city on five commandeered buses, the events of September 26 included multiple crime scenes — over the course of roughly eight hours, the attacks left six people dead, including a taxi passenger, a 15-year-old member of a semi-professional soccer team, and a student who was tortured and mutilated. More than 40 people were seriously wounded, including one student who remains in a coma. In 2015, The Intercept published a two-part investigation into the students’ disappearance, which found glaring holes in the government’s version of events, including claims that the students were collectively burned in a trash pit, and pointed to an egregious case of enforced disappearance, a violation of international law in which government security forces participate in, or allow for, the kidnapping of an individual or individuals.

After excavations in the mountains around Iguala turned up several mass graves but none of the missing students, prompting mass protests across Mexico, the Inter-American Commission on Human Rights appointed a panel of respected experts to investigate the now infamous attacks. The Interdisciplinary Group of Independent Experts, as the panel was known, presented its first report in September 2015 and its second in April 2016. Totaling more than 1,100 pages, the reports revealed compelling evidence that Mexican security forces at every level played a role in the events of September 26 and documented instances in which key witnesses in the government’s narrative were reportedly tortured into making confessions. In addition to corroborating The Intercept’s conclusions and those of numerous investigative journalists on the ground in Mexico, the GIEI reports presented a hypothesis concerning the potential motivation for the attacks: that the students may have inadvertently attempted to flee Iguala on a bus loaded with drugs. In the economically ravaged and federally neglected state of Guerrero, the line between organized crime and the state is virtually nonexistent, and the central city of Iguala is a hub for much of the U.S.-bound opium fueling the current opioid crisis.

Far from seeing their findings followed up with a meaningful investigation by the Mexican government, members of the GIEI panel, as well as others advocating on the students’ behalf, were targeted with sophisticated spyware and ran out of the country in 2016. A screenshot from the Forensic Architecture platform reconstructs an attack on a semi-professional soccer team involving Mexican security forces that left a 15-year-old dead and others wounded.

The experts’ reports became the backbone of the Forensic Architecture project. By visualizing the enormous body of information compiled by the GIEI, Resnikoff said, it becomes abundantly clear that the federal government’s depiction of the attack on the students and the disappearance of 43 of their classmates as a crime confined to a handful of bad-apple local cops and their organized crime partners does not hold up.

“When you look at the coordination,” he said, “You realize that there’s no way it could have just been these cartels getting away with it, with all of these government forces around, with all of them knowing everything.”

In addition to the GIEI reports, Forensic Architecture also drew heavily from reporting by John Gibler, a veteran journalist who last year published “Una Historia Oral de la Infamia,” a book-length oral history of the attack on the students drawn from the eyewitness accounts of their surviving classmates, parents of the disappeared, reporters on the ground that night, and others (an English translation of the book, titled “I Couldn’t Even Imagine That They Would Kill Us,” is due out in November). Culled from more than 100 interviews, Gibler’s oral history provided a “completely invaluable view of what the students saw that night,” Resnikoff said.

In an interview, Gibler said that the Forensic Architecture platform could be an important tool in countering the Mexican government’s lies and cover-up.

“Their story has always been about confusion, corruption — it’s never been about a state-coordinated operation,” Gibler told The Intercept. Under international law, enforced disappearance is a crime that is actively being committed from the moment a person is taken to the moment they are found. In the case of Ayotzinapa, Gibler said, that means the families of the 43 disappeared students have been the victims of an ongoing crime for nearly three years. In Gibler’s view, the bureaucrats and government officials who have aided in that cover-up are just as culpable as the security forces on the ground. “It’s the administrative stage of forced disappearance,” he said.

During the height of its international attention, the Ayotzinapa story brought Mexico to an edge, Gibler said. “There was a moment in November 2014 when it seemed it like the broad social indignation, the violence against the students and the government’s dealing with it, that could have led to some kind of a snap, some kind of a break,” he said. Unfortunately, “the government weathered the storm.” The administration of President Enrique Peña Nieto offered their narrative in early 2015 of what had happened and stuck with it.

“They just flat-out lied,” Gibler said. As a result, he said, “The overwhelming, broad, social indignation was largely defeated by the state’s operation of lies, torture, destruction of evidence, fabrication of evidence.”

The intent of the Forensic Architecture platform is to keep pushing back on those lies by providing new potential lanes for investigation, Resnikoff explained. “That’s what it’s for really,” he said. “It’s made for investigators to keep doing this and to keep looking into things and to keep trying to find details or moments where something might be important.”

Top photo: The father of one of the 43 missing students from the Ayotzinapa teachers’ school participate in a press conference after a meeting with the General Prosecutor of the Republic (PGR) in Mexico City on April 14, 2016.