Trump’s attorney general condemned abuses against free speech rights on college campuses, but he was selective in his defense. 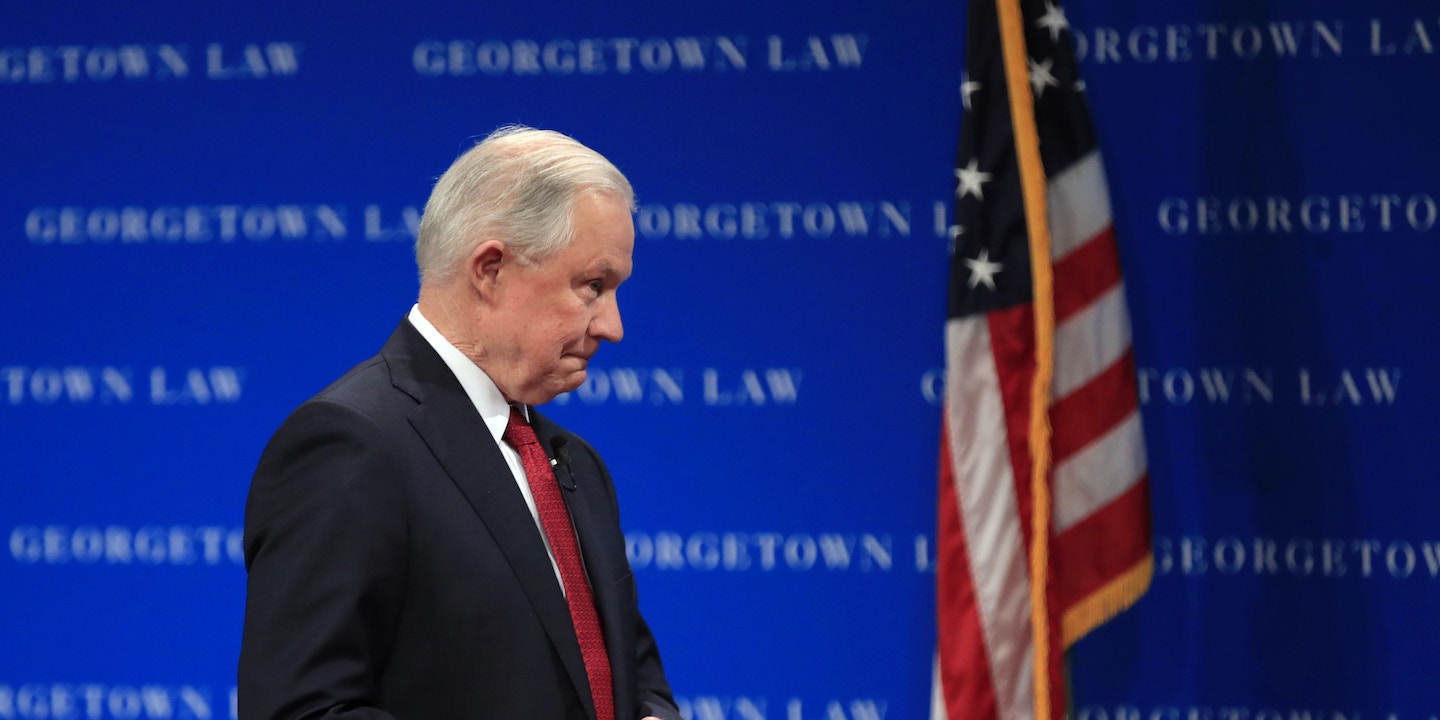 As debates about free speech on college campuses rage, Attorney General Jeff Sessions on Tuesday said that America’s universities are “transforming into an echo chamber of political correctness and homogeneous thought, a shelter for fragile egos.”

“Speech and civility codes violate what the late Justice Antonin Scalia rightly called ‘the first axiom of the First Amendment, which is that, ‘as a general rule, the state has no power to ban speech on the basis of its content,’” Sessions said, quoting the late former U.S. Supreme Court justice who graduated from Georgetown Law 60 years ago. “In this great land, the government does not get to tell you what to think or what to say.”

But Sessions works for a U.S. administration that has indeed told people what to think. Trump yesterday told the NFL what it “must respect,” just days after calling on the league to fire players who took a knee during the national anthem.

The issue of kneeling has nothing to do with race. It is about respect for our Country, Flag and National Anthem. NFL must respect this!

Students and faculty at the Washington, D.C.-based university were quick to point out the discrepancy between the topic of Sessions’s speech and the policies of the administration he represents. Dozens of students stood outside the auditorium where he spoke, some holding signs with messages such as, “Hate speech is not free speech.” Thirty academics on Monday night wrote a formal letter of protest labeling the attorney general a hypocrite — pointing to, among other things, Trump’s many missives condemning Americans’ right to free speech.

The speech and resulting protests demonstrate a divergence in views on campus free speech: Sessions (and most libertarians) argues that colleges and universities should protect offensive speech, which is covered by the First Amendment, but many educational institutions restrict such speech on the grounds that it is inherently harmful to their students and staff.

As evidence of growing threats to campus free speech, Sessions cited a number of examples of colleges cancelling speeches in response to student protests. He also pointed to a 2017 survey by the Foundation for Individual Rights in Education that found that 40 percent of colleges and universities surveyed had policies that “substantially infringe on constitutionally protected speech.”

Speaking to The Intercept before Sessions’s speech, FIRE’s Legislation and Policy Director Joe Cohn said he would like to see the attorney general use his bully pulpit to address numerous threats to campus free speech, including strict restrictions on where students can protest and increasing violence around campus speakers.

“It’s really a positive development to see the Department of Justice addressing the issue of free speech on campus because literally every civil right that we have has had its source in free speech and the ability to criticize the government or organize and to express themselves,” Cohn said.

Sessions on Tuesday referenced the issue of “free-speech zones” on college campuses, which Cohn described as more akin to “quarantine zones.” Some colleges limit protests and political activity to specifically designated zones; outside these areas, students can be punished for taking part in demonstrations.

These speech zones are so common that seven states have passed legislation to restrict college and university use. FIRE estimates one in 10 American colleges have some sort of free speech zone policy. Last November, Kevin Shaw, a student at Los Angeles Pierce College, made national headlines after he was barred from passing out copies of the U.S. Constitution because he was doing so outside his school’s free speech zone.

Randy Barnett, director of the Georgetown Center for the Constitution, moderated Sessions’s speech and gave students the chance to submit questions to the attorney general. Most queries, Barnett said, were related to Trump’s controversial remarks on the NFL protests.

Sessions was quick to defend his boss. “Well the president has free speech rights, too,” he said. “He sends soldiers out every day to defend this country under the flag of the United States, under the national anthem, and the unity that those symbols call on us to adhere to. So I agree that it is a big mistake to protest in that fashion, because it weakens the commitment we have to this nation that has provided us this freedom. I would note, of course, that the players aren’t subject to any prosecution, but if they take a provocative act, they can expect to be condemned.” Although the attorney general zoomed in on policies that violate the free speech of all students, he emphasized abuses against conservatives. For instance, Sessions spoke of University of California, Berkeley spending $600,000 on security for right-wing speaker Ben Shapiro’s address, but he conspicuously failed to address the issue of student advocacy for Palestinian rights, which has been a hot-button issue on college campuses in recent years. Many colleges have penalized or suppressed activism on the subject. In fact, dozens of members of Students for Justice in Palestine, an advocacy group with chapters across the country, have been punished by administrators for their activism, according to a report by Palestine Legal and the Center for Constitutional Rights.

At Fordham University, administrators have essentially told students how to think about foreign affairs, a clear degradation of the culture of free speech and inquiry that Sessions said he believes in. The Bronx-based school effectively banned its SJP chapter. Keith Eldredge, the dean of students at Fordham, explained the decision in an email: “While students are encouraged to promote diverse political points of view, and we encourage conversation and debate on all topics, I cannot support an organization whose sole purpose is advocating political goals of a specific group, and against a specific country, when these goals clearly conflict with and run contrary to the mission and values of the university.”

It’s not just private universities that have suppressed speech on Palestine. In 2015, the University of Illinois paid out a $600,000 settlement after rescinding a job offer to Palestinian-American academic Steven Salaita — whose appointment had come under fire from pro-Israel activists.

Toward the end of his remarks, Sessions vowed that the DoJ would defend speech rights regardless of whose rights are being violated. “Starting today, the Department of Justice will do its part in this struggle. We will enforce federal law, defend free speech, and protect students’ free expression from whatever end of the political spectrum it may come,” he said.

Time will tell whether his department lives up to his promise, but the Justice Department did take a step on Tuesday to challenge a legitimate abuse of student speech rights: It filed a statement of interest in Uzuegbunam v. Preczewski, a lawsuit brought by students at Georgia Gwinnett College to challenge a “free-speech zone” that covers only 0.0015 percent of their campus.