The PBS series by Burns focuses on soldiers’ stories, with scant attention to the immense number of Vietnamese civilians who suffered and died. 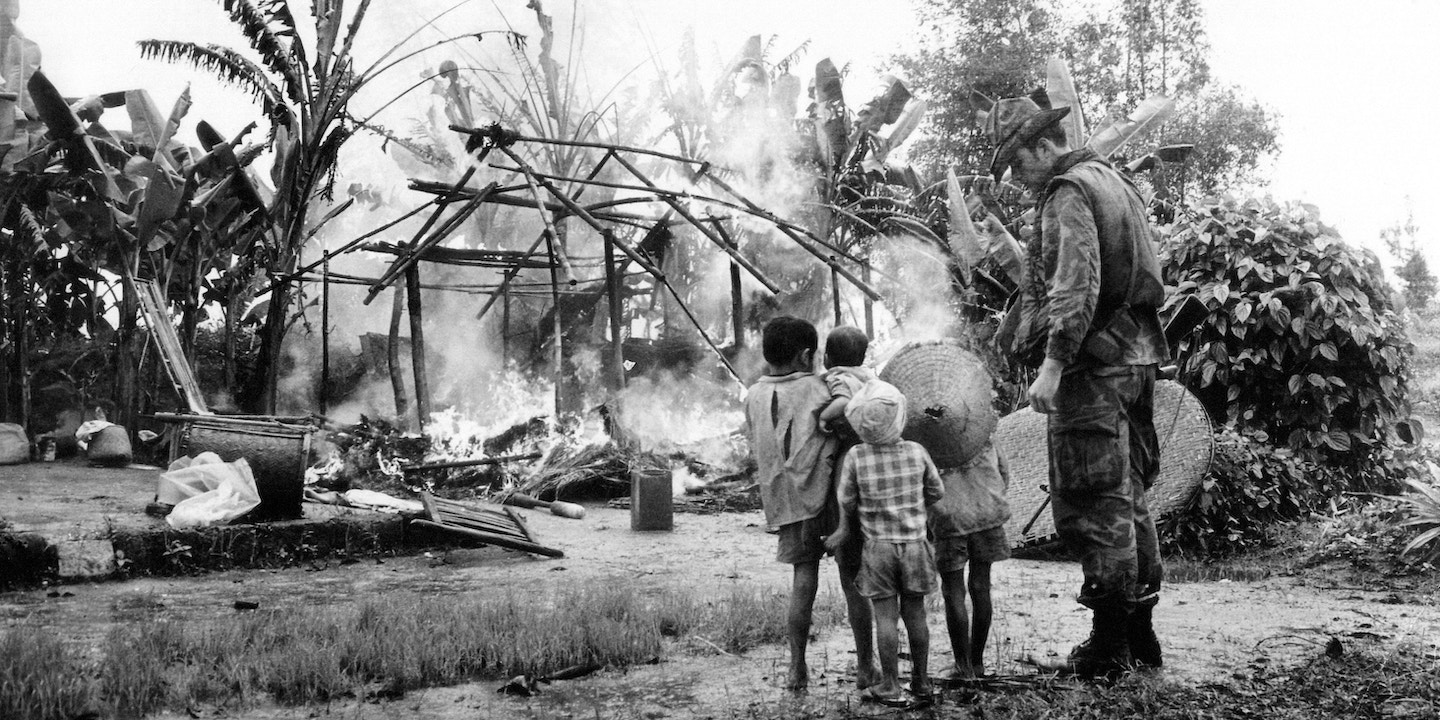 “I think that when Americans talk about the Vietnam War … we tend to talk only about ourselves. But if we really want to understand it … or try to answer the fundamental question, ‘What happened?’ You’ve got to triangulate,” says filmmaker Ken Burns of his celebrated PBS documentary series “The Vietnam War.” “You’ve got to know what’s going on. And we have many battles in which you’ve got South Vietnamese soldiers and American advisors or … their counterparts and Vietcong or North Vietnamese. You have to get in there and understand what they’re thinking.”

Burns and his co-director Lynn Novick spent 10 years on “The Vietnam War,” assisted by their producer Sarah Botstein, writer Geoffrey Ward, 24 advisors, and others. They assembled 25,000 photographs, feature close to 80 interviews of Americans and Vietnamese, and spent $30 million on the project. The resulting 18-hour series is a marvel of storytelling, something in which Burns and Novick take obvious pride. “The Vietnam War” provides lots of great vintage film footage, stunning photos, a solid Age of Aquarius soundtrack, and plenty of striking soundbites. Maybe this is what Burns means by triangulation. The series seems expertly crafted to appeal to the widest possible American audience. But as far as telling us “what happened,” I don’t see much evidence of that.

War is not combat, though combat is a part of war. Combatants are not the main participants in modern war. Modern war affects civilians far more and far longer than combatants. Most American soldiers and Marines spent 12 or 13 months, respectively, serving in Vietnam. Vietnamese from what was once South Vietnam, in provinces like Quang Nam, Quang Ngai, Binh Dinh, as well as those of the Mekong Delta – rural population centers that were also hotbeds of the revolution — lived the war week after week, month after month, year after year, from one decade into the next. Burns and Novick seem to have mostly missed these people, missed their stories, and, consequently, missed the dark heart of the conflict.

To deprive their Vietnamese enemies of food, recruits, intelligence, and other support, American command policy turned large swathes of those provinces into “free fire zones,” subject to intense bombing and artillery shelling, that was expressly designed to “generate” refugees, driving people from their homes in the name of “pacification.” Houses were set ablaze, whole villages were bulldozed, and people were forced into squalid refugee camps and filthy urban slums short of water, food, and shelter. 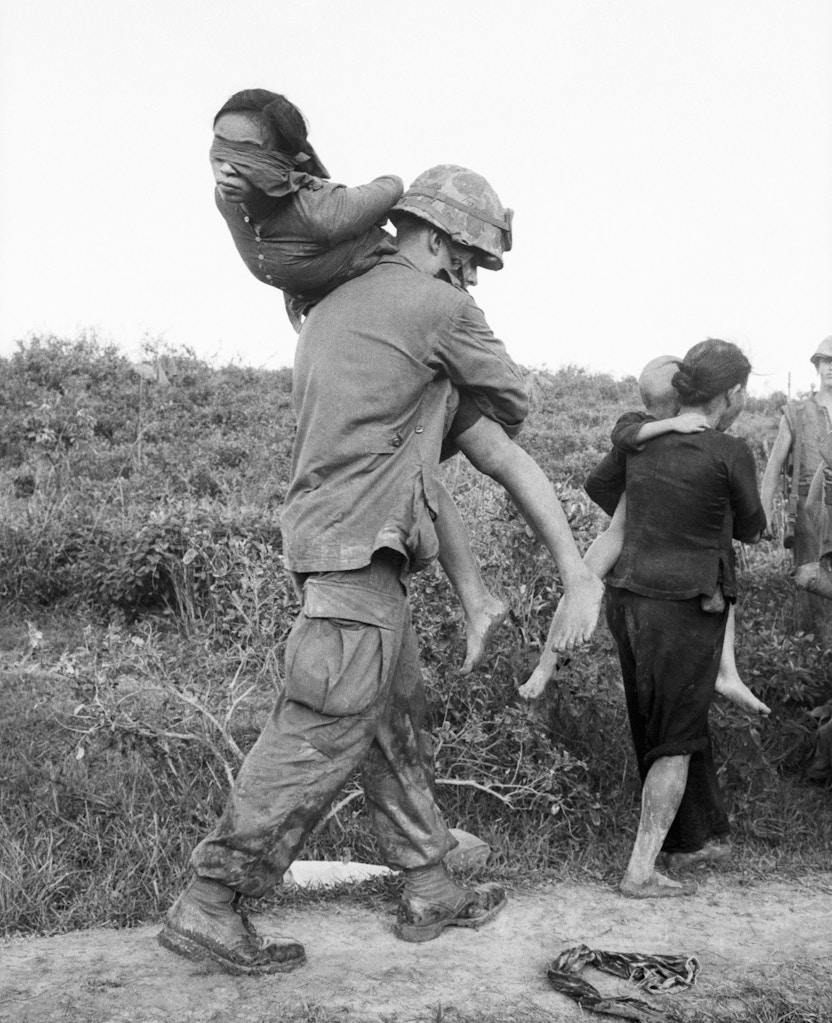 A U.S. Marine carries a blindfolded woman suspected of Vietcong activities over his shoulder. She and other prisoners were rounded up during the joint Vietnamese-U.S. Operation Mallard, near Da Nang, Vietnam.

I spoke with hundreds of Vietnamese from these rural areas. In hamlet after hamlet, they told me about being rousted from their homes and then being forced to drift back to the ruins, for deeply-held cultural and religious reasons, and often simply to survive. They explained what it was like to live, for years on end, under the threat of bombs and artillery shells and helicopter gunships. They talked about homes burned again and again and again, before they gave up rebuilding and began living a semi-subterranean existence in rough-hewn bomb shelters gouged into the earth. They told me about scrambling inside these bunkers when artillery fire began. And then they told me about the waiting game.

Just how long did you stay in your bunker? Long enough to avoid the shelling, of course, but not so long that you were still inside it when the Americans and their grenades arrived. If you left the shelter’s confines too soon, machine-gun fire from a helicopter might cut you in half. Or you might get caught in crossfire between withdrawing guerrillas and onrushing U.S. troops. But if you waited too long, the Americans might begin rolling grenades into your bomb shelter because, to them, it was a possible enemy fighting position.

They told me about waiting, crouched in the dark, trying to guess the possible reactions of the heavily-armed, often angry and scared, young Americans who had arrived on their doorsteps. Every second mattered immensely. It wasn’t just your life on the line; your whole family might be wiped out. And these calculations went on for years, shaping every decision to leave the confines of that shelter, day or night, to relieve oneself or fetch water or try to gather vegetables for a hungry family. Everyday existence became an endless series of life-or-death risk assessments.

I had to hear versions of this story over and over before I began to get a sense of the trauma and suffering. Then I started to appreciate the numbers of people affected. According to Pentagon figures, in January 1969 alone, air strikes were carried out on or near hamlets where 3.3 million Vietnamese lived. That’s one month of a war that lasted more than a decade. I began to think of all those civilians crouched in fear as the bombs fell. I began to tally the terror and its toll. I began to understand “what happened.”

I started to think about other numbers, too. More than 58,000 U.S. military personnel and 254,000 of their South Vietnamese allies lost their lives in the war. Their opponents, North Vietnamese soldiers and South Vietnamese guerrillas, suffered even more grievous losses.

But civilian casualties absolutely dwarf those numbers. Though no one will ever know the true figure, a 2008 study by researchers from Harvard Medical School and the Institute for Health Metrics and Evaluation at the University of Washington and a Vietnamese government estimate, suggest there were around two million civilian deaths, the vast majority in South Vietnam. A conservative killed-to-injured ratio yields a figure of 5.3 million civilians wounded. Add to these numbers 11 million civilians driven from their lands and made homeless at one time or another, and as many as 4.8 million sprayed with toxic defoliants like Agent Orange. “The Vietnam War” only weakly gestures at this civilian toll and what it means. 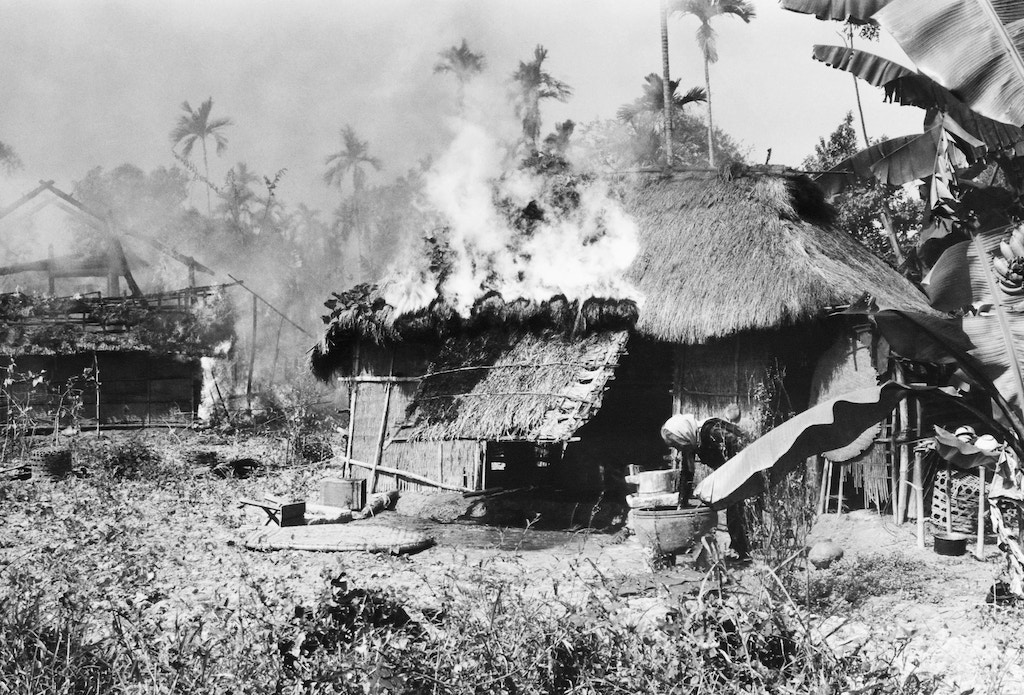 An elderly Vietnamese woman reaches into large jar to draw water in an attempt to fight flames consuming her home in a village 20 miles southwest of Da Nang, South Vietnam on Feb. 14, 1967.

It’s a striking soundbite and is obviously offered to viewers as a window onto the true face of war. It made me think, however, about someone who experienced the war far longer and more intimately than Harris did. Her name was Ho Thi A and in a soft, measured voice she told me about a day in 1970 when U.S. Marines came to her hamlet of Le Bac 2. She recounted for me how, as a young girl, she’d taken cover in a bunker with her grandmother and an elderly neighbor, scrambling out just as a group of Marines arrived — and how one of the Americans had leveled his rifle and shot the two old women dead. (One of the Marines in the hamlet that day told me he saw an older woman “gut-shot” and dying and a couple of small clusters of dead civilians, including women and children, as he walked through.)

Ho Thi A told her story calmly and collectedly. It was only when I moved on to more general questions that she suddenly broke down, sobbing convulsively. She wept for ten minutes. Then it was fifteen. Then twenty. Then more. Despite all her efforts to restrain herself, the flood of tears kept pouring out.

Like Harris, she had adapted and moved on with her life, but the atrocities, the killing, the dying, did bother her 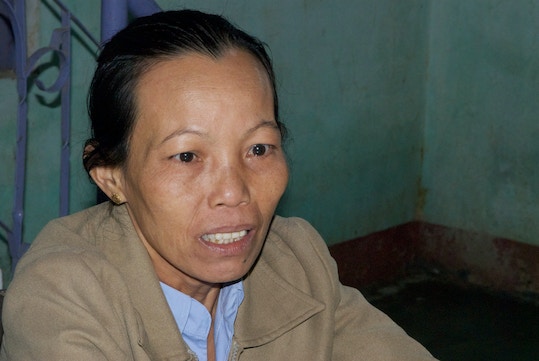 — quite a bit. That didn’t surprise me. War arrived on her doorstep, took her grandmother, and scarred her for life. She had no predefined tour of duty. She lived the war every day of her youth and still lived steps from that killing ground.

Add together all the suffering of all of South Vietnam’s Ho Thi A’s, all the women and children and elderly men who huddled in those bunkers, those whose hamlets were burned, those made homeless, those who died under the bombs and shelling, and those who buried the unfortunates that did perish, and it’s a staggering, almost unfathomable toll – and, by sheer numbers alone, the very essence of the war.

It’s there for anyone interested in finding it. Just look for the men with napalm-scarred or white phosphorus-melted faces. Look for the grandmothers missing arms and feet, the old women with shrapnel scars and absent eyes. There’s no shortage of them, even if there are fewer every day.

If you really want to get a sense of “what happened” in Vietnam, by all means watch “The Vietnam War.” But as you do, as you sit there admiring the “rarely seen and digitally re-mastered archival footage,” while grooving to “iconic musical recordings from [the] greatest artists of the era,” and also pondering the “haunting original music from Trent Reznor and Atticus Ross,” just imagine that you’re actually crouched in your basement, that your home above is ablaze, that lethal helicopters are hovering overhead, and that heavily-armed teenagers — foreigners who don’t speak your language — are out there in your yard, screaming commands you don’t understand, rolling grenades into your neighbor’s cellar, and if you run out through the flames, into the chaos, one of them might just shoot you.

Top photo: U.S. Marine stands with Vietnamese children as they watch their house burn after a patrol set it ablaze after finding AK-47 ammunition, Jan. 13, 1971, 25 miles south of Da Nang.

Nick Turse is the author of “Kill Anything That Moves: The Real American War in Vietnam,” one of the books suggested as “accompaniments to the film” on the PBS website for “The Vietnam War.” He is a frequent contributor to The Intercept.