A program that provides health coverage to some 9 million children was allowed by the GOP-controlled Congress to expire over the weekend. A program that provides health coverage to some 9 million children was allowed by the Republican-controlled Congress to expire over the weekend.

The Children’s Health Insurance Program, or CHIP, a bipartisan initiative that was originally co-sponsored by Republican Sen. Orrin Hatch and the late Ted Kennedy in the 1990s, allows children who fall above the Medicaid threshold to obtain low-cost health insurance.

Republicans diverted nearly all attention to another failed Obamacare repeal attempt. The bill’s co-sponsors, Sens. Lindsey Graham, R-S.C., and Bill Cassidy, R-La., claimed to have momentum on their side and enough votes to pass the measure, but that turned out to be false, as the effort fell short of even the mark set by the previous failed effort. Graham later acknowledged he had no idea what he was doing.

Democrats in Congress and around the country, however, fully mobilized against it, while paying little attention to the looming expiration of CHIP.

Low-income children, infants, and pregnant women rely on coverage through CHIP — it’s particularly vital for women and children of color.

Hatch, R-Utah, and Sen. Ron Wyden, D-Ore., the chair and ranking member of the Senate Finance Committee respectively, announced an agreement in September to extend CHIP funding for another five years and boost funding over time.

But the Graham-Cassidy bill, the Republican party’s most recent attempt to repeal and replace the Affordable Care Act, quickly drowned out any talk of CHIP’s future after being unveiled ahead of the deadline. “Momentum was building,” Bruce Lesley, president of First Focus, a children’s advocacy group, told a columnist for the L.A. Times. After Graham-Cassidy, Lesley said, “No one was even taking our calls.”

The Senate Finance Committee is holding a CHIP bill markup on Wednesday, but states have already been bracing for the worst and some may have to shut down their children’s health program until funding is received.

Ten states, including Arizona, California, Minnesota, North Carolina, and Washington, D.C., will run out of funding between October and December, according to the Medicaid and CHIP Payment and Access Commission, or MACPAC, a nonpartisan congressional advisory body, but most are projected to exhaust money by March 2018. 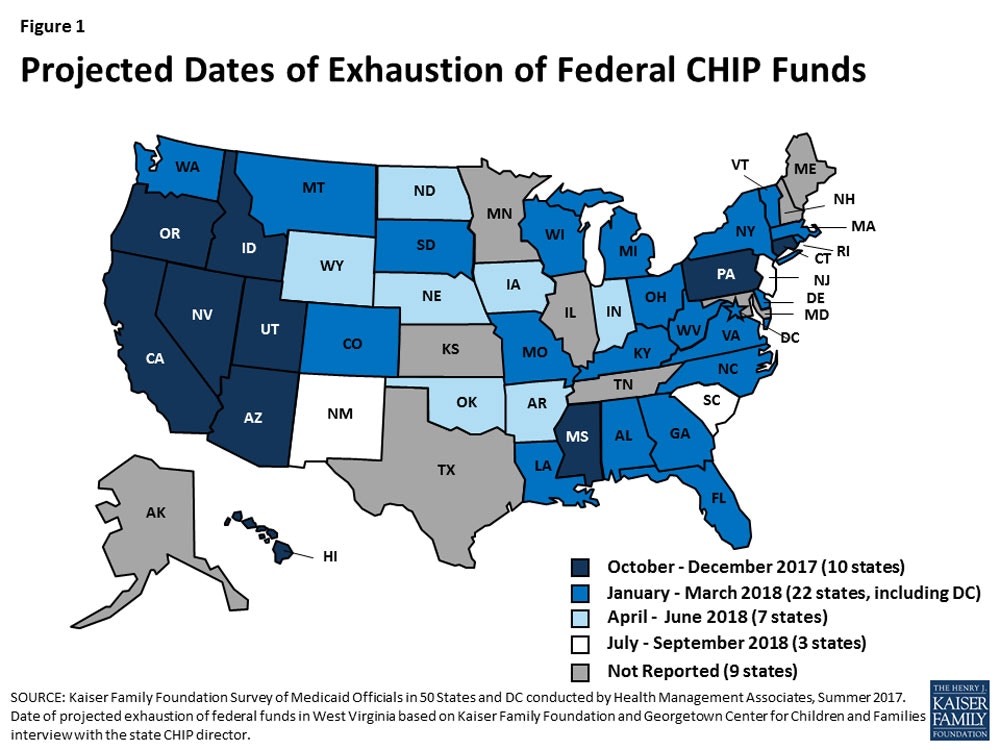 “Congress needs to act quickly to secure kids’ health care, and next week’s markup of the Senate’s strong, bipartisan CHIP bill is an important step,” Wyden said in a statement.

“Every day that passes without action following the funding deadline this Saturday means more heartache for children and families and more uncertainty for states. I will be pulling out all the stops to ensure Congress keeps its promise to America’s kids.”

At about $14 billion a year, the program is significantly smaller than Medicare and Medicaid, and is responsible for reducing the uninsured rate among children from 14 percent to 5 percent over two decades.

Because funding was not renewed, MACPAC says states will need to make decisions including whether to end CHIP, how to finance Medicaid-expanded CHIP with reduced federal spending, and how to provide information to families, providers, and plans.

Top photo: Supporters of the Affordable Care Act rally on the state Capitol steps in Denver on Jan. 31, 2017.