The big secret of politics is budget deficits are meaningless. The U.S. could easily afford to rebuild Puerto Rico and far, far more. 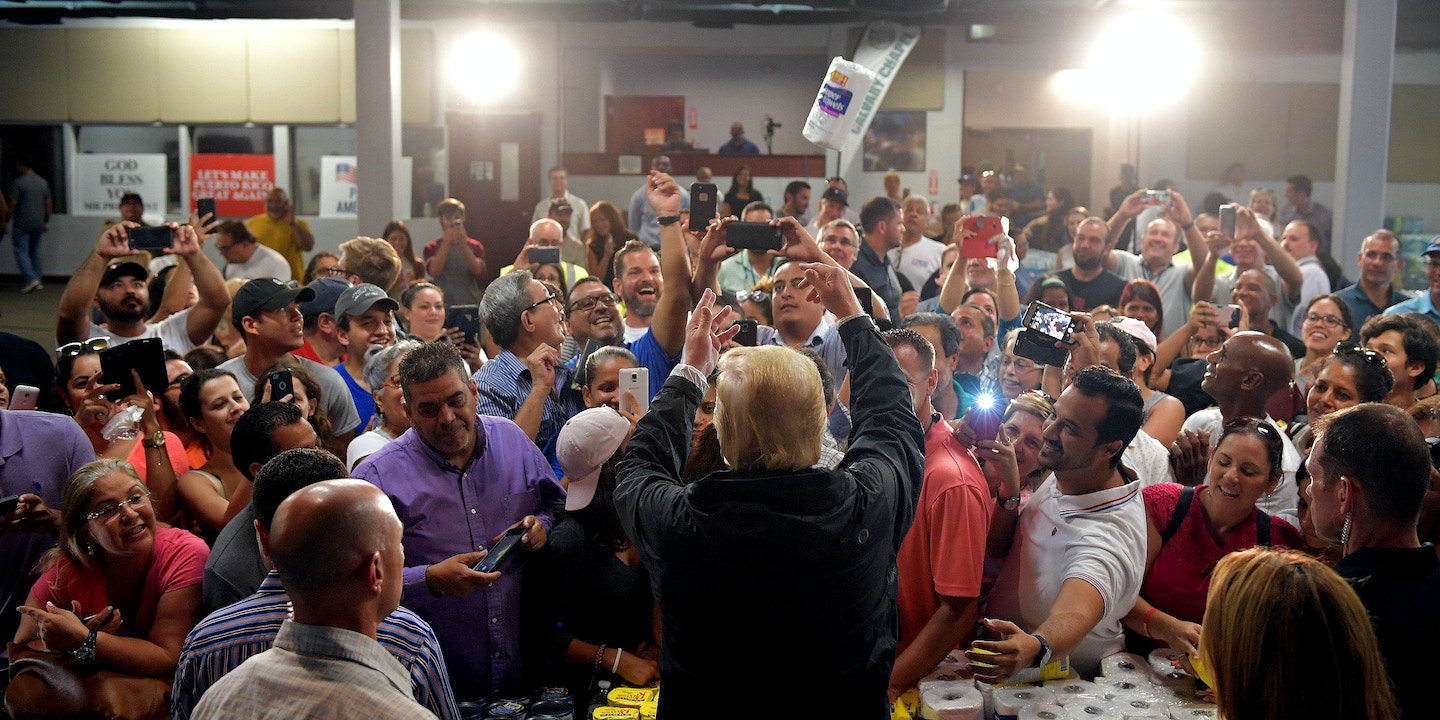 President Trump arrived in Puerto Rico on Tuesday and immediately began lauding himself and his administration for their response to Hurricane Maria. But mixed in with the self-congratulation were several references to how much relief efforts were costing.

“Our country has really gone all out,” Trump said. “It’s not only dangerous, it’s expensive. But I consider it a great honor.”

Trump then explained that Director of the Office of Management and Budget “Mick Mulvaney is here, and Mick is in charge of a thing called budget. I hate to tell you, Puerto Rico, but you are throwing our budget out of whack. We spent a lot of money on Puerto Rico, and that’s fine. We saved a lot of lives.”

Beyond the gross inappropriateness of “joking” about the money the U.S. government is spending even as American citizens continue to die in Puerto Rico, Trump’s attitude is incredibly bad economics. Moreover, his administration, Mulvaney definitely included, knows this.

Mulvaney let the secret out on CNN Sunday when talking about Trump’s proposed tax cuts:

We need to have new deficits. … We need to have the growth. … If we simply look at [these tax cuts] as being deficit-neutral, you’re never going to get the type of tax reform and tax reductions that you need to get to sustain 3 percent economic growth.

This shouldn’t have been remarkable, because by describing federal deficits as a positive good, Mulvaney was essentially saying that the sky is blue. But it was genuinely shocking, because whenever Democrats are in power, the Republican Party unites to chant in unison that the sky is green. And Democrats play along.

To understand the significance of this, it’s necessary to look back at the past 100 years.

The world learned a counterintuitive but central insight about capitalism during the 20th century: It’s just too productive. It tends to create much more supply than there is effective demand.

This doesn’t mean that capitalist countries don’t have children who go hungry or people who need to buy a new car but can’t. Far from it. Rather, it means that capitalism is extraordinarily inventive and usually generates the physical ability to produce that food and those cars — but not enough customers who can afford to buy it all. Simultaneously, there will be a small number of billionaires at the top with far more money than they could ever spend.

These frequent gluts of supply are why capitalist economies often fall into slow growth and even long-term recessions and depressions. When there’s more stuff than can be bought, factories fire some of the workers making it, then the workers who were fired are forced to buy less, then the factories fire more people, in an ongoing vicious cycle.

One of the best weapons against this, as the U.S. and the rest of the world discovered by ending the Great Depression via World War II, is for the government to run deficits by cutting taxes or increasing spending or both. Well-designed deficits will put money in the pocket of people who don’t have much and will spend it.

But even if deficits generally make life better for most people, from the perspective of the 1 percent, they’re politically repellent. A fast-growing economy means low unemployment, which puts more power in the hands of workers and less in the hands of employers. It also may generate higher prices, which reduce the value of most kinds of bonds. (A classic explanation of why we have the ability to choose to create economic booms, and the intense resistance among the rich to their countries making such a choice, is the 1943 article, “Political Aspects of Full Employment” by Polish economist Michael Kalecki.)

Thus, Republicans pretend to care about deficits during Democratic administrations because they’re desperate to prevent their opponents from benefiting from deficits’ positive effects. Meanwhile, Democratic deficits are often run up with social spending rather than tax cuts, which Republicans oppose because they worry the spending will lead to future tax hikes. (And some just don’t like social spending, period.) But when the GOP takes power, it immediately discards its rhetoric to try to utilize deficits’ usefulness for themselves.

For instance, as top GOP conservative Rep. Mark Walker of North Carolina recently explained with admirable frankness, being against deficits is “a great talking point when you have an administration that’s Democrat-led. … It’s a little different now that Republicans have both houses and the administration.”

This doesn’t mean that the U.S. can afford anything we want. There are physical limits to what countries can produce (although as World War II showed, they’re looser than we may believe). But it’s those physical limits, not abstract numbers on a government ledger, that matter.

Stephanie Kelton, professor of inequality and policy at Stony Brook University, was an adviser to the 2016 Bernie Sanders presidential campaign. She’s a forceful advocate of this general perspective, known as “Modern Monetary Theory,” which says that there are several key measurements to examine to understand how close we are to those limits.

First, there’s “capacity utilization” — i.e., how much factories and corporations are producing versus how much they can produce. This graph from the Federal Reserve shows that capacity utilization is 76 percent, a level so low that during the past 50 years it’s usually been reached during recessions. In other words, the U.S. could make far, far more stuff on a moment’s notice.

Then there’s inflation. If we were anywhere near our ability to make things, the government’s spending would be bidding up labor and material, and we’d be seeing a sharp increase in inflation. We’re not.

Then, says Kelton, there’s the U-6 gauge of unemployment. Unlike the U-3 classification that’s generally mentioned in the media, U-6 includes not just people unemployed and actively looking for work, but those who’ve given up looking and part-timers who’d prefer to work more hours. Currently at 8.6 percent, U-6 was almost two percentage points lower during the late 1990s, without any spike in inflation.

Taken together, this is a clear snapshot of a country that could easily afford to completely rebuild Puerto Rico, as well as Florida and Houston, and do far, far more besides. The only reason for Trump’s ugly remarks about the cost of keeping Americans alive is that it involves using our nation’s incredible wealth to benefit regular people rather than the ultra-wealthy like himself.

Top photo: President Donald Trump takes part in a food and supply distribution at the Cavalry Chapel in Guaynabo, Puerto Rico, on Oct. 3, 2017.