Massive Protests in Catalonia as General Strike Is Observed

Catalans peacefully expressed their rage in the streets on Tuesday, but their tolerance was severely tested by a provocative speech from the king of Spain. 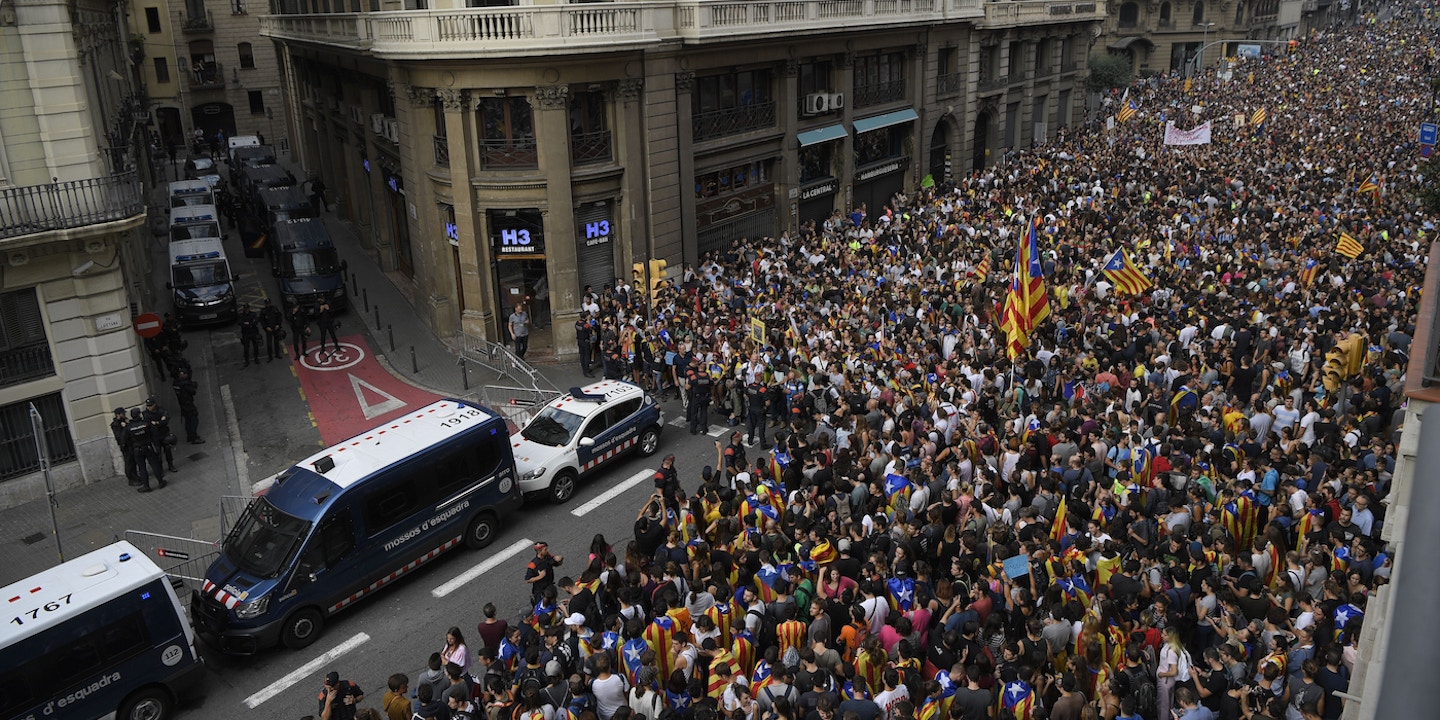 Businesses ground to a halt here in Barcelona and across Catalonia on Tuesday, as a general strike was observed and protesters poured into the streets. Two days after the Spanish government authorized the use of force to disrupt a referendum on independence from Spain, Catalans for and against secession remain livid.

A sign on a shuttered business read “Closed for dignity” in Catalan.

Spanish police officers, who injured nearly 900 voters as they attempted to cast ballots on Sunday, were a focus for much of the anger, as fresh images of the attacks continued to circulate.

The Spanish officers were protected, however, by local Catalan police and demonstrators determined to retain the moral high ground through nonviolence.

Barcelona’s mayor, Ada Colau, tweeted that 300,000 people marched in a protest that took over two hours to pass in front of local headquarters of the national police force, where demonstrators slowed to whistle, jeer, and chant, but there were no reports of violence.

"This building will become a library," people chant in front of Spanish police headquarters in Barcelona #3Oct ??https://t.co/akL6P4Duz8. pic.twitter.com/O49gMeTp2c

Among the chants from the crowd filing down Via Laietana were “Fora les forces d’ocupació” (“Withdraw the forces of occupation”) and “La vergonya d’Europa” (“The disgrace of Europe”), which was sung to the tune of “Seven Nation Army” by the White Stripes.

1 hour 20 minutes after front of protest march passed Spanish police HQ in Barcelona, street is packed and no end in sight to marchers #3Oct pic.twitter.com/qL4B64Qst1

Just before the main march had reached the police building, a young man on a bicycle tossed a beer can over the line of Catalan officers outside and was quickly surrounded by other protesters, who chanted “Som gent de pau” (“We are people of peace”) and pressed him to leave the area.

After a guy threw a beer can at the Spanish police HQ, protesters chanted "Som gent de pau" "We are people of peace" and forced him to leave pic.twitter.com/jXpPDfPfqj

In what could have been a lesson in community policing for the Spanish police officers in riot gear near the back of the building, an officer from the autonomous Catalan force, known as the Mossos, also scolded the young man but did not lay a finger on him.

Later, the Mossos defused an even more volatile situation at the rear of the police building, where a small group of young protesters had gathered to jeer at Spanish officers in riot gear, blocking their exit.

Tense as group of young protesters break off from main march to go behind national police HQ and jeer Spanish officers in riot gear #3Oct pic.twitter.com/HT7LjzxUjq

After a short time, two Catalan police vans moved into the narrow alley behind the station, and officers from what the protesters called “our police” convinced most of them to move on.

Elsewhere in Barcelona, protesters silently held their hands in the air outside a central government office, demonstrating their intention to remain peaceful.

Other residents of the Catalan capital rallied at a polling place where Spanish officers had used brutality against voters, again chanting “Som gent de pau.”

Among the crowds of pro-independence citizens of Catalonia on Tuesday, there were also some who openly opposed secession from Spain, but wanted to voice their disgust at the use of force to block the vote.

Apart from anger at the Spanish police, there was also widespread scorn for the role played by Spain’s newspaper and television journalists, who stand accused by protesters of politically motivated, “manipulative” reporting that demonizes Catalan separatists as greedy or violent.

"Prensa espanyola, manipuladora." Protesters chanted bitterly against what they called the manipulative reporting of the Spanish press #3Oct pic.twitter.com/KYGhWcSyiL

In person, however, the peaceful, even joyous nature of this democratic uprising was hard to miss. A spontaneous gathering of young protesters outside Barcelona’s city hall on Tuesday erupted at times into something more like a party.

Still, fears that the Spanish government might take further provocative steps to stoke tensions were amplified late on Tuesday when the government chose to have the King of Spain, Felipe VI, deliver a strident televised address, in which he blamed Catalan separatists for provoking the crisis and failed to even mention the police violence.

Felipe Vi, Spanish King, just made a speech on Catalonia without condemning violence and without calling for political dialogue. A Catalan Declaration of Independence is unavoidable.

“If people thought that he was going to call for dialogue, it didn’t happen,” Borja Echevarría, a Spanish journalist who is now the digital editor-in-chief of Univision News in Miami, told The Intercept. “He backed totally [Prime Minister Mariano] Rajoy’s position. He condemned Catalan leaders. He didn’t mention what happened on Sunday, the violence.”

The king “was tough and spoke to those who live in Cataluña or Catalans who feel Spanish,” Echevarría added. “He was just speaking to a part of the Catalan population and to Catalan politicians, blaming them. But what happens to those moderates in Cataluña that are fed up of Spanish politicians, and they were not separatists until not so long ago?”

Ramón Lobo, a veteran war correspondent in Madrid, called the king’s remarks “disappointing” and “very rough,” in an interview shortly after the broadcast.

There was no mention at all of dialogue, Lobo pointed out, as if the government was already preparing to invoke Article 155 of the Spanish Constitution, which would permit Spain to suspend the autonomous Catalan government and rule the region directly from Madrid. “Big mistake,” Lobo concluded.

Barcelona’s mayor agreed, calling the speech “irresponsible and unworthy of a head of state,” since it offered no solution, made no mention of the wounded and included no appeal for dialogue.

Pablo Iglesias, the head of the Podemos party, also denounced the speech, telling the unelected king that he did not speak for the five million Spaniards who voted for his party.

The king’s speech was quickly followed by what the Catalans call a cassolada, a form of protest in which dissent is expressed by making a racket, banging on casseroles, pots, and pans.

If the repression of Sunday’s vote in Catalonia set Spain back 40 years, Albano Dante, a member of the Catalan parliament, suggested on Twitter, this speech from the king set it back another 300.

Pro-independence groups mocked the king, with one calling him a “rat” imposed by the Franco regime.

Adding to the sense of crisis, the BBC reported that Catalan President Carles Puigdemont said in an interview recorded earlier on Tuesday that his government would declare independence within days.

EXCLUSIVE with Catalan President @KRLS; Catalan authorities will declare independence from Spain in a matter of days @BBCNews