The Mainstreaming of Colin Kaepernick’s Protest Was Its Destruction

Donald Trump’s intervention brought the debate over Colin Kaepernick’s national anthem protest to a boil, but drained its meaning.

Colin Kaepernick’s protest during the U.S. national anthem was originally intended to make a statement about state-sanctioned lethal violence against black people. But conservatives, liberals, NFL team owners, athletes, fans, and celebrities, among others, have in a variety of ways co-opted and diluted the demonstration. Once President Donald Trump noisily injected himself into the flap, this derailment and dilution officially peaked. The national conversation, while louder than ever, may be irretrievably off-message.

No one even noticed the first two times Kaepernick sat for the anthem in August 2016. After the third instance, though, Kaepernick was asked about his protest. “I am not going to stand up to show pride in a flag for a country that oppresses black people and people of color,” he said. Amid the ensuing controversy, Kaepernick parted ways with his team, the 49ers, at the end of last season and remains unsigned.

For more than a year, despite the attention, shows of support from Kaepernick’s fellow NFL players were relatively few and scattered. That changed on September 22 when Trump addressed a crowd at a rally in Alabama. Trump told the crowd, “Wouldn’t you love to see one of these NFL owners, when somebody disrespects our flag, to say, ‘Get that son of a bitch off the field right now! Out! He’s fired!’” Days later, on Twitter, Trump cast his opposition as being “about respect for our Country, Flag and National Anthem.”

Trump’s remarks succeeded in singlehandedly shifting the discourse around Kaepernick’s protest. Whether it was a masterstroke or he stumbled into it, Trump turned the #TakeAKnee protests into a circus that rendered the gesture impotent.

The national debate was no longer about the state-sanctioned murder of black people. Instead, it became the type of liberal-versus-conservative culture war bickering that typically dominates the news cycle. Talking heads began debating the issue in terms of free speech, anti-Trump #resistance talk. Think pieces popped up expounding on whether patriotic displays belong at NFL games, and how much the NFL was paid by the government to have them.

Before Trump’s statements, Kaepernick’s protest didn’t fit into a neat partisan framing. He had begun his silent demonstrations under Barack Obama, a black Democratic president. Kaepernick said it “didn’t really matter” to him whether Trump or Hillary Clinton won, since neither showed any real commitment to addressing his concerns. Bill Maher called him “a fucking idiot” for creating what he called a false equivalency between the two presidential candidates. 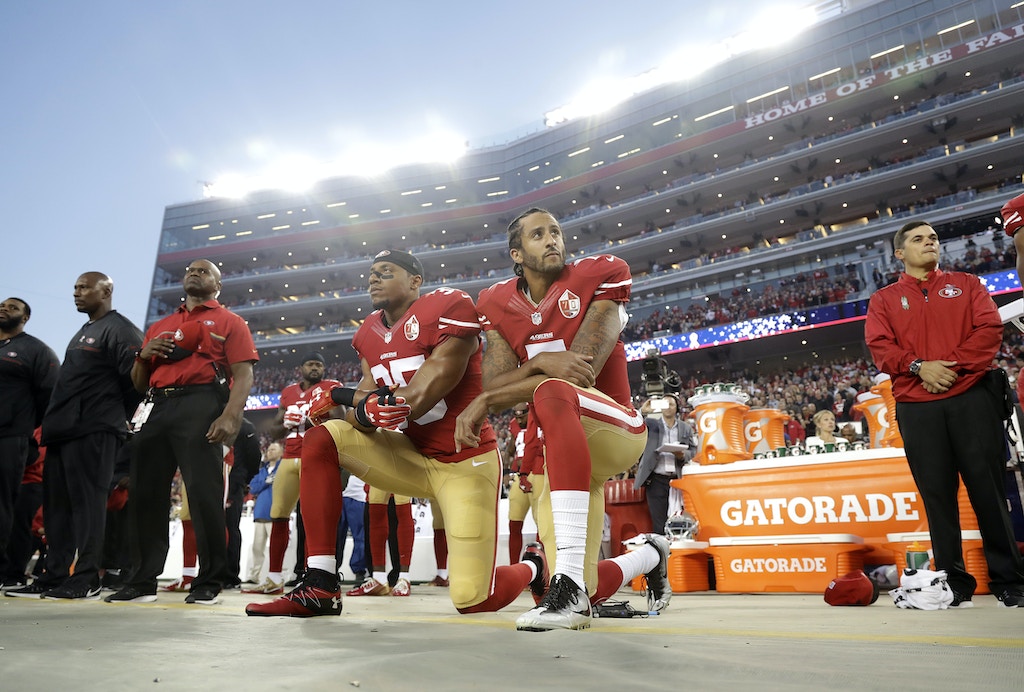 Now, however, Democrats are using the protest to score partisan points against Trump. For mainstream liberals, Trump’s intervention turned #TakeaKnee into the new #IceBucketChallenge.

Many of the displays of resistance shown by some players and the suddenly politicized team owners have just resulted in meaningless optics. Ahead of the unprecedented protest in the third week of the season, NFL commissioner Roger Goodell gave a wishy-washy statement about divisiveness and how great the NFL is; almost all the teams followed suit, mentioning unity, free speech, and attacking Trump for his tone. And while some teams, like the Seattle Seahawks, mentioned “injustice that has plagued people of color in this country,” there were few mentions overall of white supremacy or black victims of state violence. Many teams didn’t even mention race at all, except a few that gave a passing mention to “diversity.”

The omission made it clear that Kaepernick’s persona non grata status would stay in place. Trump’s true transgression in the eyes of the NFL executives, it seems, was to embarrass them by telling them how to run their gilded plantations. As Shaun King pointed out, the executives issuing these statements have been more than willing to echo Trump’s sentiments — and worse — when allowed to remain anonymous.

Hundreds of players chose to show solidarity, but without kneeling for the anthem. Many stood and locked arms during the anthem; others knelt before the anthem and rose once the song started. An estimated 200 players, however, went all the way, taking the knee, sitting, or raising their fists during the anthem itself. None of the owners joined these players to kneel during the song.

These forms of resistance that avoided kneeling during the anthem were so toothless that even Trump tweeted out his enthusiastic support. And why not? Dallas Cowboys owner Jerry Jones, who knelt before the anthem started and had donated $1 million to Trump’s inauguration committee, shares the president’s views on the protests, having in August said he feels “so strongly” that his players must stand for the anthem.

And while many of the players joining the protest stayed on message with Kaepernick, some of the newcomers dwelled on how Trump depicted them as powerless labor and insulted them — and their mothers — with the term “son of a bitch.”

As the objections to Trump spread among stars from other sports, one big-ticket name stood out: LeBron James. James’s tweet calling Trump a “bum” went viral, but his remarks showed his entry into the debate was ultimately misguided, framing the issue around Trump’s tone, divisiveness, and lack of respect for the players.

James’s attack on Trump exemplified the hollow sentiments of solidarity from those who, like Kaepernick, have taken the bull by the horns — and been gored. Whereas Kaepernick refused to take a side in the presidential election, James campaigned for Clinton. And while going after a widely reviled right-wing president is easy, James sidestepped when asked in December 2015 about the protests riling Cleveland over the fatal police shooting of 12-year-old Tamir Rice. “I haven’t really been on top of this issue,” James said, when confronted about activists’ pleas to join a campaign on Twitter. “So, it’s hard for me to comment.”

Kaepernick, meanwhile, has been erased so completely that he wasn’t even included on the all-star Sports Illustrated cover depicting the protest. “A Nation Divided, Sports United,” the cover said. Goodell, the man who runs the league that blackballed Kaepernick, was right there, in the front row with LeBron James.

Top photo: Buffalo Bills players kneel during the national anthem before an NFL game against the Denver Broncos on Sept. 24, 2017 at New Era Field in Orchard Park, N.Y.