Deregulation is often pushed as a way to boost the economy, but it may actually be costing jobs. 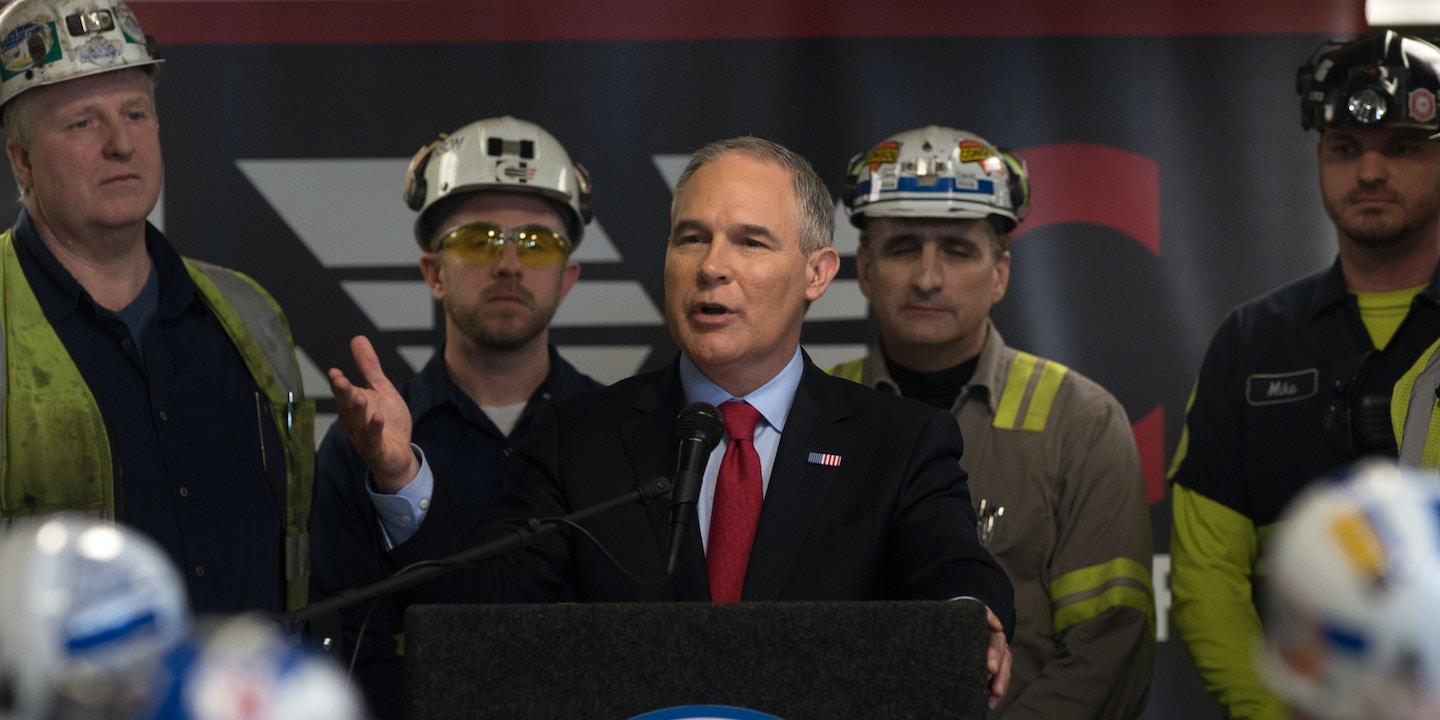 President Donald Trump and Environmental Protection Agency head Scott Pruitt have a go-to argument they lean on when pushing for repeal of the Clean Power Plan or other government regulation: The red tape is costing America jobs.

To get the economy humming, Pruitt on Monday announced that his agency would take formal steps toward repealing the Clean Power Plan, the Obama-era suite of rules meant to scale down U.S. greenhouse gas emissions. “The war on coal is over,” Pruitt boasted to a crowd of coal miners in Hazard, Kentucky, this morning. “The EPA and no federal agency should ever use its authority to say to you, ‘We are going to declare war on any sector of our economy.’”

Pruitt may be right about a connection between climate change policy and jobs, but he seems to have it backward. The United States shed 33,000 jobs in September, ending a seven-year streak in U.S. jobs growth — the longest-ever in U.S. history. Two of the main causes of that reversal?

As Economic Policy Institute Senior Economist Elise Gould wrote, the drop-off in unemployment “was almost certainly due to Hurricane Irma, which struck smack in the middle of the reference period, and the aftermath of Hurricane Harvey.” Over the phone, she told The Intercept that the storms had “a larger effect than I would have expected.”

While drawing direct correlations between warming and any single storm is virtually impossible, rising temperatures almost certainly shaped both Irma and Harvey. Each benefited from unusually warm waters in the seas where they brewed. The fact that sea levels are higher than they were just a few decades ago also makes storm surges higher. Worth noting as well is that Harvey was the third “once-in-500-year” flooding event Houston had experienced in just three years.

It wasn’t all bad news from the Bureau of Labor Statistics, the federal body that collects employment statistics. Unemployment fell across race and ethnicity. Wages also grew by 2.9 percent over the same period, though Gould notes that this might be a misleading result of the storms. “Ordinarily that would seem like a nice boost,” she said, “but in the service sector, for instance, you had around 75,000 losses — greater than overall losses. That may be in part because workers who work in low-wage sectors like that are less likely to be counted as employed because they didn’t work any shifts in that period. If you take a bunch of low-wage workers off the market, it brings wage numbers up.”

Storms in general tend to hit low-wage workers the hardest, and not just in BLS accounting. On top of the hardship caused by wages lost by shuttered or destroyed workplaces, poorer workers and the unemployed have a much harder time relocating away from areas vulnerable to storm damage, let alone rebuilding after the fact — either in shouldering costs up front or in navigating the kinds of lengthy red tape required to get substantial aid from the Federal Emergency Management Agency.

Gould did caution against jumping to conclusions about September’s jobs figures too soon. “There’s a lot of taking with a grain of salt in this whole report,” she said and advised holding off on any scaremongering about recent unemployment data until more is available. “I don’t think any decisions should be made based on this report,” Gould told The Intercept. State-level jobs numbers, she noted, could show an uptick in industries, like construction, as rebuilding efforts get underway in Texas and Florida, though those figures have yet to surface in national statistics. (Notably, national jobs figures from the BLS do not show employment levels in Puerto Rico, which will appear in state-level reporting.)

So what can be made of this month’s jobs report and its relationship to our warming world? It’s not the case that climate change is already wreaking untold havoc on our economy: The economic shocks of Irma and Harvey are confined to specific areas, and climate-fueled storms have not somehow triggered a massive spike in unemployment, which remains around 4.2 percent. For any number of reasons, jobs figures themselves can be fickle; we’ll have to wait and see whether last month’s losses point to a longer term decline. And even if it is the case that unemployment is ticking upward, the main culprit likely won’t be a hurricane.

What the BLS did give us is a sign of things to come. Reading between the lines of last week’s report shows thousands of people thrown out of work by decidedly unnatural disasters, lives shattered by lost homes and lost paychecks, and climate impacts that fall unevenly. As the poorest Americans get hit hardest, the richest — corporations, developers, and more — could start swooping in as they did after Katrina to turn a profit from the wreckage, making the cities rebuilt after a storm still more unequal than the ones that preceded them.

Larger-scale economic impacts from climate change are also on the horizon. Worldwide, climate change could cost world governments as much as $8 trillion by 2030. Running 29,000 simulations based on the economic impacts of past weather events (droughts, floods, hurricanes, etc.), the authors of another recent study in the journal Science found that a worst-case scenario climate impact — 6 degrees Celsius of warming — could drive down GDP in the U.S. by as much as six points by the end of the century. “When you start changing the climate,” one of the report’s authors told NPR in June, “it starts affecting all these aspects of the economy, and it makes the future world harder to predict.”

Trump, meanwhile, is only making the situation worse. Just 100 companies — many of them fossil fuel producers and utilities — have been responsible for 71 percent of atmospheric warming since 1988. While Republicans go out of their way to give many of those same companies handouts in the name of job creation, their competitors are putting more people to work. Growth in the renewables sector has far outpaced that in the traditional fuel sectors Trump is keen to support, with solar alone adding jobs 17 percent faster than the economy as a whole. As of earlier this summer, there were 374,000 people employed in the solar industry, as opposed to 362,000 in natural gas. Coal jobs, by contrast, have declined steadily over the last few years as the industry has struggled financially. Moreover, there are potentially millions of jobs to be had — for coal miners and many others — in the transition away from fossil fuels and the construction of a low-carbon economy. Puerto Rico, for instance, could take advantage of plentiful sun and reliable easterly winds to reshape its energy economy.

So far, Trump has been predictably quiet about the latest jobs report, though officials were eager to conclude that bad jobs numbers could be chalked up entirely to the storms. National Economic Council Director Gary Cohn said he was “excited” about the numbers,” adding that “there is some noise in the number because of the hurricane, and as you said you discount that noise out.” The question is how much longer the GOP can discount the economic effects of the storms its regulatory rollbacks are helping feed.