Did Trump Break the Law by Telling NFL Owners to Fire Players? 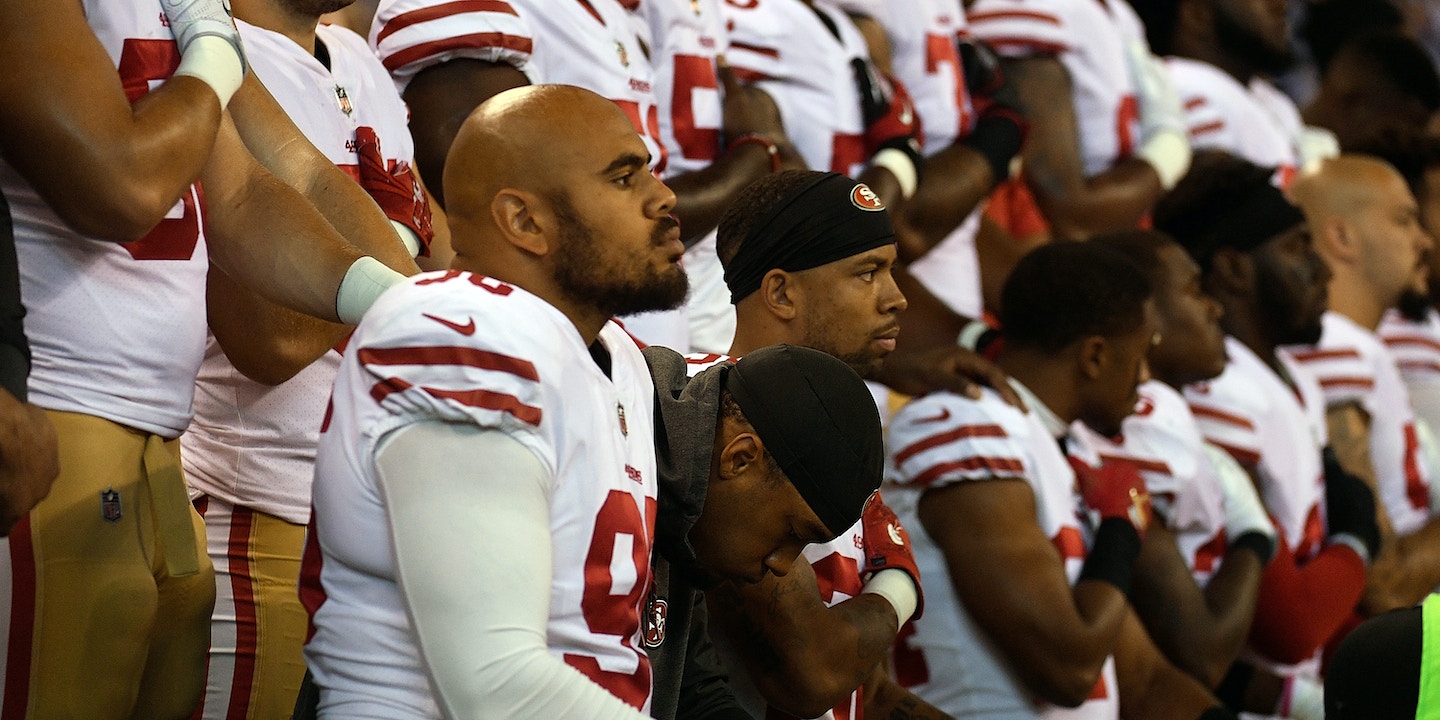 Two different NFL teams, the Miami Dolphins and the Dallas Cowboys, have now publicized that they are forcing their players to stand for the national anthem or risk punishment from the team. There are rumblings among players for other teams that their outfits have already done or are about to do the exact same thing. In doing so, these teams are caving to the very public demands of the president of the United States — and questions have been raised about whether Donald Trump may have broken the law in issuing these demands. Let me break it down.

For months on end, Trump demeaned NFL players who took a knee during the national anthem to protest police brutality and racial violence in America. But his complaints hit a crescendo last month at a political rally in Alabama when he not only described kneeling players as sons of bitches, but said that they should be yanked off the field. Capitalizing on the political momentum and attention he received from the remarks, Trump has now either commented or tweeted about the NFL nonstop for weeks on end.

Colin Kaepernick, however, still does not have a job. And police brutality and racial violence continue unabated in this country. That’s why these men are taking a knee or having a seat during the anthem. It’s why these men are raising a fist. These men aren’t disrespecting the flag or the military — in fact, some of them come from military families. What they are saying is actually patriotic: Every single player protesting has repeatedly said they want this country to uphold its promises and live up to its ideals.

Trump and Vice President Mike Pence, though, saw an opportunity to hijack the demonstrations. Last weekend, they orchestrated a publicity stunt, with Pence going to an Indianapolis Colts game, only to deliberately make a spectacle by walking out after players from the visiting 49ers took a knee. Trump acknowledged that the president had told Pence to walk out if any players took a knee, but at least one player from the 49ers has taken a knee in every game for the past 14 months. They knew this was going to happen.

On September 27, weeks before Cowboys owner Jerry Jones made it clear that he would bench players who did not stand for the anthem, Trump tweeted about a conversation he had with Jones. In an interview on Monday with NFL analyst Chris Mortensen, Jones admitted that Trump had reminded him of the mechanism he used to beat back the players’ demonstration. Trump then congratulated Jones for agreeing to bench players who did protest.

This is how Trump’s bullying works — but not without a few fascinating wrinkles. One comes courtesy of Chris Long of the Philadelphia Eagles, son of NFL legend Howie Long, who tweeted a suggestion on Monday that Trump might be breaking the law. Here’s the tweet:

https://t.co/ruDf7iWwez
I'm no more a law expert than he is a world leader but this sounds familiar.

What Long linked to was U.S. Code, Title 18, Part 1, Chapter 11, Section 227, which is titled, “Wrongfully influencing a private entity’s employment decisions by a Member of Congress or an officer or employee of the legislative or executive branch.” It states:

(a) Whoever, being a covered government person, with the intent to influence, solely on the basis of partisan political affiliation, an employment decision or employment practice of any private entity —

(1) takes or withholds, or offers or threatens to take or withhold, an official act, or

(2) influences, or offers or threatens to influence, the official act of another, shall be fined under this title or imprisoned for not more than 15 years, or both, and may be disqualified from holding any office of honor, trust, or profit under the United States.

(b) In this section, the term “covered government person” means —

(1) a Senator or Representative in, or a Delegate or Resident Commissioner to, the Congress;

(2) an employee of either House of Congress; or

(3) the President, Vice President, an employee of the United States Postal Service or the Postal Regulatory Commission, or any other executive branch employee (as such term is defined under section 2105 of title 5, United States Code).

Like Chris Long, I’m not an attorney, but I can read, and this damn sure sounds exactly what Trump has done to influence team owners in the NFL. The question is whether Trump’s actions represent “official acts” — which the law defines as official government actions — for Trump’s anti-NFL push to be a violation of the law. His actions are unethical at best, but could be illegal, too.

What’s inarguable is that the president of the United States is clearly violating the spirit of the law: He is using his influence, and even threats, to impact employment decisions by NFL team owners and the league commissioner. Not only has he called them out from the stage and in interviews, but he has called them out on his huge social media platform. Furthermore, he has openly admitted to having phone calls with team owners on the subject, and then congratulated them when they came forward to take the position he wanted them to take.

Yesterday, Trump tweeted that maybe the NFL should lose the tax breaks the league and teams have at times received:

Shortly afterward, the NFL sent out a memo, in which the NFL commissioner, for the first time, made it clear he wants every player to stand for the national anthem. Trump was ecstatic.

At least one of Trump’s most influential supporters, the disgraced Fox News commentator Eric Bolling, suggested Trump’s online threats against NFL as the primary reason the league had a very public shift on the issue. In other words, Bolling seems to believe Trump influenced the NFL’s policies and practices.

At every sporting event in this country, thousands of people can be seen ignoring the anthem, buying refreshments, talking on their cellphones, and taking bathroom breaks. Trump doesn’t care about that. A player from the Houston Astros was just photographed wearing American flag underwear, which apparently violated the U.S. Flag Code, while celebrating players drenched him in alcohol. Not a single person in this country believes Trump is about to call out the Astros or call that player a son of a bitch.

That’s because, for Trump, none of this is about the flag or the anthem. It’s about anti-blackness and the culture war. That’s why, in the NBA, San Antonio Spurs coach Gregg Popovich can call out Trump, by name, over and over again, and Trump won’t even mention him. Popovich is not only white but also a revered legend in Texas. And yet Trump strangely called out Stephen Curry from the Warriors — but not his coach, Steve Kerr, who has called Trump out by name several times. Trump is looking for opponents and enemies from the sports world that will excite his base. Yesterday, he called out ESPN’s Jemele Hill, a black woman.

In the scheme of all that Trump has done, it’s easy to dismiss his violation of the spirit of the law as small potatoes, but such a dismissal is a troubling sign of our times. It appears that Trump is able to say or do whatever he wants.

Top photo: Xavier Cooper (96) joins kneeling team members of the San Francisco 49ers during the National Anthem during an NFL football game on Oct. 8, 2017 in Indianapolis.