The Republican senator has built credentials around the same worldview he had as a young man. Don’t be fooled. Update: November 30, 2017
This story was updated to include the imminent possibility of Cotton’s takeover of the CIA.

A reshuffling of President Trump’s foreign policy apparatus, reported by The New York Times on Thursday, would see Secretary of State Rex Tillerson ushered out the door, to be replaced by current director of the CIA, Mike Pompeo.

That opening at the CIA would, in turn, be filled by Tom Cotton, a Republican senator from Arkansas.

Is there a more dangerous member of Congress than Tom Cotton?

The hawkish Republican senator and former U.S. Army captain has never hidden his relentless obsession with confronting Iran. He has led the charge on Capitol Hill to dismantle the nuclear deal with the Islamic Republic while constantly banging the drum for tougher sanctions and even airstrikes against Iranian nuclear facilities. With apologies to Winston Churchill, Cotton wants “war-war” not “jaw-jaw” — and he seems to have won over the know-nothing president of the United States. Last week, President Donald Trump refused to certify to Congress that the Iran nuclear deal is in the U.S. national interest and warned that U.S participation in that agreement could “be cancelled by me, as president, at any time.”

You might call Cotton, who is now being touted as the next director of the CIA, the “Trump whisperer.” In fact, according to the Weekly Standard, in a recent meeting with his top national security and foreign policy advisers, “having failed to receive the decertification option from his own team, Trump called Senator Tom Cotton and put him on speakerphone. The president asked Cotton to make the case for decertifying the Iran deal. Cotton took five minutes and walked Trump and his team through the case, emphasizing one point in particular: re-certifying the deal would be declaring that it was in the national security interest of the United States, something Cotton understood that Trump didn’t believe.”

The Weekly Standard report added that Trump “left the phone call” convinced that the decision to decertify was “the right one.”

Got that? The reality TV star who now occupies the Oval Office defied the advice of his own inner circle, including Defense Secretary James Mattis; ignored the pleas of America’s closest allies; and dismissed the evidence offered by the International Atomic Energy Agency that Iran is in compliance with the terms of the deal. Instead, he decided to go with the advice of a 40-year-old freshman senator from Arkansas, who has zero expertise in Middle East diplomacy and none in the field of nuclear proliferation.

If Cotton’s service in Iraq is being held up as evidence of his patriotism, then all to the good. But patrolling dangerous neighborhoods in Baghdad is not the equivalent of a training in foreign policy, just as serving as a deckhand on a ship isn’t much of an education in ship building. And it can’t be said that by living hard realities Cotton was drawn to his ultra-conservative politics. No, he’s been an outspoken conservative since he arrived on Harvard’s college campus. Cotton gives the impression of the type of right-wing student who loved little more than to debate and enrage liberals, arming himself with as many factoids as possible to embarrass his hapless opponent. He started as a young man with the view of the world he has today and built credentials around it. Don’t be fooled. 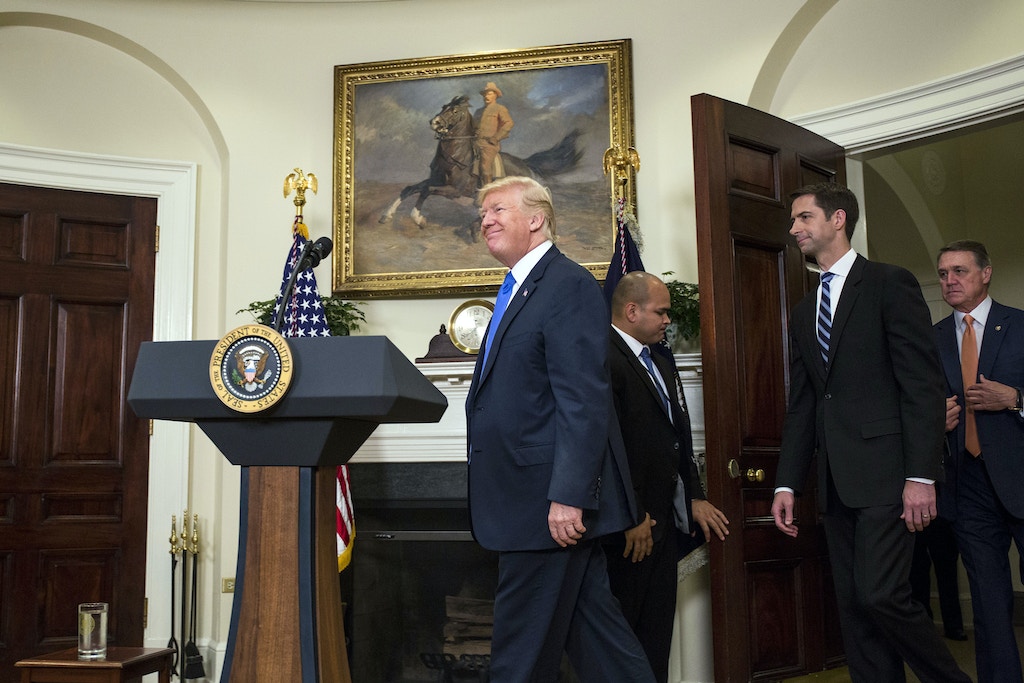 President Donald Trump and Sen. Tom Cotton, R-Ark., arrive for an announcement at the White House on Aug. 2, 2017 in Washington.

Lest we forget, this is the same Cotton who was accused of “treachery” and “mutiny” after penning a 2015 “open letter to the Leaders of the Islamic Republic of Iran,” in which he asked them effectively to ignore the foreign policy of the president of the United States, because the next one might undo it. “The next president could revoke such an executive agreement with the stroke of a pen and future Congresses could modify the terms of the agreement at any time,” he warned.

This is the same Cotton who compared the Iran nuclear negotiations to the “appeasement” of Nazi Germany in the 1930s; the same Cotton who shot to prominence in conservative circles after writing a letter to the New York Times from Iraq in 2006, calling for three of the paper’s journalists to be put “behind bars” for their coverage of a secret Bush administration program (one of those reporters, James Risen, is now a colleague of mine at The Intercept); the same Cotton who once said his only objection to Guantánamo Bay was that “there are too many empty beds”; the same Cotton who claims to enjoy eating birthday cake every day of the week. (OK, admittedly, this last point is not relevant to his knee-jerk hawkishness, but it’s still worth noting. What kind of maniac eats birthday cake every single day?)

In many ways, Cotton is the GOP foreign policy equivalent of House Speaker Paul Ryan: disingenuous, ignorant, and out of his depth, yet feted by the D.C. press corps as a Very Serious Person — a resume and a vocabulary as a substitute for seriousness.

There is, however, nothing serious about him — despite his two degrees from Harvard. Like Ryan, Cotton’s policy ideas fall apart the minute they are applied to the real world. “The policy of the United States should be regime change in Iran,” Cotton declared in June, before explaining how he believed the United States should “support internal domestic dissent” in Iran by backing minority ethnic groups, including Arabs, Turkmen, and Baloches, who “aren’t enthusiastic about living in a Persian Shia despotism.”

This is madness.  Have we forgotten how much blood was spilled in Iraq thanks to such a nakedly sectarian “divide and rule” strategy? Are we supposed to ignore the way in which outside powers stirred up “internal domestic dissent” in Syria, by arming and funding vicious jihadist groups?

Then again, though Cotton may now be the most hawkish senator in the United States — step aside John McCain and Lindsey Graham — we should perhaps thank him for his bluntness. Remember: Every time former President Barack Obama or a member of his administration framed the argument over the nuclear deal as a choice between diplomacy or war, Republicans would cry foul. This, they would say, was a false choice; critics of the deal merely wanted a better deal.

But Cotton is clear about regime change. He is clear about airstrikes. He is clear about wanting to crush Iran. Consider his recent remarks at the Council on Foreign Relations where, referring to the impact of sanctions on Iran’s economy, Cotton said: “One thing I learned in the Army is that when your opponent is on his knees, you drive him to the ground and choke him out,” later adding, “If they’re on their knees in surrender, then you accept their surrender.”

This is the kind of language you might expect from a tinpot African dictator trying to suppress a domestic revolt — or maybe from a teenager obsessed with playing “Call of Duty” on his Playstation — and not from a leading member of the Senate Armed Services Committee.

The idea that Iran is about to “surrender” to the United States anytime soon is laughable. Equally absurd is Cotton’s claim that “calibrated strikes” against the Islamic Republic, modeled on Bill Clinton’s Operation Desert Fox four-day bombing of Saddam Hussein’s Iraq in 1998, would put a halt to the Iranian nuclear program. “If we are forced to take action,” the senator told his audience at the CFR, “the United States has the ability to totally destroy Iran’s nuclear infrastructure.”

This is next-level stupidity. First, a preemptive strike on Iranian nuclear facilities would, in the words of former CIA director Gen. Michael Hayden, “guarantee that which we are trying to prevent – an Iran that will spare nothing to build a nuclear weapon and that would build it in secret.”

Second, it is impossible to “destroy Iran’s nuclear infrastructure” without invading and occupying the country, and rounding up and executing every single scientist working on the nuclear program.

Third, Iran in 2017 is not Iraq in 1998. Why wouldn’t the Iranians retaliate against U.S. interests, both in the region and beyond? How many U.S. lives is Cotton willing to sacrifice?

Perhaps the former U.S. Army captain and (maybe) future director of the CIA should have a quiet word with an actual expert: retired U.S. Marine Corps Gen. Anthony Zinni, who, as head of CENTCOM, organized Operation Desert Fox. Speaking about the potential fallout from a similar set of airstrikes against Iran, back in 2009, Zinni asked the following questions:

Zinni concluded his remarks with a stark warning to hawks like Cotton, who seem to have learned nothing and forgotten nothing: “Like I tell my friends, if you like Iraq and Afghanistan, you’ll love Iran.”